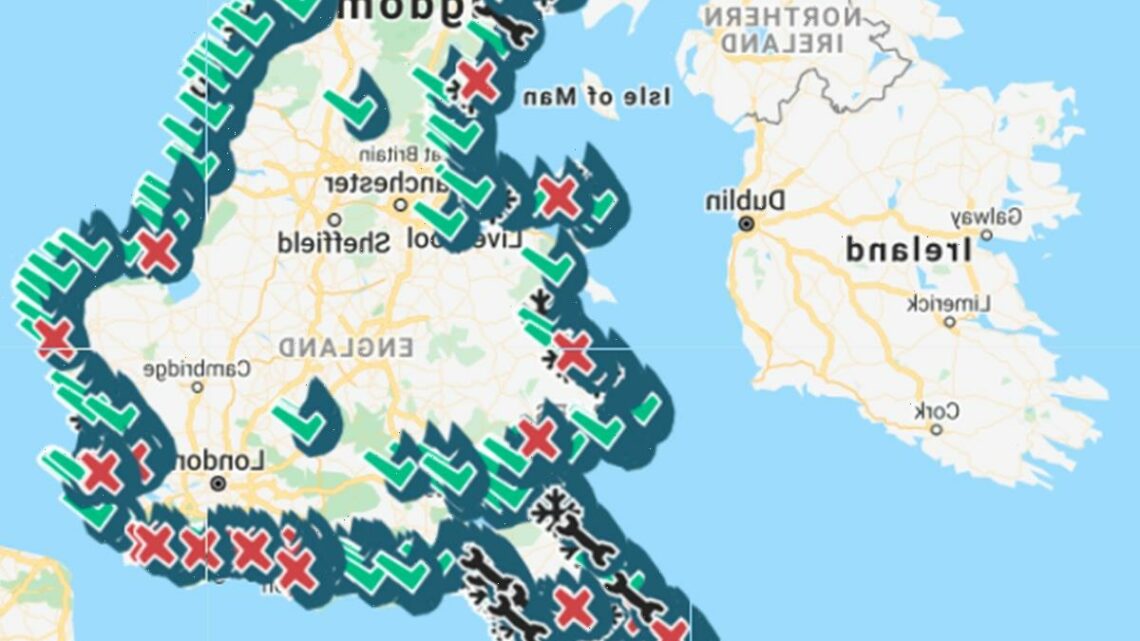 A SHOCKING map reveals Britain's most polluted areas where raw SEWAGE is pumped into our precious sea and rivers.

It coincides with a pollution uproar in Kent, where hundreds of tomatoes are growing on holiday beaches from seeds in human poo. 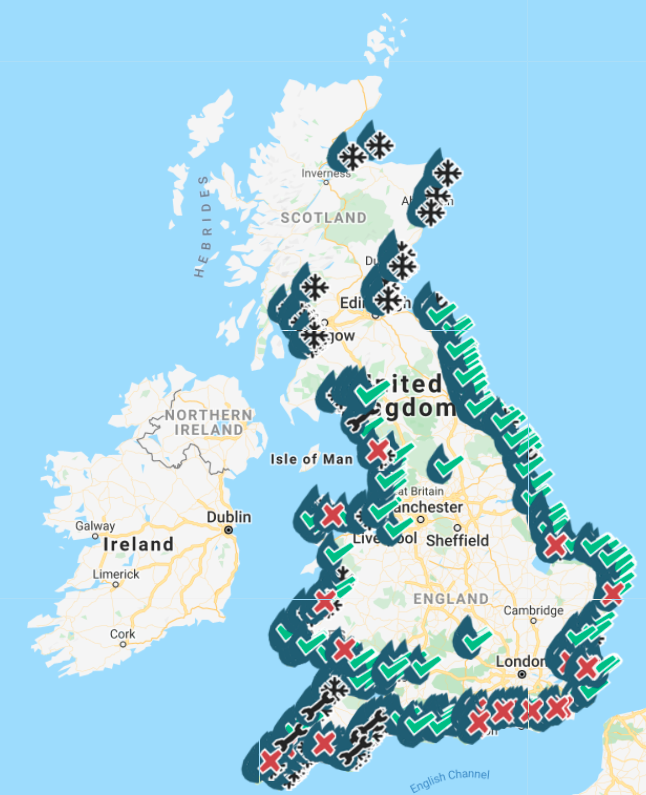 It monitors the water quality at over 400 locations around UK rivers and coastlines.

The marine conservation charity has spent years urging politicians to introduce a legal duty on water companies to stop discharging raw sewage into rivers and the ocean.

SAS said: "The government has the chance to address the sewage pollution scandal."

But campaigners were left reeling when, while debating the Environment Bill this month, MPs voted to continue allowing sewage to be dumped into waterways.

In England alone 84 per cent of rivers and lakes have failed to meet the government’s target of good ecological status, reported The Times.

SAS slammed the government's inaction, and said that accepting "400,000 sewage pollution events in a year doesn’t sound like very effective legislation to us".

Despite an amendment suggested in the House of Lords to beef up sewage discharge laws, the government "rejected" a push to "stop water companies exploiting legal loopholes and treating rivers and the ocean as open sewers", SAS added.

It said: "Putting this legal duty on water companies to take steps to reduce their reliance on sewage overflows could have made a real difference by forcing water companies to finally tackle their shocking sewage pollution record."

Allowing 400,000 sewage pollution events in a year doesn’t sound like very effective legislation to us.

An angry Hugo Tagholm, CEO of Surfers Against Sewage, asked: "Why wouldn’t they want water companies to have a legal obligation not to pollute our rivers and ocean with sewage.

"It beggars belief and hardly shows a commitment to be the greenest government ever."

However, the Government warned that it would cost up up to £600billion to upgrade the system, and would mean digging up gardens across the nation to sort out the Victorian water system.

After the vote sparked furore on social media, peers are on Tuesday expected to support an amendment submitted by the Duke of Wellington, requiring water companies to reduce water pollution.

If approved by the Lords tomorrow it will return to the Commons for a further vote, possibly on Thursday, said The Times.

The push to clean up Britain's waterways comes as Brits have reported the "stomach-churning" sight of tomatoes popping up in poop at Pegwell Bay in Kent.

Flushed into the sea from the sewage system linked to toilets, the tomato seeds have drifted on to the shore and are sprouting in rock pools and along sandy beaches where children play in the summertime.

But there's no rush to pick and eat the beach crop – as disgusted residents have described them as "poop tomatoes".

Alice Toney, 31, a mum-of-two living two miles from Pegwell Bay, said: "We were amazed to see tomatoes basically growing on the beach.

"It's worrying to think there are tomatoes growing there because they come from tomato pips in people's poo and they are being fertilised by the human sewage going into the sea.

"What other damage must it be doing to the environment? It's terrible and something should be done about it.

"I'm not keen to let my little ones run along the beach there if it is as polluted as this."

Earlier this year Southern Water was fined a record £90 million for deliberately pumping 16 to 21 billion litres of sewage into the sea between 2010 and 2015. 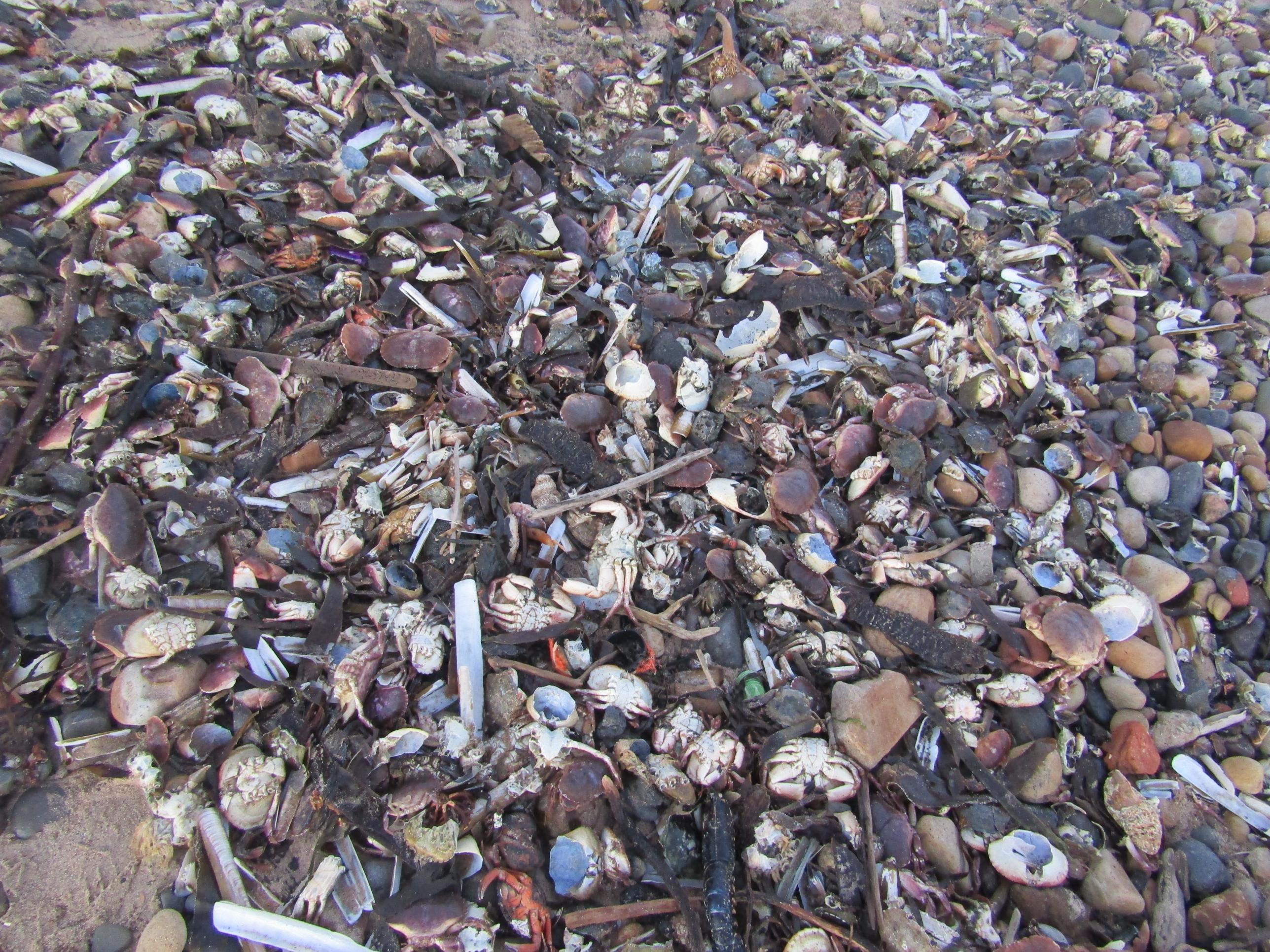 Can Blockchain Technology Solve The Cases of Document Fraud and Manipulation?