Sand is disappearing from one of Britain’s most popular beaches and has left power cables and rocks exposed.

The fine soft sand of the award-winning South Beach, Tenby, has washed away sparking fears it could vanish altogether in time.

The town attracts around 500,000 holidaymakers each year who have been drawn to the long sandy shores of its Blue Flag beach.

But tourism bosses fear they could be lost if urgent action is not taken to save the one-and-a-half mile-long beach.

Signs have been placed on the beach to warn of exposed cables, rocks and sandbags. 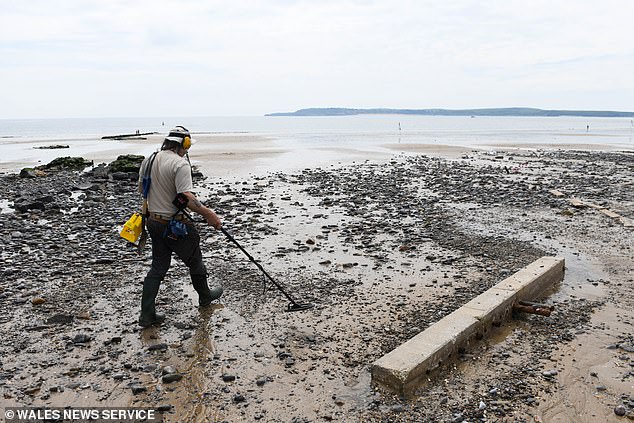 A man using his metal detector on South Beach, Tenby. Sand is disappearing from the beach, which attracts large numbers of tourists every year

Business owner Marianne O’Shea, who manages a seaside snack bar, said: ‘It is the worst I have seen in 20 years.’

Locals fear climate change or the removal of groynes from the beach could be to blame for the disappearing sand.

Groynes are structures that extends into the sea that aims to protect the shoreline from coastal erosion.

The groynes were removed by the Pembrokeshire Council in 2007 as they were deemed unsafe after one collapsed.

Council chiefs are hopeful the change is cyclical – and the sand will naturally return by summer.

Pembrokeshire Council’s coastal engineer Emyr Williams said: ‘It has happened before although I would admit that it’s particularly bad this year.

‘The sand will return eventually – probably in time for the school holidays.

‘The volumes of sand needed to build a decent beach here would be enormous – around ten million cubic metres at enormous expense and for no obvious benefit.’ 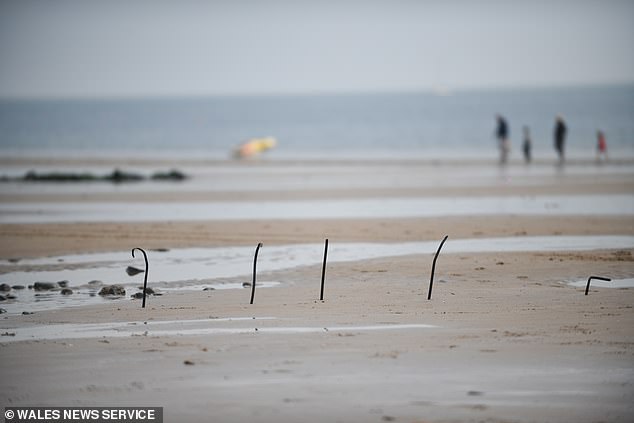