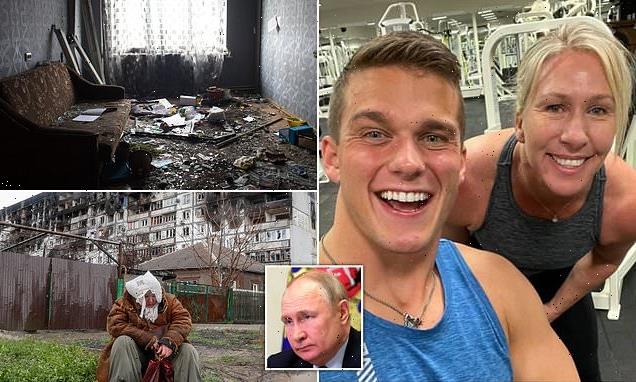 Russia ‘SANCTIONS 398 members of Congress’ – including Madison Cawthorn and Marjorie Taylor Greene: Kremlin hits back after Biden’s ‘unacceptable’ claims that Putin has committed ‘genocide’ in Ukraine

Russia’s Foreign Ministry is sanctioning 398 of the 435 members of the United States House of Representatives, Moscow-backed state media reported on Wednesday.

‘We categorically disagree and consider unacceptable any attempt to distort the situation in this way,’ Putin’s spokesman spokesperson Dmitry Peskov said on a conference call with reporters, according to Reuters.

He went on, ‘It is hardly acceptable for the president of the United States, a country that has committed well-known deeds in modern and recent history.’

Wednesday’s sanctions announcement is directly in retaliation for the Biden administration placing sanctions on 328 members of Russia’s Putin-influenced parliament known as the Duma.

The 398 U.S. lawmakers are members of the House of Representatives specifically, including the lower chamber’s leadership and committee chairs.

Republican Reps. Madison Cawthorn and Marjorie Taylor Greene, among a vocal minority in Congress who criticized Ukraine with points that seem eerily similar to the Kremlin’s, are also included on the ‘stop list.’

A list of 398 sanctioned lawmakers was posted to the Russian Foreign Ministry’s website with a statement that committee chairs and House leadership are also included.

Texas GOP Rep. Michael McCaul and Kentucky Republican Rep. Andy Barr are among those who are not committee chairs nor House leadership named on the list, though McCaul could be considered under sanctions as the ranking member of the Foreign Affairs committee. 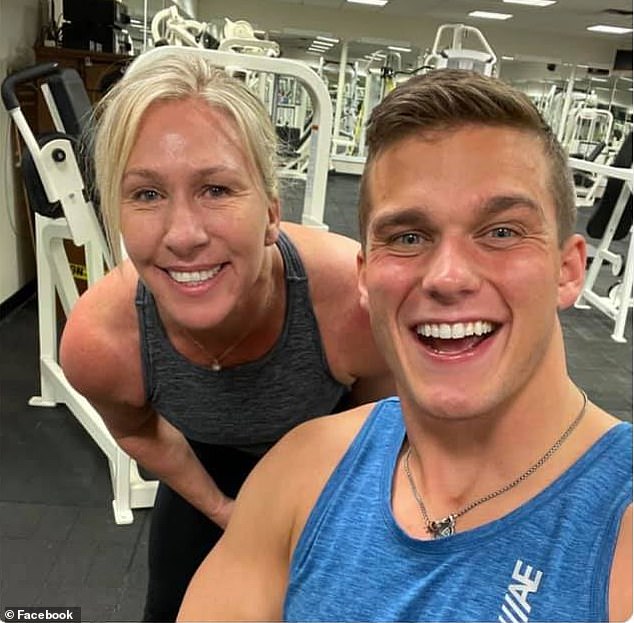 The 398 lawmakers sanctioned by the Kremlin on Wednesday all serve in the House of Representatives. Volodymyr Zelensky critics Marjorie Taylor Greene and Madison Cawthorn were also on the list

‘Along with other American legislators who were previously banned from entering Russia (like, for example, the Speaker of the House of Representatives Nancy Pelosi) all U.S. congressmen are ‘listed’ on a reciprocity basis,’ the statement reported by TASS News Agency read.

‘Oh no! Lol,’ Colorado Republican Rep. Doug Lamborn wrote on the platform. His fellow GOP lawmaker, Rep. John Curtis of Utah, said it was ‘an honor to be on this list.’ 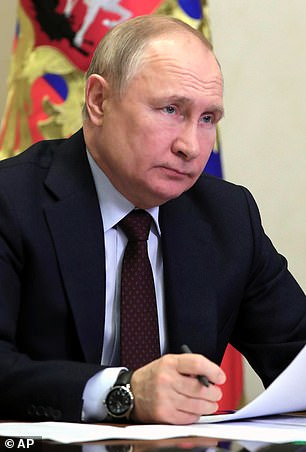 The Treasury Department brought down economic restrictions on the Duma toward the beginning of Biden’s late March trip to Europe to meet with western allies about the situation in Ukraine.

Russia has intensified its focus on Ukraine’s eastern regions in recent days.

The Kremlin spokesman’s reminder of the U.S.’s own ‘deeds’ echoes past Russian accusations of ‘war crimes’ in places like Iraq, Afghanistan and Yemen.

China recently parroted the same claims, as Putin and his troops face mounting war crime accusations of their own as atrocities allegedly committed in Bucha and other areas formerly occupied by Russian forces come to light as they retreat.

Images of civilians lying dead in the street with their hands bound behind their backs, stacks of burned and charred naked bodies as well as horrific survivor accounts of rape and torture have moved western leaders to amplify declarations that Putin is a war criminal. 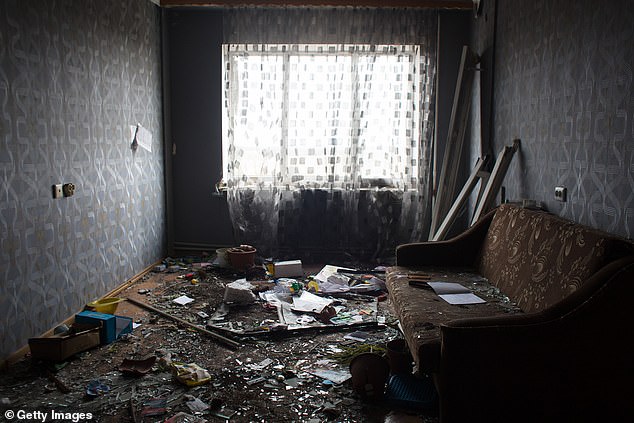 A view of a destroyed flat on April 13, 2022 in Borodianka, Ukraine. Rescue workers are still removing rubble from the destroyed residential area after the withdrawal of Russian troops during their invasion of Ukraine 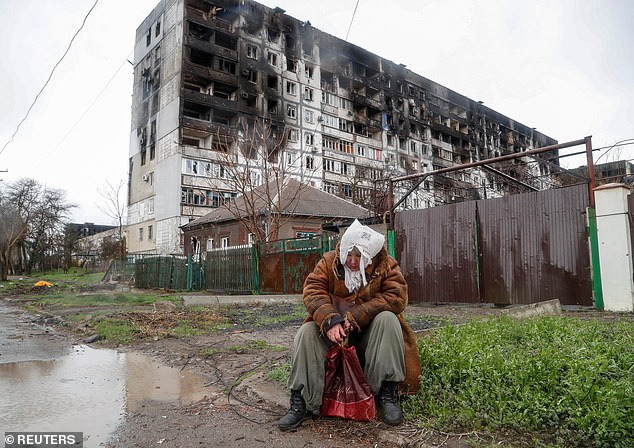 A woman sits in front of a residential building damaged in the course of Russia’s invasion, on a rainy day in the southern port city of Mariupol on April 13. Ukrainian officials said they are investigating reports of a chemical attack against their troops there 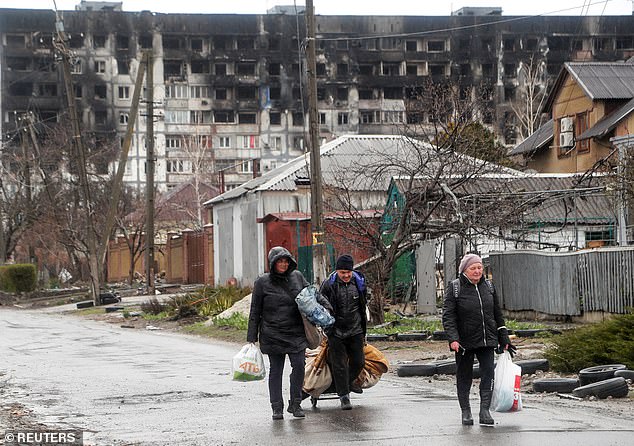 Mariupol has been under siege by Russia for weeks, with residents reportedly attempting to survive on dwindling food and water resources. Many have reportedly died from starvation already, according to Kyiv

It’s also given way to accusations of genocide, which Biden recently validated in comments to reporters.

Speaking an an event in Iowa while blaming ‘Putin’s price hike’ for rising inflation, Biden said: ‘Your family budget, your ability to fill up your tank — none of it should hinge on whether a dictator declares war and commits genocide a half a world away.’

The president stood by his comments when asked by reporters later in the day.

‘It’s become clearer and clearer that Putin is trying to wipe out the idea of being Ukrainian,’ Biden told the press before boarding Air Force One.

‘The evidence is mounting. It looks different than last week. More evidence is coming out, literally, of the horrible things that the Russians have done in Ukraine, and we’re gonna only learn more and more about the devastation’

The president added that it would ultimately be up to the legal definition as decided by human rights attorneys across the West, but whether he thought it was genocide, said ‘it sure seems that way to me.’

White House Press Secretary defended Biden’s remarks during her daily news briefing on Wednesday, claiming ‘He’s the President of the United States and the leader of the free world, he’s allowed to make his views known at any point he would like.’

On Tuesday Zelensky said Biden standing by his accusation of genocide reflects the ‘true words of a true leader.’

Putin issued his own chilling statement that day as well, claiming peace negotiations between his country and Ukraine were at a ‘dead end.’

Through it all Russia has denied the majority of its reported setbacks, include an apparent loss in the battle in control for Kyiv.

Putin on Tuesday insisted the mission was always targeting eastern Ukraine to ‘ensure Russia´s own security’ by helping pro-Russian rebels there.

He again referred to the war as a ‘special military operation’ and vowed it would ‘continue until its full completion and the fulfillment of the tasks that have been set.’

NFTs, a Short-lived Hype or the Definite Future of Art Ownership?