Rooneys' dreams of moving into £20m' mansion before Christmas dashed

EXCLUSIVE: Wayne and Coleen Rooney’s dreams of moving into new £20million ‘Morrisons’ mansion before Christmas in tatters as troubled four-year project is hit by MORE delays because WAG Coleen ‘keeps changing her mind over the interior designs’

Wayne and Coleen Rooney’s dreams of spending Christmas in their new £20million mansion have been dashed after a series of new set-backs on their troubled building project that has been dragging on for four years.

Work on the six bedroom country house – that has been mocked for resembling a Morrisons supermarket – ground  to a halt for several weeks during lockdown as building materials deliveries stopped during the pandemic.

Now the project has been hit by yet more delays – this time caused by Coleen changing her mind on interior designs on the sprawling property.

And new power cables are being throughout the estate for a new communications system, according to a source.

To add to the Rooneys’ woes, they have been forced to install a noisy, gas-powered ‘bird-scarer’ to stop crows from pecking at grass seeds that have been laid on lawns at the 40-acre site. 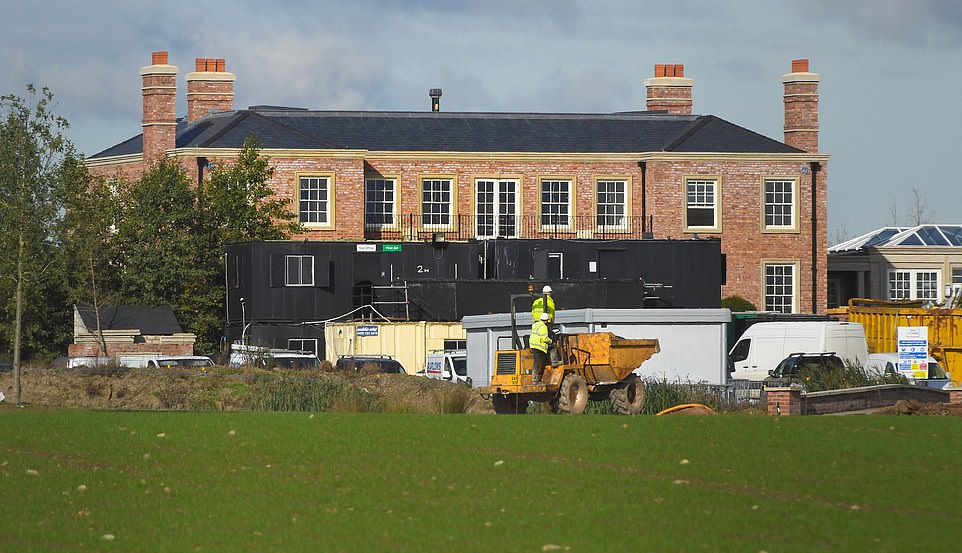 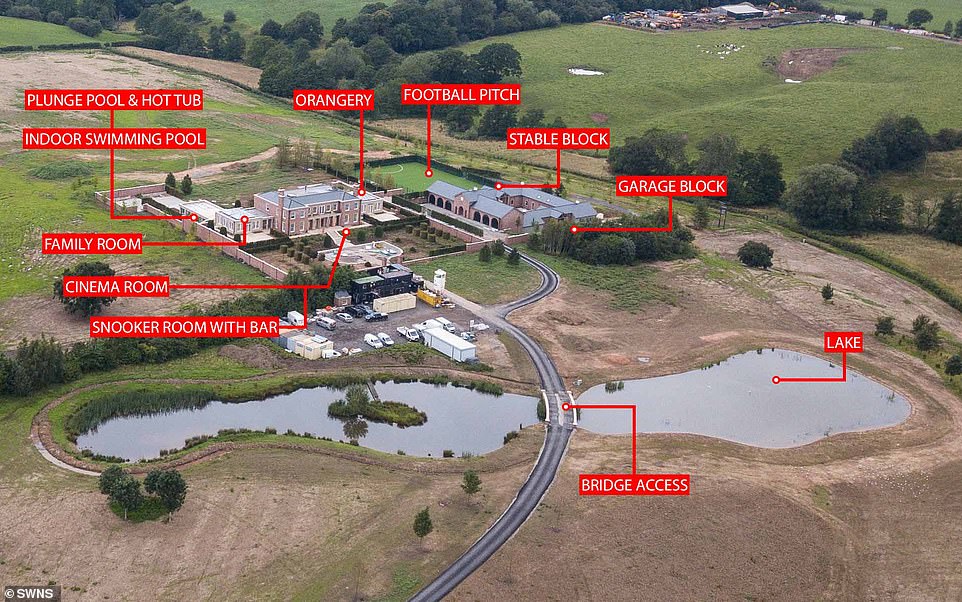 The six-bedroom mega mansion – where building began in 2017 – has been plagued by delays, particularly at the start of the coronavirus pandemic lockdown when building ground to a halt entirely when deliveries of building materials stopped 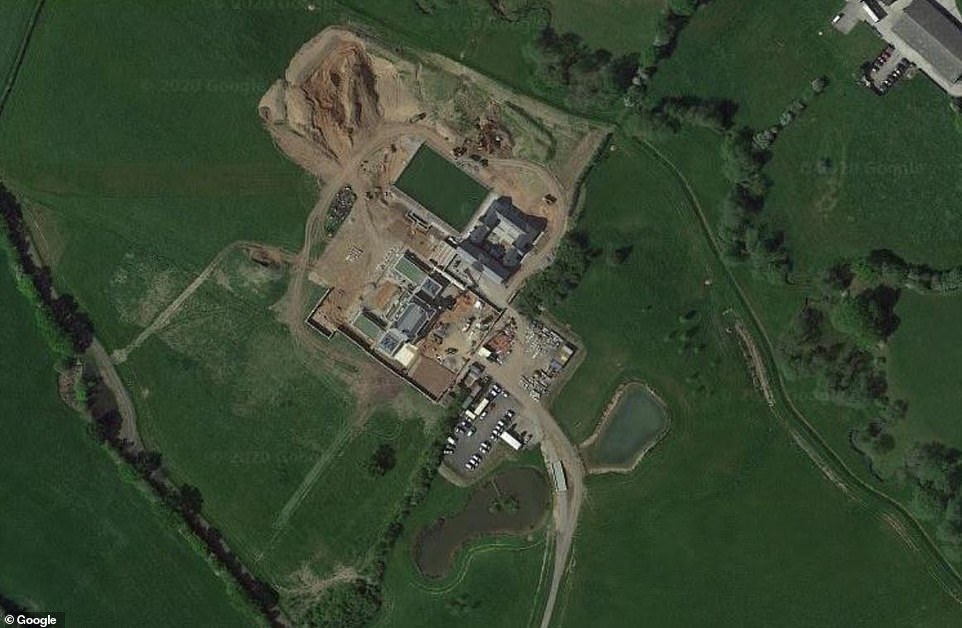 An aerial view shows the incredible project taking shape, albeit more slowly than the Rooneys had hoped. A source told MailOnline the couple have been patient with all the delays as they live in their £5m Prestbury home while work is carried out 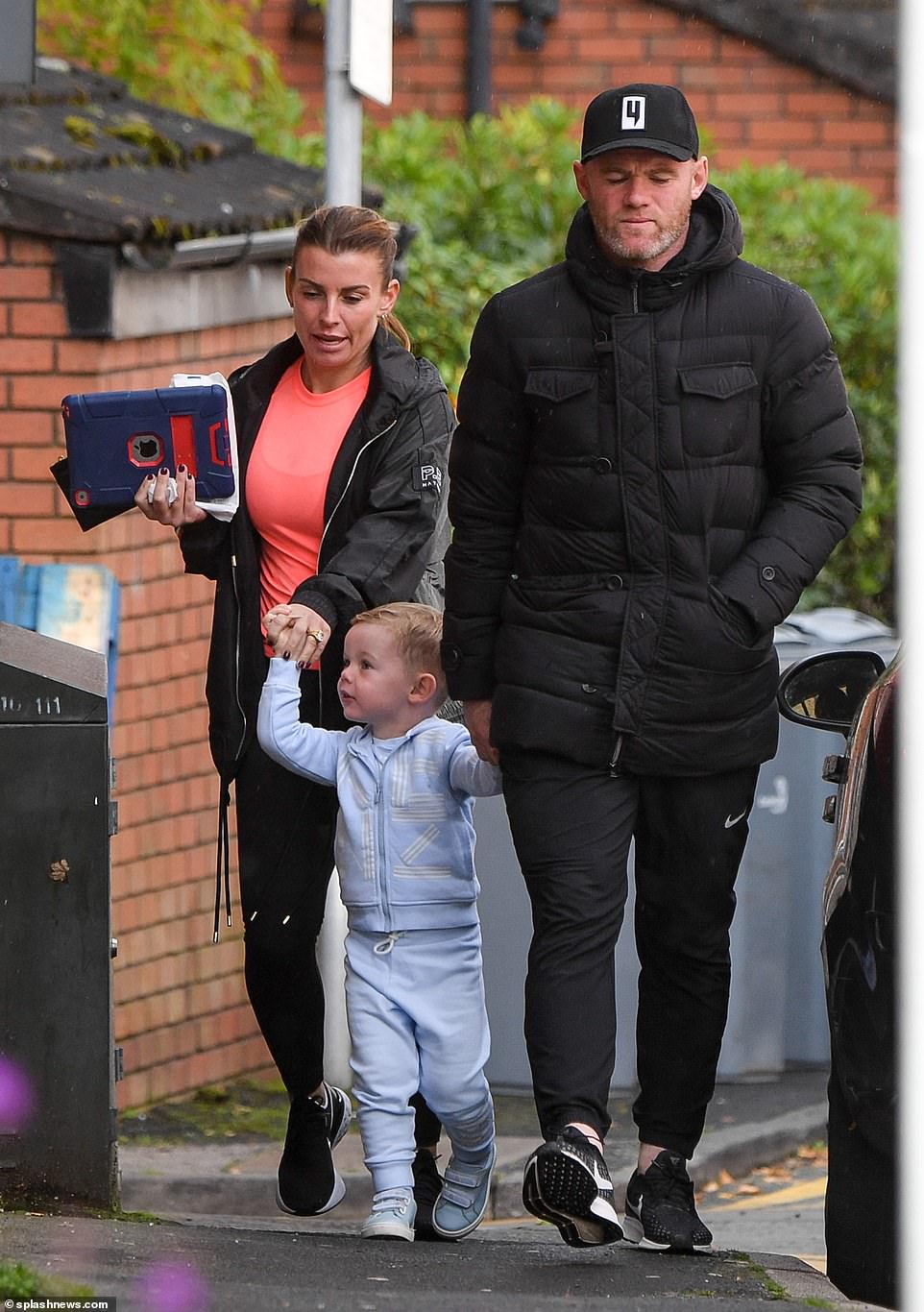 Wayne and Coleen, pictured recently with one of their four sons Cass, had pencilled in early this year as a moving in date. That was postponed until May, but when the pandemic hit progress a source now they will not be moving in before 2021

A source close to the couple told MailOnline they had originally pencilled in January of this year as their moving in date.

But with the pandemic and other issues that was delayed until May. Since the pandemic hit a more realistic date is January 2021 – at the earliest.

‘There have been constant changes with Coleen talking to the designers about the interior and fittings and everyone is doing their best to complete all the work as soon as possible,’ said the source.

‘The Rooneys come and go to see how things are coming along and they are very patient.’

The 34-year-old England legend and ex-Premier League star’s pad boasts an orangery, bar, TV room, snooker room, cinema and wine cellar, as well as a huge indoor swimming pool surrounded by a glass pavilion, a hot tub, steam room and ‘his’ and ‘hers’ changing rooms.

Work on the mansion came to a standstill in April due to concerns around building supply deliveries as lockdown restrictions came into full force.

But recent efforts to start landscaping the grounds around the sprawling three-storey house have hit problems from birds, so they have installed an airport-style automatic ‘bird-scarer’ to prevent grass seeds from being eaten.

The deafening blasts from the gas-powered scarer every 20 minutes have only added to the annoyance of well-heeled neighbours in the Cheshire countryside, already fed up with the drawn-out construction work.

Another bugbear for local residents are the state-of-the art security precautions around the property.

Several objected to the erection of a 9ft tall security fence ringing the estate, branding it an eyesore which would ‘urbanise’ the rural area. The planners sided with the Rooneys. 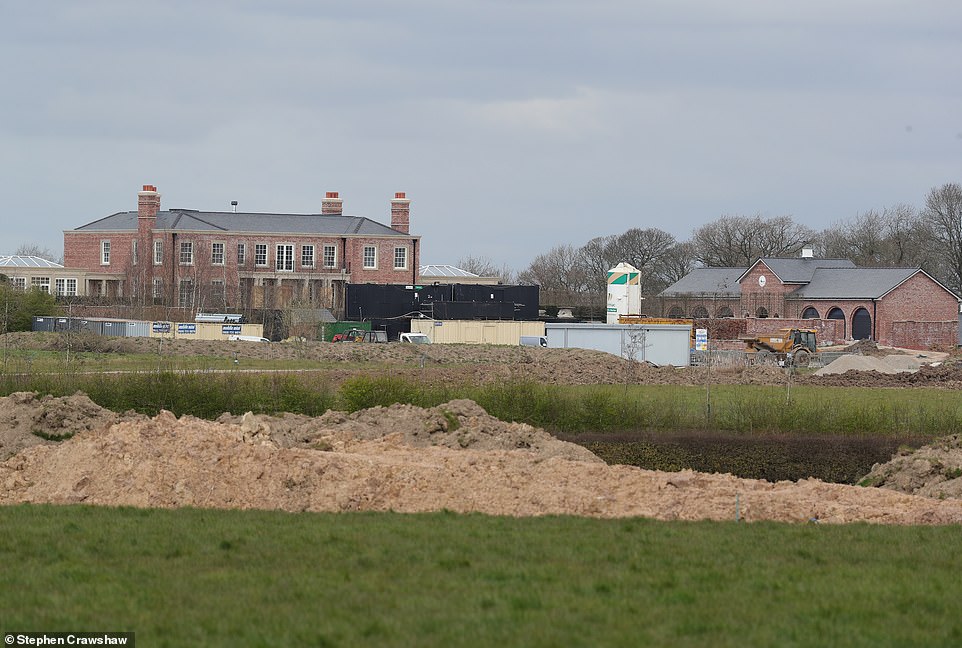 As well as all the building work to the six bedroom mansion in Knutsford, Cheshire, the Rooneys have been forced to install a noisy, gas-powered ‘bird-scarer’ to stop crows from pecking at grass seeds that have been laid on lawns at the 40-acre site 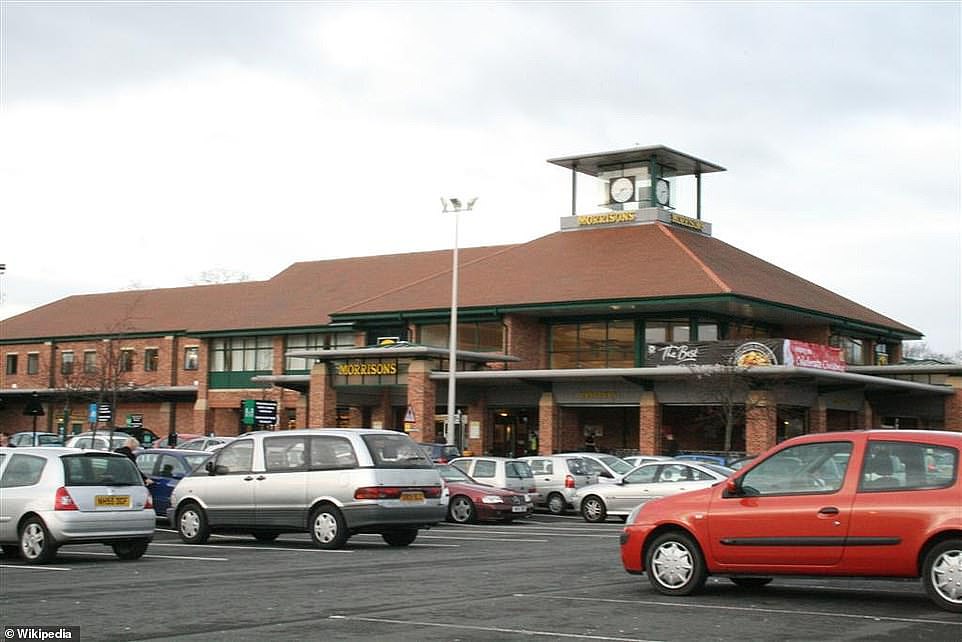 The Rooneys have been gently mocked over their state-of-the-art dream home complete with football pitch, snooker room, swimming pool and orangery has been 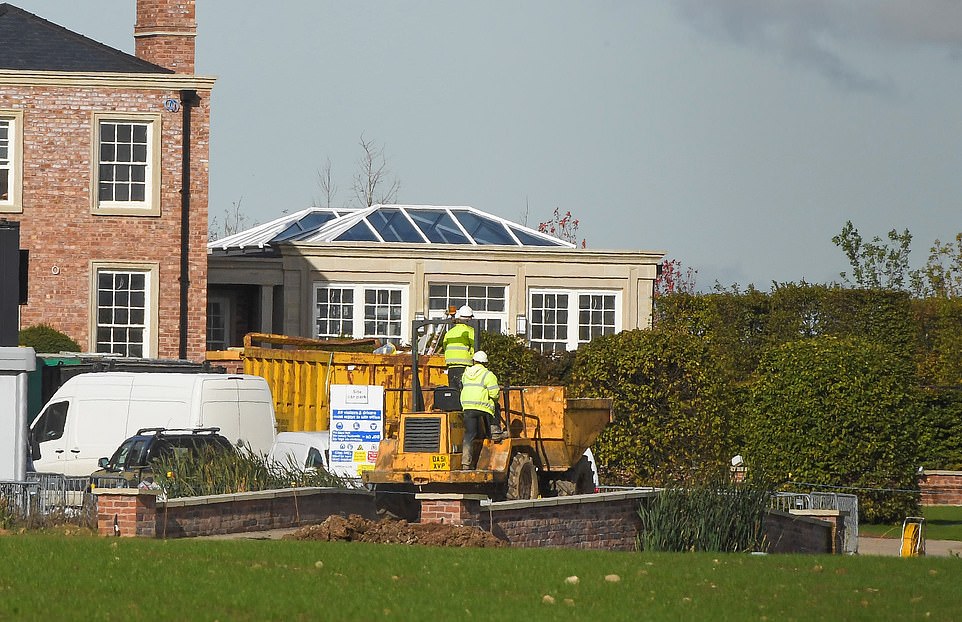 The house has been erected in the middle of fields, but a public footpath gives passers-by full view of the house.

Rooney has attempted to restrict sightings of his mansion by ordering workers to plant hundreds of thorny bushes along the perimeter fence to obscure the view.

A source said: ‘Coleen and her family had set their hearts set on moving in before Christmas. She said she wanted to be in for the festive period, but this is looking very unlikely.

‘There have been problems with birds eating grass seeds and a lot of cable work done in the grounds needs to be dug up too. 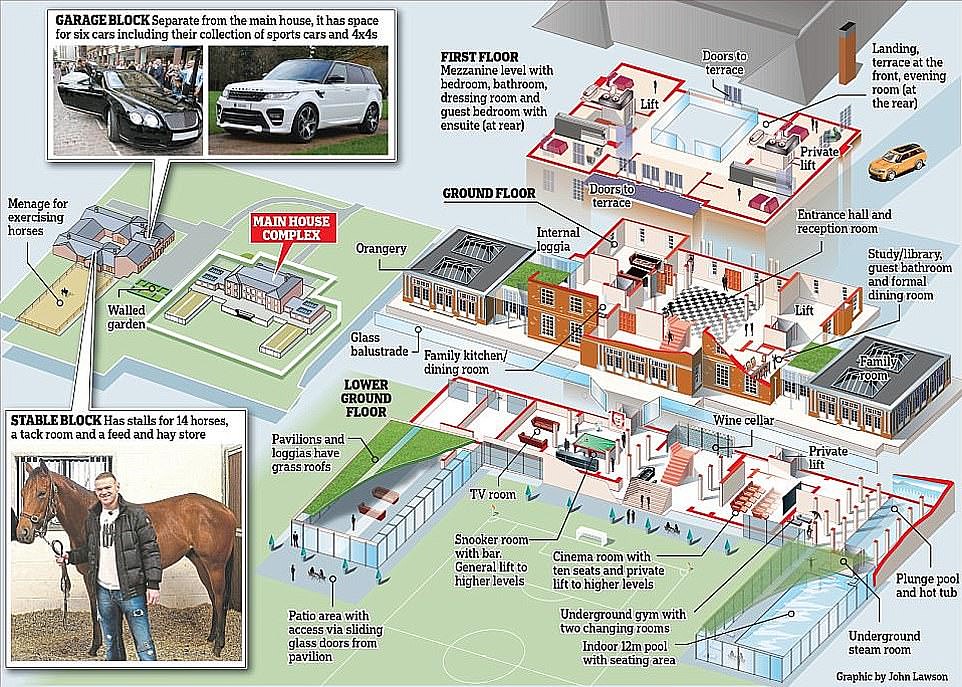 Plans show how the Rooneys purpose built new home comes with a football pitch, indoor swimming pool with plunge pool and hot tub, stables with stalls for 14 horses and a tack room as well a snooker room, cinema and underground steam room

The source added: ‘The bird-scarer has been brought in because Wayne wants to cover up some patchy areas on the lawn close to the fence.

‘When the thing was put in it did cause some people to jump because it sounds like a gun is being fired. The sound can be heard for miles, but the workers are used to it now.

The couple, and their four sons Kai, Klay, Kit and Cass have been staying in a £5m home at nearby Prestbury in Cheshire while the mansion is being built.

As if to emphasise that time is standing still on the project a large clock erected on the gable at one end of the mansion has stopped working. 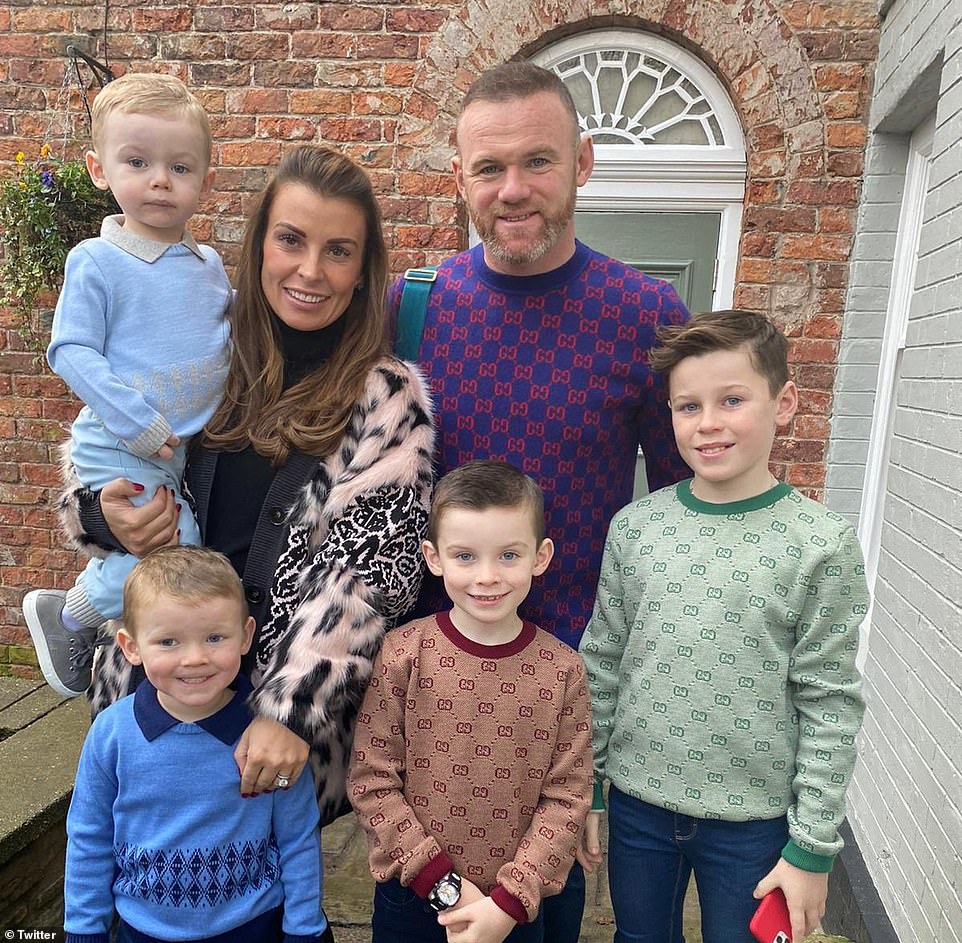 The land features a football pitch and man-made fishing lake and a bridge has been built across the ponds on the property to allow the Rooneys to be able to drive to the mansion.

Sources said the swimming pool had been installed along with six garages and an underground tunnel to the house from the car ports.

Safety precautions are a high priority for the Rooneys after the family suffered an attempted burglary at their old £6million home in 2016.

Shortly after acquiring the plot, the Rooneys entered a 22-month long planning row with locals who objected to the building of a farmer’s shed to house and tractor and hay bales. The dispute was settled in Rooney’s favour.

A spokesman for the former Manchester United and England captain, who currently plays for Derby County, declined to comment on the delays.