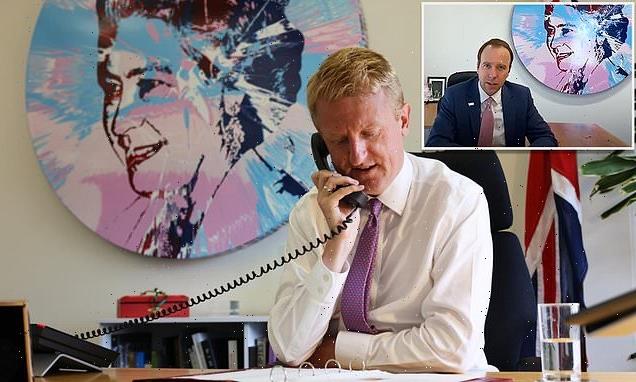 Isn’t that Matt Hancock’s? Oliver Dowden posts photo of him working next to pop art painting of the Queen which once hung pride of place in ex-health secretary’s Whitehall office

It was the painting which stole the show during the online coronavirus briefings of former health secretary Matt Hancock.

But following his kissing scandal – and eventual resignation – the unique portrait of the Queen by Damien Hirst was cast away by his replacement Sajid Javid, who chose to hang up an 1890s oil painting in its place.

But the ‘Spin Art’ piece, which is part of the Government Art Collection (GAC), appears to have found a new home in the office of Oliver Dowden.

The Secretary of State for Digital Culture, Media and Sport tweeted a photo of himself on the phone Friday, with the blue and pink piece proudly hanging in the background.

He tweeted: ‘Spoke with @ErnestoOttoneR about how the UK can work with @UNESCO to lead international efforts on protecting cultural heritage in Afghanistan.

‘We agreed any new regime must respect existing commitments to preserve heritage and safeguard the full diversity of Afghan culture.’ 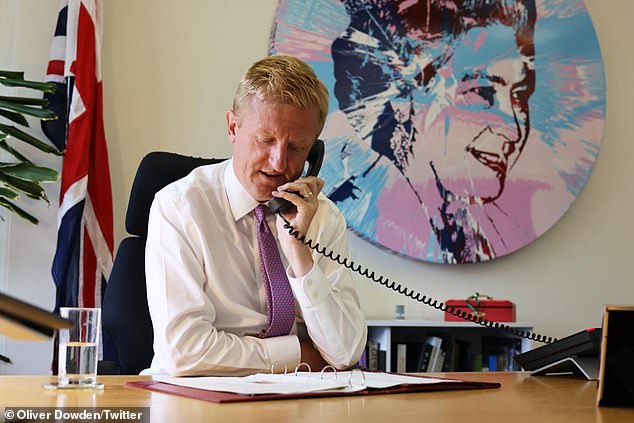 Oliver Dowden, the Secretary of State for Digital Culture, Media and Sport, tweeted a photo of himself on the phone Friday, with the Damien Hirst piece proudly hanging in the background

Turner Prize winner Hirst donated the eye-catching piece to the Government in 2015.

It was never shown to the public before it was debuted behind Mr Hancock in his Whitehall office as he briefed the nation on the latest Covid-19 news via zoom last year.

The portrait of the Queen in a ‘street art style’ is one of many of Hirst’s ‘spin paintings.’

The contemporary artist previously said the series of psychedelic compositions reminded him of his youth in the 1960s, describing them as ‘childish in the positive sense of the word.’

Hirst had a special machine in his Berlin studio which helped him create the ‘spin art’ – which became integral to his work by the mid 1990s. 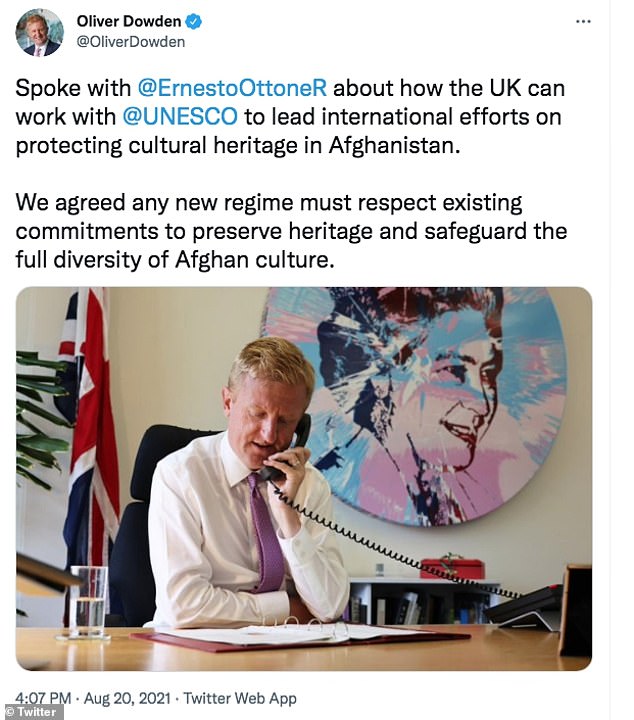 The Hirst painting was never shown to the public before it was debuted behind Mr Hancock in his Whitehall office as he briefed the nation on the latest Covid-19 news via zoom last year (Pictured: Tweet by Mr Dowden which shows painting in its new home)

The Government added the Queen portrait to its collection after purchasing one of Hirst’s iconic dot paintings.

Artworks from the GAC are displayed in UK Government buildings across the UK and the world.

The collection is said to be designed to promote British art and aid cultural diplomacy.

The vast collection of works began being compiled in 1898 and now boasts over 13,500 pieces dating from the 16th century to the present day.

They are mainly works by British artists in a broad range of media.