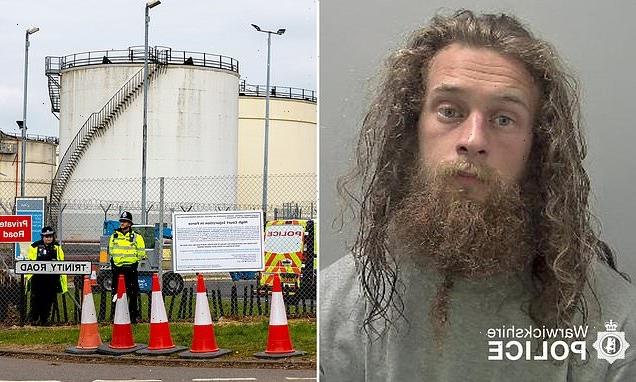 Police are on the hunt for a Just Stop Oil activist who is facing jail after blockading an oil terminal.

The long-haired eco-warrior was given a six-week prison sentence – in his absence – after breaching an injunction banning him from entering the Kingsbury Oil Terminal.

He was arrested 11 days after the injunction was granted – on April 23 – while protesting outside the oil terminal in Warwickshire.

Handling joined a group of 100 Just Stop Oil activists who lay in front of tankers and chained themselves to the gates as part of a protest.

He was convicted of breaching the injunction and was sentenced to six weeks in jail in his absence last week.

Now police have issued a warrant for his arrest and have issued a mugshot of the eco-zealot, featuring him with a beard and long straggly hair.

A spokesperson for Warwickshire Police said: ‘Anyone with information that could help police locate him should call 101. 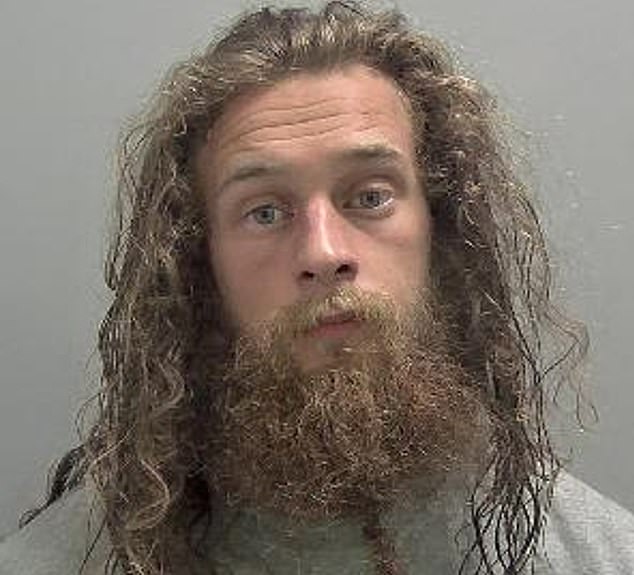 On-the-run Jake Handling, 27, is wanted by police after missing a court appearance last week. The eco-warrior was given a six-week prison sentence in his absence after breaching an injunction banning him from entering the Kingsbury Oil Terminal in Warwickshire 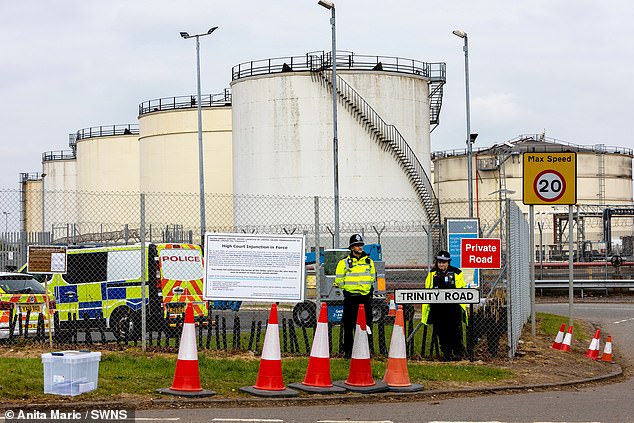 ‘Alternatively, information can be provided anonymously to the independent charity Crimestoppers.’

Police say the injunction was secured by North Warwickshire Borough Council on April 14 against protestor groups who had previously targeted the oil terminal.

The council said they had applied for the injunction as the protestors had posed ‘a serious risk to themselves, residents, and the environment during the first week of protest in Kingsbury’.

The injection gives police the power of arrest and detention until people are presented the next day at court for entering the oil terminal in Kingsbury.

Police say copies of the order are placed ‘prominently at the entrance to the terminal’.

Alongside Handling, Joshua Smith, 29, of Manchester, was arrested at the Kingsbury Oil Terminal on April 23.

Smith received a six-week suspended sentenced and ordered to pay £250.

Leader of North Warwickshire Borough Council, Cllr David Wright said: ‘The Council supports the right to lawful protest but some of the actions have and continue to create unacceptable dangers.

‘The Injunction gives the Police much better powers to stop repeat and dangerous protestors and today’s sentencing has shown that breaches won’t be taken lightly.

‘This hopefully will act as a deterrent to others and show that both the council and the Police are doing everything in their powers to prevent unsafe protesting at Kingsbury.’

It comes as, in the latest set of eco-protests, a 70-strong group hijacked a meeting of top Shell executives in central London today by singing their own rendition of Queen’s hit song We Will Rock You, before telling shareholders: ‘We will dismantle you!’

The eco-zealots, led by Extinction Rebellion, were filmed interrupting the company’s annual general meeting (AGM), being held at the Methodist Central Hall in Westminster, forcing it to be temporarily suspended.

Other demonstrators glued themselves to parts of the building before being led away by Metropolitan Police. There were three arrests. 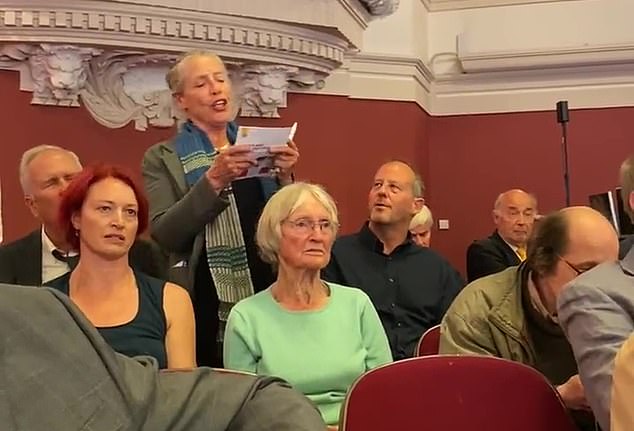 The Extinction Rebellion zealots were filmed interrupting the company’s AGM meeting, being held at Central Hall in Westminster, forcing it to be temporarily suspended 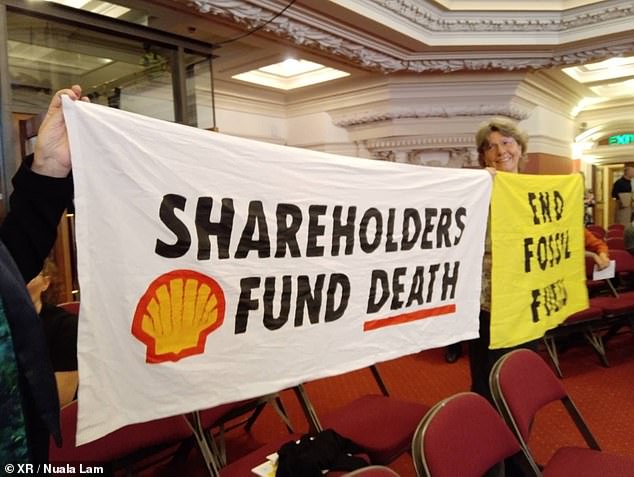 One woman who was handcuffed was seen lying on the floor as officers attempted to get her to stand up. The force has not confirmed if there have been any arrests.

It came as Shell is due to ask its shareholders to vote on a resolution supporting its climate strategy and rebuff an activist climate resolution, another version of which won 30 per cent of votes at last year’s AGM.

One woman who was led out of the building by police was later seen handcuffed on the ground and crying.

‘Shell must fall,’ the demonstrators repeatedly chanted during the meeting.

After some time, chairman Sir Andrew Mackenzie said: ‘OK, thank you. I would like to carry on with the meeting if I may’, but was prevented from doing so by the protesters.

‘That was an interesting start to our annual general meeting. I have listened to you for 15 minutes, could you…’ he added before being interrupted again.

‘I do not want to get to this, but if necessary I will ask you to leave the meeting so we can continue with the annual general meeting,’ Sir Andrew said.

In one clip a protestor is seen being pulled by her collar by a man in a face mask before a fellow demonstrator pushes his hand away. She then shouts towards the stage: ‘You are willfully leading us to disaster, you are a disgrace, Shell must fall!’