Fox News Flash top headlines for May 10 are here. Check out what’s clicking on Foxnews.com

Four elementary school teachers in Southern California were placed on administrative leave this week after a photo of them smiling while holding a noose circulated on social media. The school’s principal who reportedly took the photo is also on leave.

One parent claimed, according to KABC-TV of Los Angeles, that the noose was hung from a tree on the grounds of Summerwind Elementary School in Palmdale earlier this month. She also claimed that someone shot video of the teachers laughing and joking about the noose.

An investigation into the photo and the origin of the noose is now underway, district officials said.

Some parents were so upset about the photo that they either temporarily or permanently pulled their kids out of the school Thursday, KABC reported. 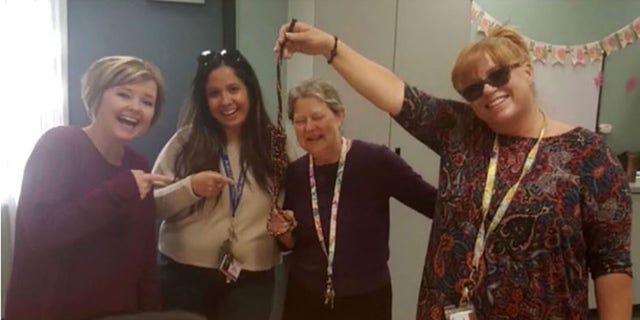 This photo, reportedly taken by the school’s principal, shows four teachers at Summerwind Elementary in Palmdale smiling while one of them holds a noose.
(Facebook/Twitter/Instagram)

"It hurts. It absolutely hurts me to the core. It's disgusting and I'm outraged, and I want to see some action and not just administrative leave,” parent Breyan Clemmons said about pulling her child out of the school. “We think that we’re sending them to a school; they’re safe. Never do we think we’re sending them to a plantation where they got nooses hanging up, and holding on to nooses,” she told the Antelope Valley Press.

The superintendent of the Palmdale School District issued a statement on Facebook, which read in part: “I am appalled that this incident occurred … I am committed to the Palmdale Promise’s values of equity, integrity, and multiculturalism, and I know that most of the district believe[s] in the same values the Promise upholds.”

Boy, 14, mauled to death by pack of dogs owned by professional trainer