Perverted GP, 71, who squeezed a woman’s breasts ‘in a Benny Hill way’ as if they were ‘a couple of melons’ as he molested 15 female patients as young as 12 over 24 years faces jail

Disgraced GP Alan Tutin, pictured, is facing jail after being convicted of sexually assaulting 15 women between 1980 and 2004

A trusted GP who believed he was ‘untouchable’ while molesting dozens of patients over two decades during ‘sexually motivated’ intimate examinations is facing jail.

He sexually assaulted the patients ‘under the guise of breast examinations or vaginal examinations’ and the court heard he even squeezed a patient’s breasts in a ‘really immature Benny Hill way’ as if they were ‘a couple of melons’.

A court heard he groped women during breast exams for totally unrelated conditions including a head cold and appendicitis.

Tutin, of Tonbridge, Kent, was first accused of sex attacks against patients in 1999, leading to two trials at which he was cleared both times.

He was later accused of sexual assault by another woman in 2003, but the General Medical Council opted to take no further action, instead sending him a warning letter about the need for chaperones during examinations with female patients.

However another criminal investigation was launched in 2013 following several complaints and letters were sent to thousands of former patients at the practice asking about his conduct.

Tutin was convicted of 15 counts of indecent assault against victims as young as 15 after a nine-week trial at the Old Bailey.

He was cleared of a further seven charges at that trial, and then cleared of three more sex assault allegations at a retrial at Blackfriars Crown Court.

Tutin was also struck off for abusing five patients for his own sexual gratification by the GMC in 2009.

He strenuously denied the latest claims, insisting: ‘I have always tried to do my best for patients throughout my career.’

Tutin qualified as a doctor in 1974 and spent the next few years doing hospital jobs in general medicine.

He then moved into general practice and after completing his year as a trainee GP, spent a year in a practice in Essex before joining the Merrow Park Practice in Guildford in 1980.

He remained a partner there for over 25 years, initially as a junior, rising to become senior partner.

His wife Angela was also a GP there and they lived with their four children in Guildford.

Sally O’Neill QC, prosecuting, said: ‘It seems that Alan Tutin ran the financial side of the practice and was undoubtedly someone who wielded a lot of influence.

‘He appears to have had quite a dominant personality and perhaps a somewhat arrogant and brusque way of dealing with both patients and staff.

‘He may also have been somewhat old-fashioned in his approach to patients and did not explain to them all the time what he was doing before he did it and why it was necessary.’

She added: ‘He may have felt himself to be untouchable and unchallengeable at the time because of his position both in the practice and in society and no doubt, you will want to bear in mind that things have changed over the years in relation to how a doctor should conduct himself towards a patient.’

Tutin was cleared of sexually abusing other women following two trials in 1999, then cleared of inappropriately examining eight women in routine check-ups after a General Medical Council hearing in 2001. 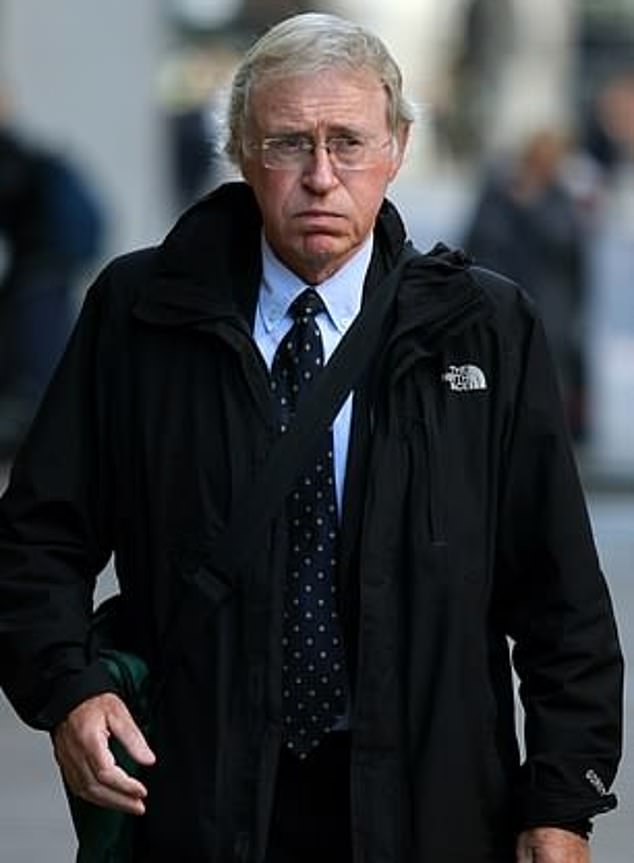 Tutin, pictured, was previously cleared of sex attacks at two trials in 1999, but was arrested again in 2013 when more victims came forward, prompting a five year investigation that ended in his conviction. He was cleared of 10 further allegations in this case, and will be sentenced on Friday

Two years later another woman came forward with a complaint and Tutin was eventually arrested in 2006 after more allegations were made, but no action was taken.

She told jurors Tutin used both hands to rub her breasts during the ‘uncomfortable, creepy, horrible’ appointment.

In 1984 or 85, an insurance company required a midwife at the practice to have a medical.

Tutin used ‘totally inappropriate language’ when he told her to ‘get her kit off’ and commented on the size of her breasts.

The midwife said she ‘felt dirty and violated’ and afterwards told two of her colleagues while she was in tears.

Another woman described feeling ‘mortified, embarrassed and ashamed’ when the GP groped her while she was a teenager after going to see him for something innocuous like a wart on her foot.

The court heard how another woman went to see Tutin in around 1986 when she was 19 only to be groped by the doctor.

Another teenager described how Tutin molested her when she was 15 and said the GP grabbed her breasts whilst supposedly checking for appendicitis.

Tutin ’embarrassed’ a 16-year-old girl who went to see him in 1994 when he appeared to be ‘feeling her breasts’ instead of checking for lumps as he claimed.

Another woman told jurors Tutin cupped her breast when she was just 12 after asking her to remove her top when she came in to see him over a head cold.

In 1995 or 1996 Tutin abused a 26-year-old woman during a vaginal exam while another 26-year-old woman told police how Tutin ‘panted’ as he groped her inside her bra for ‘a good handful and a feel’ of her breast before ‘rubbing her vagina’.

The GP squeezed a patient’s breasts in a ‘really immature Benny Hill way’ as though they were ‘a couple of melons’ when she was in her early twenties, between 1996 and 1999.

Ms O’Neill said: ‘She is not now sure whether she also removed her bra but she does recall that he then touched her breasts with both hands, fondling and squeezing them in what she described as a really immature ‘Benny Hill’ way as though he was feeling a couple of melons.’

The victim believed there may have been at least two other times when he did the same before she changed doctors.

An air hostess in her mid-twenties reported how the ‘smirking’ doctor groped one of her breasts and appeared to be ‘staring’ at them during an appointment for a renewal of her contraceptive pill in 1999.

A 46-year-old woman was fondled during a breast exam after she lost her voice in 1999.

The court heard Tutin ‘tried to stimulate’ another patient in her early thirties during breast and vaginal examinations later that same year.

He behaved in a similar way towards another patient, in her mid-forties, during an internal examination also in 1999, only stopping when she cried out that he was hurting her.

An 18-year-old girl told police she was made to feel embarrassed after Tutin groped her breasts during a check-up in 2003.

Louise Sweet, QC, defending, said the most recent investigation followed ‘publicity and intense gossip of a salacious and poisonous nature’ in the wake of the earlier trials.

She claimed Tutin’s accusers were simply ‘misunderstanding’ or ‘misremembering’ what happened to them.

She urged the jury not jump on the ‘there’s no smoke without fire bandwagon’.

Tutin will be sentenced at the Old Bailey this Friday and has been remanded in custody.

Two more allegations of indecent assault were ordered to lie on file.

Ms Sweet referred to this ‘awful part of Dr Tutin’s life’ when the first allegations were made which, she reminded jurors, ‘he came out of completely exonerated’.

‘This investigation postdates publicity and intense gossip of a salacious and poisonous nature,’ she continued.

Tutin told jurors: ‘I totally deny that I have sexually assaulted any patient. I have always tried to do my best for patients throughout my career.’

His wife said the allegations had left her husband feeling ‘suicidal’.

She said: ‘It’s been absolutely horrendous. His self-esteem has plummeted to almost nil and he has become very badly depressed from it all.

‘It has become very difficult at home and at the surgery. At times he has become suicidal.

‘All he ever wanted was to be a doctor. He had to fight to do that, and when he became a doctor he wanted to be the best doctor.

‘He was very thorough during examinations but if you’re no thorough, you don’t find anything.’

Speaking after Tutin’s retrial concluded Detective Chief Inspector Richard Haycock, who was in charge of the investigation, said: ‘Alan Tutin completely abused his position to sexually assault his female patients of a variety of age ranges over a long period of time. This was a gross breach of the trust that they placed in him as a doctor.

‘Whilst there had been previous proceedings and investigations, we were committed to a thorough and meticulous investigation to reveal the true extent of his offending.

‘I have nothing but praise and respect for the victims and everyone who has come forward and given us their accounts and evidence. I want to pay particular recognition and admiration to those who have had the courage to give evidence against Tutin in court.

‘Many of them did not come forward at the time because they were embarrassed or were unwilling to complain for fear their allegations against a doctor would not be believed.

‘I hope that the guilty verdicts reached in the first trial has given them, and others in a similar position, the confidence that even if you are making allegations against a person in a position of trust or authority and even if these allegations happened a long time ago, you will always be taken seriously and a thorough investigation will always be carried out.

‘I also hope that the guilty verdicts will allow Tutin’s victims and all those affected by this dreadful set of events to put this ordeal behind them and finally get on with their lives.’

DCI Haycock continued: ‘This has been a lengthy, complex and challenging investigation over five years.

‘I am very proud of the small team of officers in Surrey Police’s Complex Abuse Unit, and would like to thank and commend them for working tirelessly on this case to ensure that Tutin was brought to justice for his indefensible crimes.’

He will be sentenced at the Old Bailey this Friday.

China is killing a third of its pigs because of a gruesome and incurable fever, which could drive up the price of pork around the world
Technology