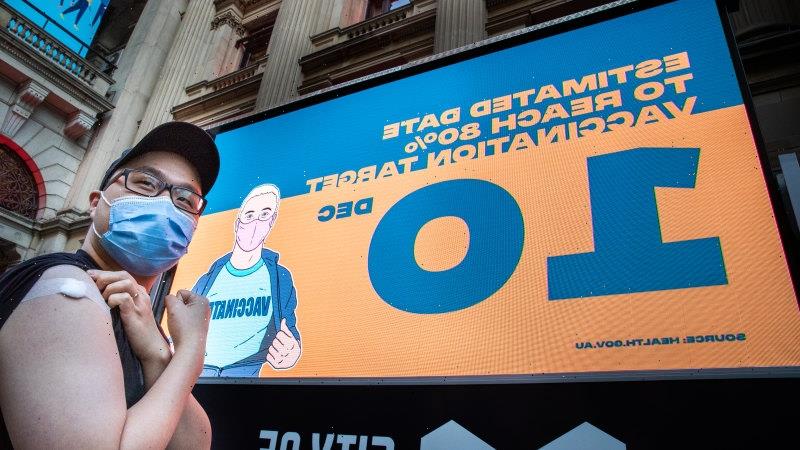 Melburnians will technically not be allowed to drink alcohol during the picnics permitted by eased COVID-19 restrictions, but the government has indicated police will not take a heavy-handed approach to enforcing the new rules.

From Saturday, up to five fully vaccinated adults or two non-vaccinated people will be able to meet outdoors after the state reached its 70 per cent first-dose vaccination target.

However, the earlier-than-expected loosening of lockdown rules came with tough new restrictions for the construction industry, which will be subject to mandatory vaccinations from September 23 and a ban on workers moving between metropolitan and regional areas.

The new eased rules will come into effect at 11.59pm on Friday. As expected, they include an extension of the travel limit to 10 kilometres, the reopening of skate parks and outdoor gyms and an increase in permitted exercise time to four hours.

Golf and tennis will also still be banned and the curfew will remain in place.

The change comes ahead of the state’s road map announcement on Sunday that will detail milestones for rule easing throughout October and November.

In a shift from his usual focus on strict enforcement, Mr Andrews asked Victorians not to take advantage of their new freedoms, saying police would not be given additional powers to compel people to prove whether they are vaccinated.

“We can’t literally have a situation where we are going park by park, picnic by picnic,” he said. “There’s a degree of good faith in this … if people do the right thing, then we’ll be out of lockdown sooner.”

The government considered whether the ban was still required and decided to maintain it in a bid to dissuade people from gathering in larger groups and behaving in a manner that heightened the risk of transmission.

About 62 per cent of the new cases are in Melbourne’s northern suburbs and about 85 per cent of all active cases in the state are people under 50 years of age, while almost a quarter are people in their 20s.

The Age has confirmed eight Indigenous Victorians have contracted COVID-19 in the current outbreak.

Victorian Premier Daniel Andrews indicated the eased rules would not have a significant effect on case numbers, brushing off a call from the Victorian branch of the Australian Medical Association to ease restrictions only after 80 per cent of Victorians aged 12 and above had been double-vaccinated for two weeks, which will probably be several months away.

A greater proportion of older people will be able to take advantage of the new outdoor freedoms for vaccinated people because they have been eligible for jabs for longer.

CBD resident Edbert Limen, 28, received his first jab at the Melbourne Town Hall, where a large display has been set up to project the state’s rolling vaccination rate and progress towards inoculation targets. 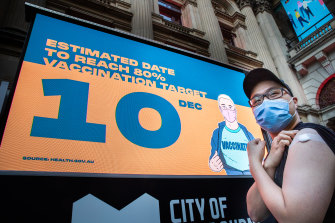 “I want to help the community,” he said. “My friends at the moment are just having issues with the long queue waiting to get vaccinated, but they all want to be part of the program.”

“We are putting the numbers up there loud and proud, and we hope this encourages more conversations and compels more people to be a vaccine hero,” she said.

While the state has moved past the 70 per cent first-dose target, hotspots with few GP clinics are lagging. Hume, the local government area that has by far the highest active COVID-19 case rate in the state, also has the second-lowest first dose rate of Victoria’s 79 LGAs.

As of Monday morning (the most recent date for which data is available), 55 per cent of Hume residents aged 16 and over had received their first vaccine dose, compared with 66.8 per cent for the entire state on that date.

First-dose rates are also lower in some of the LGAs in Melbourne’s north and west with the highest active case rates. About 56 per cent of the eligible population in Whittlesea has received their first dose, 57.9 per cent in Brimbank, 59.3 per cent in Darebin, 59.8 per cent in Melton and 60.4 per cent in Moreland.

Part of the reason these areas have lower first-dose rates is because their population skews younger than the rest of the population. Hundreds of thousands of top-up vaccines are being sent into these areas from this month.

Mr Andrews revealed several new rules for construction workers, including a ban on crossing the metro-regional boundary for work and a mandate that all employees must have received at least one vaccine dose by next Friday to keep working.

The construction industry, currently operating at 25 per cent of capacity, has come into the spotlight amid claims of tradespeople not wearing masks and infections linked to worksites, including cases that led to Ballarat being locked down on Wednesday.

Mr Andrews called Thursday’s mandate a “down payment” on construction reopening to 50 and 75 per cent in the coming weeks and months.

“This is a plan to keep the thing open, rather than doing what you could do, and that’s to say ‘oh well, we’re just going to close it down to zero’,” the Premier said.

Victoria is the only jurisdiction to make vaccination mandatory for construction.

The move appeared at odds with the views of the state’s construction union head John Setka, who said earlier this week he preferred a “conversation with people” than a broad mandate.

However, Mr Setka, the Victorian secretary of the CFMEU, said on Thursday that “extreme circumstances sometimes call for extreme measures” and his union would not oppose the change.

“I think it is one of the prices we have to pay,” he told 3AW radio.

“Three-quarters of the construction industry is already sitting at home not working … people are financially suffering. I respect people’s right to be an anti-vaxxer but, you know, I haven’t heard of a road map or plan that they have.”

Master Builders Victoria chief executive Rebecca Casson agreed, saying a mandate was the only way to keep open an industry that employs 320,000 people in the state.

“That’s why MBV has been discussing mandatory vaccinations with the government – because our industry cannot survive on a pilot light forever,” she said.

Construction workers, who will also be banned from eating or drinking indoors at worksites, will be given priority access for Pfizer vaccines at four state hubs from Friday.

Stay across the most crucial developments related to the pandemic with the Coronavirus Update. Sign up for the weekly newsletter.