One dead as magnitude 6.6 earthquake hits the Philippines

At least one person has been killed after a magnitude 6.6 earthquake hit the Philippines early Tuesday, causing buildings to collapse.

The tremor stuck in the Samar Sea around 8.03am local time (00.03GMT), just a few miles east of the town of Cataingan, which was badly damaged.

The body of a man was pulled from the ruins of a three-storey house in the town, according to a local reporter who also saw the man’s wife being rescued alive. 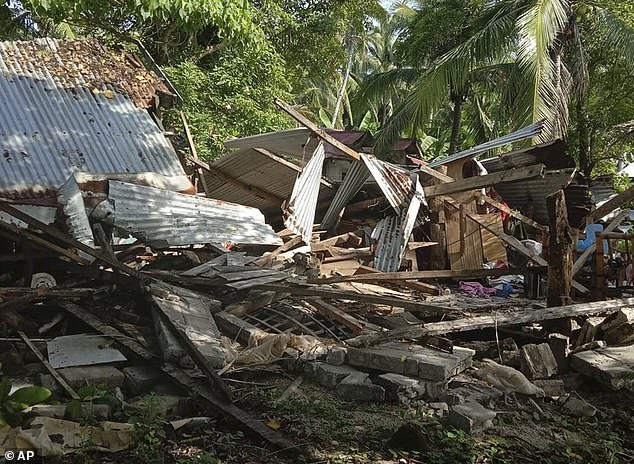 A magnitude 6.6 earthquake struck the Philippines around 8am local time Tuesday, badly damaging buildings in the town of Cataingan, on Masbate Island 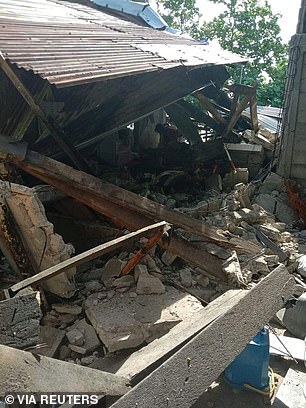 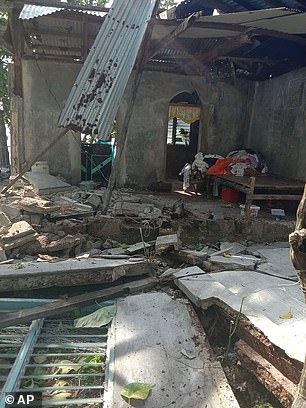 At least one man has been killed after a three-storey house collapsed on him as he and his wife slept, with others left injured (pictured left and right, damage in the town of Cataingan) 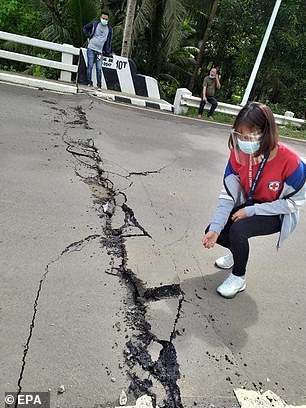 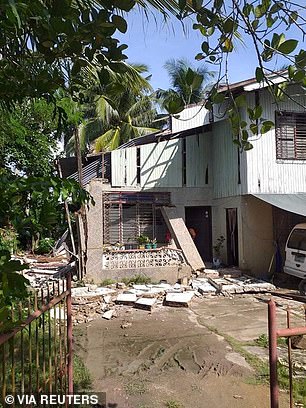 Roads were cracked and buildings badly damaged in the impoverished town of Cataingan, which was badly hit by the quake 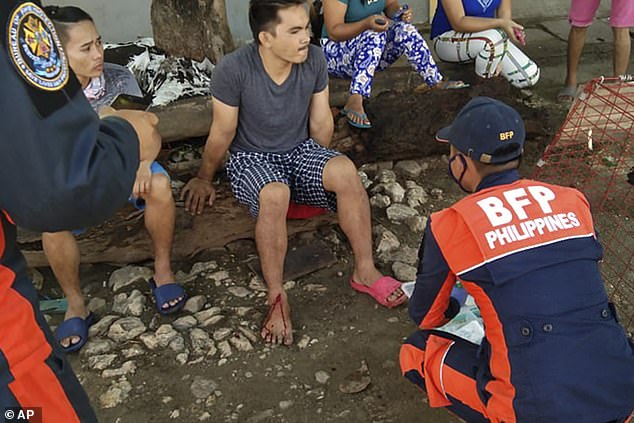 Members of the Philippines fire service treat a wounded man in Cataingan, a town which was badly damaged by the quake

People were filmed fleeing into the streets as buildings in the impoverished town of 50,000 residents fell down around them.

The tremor was powerful enough to crack roads, with one emergency worker describing it as ‘really strong’.

Local radio station reporter Christopher Decamon said he was broadcasting at the time the quake hit, prompting him to run from the building.

While outside, he saw the man’s body being pulled from the rubble of a house. His death has since been confirmed by police.

So far there have no other reports of casualties but search and rescue efforts are still under way.

The quake struck as the archipelago battles surging numbers of coronavirus infections, with more than 164,000 cases in total and restrictions on movement across the country.

A lockdown affecting a quarter of the population, including the capital Manila, will be eased Wednesday.

In Masbate’s Palanas town, police chief Captain Alvin Guerina told AFP that several patients, including a pregnant woman about to go into labour, were evacuated from a hospital as a precaution in case of aftershocks.

So far at least 14 aftershocks have been recorded by the Philippine seismology office, with the strongest registering at a magnitude 3.5.

A video posted on Facebook and verified by AFP shows light damage to a food market in Cataingan. 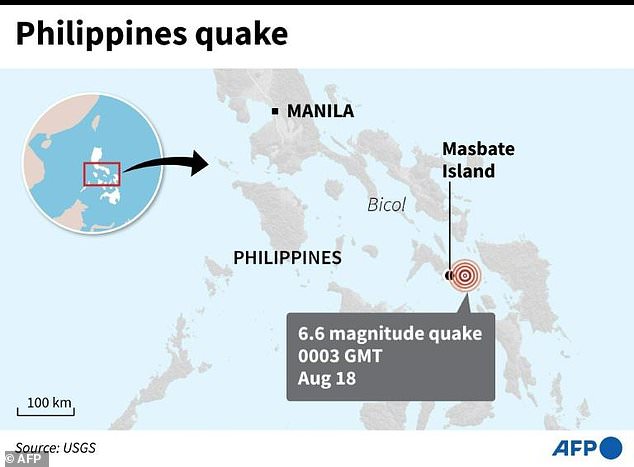 The tremor struck at 8.03am local time in the Samar Sea, off the coast of Masbate Island a just a few miles from the town of Cataingan 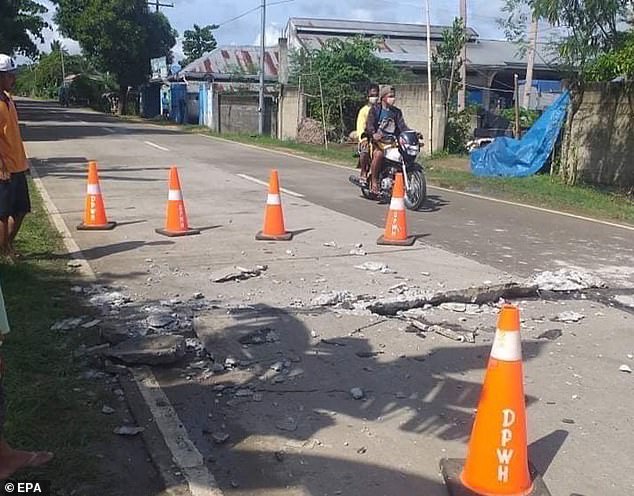 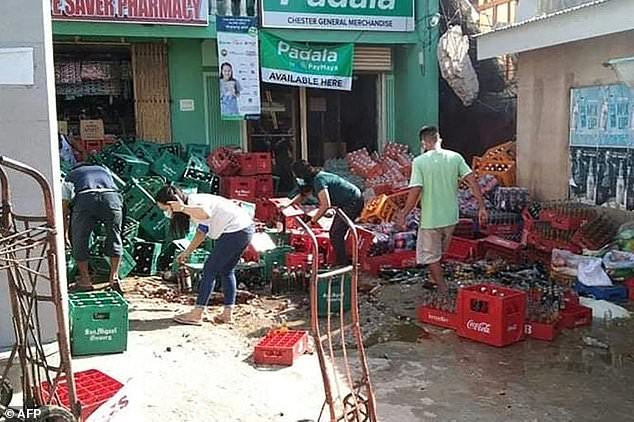 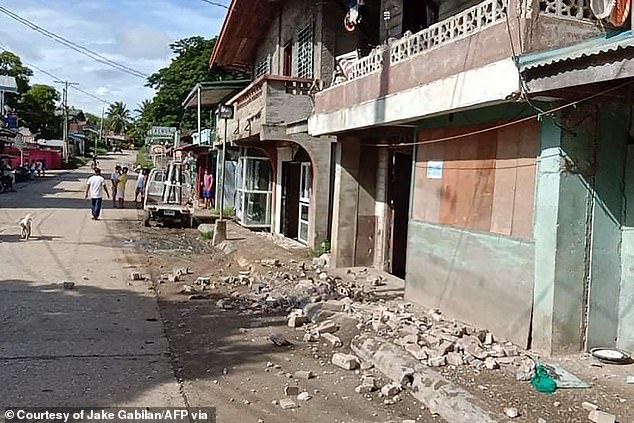 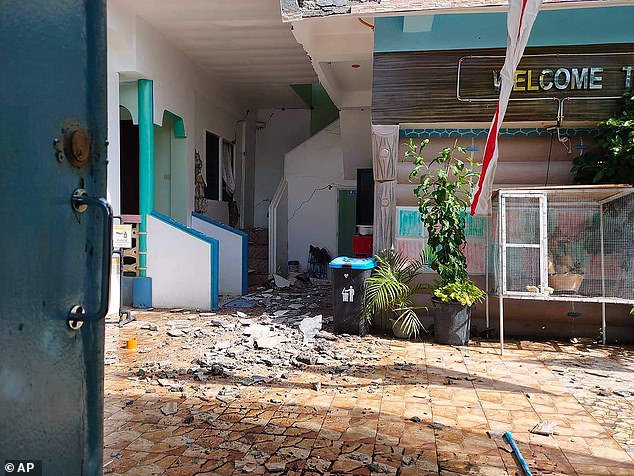 A partially-damaged building is seen in the town of Cataingan, in the Philippines, after a strong earthquake struck the region

Overturned buckets and small fish were scatted on the ground and chunks of cement had fallen from a pillar. People stood outside on the street.

Other photos taken in nearby Uson town show a sealed road with a large crack across it.

The quake was felt hundreds of kilometres away.

In the city of Iloilo about 250 miles southwest of Masbate in the neighbouring Visayas region, residents ran out onto the streets.

‘Almost everyone inside buildings rushed to the streets. Up to now, they’re still outside.’

The Philippines is situated on the Pacific ‘Ring of Fire’, an arc of intense seismic activity that stretches from Japan through Southeast Asia and across the Pacific basin.

It hit as the island was still recovering from a string of deadly quakes in October.