Valuers are marking down London office rents by just 0.3 per cent despite freefalling demand with nearly 20million sq ft of space now available, it was claimed today.

The valuers have been criticised for being ‘in denial’ on pricing as firms try to sublet space they are no longer using amid the coronavirus shift to working from home.

It comes as the available of London office space soared from the ten-year average of 14million sq ft with many employees expecting to be at the kitchen table indefinitely.

Covid-19 has changed working life for millions of people around the world, reducing demand for office space and prompting companies to not renew their leases.

But Lord Oakeshott, who runs London-based commercial property firm Olim Property, has raised concerns about valuers not keeping up with office demand. 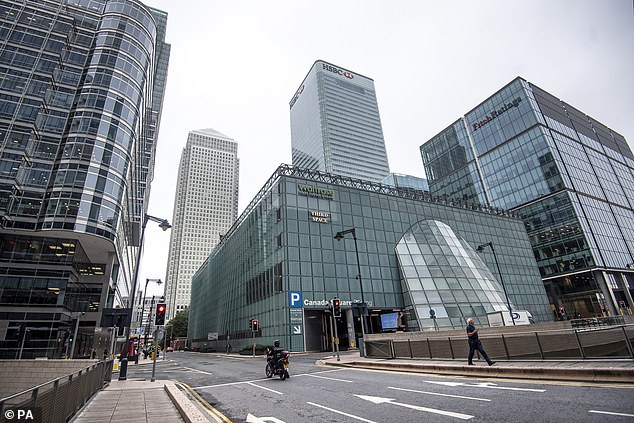 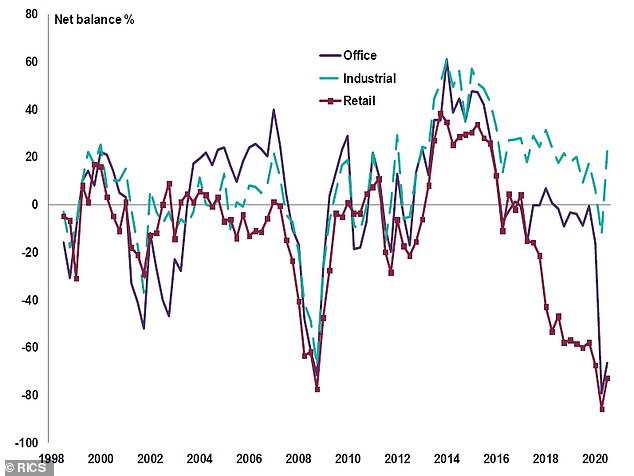 OCCUPIER DEMAND: Royal Institution of Chartered Surveyors show how demand for commercial property has plummeted this year – particularly in the office and retail sectors

The former Treasury minister told The Times: ‘The valuers are now in denial on offices just as they have been for years on retail.

‘London office rents are clearly in freefall, with very little occupier demand, but the valuers are only marking them down by 0.2 per cent or 0.3 per cent a month.’

His concerns come amid scrutiny at overly-optimistic valuations of retail property after claims surveyors were too late in responding to the crisis on the high street.

Research from property consultancy Carter Jonas in September found office rents could fall by more than 10 per cent in many areas of London over the next year.

But Coldwell Banker Richard Ellis, which is among the major firms in the valuation industry, believes there will still be strong demand for offices with good amenities. 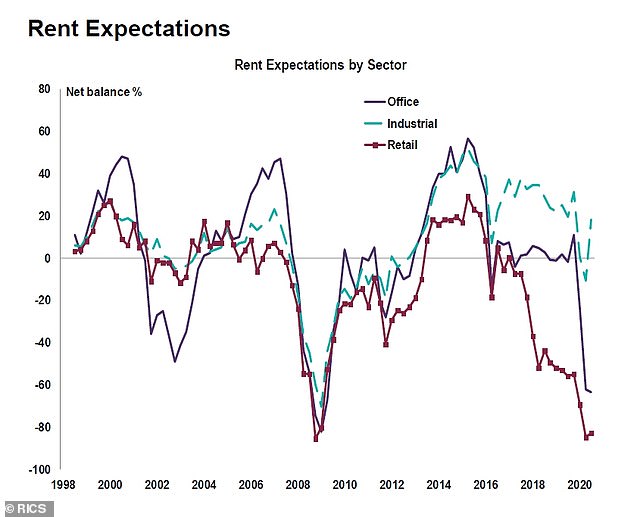 Its head of UK valuation Nick Knight told the Times: ‘Has the effect of Covid brought an internet moment to the office sector that is comparable to retail?

How is a commercial building valued?

Commercial property valuations are generally requested when a building is being sold, developed, mortgaged, taxed or insured.

An approximate value can be worked out by combining the land and construction costs for a total figure.

This can then be compared to similar local buildings, with the same number of floors, rooms and square footage.

Another option is looking at the ‘value per door’, which involves taking the price of one lot and multiplying it by the total number of commercial spaces within the building.

The income capitalisation can also be studied, which looks at the revenue of the businesses within a building.

‘I think it’s quite early to make that call. We know that companies are moving to hot-desking, a lot of organisations are looking to reduce their footprint, availability has risen and that’s impacting on forecasts and rental values in the valuation world.’

He added: ‘There is a view emerging that the longer people have been in lockdown, the more they’ve realised what the office gives that they are not having at home.’

In September, the Institute of Chartered Accountants warned about a lack of evidence for ‘competence and objectivity’ of property valuations in accounts.

The Royal Institution of Chartered Surveyors found last month that 78 per cent of chartered surveyors view the commercial property market as being in a downturn.

The organisation said the third quarter expectations of a fall in rents for prime office and retail space were the most widespread since records started in 2014.

Also last month, a study of about 1,000 firms by the Institute of Directors showed that nearly three-quarters plan on maintaining the rise in home working. 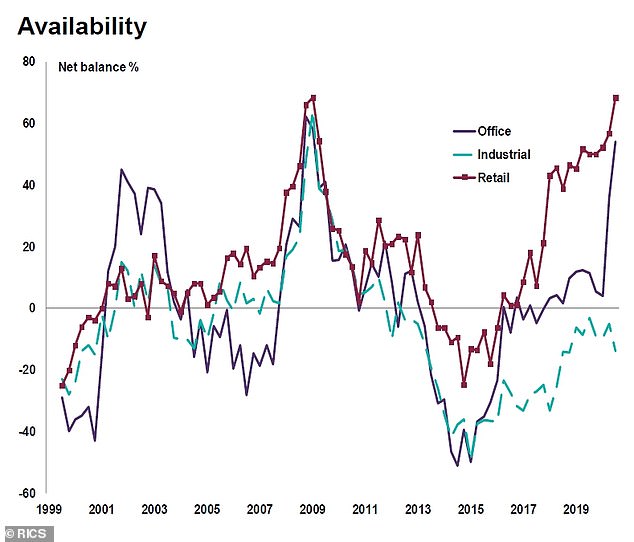 AVAILABILITY: There has been a huge spike in availablity of office and retail premises amid freefalling demand with nearly 20million sq ft of office space now available

Separately today, it was revealed rental prices in Britain’s countryside have increased by around 5 per cent over the past year, but have fallen by about 5 per cent in cities.

Rural rents increased by 5.5 per cent annually in October to £919 per month on average, Hamptons International said.

Tenants can save 31 per cent or £417 per month typically by swapping city living for the good life in the country, the index of private sector rental prices found.

But as strong demand for rural properties pushes rents higher, the potential savings to be made from escaping to the country are getting smaller, the report said.

Global accounting and consulting firm Deloitte is among the firms cutting down on office space during the coronavirus pandemic.

The company said it would close four of its 50 British offices as it reviews its real estate portfolio, but will retain the staff on work-from-home contracts.

Deloitte revealed last month that it would shut its offices in Gatwick, Liverpool, Nottingham and Southampton, where about 500 people work. 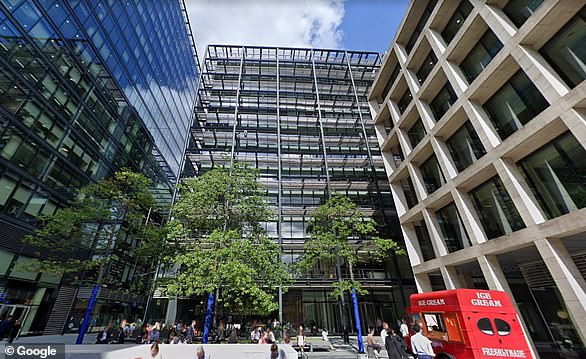 Stephen Griggs, its UK managing partner, said: ‘Covid-19 has fast-tracked our future of work programme, leading us to review our real estate portfolio,’

He said all staff based at the four locations slated for closure would continue to be employed by Deloitte under permanent work-from-home contracts.

‘Any proposed change is to our ‘bricks and mortar’, not our presence in these regions’, he said on October 17.

Everything You Need to Use Bitcoin Safely, From Beginner to Expert