Notre Dame wants to make it clear that it doesn’t endorse what Lou Holtz said about former Vice President Joe Biden at the Republican National Convention.

Holtz spoke Wednesday night at the RNC and said that Biden was a Catholic “in name only.” Biden, a Catholic, has cited his faith as a constant throughout his life.

“One of the important reasons [President Donald Trump] has my trust is because nobody is but a stronger advocate for the unborn than President Trump,” Holtz said. “The Biden-Harris ticket is the most radically pro-abortion campaign in history. They and other politicians are Catholics in name only and abandon innocent lives. President Trump protects those lives. I trust President Trump.”

Holtz led into his line about trust in Trump by citing his time at Notre Dame and the fact that there’s a statue of him at the school.

Thursday, Fr. John Jenkins, the president of Notre Dame, issued a statement that said people should not question the sincerity of others’ faith and that Holtz’s previous employment at the school “must not be taken to imply” that Notre Dame endorsed his views.

“While Coach Lou Holtz is a former coach at Notre Dame, his use of the University’s name at the Republican National Convention must not be taken to imply that the University endorses his views, any candidate or any political party,” Jenkins said. “Moreover, we Catholics should remind ourselves that while we may judge the objective moral quality of another’s actions, we must never question the sincerity of another’s faith, which is due to the mysterious working of grace in that person’s heart. In this fractious time, let us remember that our highest calling is to love.”

Holtz was a college football head coach for 33 seasons. He coached at Notre Dame from 1986-1996 and the Fighting Irish went 100-30-2 in his tenure. The Irish went undefeated in 1988 and were the No. 1 team in the postseason AP poll after a win in the Fiesta Bowl. 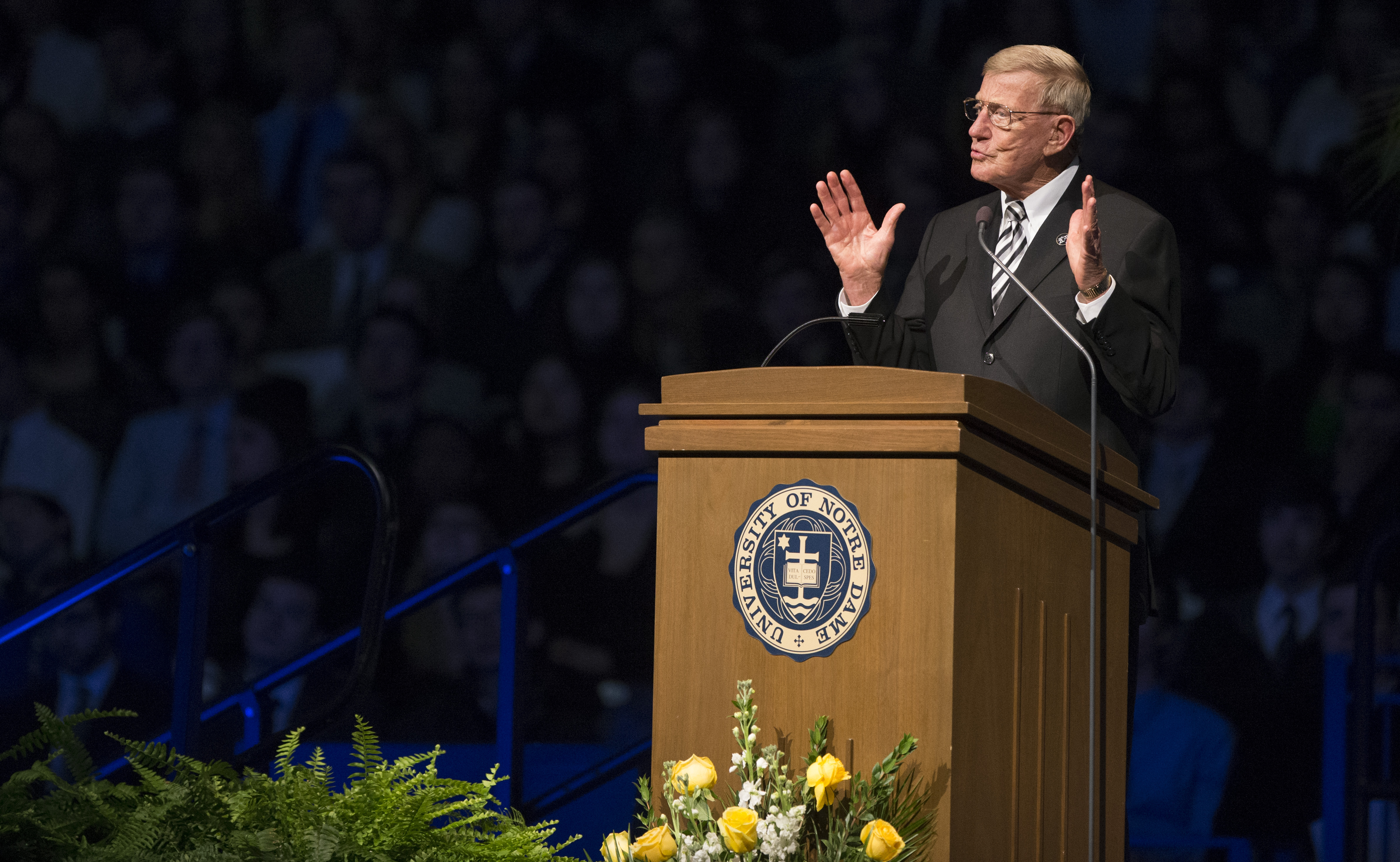 Holtz has been prone to hyperbole in recent television appearances. The former ESPN college football analyst has twice appeared on Fox News over the summer and made Normandy analogies when discussing the need for college football to happen in the fall during the coronavirus pandemic.

“When they stormed Normandy, they knew that there were going to be casualties, there was gonna be risk,” Holtz said in an Aug. 11 appearance on the cable news channel. “Two percent of the people that go to the emergency room go for COVID-19. But young people, Bill, they think it’s like cancer. They think they’re gonna die.”

Notre Dame was one of the schools that saw a massive spike in coronavirus cases after students arrived on campus in August. The school implemented a two-week remote learning period on Aug. 18 after a steady increase in the rate of students testing positive for COVID-19.

As of now, Notre Dame is one of the 76 schools still attempting to play football in the fall. The Irish have aligned with the ACC this all as it pushes forward with a football season along with the Big 12 and SEC and other conferences. The Big Ten, Pac-12, Mountain West and MAC have already made the decision to postpone their football seasons.

Nick Bromberg is a writer for Yahoo Sports.