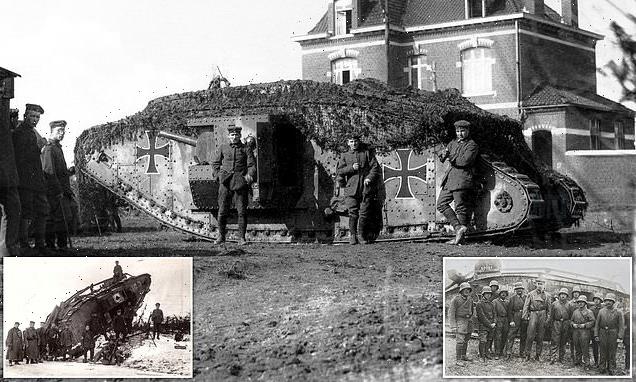 Tanks a lot! Never-before-seen pictures show how Germans captured British tanks and used them against their former owners in First World War

Never-before-seen photos of the first time the Germans used captured British tanks against Allied soldiers have come to light on the 103rd anniversary of the battle.

The British were the first to invent the tank in 1916 and a year later used them to overwhelm the enemy at the Battle of Cambrai in the First World War.

Although the battle was a success for the British, the Germans captured up to 71 Mark IV tanks, with more than 50 being reassembled and made battle-ready by March 2018.

The Germans were found lacking when it came to tank warfare and so modified the British ones rather than design and build their own.

They fitted them with 57mm guns and Lewis machine-guns and painted a large black iron cross on the sides – the military emblem for the German Empire.

They also used trained stormtroopers as tank crews so that in the event of the tracked vehicles breaking down they could get out and fight. 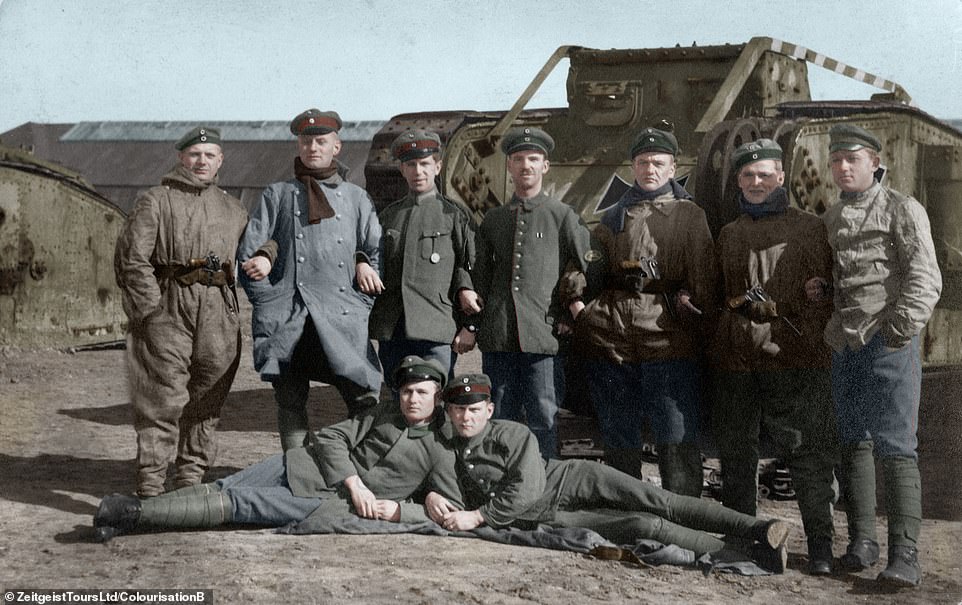 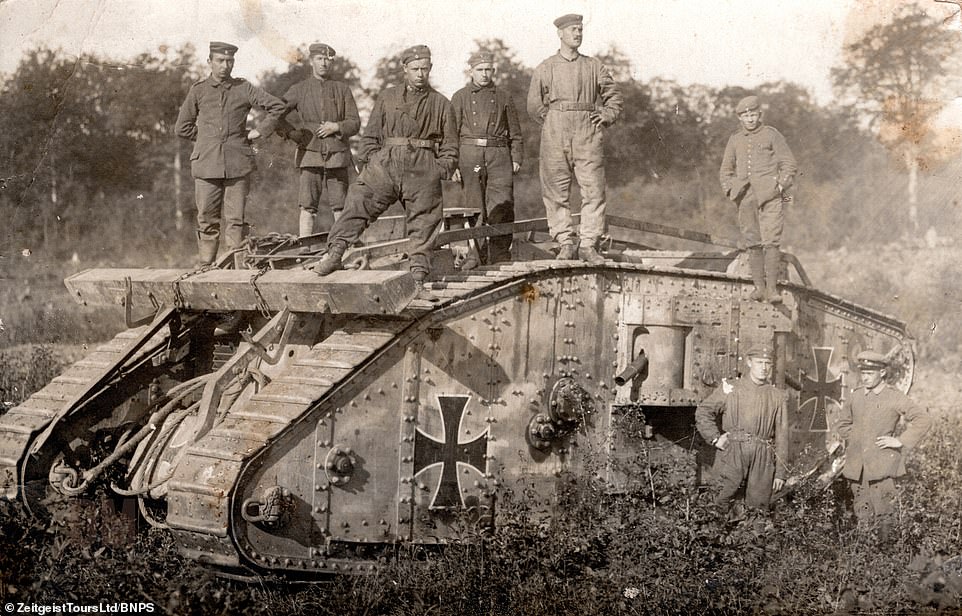 Enemy soldiers stand atop another British tank, dubbed ‘Hanni’, in July 1918 after capturing the war machine at the Battle of Cambrai a year earlier 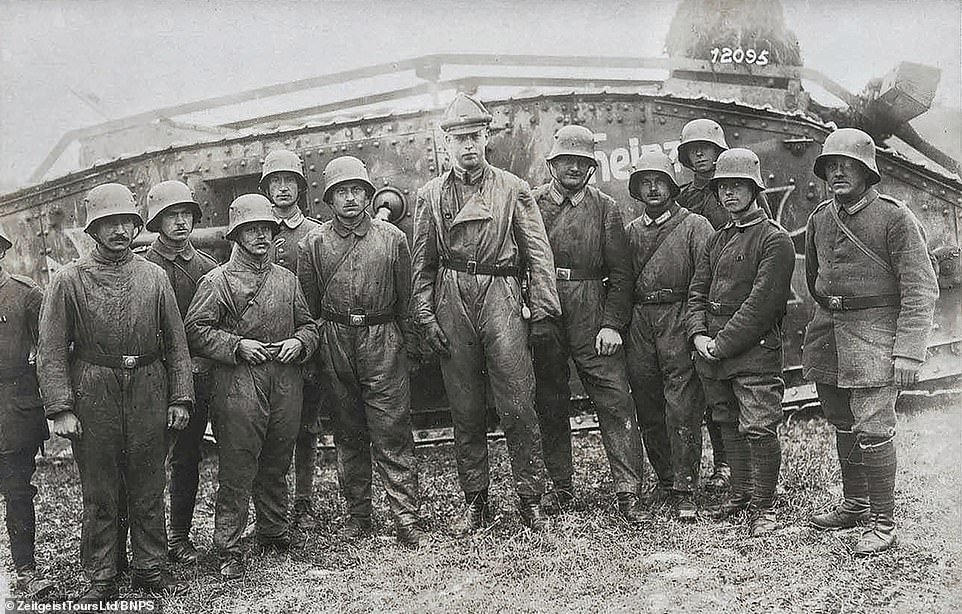 A German battalion poses in front of ‘Heinz’, one of several tanks captured from the British and used against the Allied Forces at the Battle of Aisne during the First World War 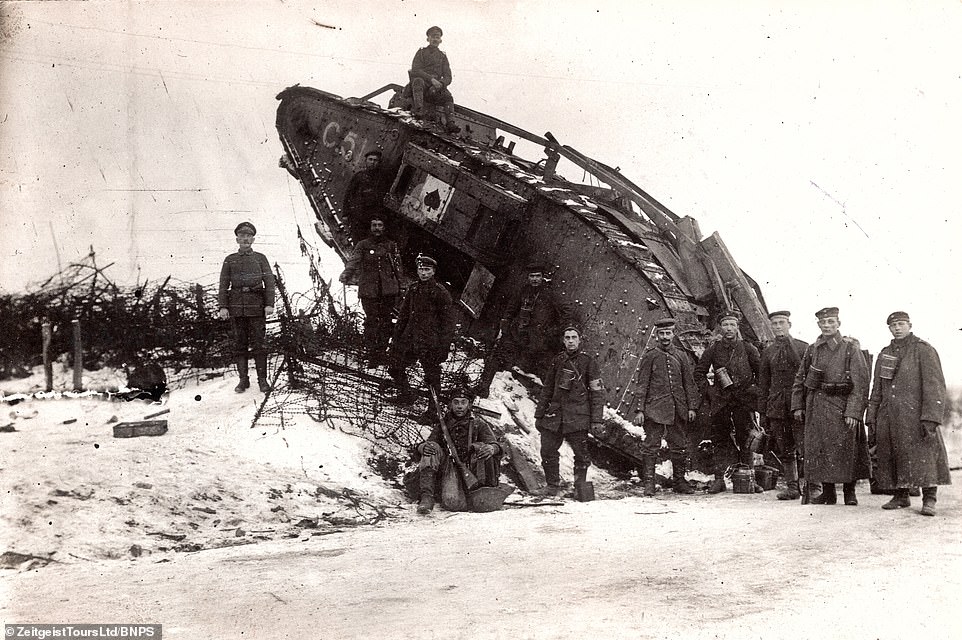 ‘Chaperon’ on the side of the road near Vaucelles, France, after being captured from the British by the Germans in one of a handful of never-before-seen photos released by historian Robin Schaefer

103 years ago today, Germans used 20 of them to great affect at the Third Battle of Aisne, a massive surprise attack which lasted until June 4.

The tanks advanced up to 1,000 yards ahead of the infantry.

The 12-man crew of one vehicle alone imprisoned more than 200 British soldiers by chasing them out of their trenches.

Of the 20 tanks that took part only two were knocked out and their crews survived to continue the fight with the infantry.

He said: ‘The Germans were slow and waited too long to respond to the invention of the tank in 1916.

‘They focused their production on U-boats as they were seen to be more important. 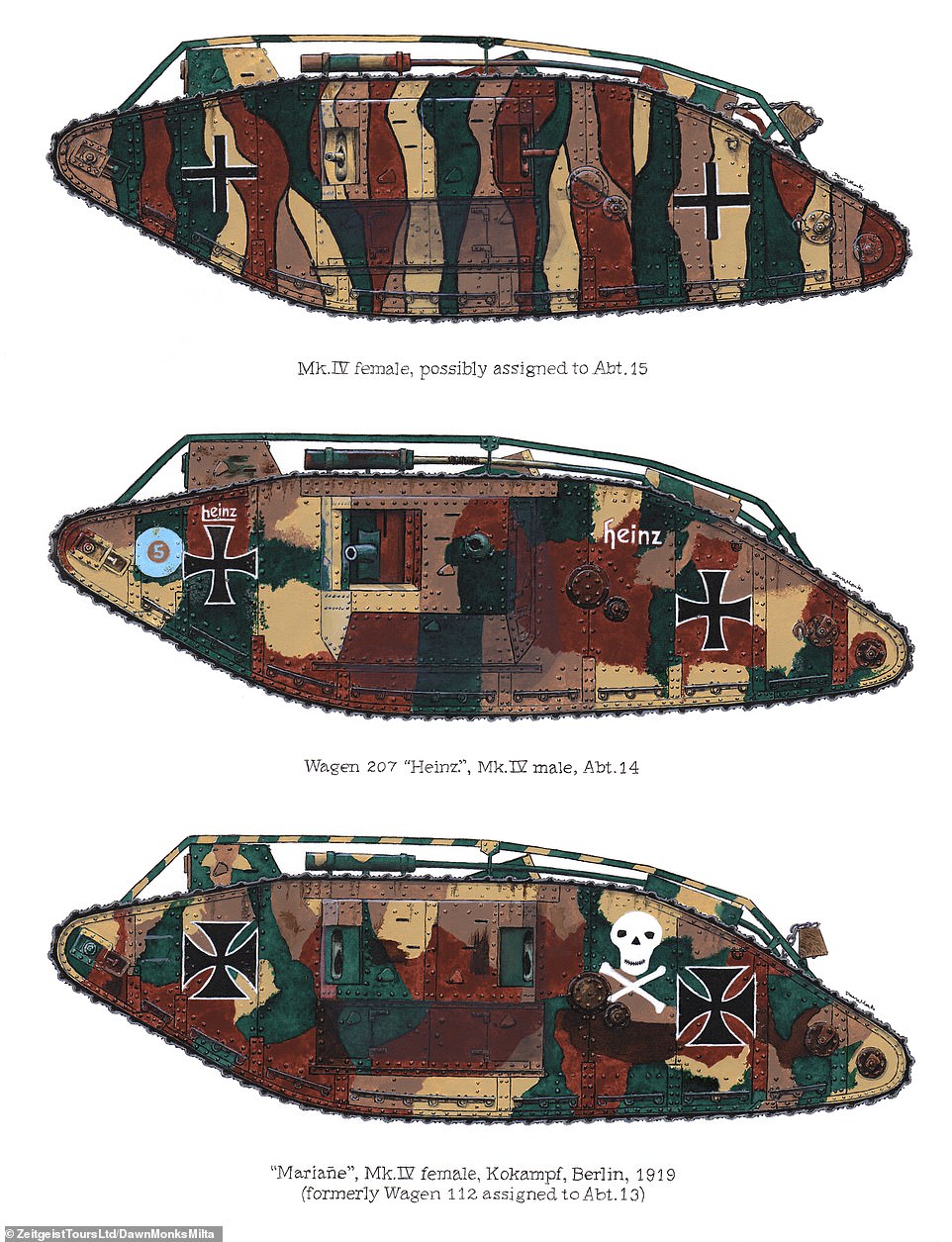 Rather than build their own tanks from scratch, the Germans adapted the British models captured at the Battle of Cambrai to suit their own needs 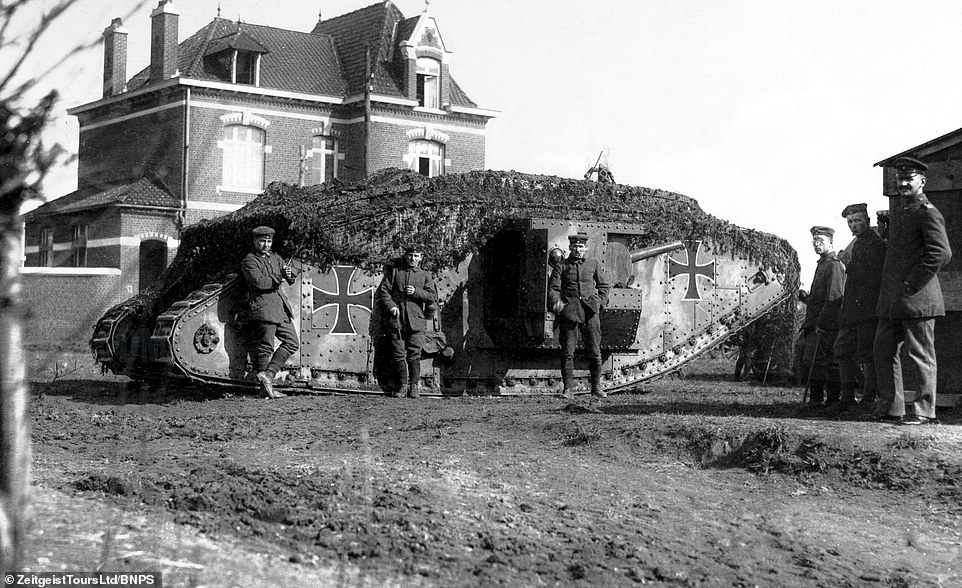 An adapted MK.IV Beutetank is pictured alongside smirking German soldiers in Wavrin, France, April 1918, as never-before-seen photos come to light on the 103rd anniversary of the battle in which they were used against Allied Forces 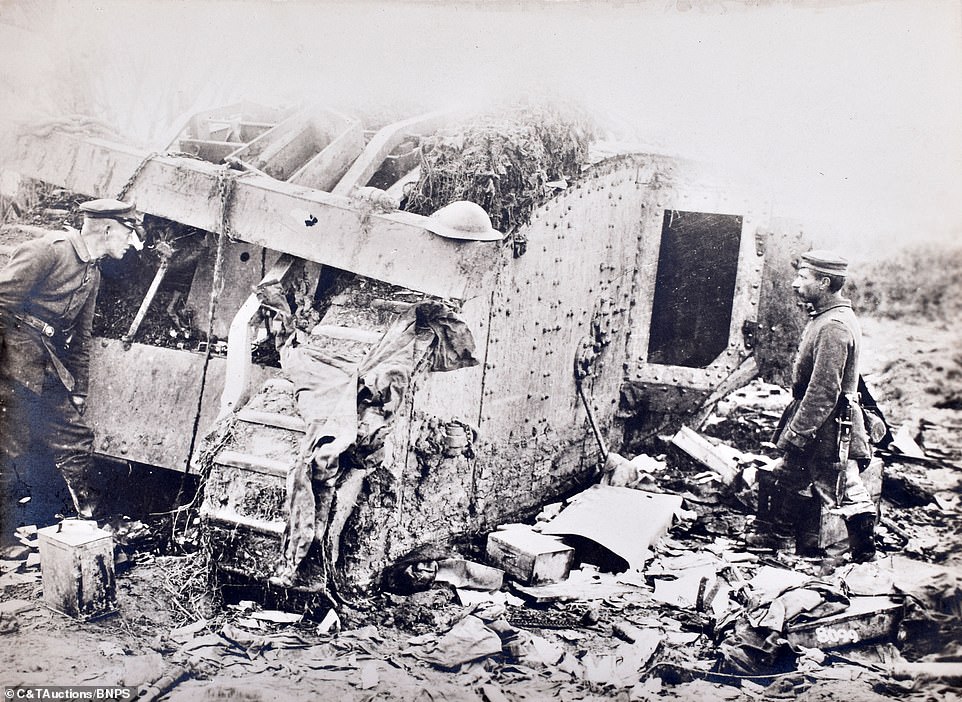 German soldiers capture a British Mark IV tank, possibly near the battle site of Cambrai in 1918, which would later be adapted and used against the Allied Forces 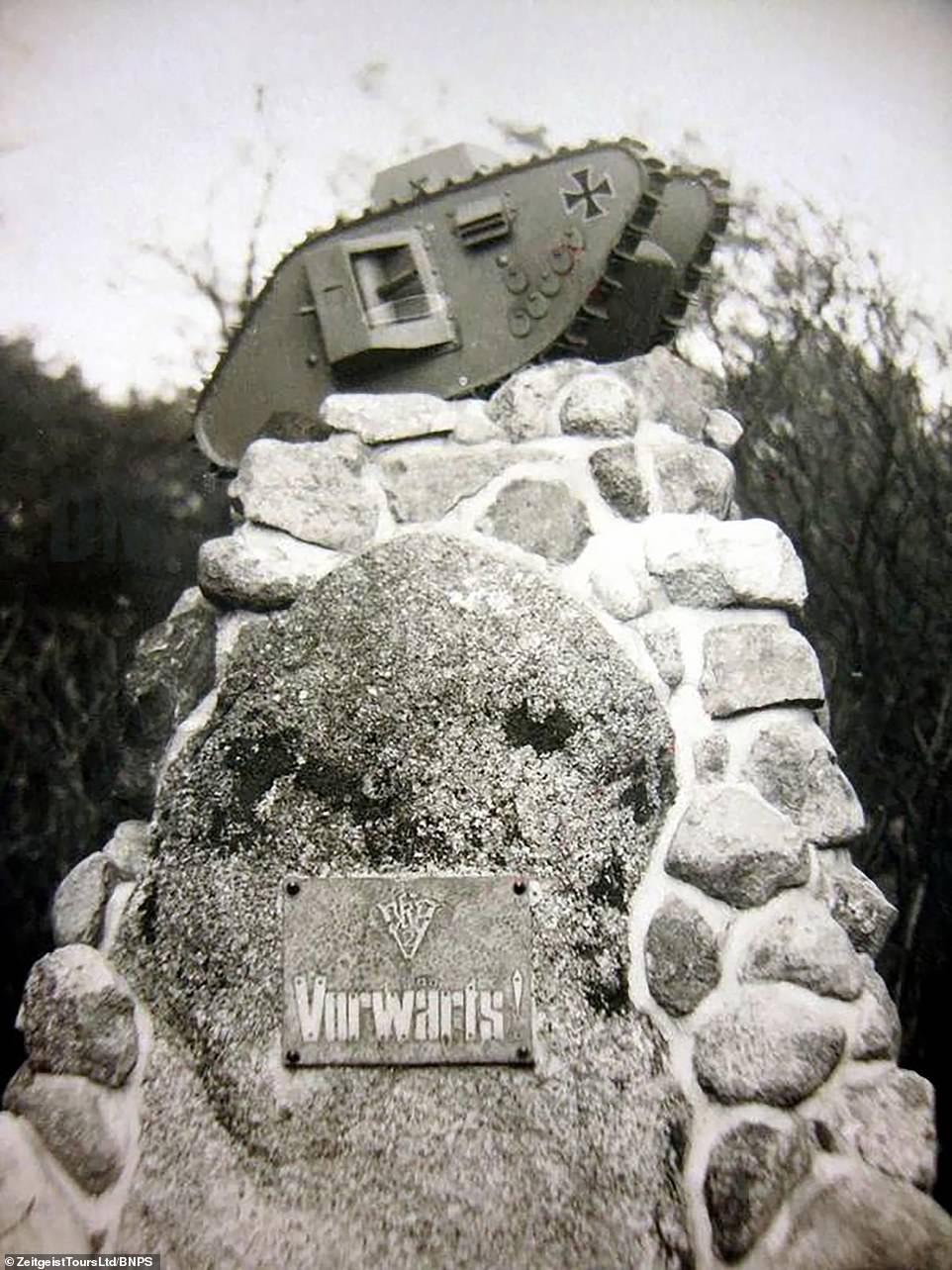 ‘They didn’t see tanks as being influential. Yes they were used at the Battle of Cambria but the Germans re-took the ground they lost four weeks later without tanks.

‘Also, for early tanks to have any impact many of them had to be used as a lot of them broke down or were knocked out.

‘The British committed 476 tanks at Cambrai and afterwards 71 of them lay on German held ground.

‘So rather commit resources on producing tanks for scratch they repaired and refurbished the Allied tanks.

‘Up until March 1918 more than 50 British tanks had been assembled and made operational.

‘These tanks would form the backbone for the future German Panzer Division leading up to the Second World War.’

BRITISH TANKS AND HOW THEY GOT THEIR NAME

Why were tanks called tanks?

Tanks came by their name out of a need to be subtle about the new equipment coming to the battlefield. British commanders didn’t want their enemies to guess what they might be about to face, so called the machines ‘water carriers’ as a code name.

It didn’t take long before the name was shortened to ‘tanks’, and it stuck.

Developed from the Little Willie tank prototype, this was the first British Tank to enter the battlefield in the First World War. Officially, they were called His Majesty’s Land Centipede. They first trialled in April 1916.

They were more than 32ft long including their tail and 8ft wide, and carried eight crew members. They travelled at 3mph.

In total, 150 of these machines were produced.

Superficially identical to the Mark I, there were some key upgrades needed in the first model to benefit the battlefield. The Mark II and Mark III were stopgaps while better improvements were made and were used by training groups only.

This model was the true successor to the Mark I, and was a great improvement, with better protection. It weighed between 27.5 and 28.4 tonnes, depending on whether it was female or male, and more than 1,200 of these were produced.

It could carry eight crew members at a speedy 4mph. The tank was first used at Messine Ridge in June 1917, then later in the year at Cambrai, where the large number of tanks proved to be instrumental in the battle.

A judge cleared the way for a homeless shelter in one of NYC's wealthiest neighborhoods, dismissing a lawsuit filed by residents of Billionaire's Row