Los Angeles: A coronavirus variant recently determined to be a “variant of interest” has been detected in 167 people over the summer in Los Angeles County, officials said.

The variant now known as Mu was mostly detected in July, according to analyses completed between June 19 and August 21, the Department of Public Health said. 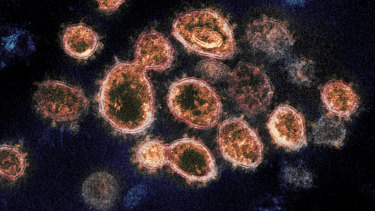 This electron microscope image provided by the US National Institute of Allergy and Infectious Diseases shows SARS-CoV-2 virus particles isolated from a patient, emerging from the surface of cells cultured in a lab.Credit:AP

Named after the 12th letter of the Greek alphabet, Mu was declared by the World Health Organisation as a “variant of interest” on August 30, and was first identified in January in Colombia, the department said. Mu, also known as B.1.621, has since been reported in 39 countries.

The US Centres for Disease Control and Prevention, however, has not labelled mu a variant of interest.

Variants of interest are not considered as much of a potential threat as so-called “variants of concern,” which include Delta. Delta is now estimated to comprise more than 99 per cent of the variants circulating in the United States.

The Delta variant displaced alpha as the nation’s most dominant strain at the beginning of the summer.

Dr. Anthony Fauci, President Joe Biden’s chief medical adviser for the pandemic, has said mu is important to monitor, even though it is rarely seen in the United States.

“We’re paying attention to it,” Fauci said at a news briefing last week. “But we don’t consider it an immediate threat right now.”

Mu is different from another variant known as C.1.2, which was recently identified in South Africa. The World Health Organisation, however, has not placed C.1.2 on its list of variants of interest or of concern.

Another variant, lambda, has also attracted attention recently after being labelled a variant of interest by the World Health Organisation in June. Lambda, first documented in Peru in December, is worth watching, some scientists say because it has had spread widely in South America.

The CDC, however, has not labelled lambda as a variant of interest.

Dr. Ashish Jha, dean of the Brown University School of Public Health, tweeted that he doubted mu, lambda or C.1.2 will displace Delta as the nation’s dominant variant.

“I don’t lose sleep over new variants,” Jha wrote. “I worry about people’s fatigue with the current one.”

The Bitcoin Bridge: MetaID wants users to take control of their data

Sen. Hagerty picks up 'shock' from US allies over Biden's Afghanistan exit
Technology