A Northampton sandwich factory where almost 300 workers have caught Covid-19 is still open – despite warnings of a local lockdown.

Greencore, which supplies M&S, said production is ‘continuing as usual’ at the plant and said it had no concerns about any of its products.

Some 292 employees at the factory on Northampton’s Moulton Park Industrial Estate have tested positive for the disease and are self-isolating.

But local health chiefs fear further testing will find up to 100 more cases, with results from around 400 staff yet to come back.

Lucy Wightman, Northamptonshire County Council’s director of public health, said  1,300 of the 2,100-strong workforce had already been swabbed for the virus.

The firm, thought to be the world’s largest maker of sandwiches, took the decision to proactively test workers as a result of a rise in cases in the town.

There were 85 new cases diagnosed there last week, up from 66 in the week before. And Northampton is one of 29 places on Public Health England’s watchlist. 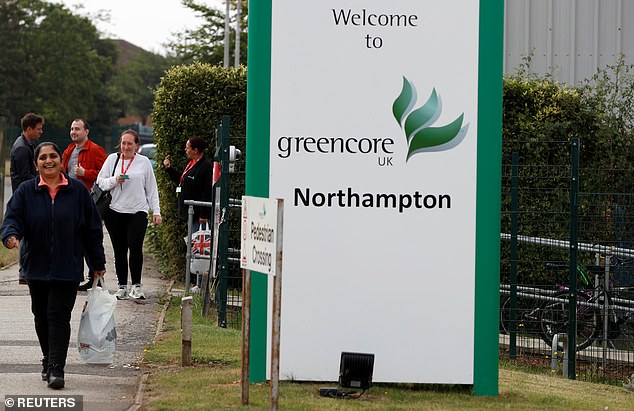 Greencore, which supplies M&S, said production is ‘continuing as usual’ at the plant and said it had no concerns about any of its products. Members of staff are pictured outside the factory today 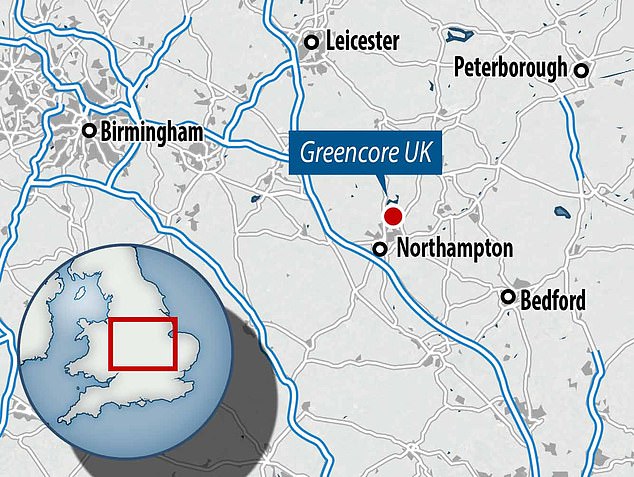 Northampton is listed as a ‘concern’ by PHE, which today published a list of 29 areas that have worrying levels of coronavirus.

As a result of Northampton’s status, Greencore said it was testing staff itself rather than waiting for them to get NHS tests.

The first four cases were identified on 28 July, with a further nine cases on 3 August leading Public Health Northamptonshire to ask workers to get tested.

As news has emerged of food factories around the world experiencing outbreaks of Covid-19, experts have suggested conditions inside the plants may be conducive to the spread of the virus.

Dr Simon Clarke, a cellular microbiologist at the University of Reading, told MailOnline that it was notable that food factories seemed to have been the centre of outbreaks more than other factories where people might be close together.

He said: ‘There are problems in this country, in Germany, in the United States. There is something common between them – it’s not happening in engineering or clothing factories where you also might expect people to be in close proximity to one another.

‘One assumes – but it’s just an idea – that the cold environment makes people more susceptible to the virus.

Dr Chris Smith, a virologist at the University of Cambridge, said on LBC ‘temperature is going to play a part’.

He explained: ‘When I’m breathing I’m blowing out droplets of moisture from my respiratory tract and the virus which is growing in there would be packaged up in the droplets.

‘Now the droplets will hover for a period of time in the air and then sink to the ground… and if it’s very dry, cold air – and cold air carries less moisture, remember – the droplets will stay smaller and stay airborne for longer.

‘If it’s very humid, moisture joins them, makes them bigger and heavier, and they fall and they drop out of circulation faster – so temperature could be a factor.’

Sunlight is also known to degrade viruses and make them less able to survive on surfaces that are exposed to UV light.

Rays of sunlight are thought to damage the genetic material inside the virus, making it less able to reproduce and killing it faster.

Professor Calum Semple, a disease outbreak expert at the University of Liverpool, told The Telegraph that cold, sunless food factories are ideal conditions.

He said: ‘If I wanted to preserve a virus I would put it in a cold, dark environment or a cool environment that doesn’t have any ultraviolet light – essentially a fridge or a meat processing facility…

‘The perfect place to keep a virus alive for a long time is a cold place without sunlight.’

But the temperature alone does not appear to be a controlling factor in coronavirus outbreaks.

Dr Michael Head, a global health researcher at the University of Southampton, said he thought close proximity was most likely to be behind the factory outbreaks.

He said: ‘Whilst refrigeration may be a contributory factor to the spread of the virus, the key factors are likely to be the number of people close together in indoor conditions.

‘Some of these factories have onsite or nearby accommodation where there are several people in each dormitory, they may be transported on a bus to the site of work, and they will be indoors together all day.

‘Levels of adherence to measures such as washing hands is uncertain and there is unlikely to be widespread use of PPE.’

A further 213 were spotted through Greencore’s swabbing scheme.

In a statement yesterday, Greencore said: ‘As a result of the rising number of Covid-19 cases in the Northampton area, we took the decision to start proactively testing all of the colleagues at our Northampton site.

‘We can confirm that a number of colleagues have tested positive for the virus and are now self-isolating.

‘We are liaising closely with PHE East Midlands, Northamptonshire County Council and Northampton Borough Council, who are fully supportive of the controls that we have on site.

But Greencore said production at the plant was ‘continuing as usual’ and it had no concerns about its products, according to the BBC.

Ms Wightman said: ‘It is evident that Greencore has highly effective measures in place and they continue to work extremely hard to exceed the requirements needed to be Covid-19 secure within the workplace.’

The company confirmed to MailOnline it was still operating on the basis that Covid-19 does not spread via food packaging. It did not comment on the spread of the virus among staff or in the county.

A spokesperson said: ‘All of Greencore’s sites have wide-ranging social-distancing measures, stringent hygiene procedures and regular temperature checking in place, and we are doing everything that we can to keep our people safe.

‘As ever, the health and well-being of our colleagues is our number one priority.’

The Food Standards Agency says it is ‘clear that it remains very unlikely that people can catch Covid-19 from food. Covid-19 is a respiratory illness and not known to be transmitted by exposure to food or food packaging’.

Food factories have hosted an unusually high number of Covid-19 outbreaks around the world and experts say the cold, sunless environments, cramped working conditions and staff who are more likely to use public transport may be ideal for the virus to spread.

The company said yesterday: ‘In each case we have immediately conducted contact tracing and instructed potentially affected colleagues to self-isolate.

‘As ever, the health and wellbeing of our colleagues is our number one priority.’

It added: ‘Northampton borough has been experiencing a high number of cases over the last four weeks and residents and employees have been asked to “act now” to follow additional measures, to avoid a local lockdown or further government intervention.’

The worst affected areas of England — mostly in the North West and including Leicester — are in an ‘intervention’ category and have their own lockdown rules that are stricter than the rest of the country.

Northampton is not at this level yet — it has an infection rate of 29.8 new cases per 100,000 people each week, according to the most recent data.

This compares to a rate of 80 cases per 100,000 in the worst-affected part of the country, Blackburn.

But with a sudden increase of 300 cases in the area, it will take the infection rate high – which won’t be seen in the data immediately.

Ms Wightman said: ‘Public Health England Midlands have been providing support to colleagues at Greencore in managing the outbreak.

‘This has been supplemented by support from the local infection prevention and control team and Northampton Borough Council’s environmental health colleagues.’

She added: ‘It is evident that Greencore has highly effective measures in place and they continue to work extremely hard to exceed the requirements needed to be Covid-19 secure within the workplace.’

The county’s director of public health revealed there are currently 20 different Covid-19 outbreaks in the county, Chronicle & Echo reported.

Twelve are in care home settings, there are three hospital outbreaks and the rest are in workplaces.

Ms Wightman noted there was a link between the contagion spread and deprivation levels as well as car sharing.

Local lockdowns have not been imposed on all of the areas. Leicester, Blackburn, Preston and Aberdeen are under strict rules, along with a wider area around Greater Manchester and Lancashire where rules are tighter than they are elsewhere in the country.

Beyond the S&P 500: Traders highlight best opportunities in global markets

Companies With the Best and Worst Reputations
Technology