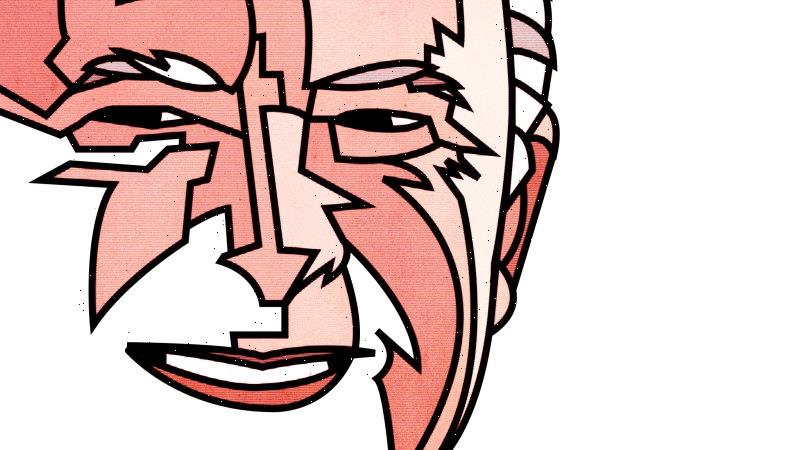 There was a moment during his whirlwind round of breakfast TV interviews on Thursday morning, hours after his return from Japan, when the nation’s new leader still seemed to be pinching himself.

“It really hit home when people start to call you prime minister and you realise that you are not looking around for someone else, it’s actually you” he told the Sunrise audience.

Momentary astonishment at one’s own elevation is not what we’re used to hearing from national leaders – certainly not from a Morrison, Turnbull, Abbott or Rudd. 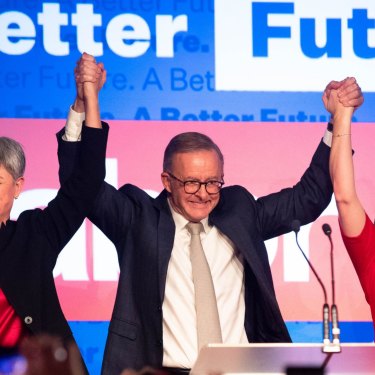 Anthony Albanese is by no means ordinary – no-one who gets themselves to the top of the Australian Labor Party could be labelled ordinary – but in these early days, at least, he is more ordinary-seeming than the recent run of prime ministers.

Over the course of a tortuous six-week election campaign there were quiet doubters within his own ranks who worried that he would not pull it off. The early stumbles rocked his team; others were concerned the party’s modest policy offering was too thin.

Now there is growing conviction on the Labor side that Albanese’s “everyman” quality could turn out to be a core prime ministerial strength.

Lachlan Harris, a former senior staffer to Kevin Rudd, had concerns about Labor’s small-target strategy coming into the election.

But he says “Albanese’s authenticity, his approach to politics in a more organic, raw, true-to-himself way, could actually serve him incredibly well in the prime minister’s office”.

“We have had an era of hyper-professional, hyper-scripted and politically predictable politicians on both sides,” Harris says. “He is a break with that. His deep and abiding authenticity and real empathy for people … is his greatest political asset and you can build a prime ministership around that.”

Tony Burke, who served in the Rudd and Gillard governments alongside Albanese for six years, and is in line to become a cabinet minister, predicts “there will never be another Bob Hawke, but Anthony is the closest we will see to a Hawke both in leadership style and in authenticity”.

Albanese’s start in the top job was literally a flying one, heading off to meet the leaders of the other Quad nations – the US, Japan and India – within hours of being sworn in on Monday.

His performance in Tokyo – closely watched by colleagues, the media, public service chiefs, business leaders and Australia’s “friends” (and no doubt enemies) abroad – has been more than creditable.

“The timing could not have been better,” says one jubilant staff member, adding that few newly elected leaders get the chance to establish themselves so quickly on the world stage.

On other fronts the new government is also moving fast, despite the fact that the full ministry (to be confirmed after a caucus meeting next week) has yet to be sworn in.

New foreign minister Penny Wong has been dispatched to the Pacific to try to head off further regional security inroads by Beijing. Albanese has instructed his department to prepare a submission to the Fair Work Commission on ensuring the lowest-paid workers will not “go backwards” (although there will be no specified figure, despite his seeming endorsement of a 5.1 per cent rise during the campaign). 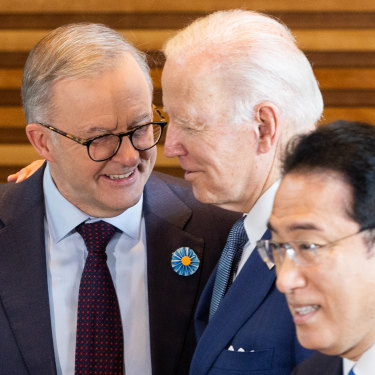 Off to a flying start: Prime Minister Albanese with US President Joe Biden, Japan’s Prime Minister Fumio Kishida and Prime Minister of India Narendra Modi after the Quad leaders’ summit in Tokyo on Tuesday.Credit:Alex Ellinghausen

On Friday, in a symbolically important decision, it was announced that the long-suffering Murugappan asylum-seeker family would be allowed to return to the Queensland town of Biloela. Early steps are being taken to put in place an anti-corruption commission and keep faith with Indigenous Australians by embracing the Uluru Statement from the Heart.

Albanese is talking up the language of “respect” towards his opponents, saying: “I want to change the way that politics operates in this country. I want it to be more inclusive”, and flagging that he expects to get on better with soon to be anointed Liberal leader Peter Dutton than he did with Scott Morrison. Notably, he chided Tanya Plibersek for comparing Dutton to Voldemort, the villain in the Harry Potter series (for which she swiftly apologised).

Former ministerial colleague Craig Emerson says “there will be the theatre of parliament, but he does not like what has been going on [under the former government] which is ‘let’s find a group in the community we can vilify and let’s get some votes out of it’ – he has a genuine and dearly held set of values, fundamentally the value of decency”.

Yet there is no underestimating the difficult challenges ahead. Labor has to rebuild from a historically low primary vote of around 32 per cent.

Despite Albanese’s election campaign promise of a “better future”, incoming treasurer Jim Chalmers is sounding more like a prophet of doom, warning that “the fiscal situation we are inheriting is dire”.

Joining the dismal queue of economic challenges are looming energy hikes for households and small business, spiralling inflation, eye-watering deficits, real wages still not keeping up with the cost of living, and the threat of more interest rate rises.

The head of the Australian Industry Group, Innes Willox, says it will be “natural that an incoming government is going to blame an outgoing government for all of these problems. [But] the blame game realistically lasts for about six months before people say, ‘that’s fine, but what have you done about it’?”

Willox says all the dealings his organisation have had with Albanese have been “positive, open and consultative” and that industry has taken particular note of several speeches in which the Labor leader has said that for his party to be successful, it needs strong relationships with the business community.

“There is no reason not to expect a strong and collaborative relationship… and strong lines of communication,” Willox told The Sydney Morning Herald and The Age. But he warned of “potential fault lines” over workplace relations, and re-aligning the migration program to meet the country’s “massive labour and skills shortages”.

The most immediate political challenge Albanese faces will be withstanding pressure to increase Labor’s 2030 carbon emissions target in the face of a surge in electoral support for the Greens and the teal independents in previously heartland Liberal seats in Sydney and Melbourne, for whom tougher action on climate is a cardinal issue.

Labor looks to be on track to secure 76 or 77 seats in the lower house, giving it a narrow majority, but in the Senate will likely need support from an expanded cohort of 12 Greens in the event of clashes with the coalition.

Albanese said on Friday that he would treat the Greens and Senate “with respect”. But he is digging in on his party’s target of cutting Australian emissions 43 per cent by 2030, despite warnings from climate scientists around the globe that more urgent action is needed.

Bob Carr, the former NSW Labor premier and foreign minister under Kevin Rudd, says “it’s not beyond the wit of the Albanese cabinet to push the boundaries of climate action. For example, in the commitment to electric vehicles or in co-operation with enlightened farmers; they’ve got to surgically remove from the budget Morrison’s crackpot subsidies for carbon, and [subsidies] for the great white whale of carbon capture and storage which doesn’t work anywhere”.

Emerson says it would be “completely implausible” for Albanese to alter the agenda on climate he took to the election. “He is not going to say ‘we said one thing before the election but now we have won, and tricked you, and we will do something else’.”

To garner insights into how the 59-year-old will operate as prime minister, the Herald and The Age canvassed the views of a number of Labor insiders who worked alongside him during his years as a minister in the Rudd and Gillard governments and later on the opposition frontbench.

Ascension to the prime ministership represents a massive step change, even for someone with Albanese’s long experience. “Going from a ministerial office to the PMO (prime minister’s office) is like going from level 3 to level 50,” says a former staffer. “It’s the scope of what you need to be across, the incoming from media, from stakeholders, from agencies, from cabinet ministers and then caucus, you really are at that apex.”

During the Rudd years, Albanese was seen to have delivered consistently inside government. “There were people who were just considered GSD ministers – as in Get Shit Done – and he was definitely one of them,” says a former insider. 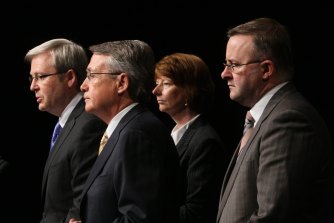 However, another queried whether his sticking for years with portfolios he knew well suggested a certain degree of policy incuriosity.

During the campaign doubts surfaced about his ability to quickly ingest and command a brief though critics are giving him the benefit of the doubt at this early stage. He has looked unfaltering in the days since his elevation.

Greg Combet, who worked alongside Albanese in the Gillard cabinet as climate change, energy and innovation minister, thinks Albanese will be “a great prime minister”.

“He knows how to get the information he needs. That’s what a leader needs to be able to do, they don’t need to be inside every nook and cranny of policy detail,” he says.

“As leader, you’ve got to understand the commanding heights of it all, where the land lies, and rely on upon others. He will be more like Hawke in how he runs the cabinet. There is a pile of talented people [in the proposed ministry] that have had ministerial and cabinet experience. You will see really capable people now shining as ministers. 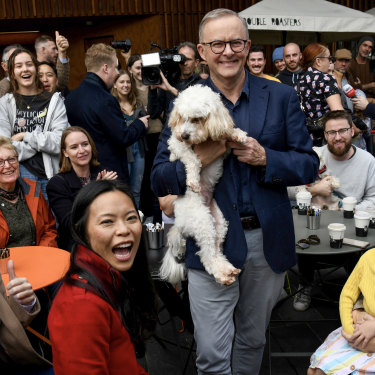 The morning after the election night before: Prime Minister Anthony Albanese with Toto and well-wishers at the Marrickville Library.Credit:Dean Sewell

“Anthony Albanese will encourage that, he will not be threatened by that, he will want that to happen because it makes for better government.”

One vital experience Albanese will bring to the more multi-hued parliament is the years he spent as leader of the house in the minority Gillard government, liaising closely with a small group of independents to keep the government undefeated on the floor of parliament.

“He had enormous diligence in that role when [then opposition leader] Tony Abbott would be seeking the destruction of Julia’s government,” says one former minister. “He was excellent at reaching out to other political forces.”

Tony Windsor, one of the independents who supported Labor during that period, told this masthead, “Albanese was not a Gillard supporter [after the internal Labor coup which dislodged Rudd]. He was a Rudd supporter. But in the hung parliament, no one worked harder than him to keep Julia Gillard in office. I marvelled at that. It was a day to day [effort] keeping the house working on a paper-thin minority and I came to have a high regard for him as time went on because of that”.

Now Albanese has reached the summit of Australian politics, some inside Labor believe he would benefit from factionally broadening what will be an expanded office, saying the perception had developed among some right-wing MPs that there had been a “closed shop” while he was opposition leader. “This is a real opportunity for him to re-set that,” says a former staffer.

Among his friends, there is relief that Albanese has partner Jodie Haydon by his side as he embarks on the journey ahead. “To do this on your own would be absolutely crushing,” says one.

The challenges will accrue swiftly enough. But for now, Albanese can relish his status as a Labor hero, joining the rarefied pantheon of those who have led the party out of years of opposition.