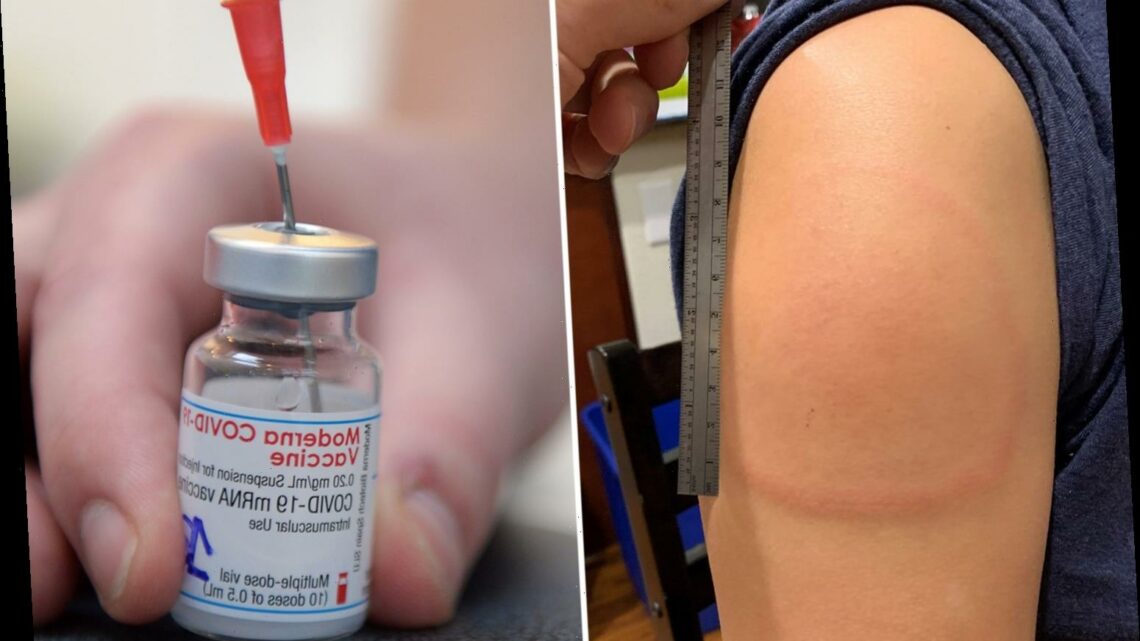 Moderna vaccine causing ‘Covid arm’ side effects in some patients

MODERNA’S vaccine is causing a rash on some people’s arms after injection.

The side effect, dubbed “Covid arm”, appears around a week after receiving a dose and affects very few patients, doctors say. 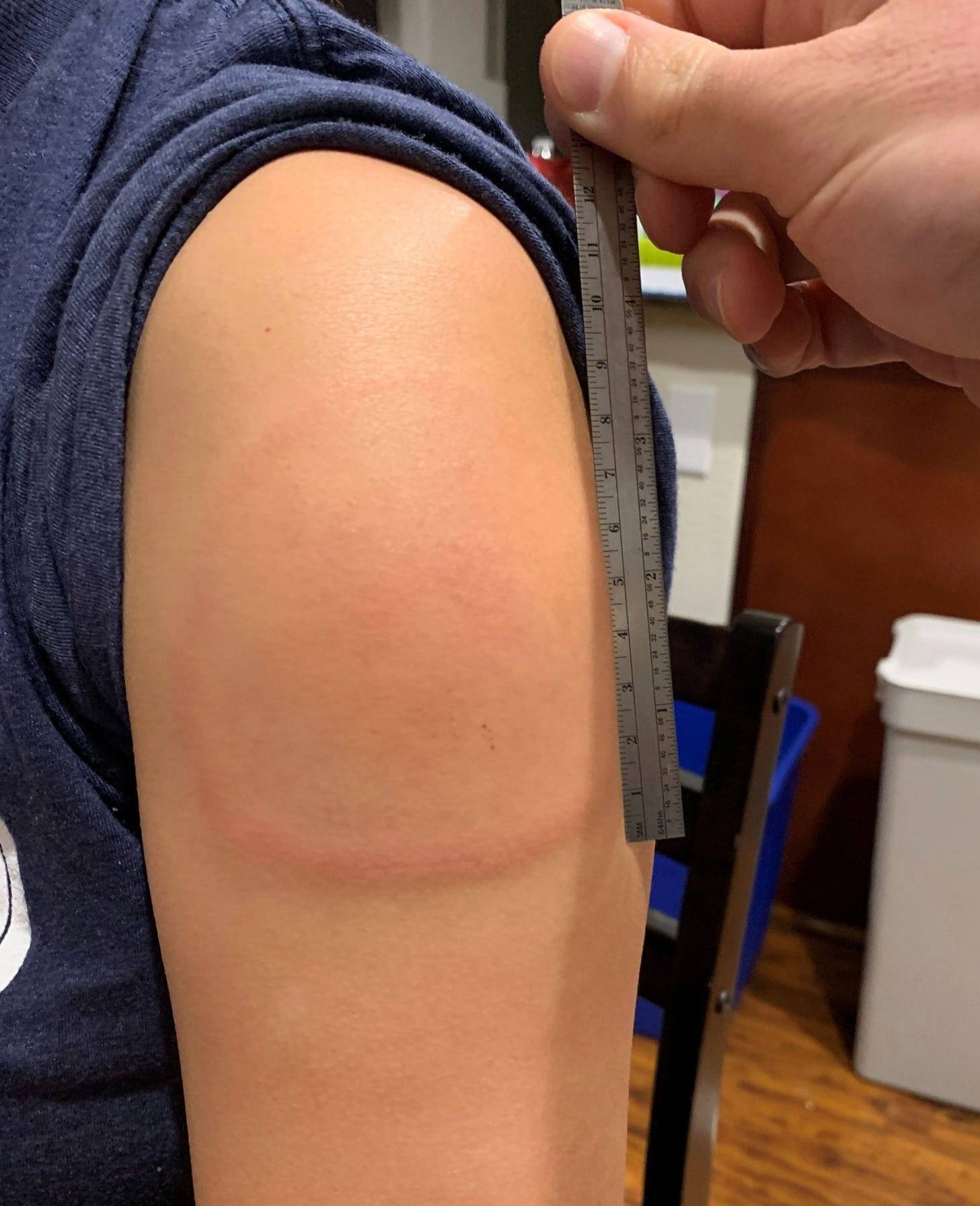 But they stressed that people with the harmless reaction should still get their second dose of the jab for optimal protection against Covid – around 95 per cent for the Moderna jab.

The Moderna vaccine is being dolled out in the US after authorisation in December, but is not expected in the UK until March.

It uses the same mRNA technology as the Pfizer vaccine, which has been given to millions of Britons.

"Having a big red splotch on your arm for a couple of days may not be fun but the reality is there's no need to panic and no reason not to get your second shot."

Amelia Brown, who lives in Visalia, California, got her first Moderna vaccine dose on January 11.

Shortly after her jab, Amelia began to feel dizzy and had a minor allergic reaction, she told FoxTV.

Then, a week after her first dose, Amelia said her arm was “just red and angry and had hives”.

The next morning, Amelia says she woke up with a lump.

“It had just grown overnight from like, a dollar size to like, a baseball size," Amelia said.

"And it was very swollen, hot to the touch, sore, even if I wore my coat that day, the pressure of the coat was painful."

Worth it for protection

Amelia said the experience led her to consider avoiding her second dose.

But officials have reminded people that some minor side effects, such as a sore arm or light skin rash, are worth the benefit of being protected against a disease.

And it's often a sign that the body has reacted appropriately to the vaccine.

Dr Praveen Buddiga, an immunologist where Amelia lives, said: “Your immune response is responding and in some cases, some patients have a very hyper or really aggressive immune response. 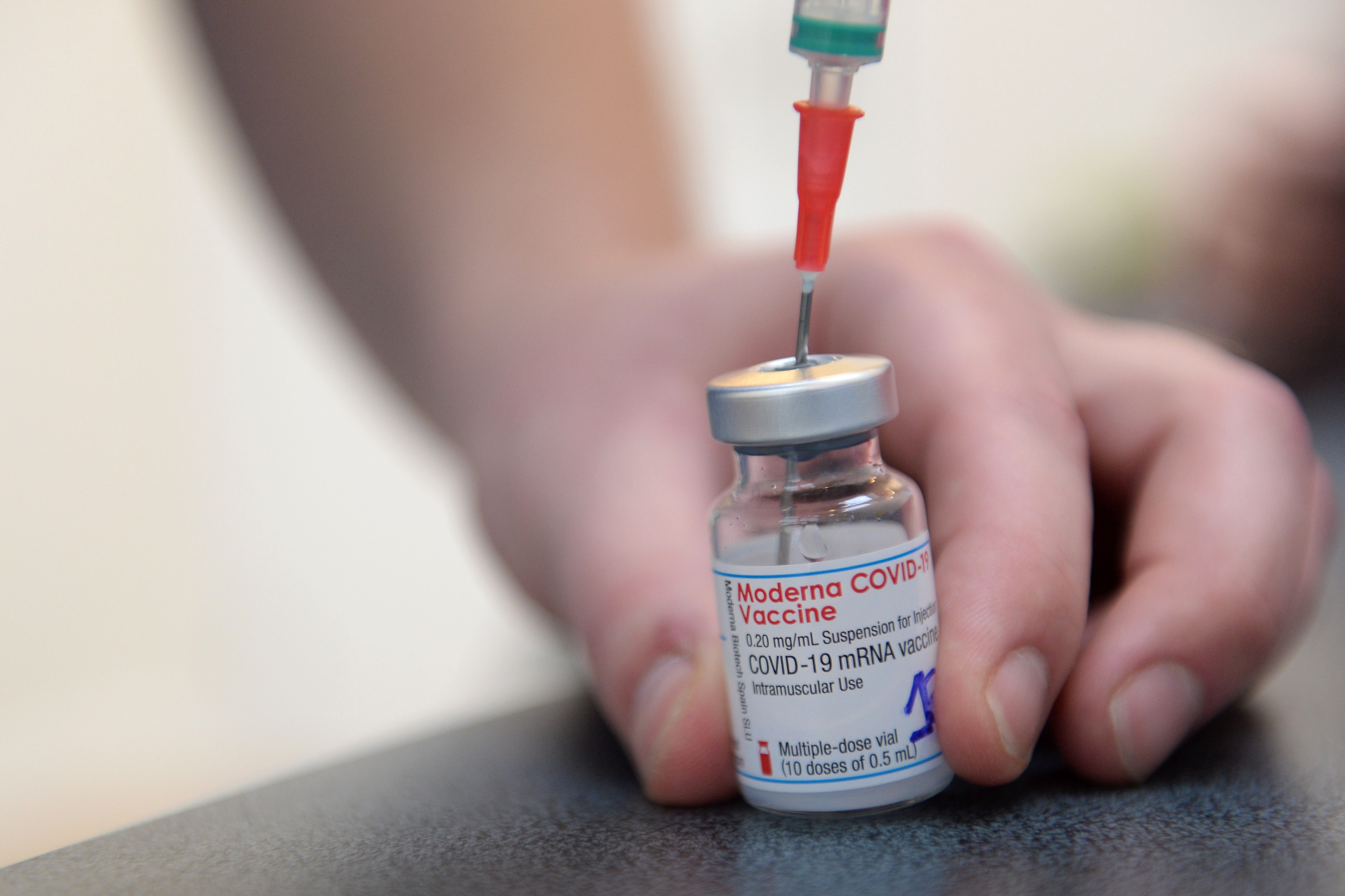 What side effects could happen after a Covid vaccine?

According to the NHS, most side effects of the Covid-19 vaccine are mild and should not last longer than a week, such as:

If you have a high temperature you may have coronavirus or another infection.

If your symptoms get worse or you are worried, call 111.

If you have a history of allergic reactions

The NHS says tell healthcare staff before you are vaccinated if you've ever had a serious allergic reaction.

You should not have the Covid-19 vaccine if you have ever had a serious allergic reaction (including anaphylaxis) to:

The approved Covid-19 vaccines do not contain any animal products or egg and those who have food allergies are allowed to get a jab.

The NHS says all vaccines are thoroughly tested to make sure they will not harm you or your child.

It often takes many years for a vaccine to make it through the trials and tests it needs to pass for approval.

But scientists have been working at speed to develop a Covid jab in under one year.

This has been possible because of huge funding, global collaboration, and because there was high transmission of the virus globally to test it.

Experts have said "no corners have been cut" in testing Covid vaccines.

Once a vaccine is being used in the UK it's also monitored for any rare side effects by the Medicines and Healthcare products Regulatory Agency (MHRA).

"'Covid arm' is basically a delayed type of hypersensitivity or an allergic reaction that occurs about probably seven to ten days afterward.”

He said he sees this in about two to nine per cent of patients – but the FDA report a much lower figure from clinical trials.

It comes after reports of another unusual and very rare Moderna side effect in people who have had facial fillers.

Those with fillers in their cheeks and lips ended up with swelling and inflammation but were treated with antihistamines or steroids, it was reported in December.

What side effects to expect after a vaccine

Around half of people who had the Moderna vaccine in clinical trials last year experienced side effects, meaning they are not uncommon.

A paper from the agency in December revealed only 1.4 per cent of people had a skin reaction to the jab, and very few were severe.

Moderna’s vaccine, which the UK has secured 17 million doses of, uses the same technology as the Pfizer, the first jab to be rolled out in the UK.

But there have not been reports from health agencies of skin rashes using the Pfizer jab – which the FDA said had the same common side effects as the Moderna vaccine.