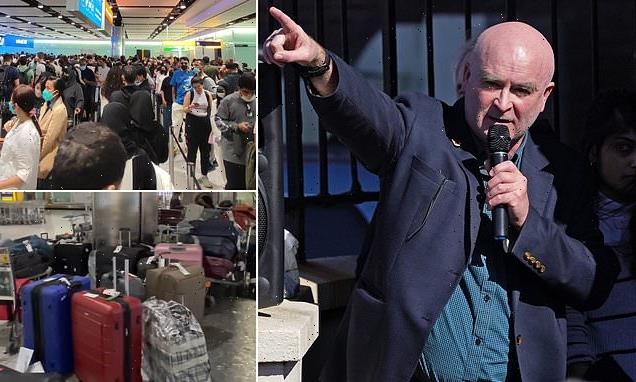 Militant unions continue with plans to hold nation to ransom

The day that could decide the fate of the Summer of Discontent: Travel bosses face down militant unions as they choose dates of walkouts on national railways AND vote on strike action at airports

Unions are threatening to launch a Summer of Discontent as the ‘biggest ever’ rail strike coincides with hundreds of British Airways staff walking out at Heathrow.

The hard-Left RMT union, which organised a 24-hour Tube strike that caused chaos for London commuters yesterday, is currently in talks to decide the dates for a series of railway walkouts and is expected to announce the outcome later today.

Members of the Unite and GMB unions are being balloted in a dispute over pay which could cause yet more chaos at the UK’s busiest airport during the summer holiday period. 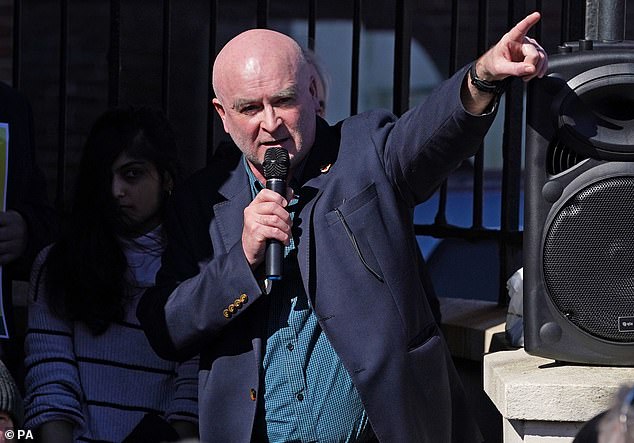 Mick Lynch, boss of the militant RMT union, which is planning a wave of rail strikes this summer 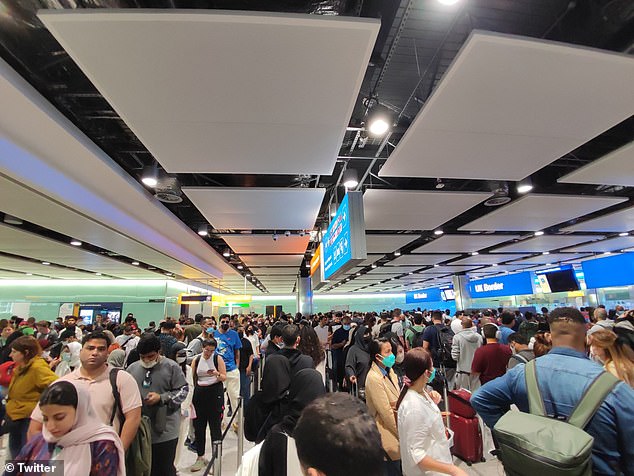 A proposed walkout at Heathrow coincides with chaos at UK airports (pictured: a queue of travellers at the border) 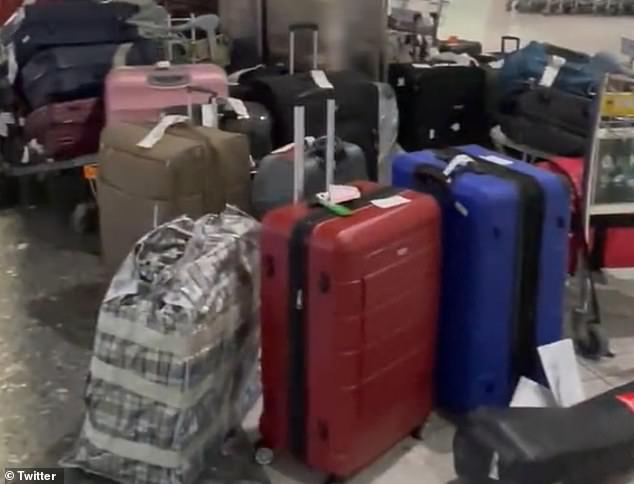 Today, travellers complained there were ‘no staff’ at Heathrow’s baggage enquiries desk

GMB says it is taking action after a ten per cent pay cut imposed on check-in and ground staff during the pandemic has not been reinstated – despite bosses having their pre-covid pay rates reinstated. The ballot ends on June 23.

Summer of Discontent: Fears mount over a repeat of the infamous winter of 1978 as slew of strikes set for coming months

Fears are mounting of a repeat of the 1978 ‘Winter of Discontent’ in which a slew of strikes by waste workers, gravediggers and lorry drivers resulted in squalid conditions for Brits under Labour PM Jim Callaghan.

It comes as unions have threatened a national rail strike which could see Network Rail forced to operate on a skeleton timetable to reserve tracks for the movement of goods – with passengers only having access to key services.

Civil servants have also threatened national strike action that could bring disruption to key infrastructure such as ports, courts and airports, after being offered a 2 per cent pay rise, which they deemed as insufficient amid the ongoing cost of living crisis that is currently causing inflation levels of 9 per cent.

The head of the Transport Salaried Staffs’ Association, Manuel Cortes, threatened the biggest disruption since the General Strike of 1926.

But it is not only the railways that are set to be massively disrupted by strikes in the coming months. Holidaymakers travelling through Heathrow this summer will have to prepare for delays and slower service, as the GMB Union is balloting for strikes to take place at the airport. 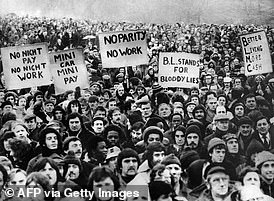 The move would heap more misery on British holidaymakers who are already suffering under a wave of cancelled flights that have left many stuck abroad for days unable to get home.

RMT boss Mick Lynch has boasted that the rail strike would be the ‘biggest in history’ and would last for a ‘very, very long time’. There are fears they could even cause blackouts by stopping freight trains supplying critical power plants.

Ministers are now attempting to head off strikes on the railways by seeking a deal with union leaders, it is understood.

Industry sources say talks with the union have been ‘intense’ in recent days as all sides work towards resolving a row over pay and jobs.

Transport Secretary Grant Shapps is understood to support a pay rise of as much as 5 per cent for thousands of rail workers in a bid to head off a summer of strikes.

It comes after 4,000 London Underground staff walked out for 24 hours yesterday, leaving workers battling to get on buses and into taxis, with ride-hailing service Uber ramping up its prices. Some services were running, but the majority of stations shut.

Construction worker Miguel Basantes was stranded at Paddington station. The 54-year-old described the situation as ‘chaos’. ‘In Liverpool Street there were crowds of people and I was waiting for 20 or 30 minutes. I don’t know how to get to work.’

Ministers want around £2billion shaved off the rail budget after bailing out the industry by more than £16billion during the pandemic.

TfL is cutting 600 jobs by not refilling roles when people retire or leave.

The union’s executive is due to meet today and could announce a series of strike dates after its members voted in favour of country-wide walkouts last month. But it may decide to continue talks.

RMT boss Mick Lynch said yesterday: ‘We will not rest until we have a just settlement to this dispute and we urge the Mayor [of London] to stand up to the Tory Government who are cutting funding to TfL, rather than try to pick a fight with tube workers.’

Although some ministers support a pay offer in principle, it will be dependent on how much modernisation of working practices the RMT is willing to accept.

The Treasury is said to be resisting any large increase, as it would mean lifting the public sector pay cap. This was set at 2 per cent in April, or 3 per cent in cases where ‘productivity gains’ can be delivered.

But the RMT has suggested it wants pay increases to be closer to the RPI rate of inflation, currently 11.1 per cent. 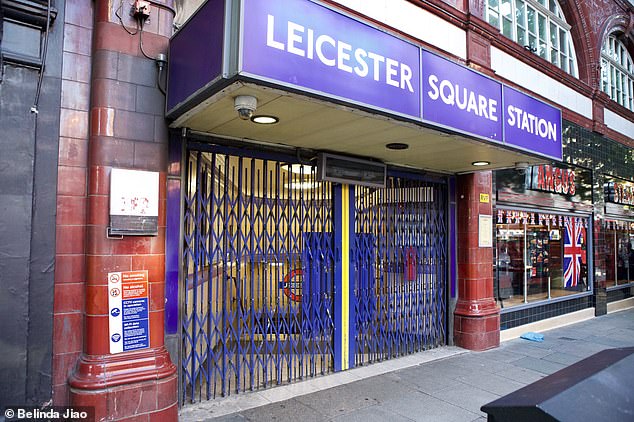 The union’s resistance to modernisation has been branded ‘absurd’, with one industry source last month revealing staff were blocked from using mobile phone apps to communicate during the pandemic. Ministers believe millions could be saved through modernisation.

The GMB union is overseeing the threat of action at Heathrow.

Nadine Houghton, its national officer, said: ‘Staff at Heathrow have been verbally and physically abused by angry passengers after British Airways’ staff shortages and IT failures nearly brought the airport to a standstill.

‘On top of that, they had their pay slashed during BA’s callous fire and rehire policy.

‘Now they want that money back. Bosses have had it back. Heathrow ground and check in staff want to know why they haven’t had it too. 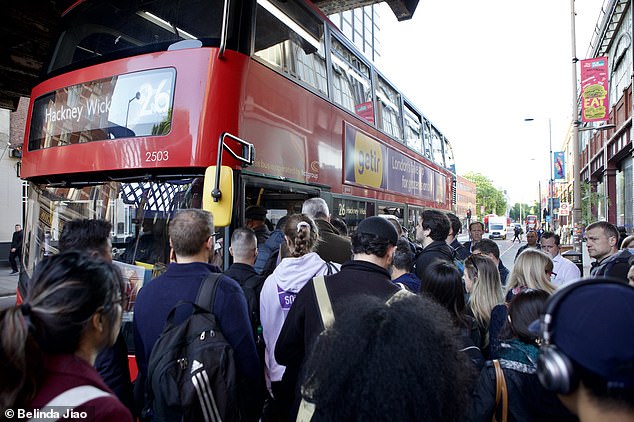 Huge queues seen at a bus stop outside London Waterloo on Tuesday morning. The strike continued until 8am, although some disruption lingered on afterwards

‘Unrest is now starting to spread like wildfire to other groups of BA workers with many more now considering a vote to walk out.

‘British Airways faces a gruelling summer of travel chaos if they won’t give these workers what’s rightfully theirs.’

Civil servants have also threatened national strike action that could bring disruption to key infrastructure such as ports, courts and airports, after being offered a 2 per cent pay rise, which they deemed as insufficient amid the ongoing cost of living crisis that is currently causing inflation levels of 9 per cent.

By Mark Duell for MailOnline

Thousands of British holidaymakers again faced chaos again at UK airports today as easyJet cancelled nearly 50 more flights, while other families stranded in Europe were scrambling to get home after being told there were no seats available on flights for several days.

Travellers crossed borders instead of waiting as they raced to return to work and school after half-term. Some whose flights were cancelled on Saturday were told it would take until Friday for the next available seats, and so were forced to spend hundreds of pounds for new flights or other modes of transport such as Eurostar trains.

Among them were teachers needing to get back to the classroom and A-level pupils who risk missing exams after easyJet cancelled more than 300 flights across Europe in the past three days, with more than 2,000 delayed. 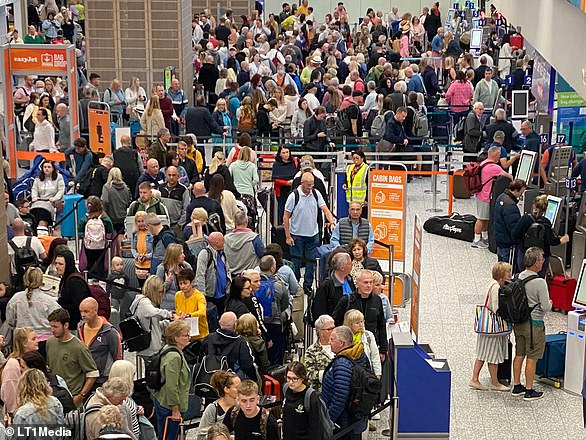 BRISTOL AIRPORT: Huge queues once again this morning at Bristol Airport which has been badly hit by the airport chaos

It comes as travel agents are being inundated with phone calls from customers fearing their summer holidays will be disrupted, with about a third of calls at present being from those worried about bookings for July and August.

Bristol Airport, which has been one of the worst-hit airports, was badly affected again today with a total of 16 easyJet cancellations – including seven departures to Split, Pula, Edinburgh, Inverness, Olbia, Bilbao and Geneva; and nine arrivals from Alicante, Palma de Mallorca, Luton, Edinburgh, Pula, Split, Bucharest, Inverness and Bilbao.

In Scotland, easyJet also cancelled four flights at Edinburgh and four flights at Glasgow today – all of which were arrivals or departures to Bristol or Amsterdam. At Inverness, one departure and arrival from Bristol were axed.

While the total number of cancelled easyJet flights at airports today is 53, the actual total is 46 because seven are duplicates – ie Edinburgh to Bristol is listed twice, once as an Edinburgh departure and once as a Bristol arrival.

Some 124 British Airways flights at London Heathrow Airport were cancelled today, although the airline stressed that affected passengers were given plenty of advance notice with these services all axed a few months ago. 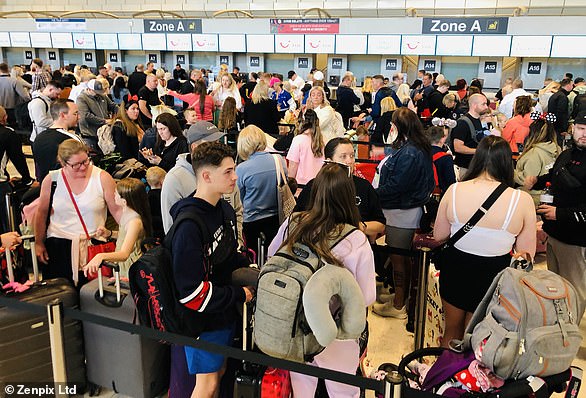 UK airline passengers have been hit by disruption for several months due to a lack of staff after the companies let thousands of people go during the pandemic. Airlines, airports and ground handling firms are now struggling to recruit new staff and have their security checks processed amid a surge in demand since restrictions were lifted.

Among those caught up in the chaos this morning was Diego Garcia Rodriguez, 32, a Spanish national who lives in Brighton. He told how passengers were left in tears at Gatwick due to the last-minute cancellations, adding: ‘I’m flying from Gatwick to Barcelona and I was at the airport three hours before but almost didn’t make it to board.

‘The flight hasn’t been delayed so far but I have seen lots of people whose flights have been cancelled, some crying and stressing out and they only got the news after having gone through the security control so they didn’t know how to get out. There was no information and it was all very chaotic.’

Meanwhile, hundreds of check-in and ground staff employed by British Airways at Heathrow began voting today on a summer of strike action. Members of the Unite and GMB unions are being balloted in a dispute over pay.