Police hauled away Extinction Rebellion activists lying in the road to block Boris Johnson’s route to Parliament today – as officers announced they’d made 160 arrests since the group began its fortnight of protests on Friday.

The arrests were made for a range of offences including breaching Public Order conditions, obstructing the highway, obstructing police and assault on an emergency worker.

Several activists had to be cleared from the road where they had been lying down in an attempt to block Mr Johnson’s route to Prime Minister’s Questions. 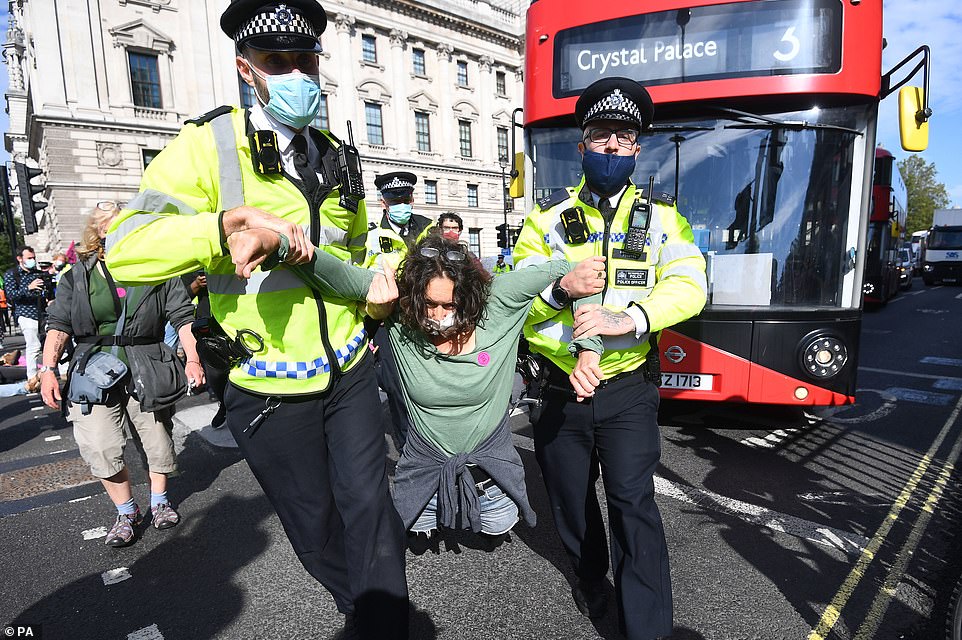 An Extinction Rebellion protester is removed by police officers in Parliament Square, London this morning as activists tried to block Boris Johnson’s route to the Commons 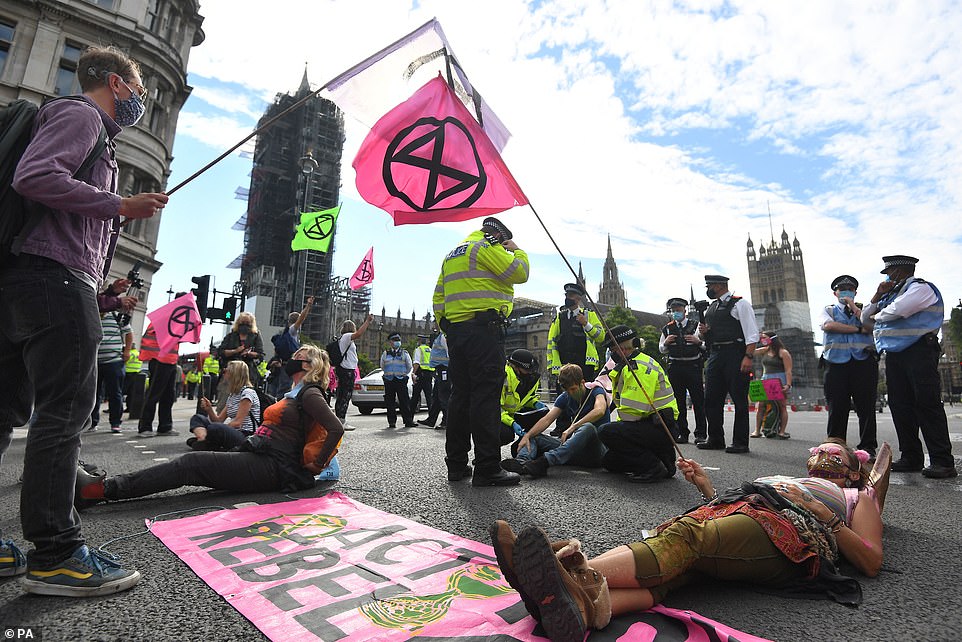 A frail 92-year-old man was among those arrested in central London yesterday.

John Lynes, the elderly demonstrator who used a walking stick, was surrounded by officers who escorted him to a waiting police van amid chaotic scenes in the capital.

Also yesterday, a wheelchair user ended up collapsed on the road and officers helped her back into her chair before wheeling her away from the road outside Westminster Abbey.

At least 10 people were carried away by officers after the group refused to move from the roads around Parliament Square.

Protesters chanted and cheered as the officers took them away to nearby police vans.

Demonstrators enjoyed a carnival-like atmosphere during the protest today, waving flags and banners including ‘Make Earth Great Again’ on their march down the Mall and into Parliament Square – with limited social distancing despite current Covid restrictions.

Similar rallies took place in Cardiff and Manchester, and come after XR protests planned for earlier in the year were cancelled due to the spread of the coronavirus.

MPs returned to Westminster yesterday after a summer recess, and protesters flooded to Parliament Square, lobbying them to support a ‘Climate and Ecological Emergency Bill’ and a citizens’ assembly to discuss new approaches to tackling climate change.

‘The government is failing to do what’s necessary to keep people safe. We are here, taking action, because their criminal negligence is putting lives at risk,’ the group said on its website.

‘We refuse to be bystanders and wait for this emergency to push beyond the point of no return.’ 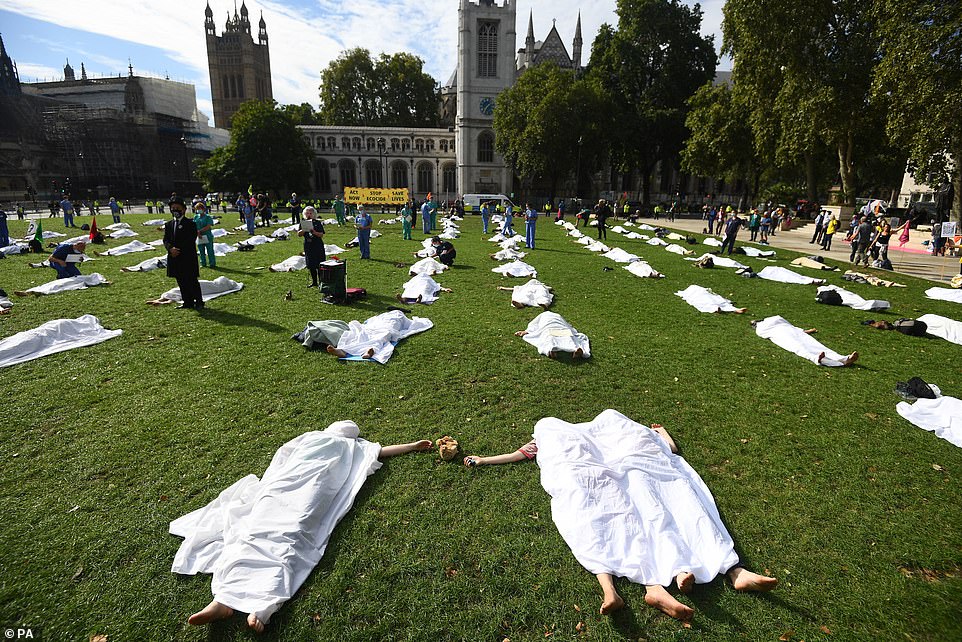 Four marches converged in Westminster after the Met had said the gatherings could only take place off the main roads at Parliament Square between 8am and 7pm.

The force said on Tuesday night that the same conditions would be imposed on further demonstrations planned today.

One protester, Karen Wildin, 56 – a tutor from Leicester – said yesterday: ‘I’m here today because I have serious concerns about the future of the planet – we need to put this above anything else.

‘Never mind Covid, never mind A-levels, this is the biggest crisis facing us and we need to raise the message as loudly as possible.

‘Not a lot has been done on this issue, everyone needs to hear the message.’

Sarah Lunnon, a prominent member of Extinction Rebellion, said: ‘The failure to act on this issue will have a catastrophic impact on the future of us and the generations to come.

‘We want to occupy Parliament Square to make our voices heard. Of course we’re in the middle of a pandemic but we’re balancing the risk, this is the biggest issue facing us.’

Responding images of the wheelchair user being escorted away, a Met Police spokesperson said: ‘On Tuesday, 1 September, officers noticed a female protester was sat next to her wheelchair at a protest in Parliament Square.

‘Officers spoke to her, checked on her welfare and offered assistance back into her chair, but she refused to move.

‘She refused to leave the area and was arrested for breach of conditions. She was taken to a south London police station where officers continue to provide appropriate support.’