MPs had expressed concerns the four-week England-wide shutdown ‘could deter’ people from making such a journey because of the Government’s stay-at-home message.

But the Health Secretary said the rules state that people leaving their home need a ‘reasonable excuse’ to do so and ‘travelling abroad for the purpose of assisted dying is a reasonable excuse’.

His comments came as MPs pressed for the Government to change domestic law on assisted dying.

Assisted dying is currently outlawed in the UK but it is legal for people to travel abroad for that purpose as long as it is allowed in the country they go to. 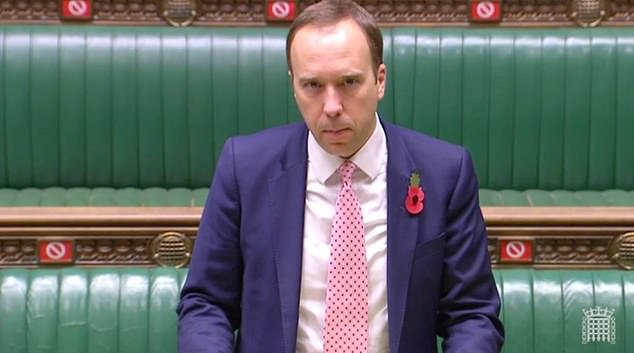 The matter was raised as an urgent question in the House of Commons this morning by Conservative former Cabinet minister Andrew Mitchell.

‘Travelling abroad for the purpose of assisted dying is a reasonable excuse and so anyone doing so would not be breaking the law.’

Mr Hancock added: ‘The question of how we best support people in their choices at the end of their life is a complex moral issue that, when considered, weighs heavily upon us all.’

The Health Secretary said Covid-19 regulations do not change the ‘existing legal position on assisted dying’ and said he wanted to set out the ‘precise position’ regarding the current law.

He told MPs: ‘Under current law, based on the Suicide Act 1961, it is an offence to encourage or assist the death of another person.

‘However, it is legal to travel abroad for the purpose of assisted dying where it is allowed in that jurisdiction.’

The pandemic has made how we care for people at the end of their lives ‘a central issue of public debate’, Mr Hancock said.

He added: ‘We of course do acknowledge the changing views of many, including many in the medical profession, and of course we observe the changes and the international debate that is taking place.

‘I think it is absolutely reasonable for this House to have a conversation and a discussion on what is an important topic.

‘And I think it is right that we locate this question within a broader discussion of how we care for people at the end of their lives which has become sadly – due to the coronavirus pandemic – a central issue of public debate in this country.’

He continued: ‘As this is a matter of conscience, the Government does not take a position. It is instead a matter for each and every MP to speak on and vote according to their sincerely held beliefs and it is for the will of this House to decide whether the law should change.’

Labour MP Karin Smyth (Bristol South) said it is time to recognise that the current UK law on assisted dying is ‘not compassionate’ and is ‘not safe’.

She told the Commons: ‘I appreciate that this is a sensitive and difficult issue.

‘But is it not time that we do recognise the law is not compassionate, it is not safe currently and it is leaving behind bereaved families and members of the public due to an absence of a safeguarded choice at the end of life?’

Mr Hancock responded: ‘(Ms Smyth) draws attention to a distinction between those who are in a position of being in a terrible illness and the broader issue of suicide. I think that distinction is an important part of this debate and I respect her sincerely held views.’