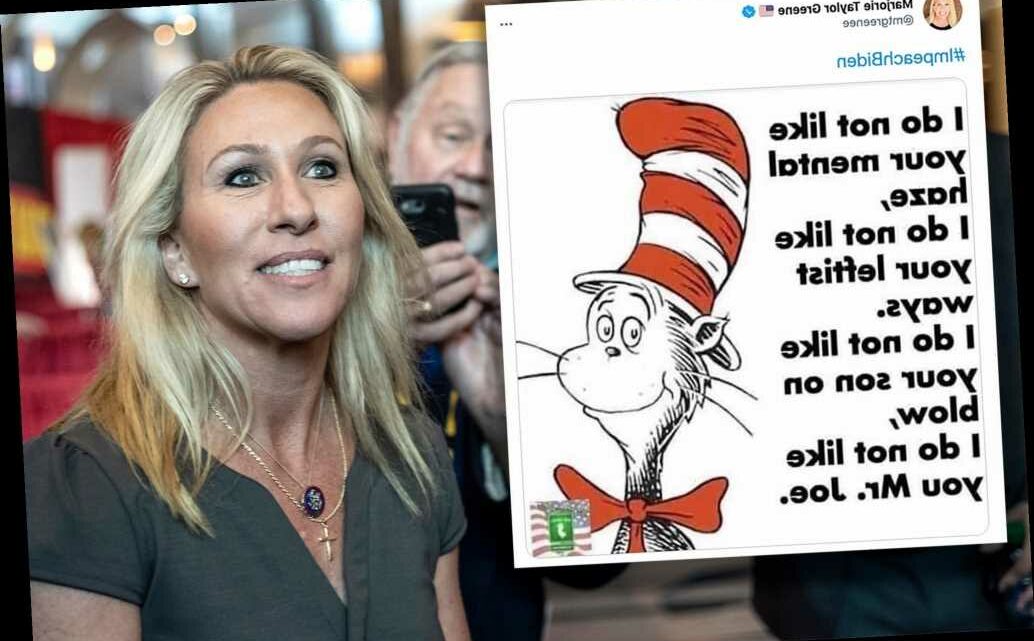 Lightning-rod Georgia Rep. Marjorie Taylor Greene tweeted a rhyme in the style of Dr. Seuss on Thursday calling for the impeachment of President Biden.

The freshman Republican — stripped of her House of Representatives committee duties last month for her support of conspiracy theories, including QAnon and the existence of a Jewish-controlled space laser used to spark wildfires — invoked a Seussian verse in the week when six of the beloved author’s children’s books were yanked from publication over allegedly racist illustrations.

“I do not like your mental haze, I do not like your leftist ways,” began the verse — accompanied by an image of Seuss’ Cat in the Hat — referencing what conservative figures have described as the 78-year-old president’s declining cognitive acuity.

The tweet, which as of Thursday afternoon had racked up more than 2,000 retweets and 7,000 likes, was simply captioned, “#ImpeachBiden.”

Republican lawmakers have taken up the defense of Seuss’ books as a cause celebre, citing their removal from production as another sign of an encroaching “cancel culture.”

The New York Public Library told The Post on Wednesday that it will keep existing copies of the six books — “If I Ran the Zoo,” “And to Think That I Saw It on Mulberry Street,” “McElligot’s Pool,” “On Beyond Zebra!,” “Scrambled Eggs Super!” and “The Cat’s Quizzer” — on its shelves so long as their condition is fit for circulation.