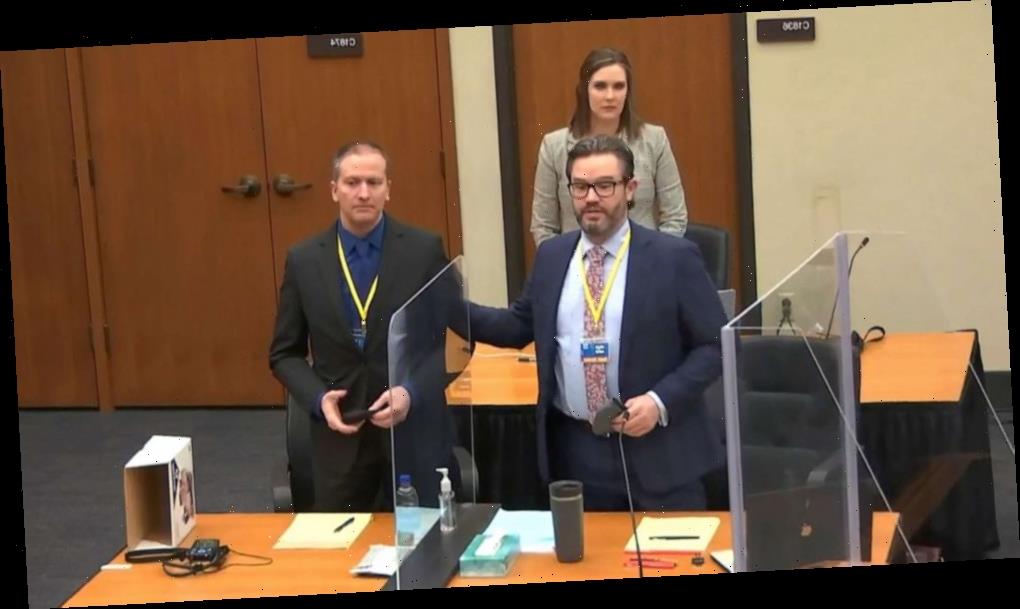 Many of Derek Chauvin's law enforcement colleagues disagree with how he restrained George Floyd. Here's how they have testified.

Several current and former members of law enforcement have testified in the trial of Chauvin, who faces charges of manslaughter, second-degree murder and third-degree murder in Floyd’s death.

Here’s what they’ve said so far:

Chauvin’s supervisor: Knees can be used as a restraint only until a subject is handcuffed and under control

Sgt. David Pleoger, now retired, had been Chauvin’s supervisor since 2008 and was working as his supervisor on the night of May 25, the day Floyd died.

Pleoger was first notified of the incident from 911 dispatcher Jena Scurry, who testified on Day 1 of the trial that she called him after sensing that something was wrong while watching the incident unfold on a fixed police camera.

After Pleoger spoke to Scurry, he called Chauvin on his cell phone.

“I was going to call you and have you come out to our scene here,” Chauvin is heard saying to Pleoger in footage from his body camera played in court. “We just had to hold the guy down. He was going crazy … wouldn’t go in the back of the squad.”

Chauvin then turned his body camera off, which Pleoger testified is allowed by department policy at that point because it was a private conversation.

When Pleoger arrived on the scene, he is seen in his own body camera footage telling Chauvin to gather the witnesses, to which Chauvin replied that would try but that the witnesses were “hostile.”

Pleoger testified that he, Chauvin and former officer Tou Thao, the officer on the scene who monitored the bystanders, went to the hospital.

It wasn’t until the former officers were notified that Floyd had died that Pleoger began asking Chauvin more questions and learned that he had restrained Floyd by kneeling on his neck. Chauvin did not say how long he kept Floyd in that position, Pleoger said.

Pleoger said that department policy did allow officers to use a knee to restrain a subject but only until that subject is handcuffed and under control.

“When Mr. Floyd was no longer offering up any resistance from the officers, they could have ended the restraint,” Pleoger said.

Department homicide unit chief: Subjects need to get off their chest ‘as soon as possible’

Lt. Richard Zimmerman, head of the homicide department for the Minneapolis Police Department, testified that he has the most seniority of any officer in the department.

When Minnesota Assistant Attorney General Matthew Frank asked Zimmerman whether he had been trained to kneel on the neck of someone who is handcuffed, Zimmerman responded, “No. If your knee is on a person’s neck, that can kill them.”

Zimmerman added, “Once a person is cuffed, the threat level goes down all the way. They’re cuffed. How can they really hurt you?”

Frank also asked Zimmerman what Minnesota Police officers are trained to do when they have someone in the prone position, when they are lying on their stomachs.

“Once you handcuff someone, you need to get them out of the prone position as soon as possible because it restricts their breathing,” Zimmerman answered. “You need them off their chest.”

Zimmerman was among a group of 14 Minneapolis Police officers who signed an open letter to the community in June condemning Chauvin’s actions.

Minneapolis Police Chief Medaria Arradondo testified that it was close to midnight on May 25 when one of his deputy chiefs alerted him that Floyd had died.

Prosecutor Steve Schleicher pressed Arradondo on whether Chauvin’s actions followed department policies. Arradondo replied that applying “that level of force” administered to a person in the prone position and handcuffed behind their back is “in no way, shape or form” part of department policy.

Minneapolis Police Department Inspector Katie Blackwell, who was in charge of training at the time of Floyd’s death, testified that she’s known Chauvin for 20 years and even selected him to be a field training officer at one point.

When Schleicher showed Blackwell a still from a video taking by witness Darnella Frazier in which Chauvin is seen kneeling on Floyd’s neck, he asked whether it was a training technique taught by the department when she was overseeing that unit.

“It is not,” Blackwell responded.

When Schleicher asked, “Why not,” Blackwell noted that it was an “improvised position.”

“I don’t know what kind of improvised position that is,” she said. “It’s not what we train.”

Minneapolis Police Department Sgt. Ker Yang, a 24-year veteran of the department who currently serves as its crisis intervention training coordinator, testified that Chauvin participated in a 40-hour crisis intervention course in 2016 in which officers are given opportunities to recognize a person who may be in crisis and how to deal with them.

The department’s critical decision-making model includes applications for use of force and crisis training, Yang said.

Yang explained that a “crisis” could be a situation “that is beyond a person’s coping mechanism, and beyond that, what is beyond their control.”

“Sometimes they don’t know what to do,” Yang said. “And we train them to assist a person to bring them back down to their pre-crisis level.”

Yang stated that it’s important for officers to reassess whether circumstances change during a situation, adding that if the person in crisis is in need of medical attention, it should “be the immediate goal” for officers to help provide it.

During training, it’s common “to slow things down and re-eval and reassess” going through the model, Yang said.

“I provide this training because I believe it does — it works,” Yang said.

When a defense attorney emphasized that a crisis includes people other than the suspect, including bystanders who could also present a threat, Yang agreed that the risk to the officer is greater as the intensity of the crisis grows.

Yang also said this could mean that there are multiple crises happening simultaneously, as well as the fact that a crisis that may “look bad” to a bystander may still be a lawful necessity.

Use-of-force instructor: A knee to the neck is not a trained restraint

Mercil testified that when trying to control a subject, officers are trained to apply the concept of “proportionality,” which is to “use the lowest level of force possible to meet those objectives” in order to keep all parties safe.

Officers are trained to de-escalate situations as the level of resistance decreases and are trained to know that some parts of the body are more prone to injury, such as the neck and the head, Mercil said.

Minneapolis Police Department policy includes two types of neck restraints, which are done by “slowing the blood flow to and from the brain, with the intent to gain control of the subject,” Mercil said.

When prosecutors showed Mercil a photo of Chauvin with his knee on Floyd’s neck, Mercil stated that the technique shown is not and has never been an authorized restraint technique taught by the Minneapolis Police Department.

Mercil added that while the technique Chauvin used is not technically an unauthorized use of force under the department’s policy, he believes the technique wouldn’t be authorized because Floyd was under control and handcuffed.

When questioned by the defense, Mercil said that while department training does teach the use of body weight to control a subject, they also “tell officers to stay away from the neck when possible, and if you’re going to use body weight to pin, to put it on their shoulder and be mindful of position.”

When shown images of different angles of Floyd’s arrest, Mercil stated that the image did not appear to show a neck restraint but rather a prone hold that an officer may apply with his knee. Mercil also agreed that the still images at one point appear to show Chauvin’s shin to be across Floyd’s shoulder blade.

Mercil later said that he did not believe it would be appropriate to hold a subject in that prone restraint position for an extended period, especially after the subject stopped resisting or didn’t have a pulse.

Mercil joined the department in 1996 as a cadet. He is currently on medical leave.

Nicole Mackenzie is the department’s medical support officer and worked as an EMT before joining the police force, and she’s involved with the medical training officers receive. She testified that officers are trained to begin CPR immediately if there is no pulse detected on a subject.

When Schleicher asked about a phrase officers are heard telling Floyd in the video — “If you can talk, you can breathe,” — Mackenzie replied: “That would be incomplete to say. Someone can be in respiratory distress and still able to vocalize it.”

Mackenzie added, “Just because they can talk doesn’t mean they can breathe adequately.”

Stiger said officers initially were justified in using force against Floyd, when he was resisting getting in the back of the squad car, but “once he was placed in the prone position on the ground, he slowly ceased his resistance. At that point, the officers should have slowed down or stopped their force.”

Stiger is expected to continue his testimony Wednesday morning.

Donald Trump is facing legal jeopardy on multiple fronts. Here are the lawyers in his corner.
Technology