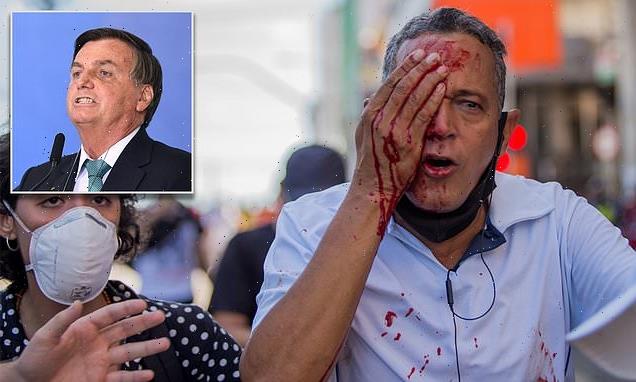 A Brazilian taxi driver has had his left eye surgically removed after being struck by a rubber bullet while watching a protest over President Jair Bolsonaro’s handling of COVID-19.

Daniel Campelo was in the downtown area of the Pernambuco city of Recife on Saturday afternoon when he was hit by the projectile.

The 51-year-old Campelo had an operation Altino Ventura Foundation clinic on Monday, but remained hospitalized at Hospital Restauraçao.

‘My eye has been removed. I have no vision,’ Campelo said, according to Brazilian online news portal G1. ‘In the situation we are in, we have to thank God, but I do not wish (bad) for anyone.’

Organized by leftist political parties, unions and student associations, Saturday’s protests in the capital Brasilia and in Rio de Janeiro were peaceful, unlike in Recife.

Demonstrators carried signs that read, ‘Out with Bolsonaro’ and ‘Impeachment now.’ 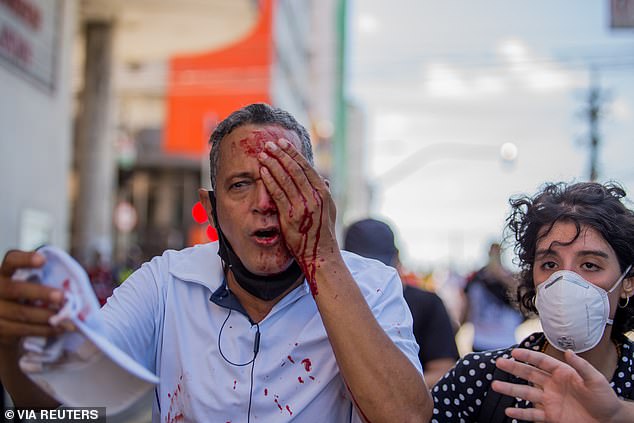 Daniel Campelo, who is employed as taxi driver, was in the downtown area of the Pernambuco city of Recife on Saturday afternoon when he was hit by a rubber bullet that was fired by a military police officer who was dispersing demonstrators who gather to protest Brazilian President Jair Bolsonaro’s handling of the COVID-19 pandemic 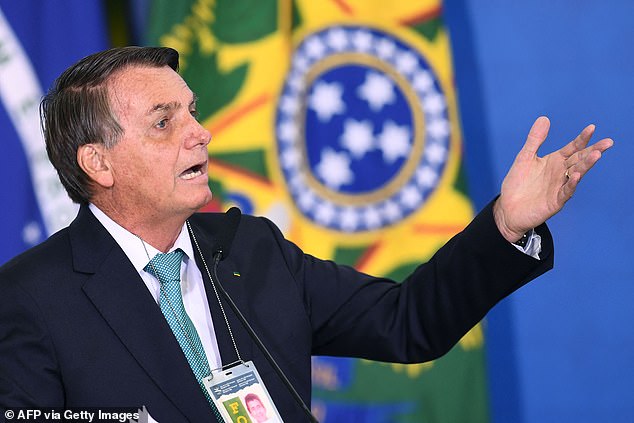 President Jair Bolsonaro’s popularity has plummeted during the coronavirus crisis, which has killed more 462,791 Brazilians as the far-right leader played down its severity, dismissed mask wearing and cast doubt on the importance of vaccines 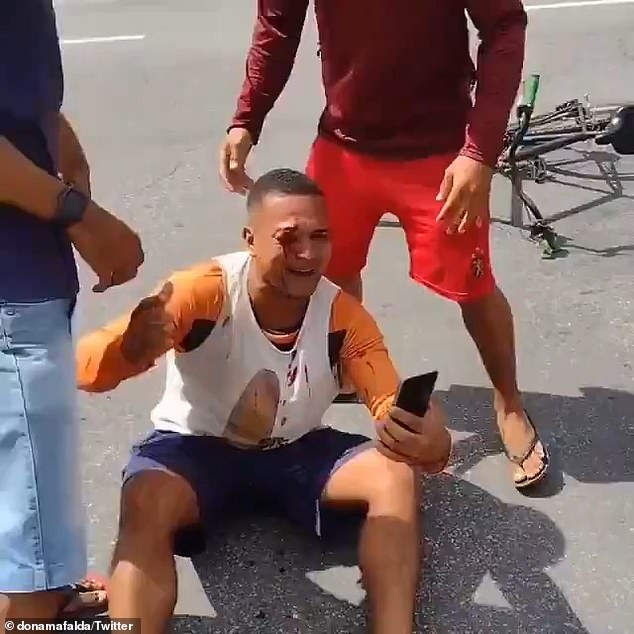 Jonas Correia, 29, was on his way back home when he suddenly got caught in the middle of the protest. The married father was also struck by a rubber bullet, causing him to lose sight in his right eye

Bolsonaro’s popularity has plummeted during the coronavirus crisis, which has killed more than 450,000 Brazilians as the far-right leader played down its severity, dismissed mask wearing and cast doubt on the importance of vaccines.

Most protesters wore masks and tried to observe social distancing protocols, not always successfully, as they called for faster vaccinations countrywide.

Jonas Correia, 29, was also blinded in one eye in after he suddenly got caught in the middle of the same protest in Recife while traveling home. 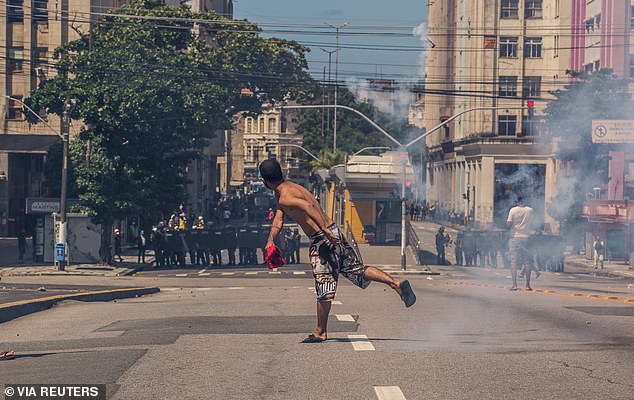 Demonstrators react amid tear gas against riot policemen during an anti-President Jair Bolsonaro protest in Recife, Brazil, on Saturday 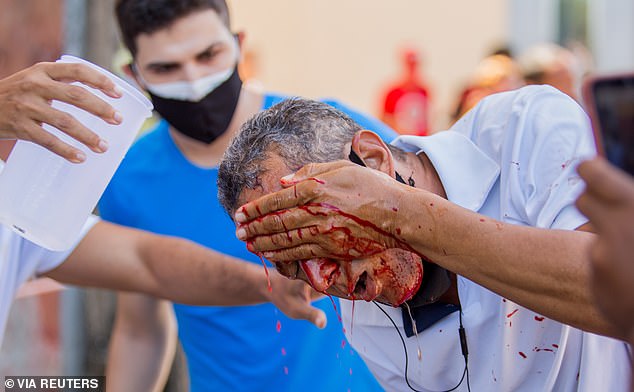 Daniel Campelo is aided by bystanders after he got hit on the left eye by a rubber bullet. He had surgery Monday to remove the eye 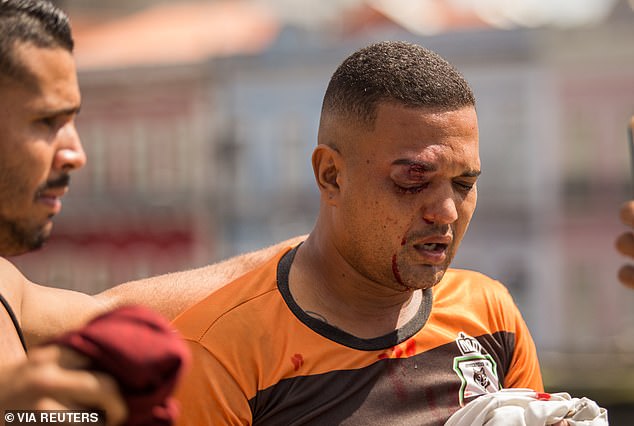 Jonas Correia receives help from others after sustaining injury as riot police and anti-Bolsonaro protesters clash in Recife, Brazil

Correia was shot in the right eye had to be rushed to the Altino Ventura Foundation clinic’s urgent care wing before he was transferred to Hospital Restauraçao.

He learned Monday that he had lost sight in his right eye, and was awaiting for swelling to go down and is scheduled to meet with doctors at the clinic Wednesday.

Surgeons say they have no plan to remove his injured eye, and it is unclear if it will remain permanently blind.

‘Only God knows what I went through and I am going through,’ Correia told G1 on Tuesday. ‘Today I woke up very sad, anguished, because I am a young man, healthy, independent, I like to work. I am very family (oriented), I think a lot about my children, and what is going to be of me now?

‘My children and my wife, who need me. I don’t even know what to say, it’s just the desperation of a father who goes after the family’s livelihood. I’ve cried a lot,’ added Correia, who said government officials have yet to contact him.

His wife Daniela Barreto met the Pernambuco Secretary of Justice and Human Rights to determine his legal steps. 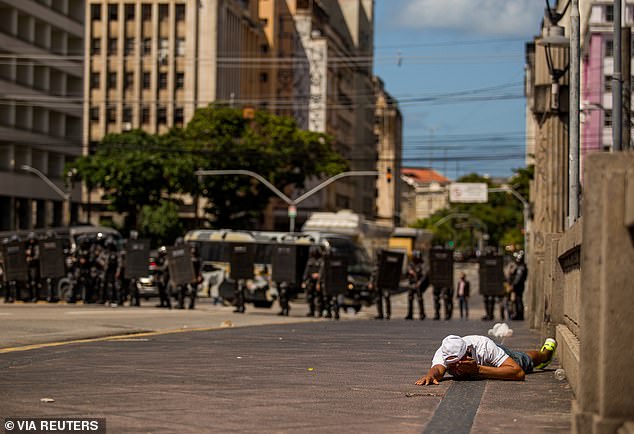 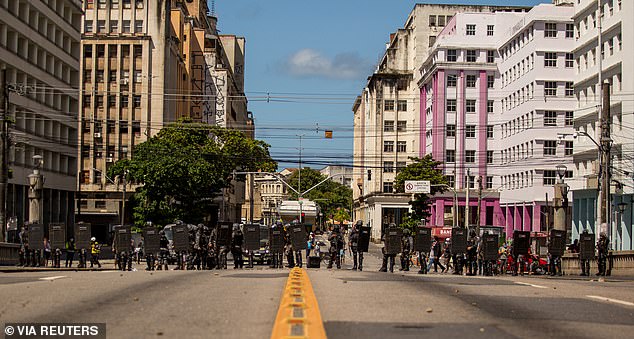 Riot policemen stand with their shields at a demonstration in Recife, Brazil, as protesters took to the streets to call out President Jair Bolsonaro’s handling of the COVID-19 pandemic

The Altino Ventura Foundation released a statement indicating that while no surgery is required at the moment, it ‘may change based on the evolution of the patient and the results of the new exams.’

Pernambuco governor Paula Câmara on Saturday suspended the Recife Military Police commander and four police officers after it was reported that councilwoman Liana Cirne, who took part in the protest, was hit with pepper spray.

Video recorded by a protester showed Cirne approaching a police cruiser to talk to an officer and identify herself before one of the agents inside the vehicle sprayed her.