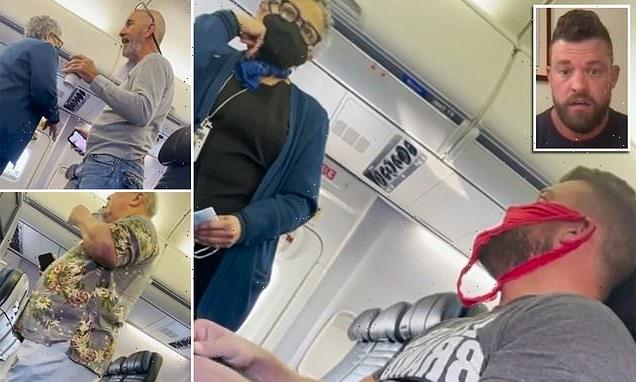 A Florida man wearing red women’s underwear as a face mask was kicked off an airplane prior to takeoff – followed by other passengers who also got off in support.

Video footage of the Wednesday morning incident shows staff on United Airlines confronting Adam Jenne, who had underwear covering his nose and mouth, as he waited onboard for his flight from Fort Lauderdale to Washington to take off.

‘You’re going to have to come off the airplane. We’re not going to let you travel,’ said a flight attendant in a cell phone video recorded by a passenger.

‘Why?’ responded Jenne in the video, which was obtained by Fox4.

‘You’re not in mask compliance,’ said the attendant in the video.

Jenne, 38, of Cape Coral, Florida, told the outlet that the underwear was within TSA guidelines – a federal law until at least May – despite the fact that he doesn’t agree with the rule requiring passengers to wear masks on planes.

SCROLL DOWN FOR VIDEO 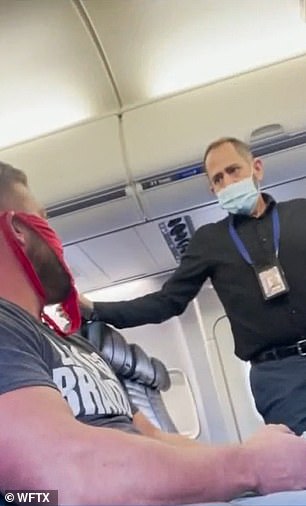 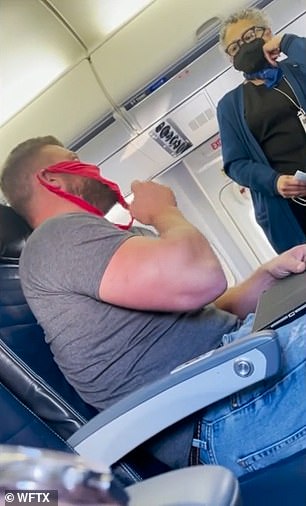 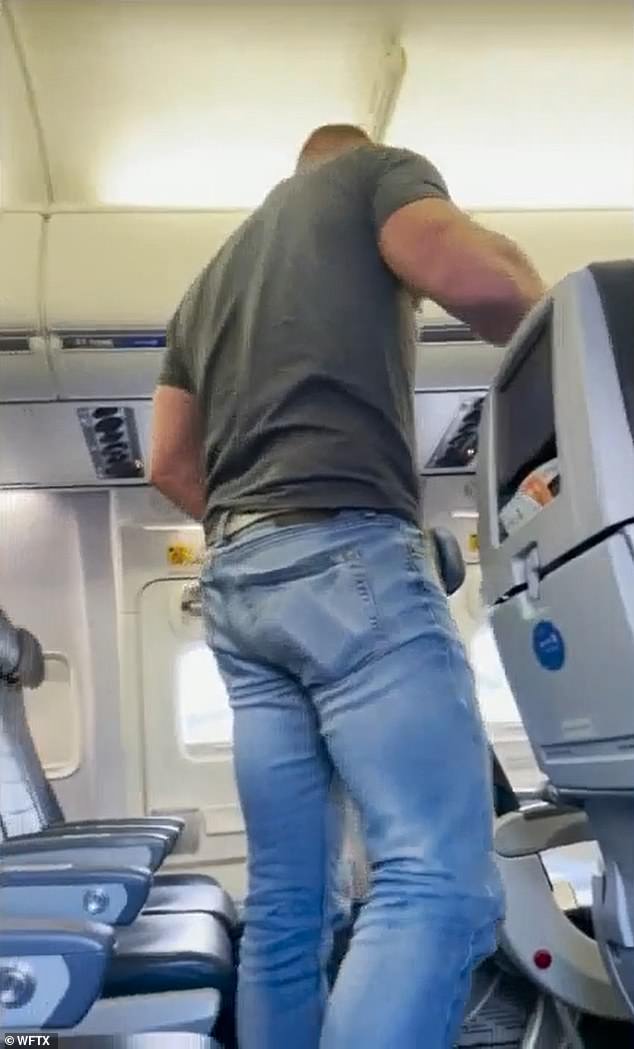 Pictured: Jenne exiting his seat after being kicked off of a United Airlines flight for not complying with the face mask rule, despite wearing underwear on his face, on Wednesday 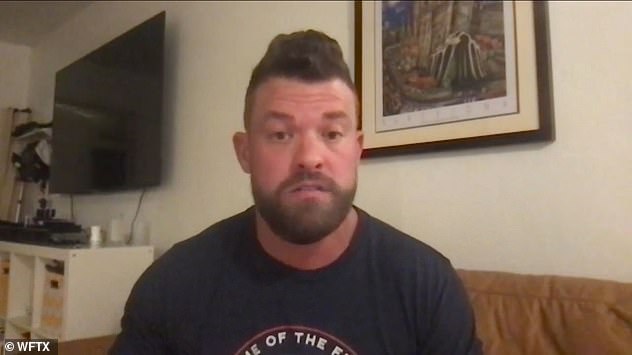 He added that wearing the underwear as a face mask was intended to show the absurdity of masking on a plane until it reaches cruising altitude, when passengers are then allowed to remove their masks to eat and drink.

‘There’s nothing more absurd than having to wear a mask until I get to cruising altitude so that I can order Tito’s by the double and snack on pretzels, and illustrating that absurdity by wearing women’s underwear on my face sounds perfect,’ said Jenne.

Moments after Jenne was kicked off, the video shows several other passengers also exiting, in a show of support.

‘Did he just get kicked off for wearing a mask’ said one man in the video.

Jenne expressed gratitude to fellow passengers for leaving the plane in protest.

‘Thank you to them, because they saw something, an injustice, something that didn’t make sense, and they stood up,’ Jenne told Fox4.

United Airlines remained steadfast that Jenne and his underwear mask were not in compliance.

‘The customer clearly wasn’t in compliance with the federal mask mandate and we appreciate that our team addressed the issue on the ground prior to takeoff, avoiding any potential disruptions in the air,’ it said in a statement.

Shortly after the incident, Jenne said he received an email from United Airlines saying he is now banned from the airline as his case is reviewed by its Passenger Incident Review Committee.

Meanwhile, Jenne said he made the right decision to protest the  industry’s mask rules.

‘Your rights end where mine begin. You don’t get to tell me how I conduct myself,’ Jenne added.

According to United’s website, masks should fully cover the mouth and nose, and not have openings or vents, but Jenne said his underwear mask followed those guidelines.

However, he did reveal that this isn’t the first flight he’s been kicked off of for disobeying airline’s mask mandates. He said he was asked to leave a Delta Airlines flight also for wearing underwear as a face mask. 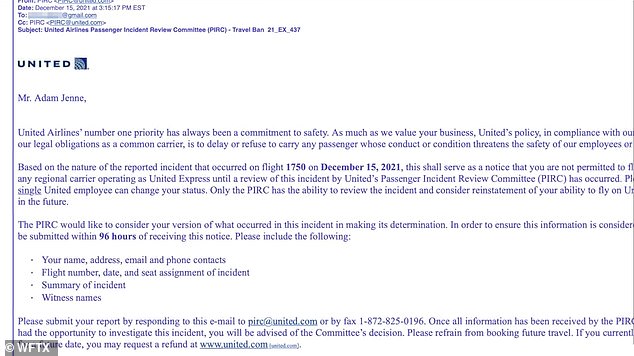 Jenne said he received an email from United Airlines, pictured, saying he is now banned from the airline as his case is reviewed by the Passenger Incident Review Committee 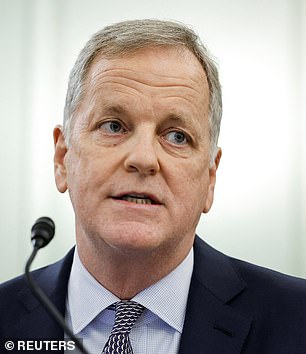 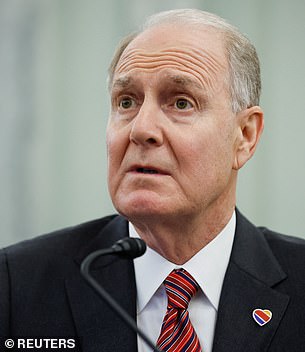 On Wednesday, the CEOs of two of America’s biggest airlines said they do not think masks should be required on planes any longer – even as new cases of the Omicron variant spread across the nation.

At a Senate hearing about the financial support airlines received in 2020 and 2021, Sen. Roger Wicker, the ranking Republican on the Senate committee, asked American Airlines CEO Doug Parker and Southwest CEO Gary Kelly their thoughts on the federal government’s mask mandate for flying.

‘I think the case is very strong that masks don’t add very much, if anything, in the air cabin environment,’ Kelly said. ‘It is very safe and very high quality compared to any other indoor setting.’

Both he and Parker pointed out that airlines improved airflow on board their planes in the wake of the pandemic, noting that high-grade HEPA air filters on planes capture almost all airborne contamination and the cabin air is often exchanged with fresh air from outside.

‘I concur,’ said Parker, according to CNN. ‘An aircraft is the safest place you can be.

‘It’s true of all of our aircrafts – they all have the same HEPA filters and airflow.’

The Transportation Safety Administration first announced its mask mandate for all travelers last year, and extended it in April, with an expiration date of September 13, before extending it again in August through March 2022.