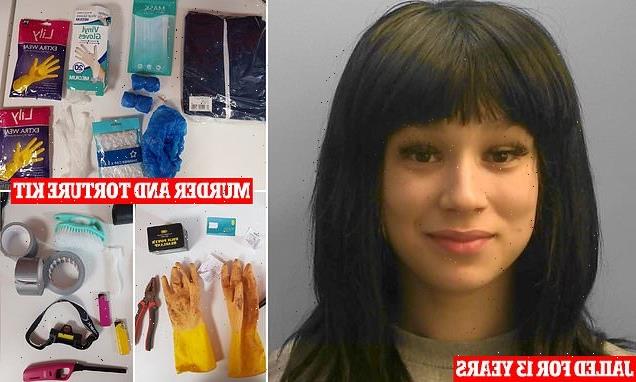 Lifeguard, 18, who prepared 'murder and torture kit' for lover jailed

Female lifeguard, 18, who meticulously put together ‘murder and torture kit’ including 11 bottles of bleach, forensic body suit and a Stanley knife, and wrote ‘to-do list’ for killing a fling because he’d slept with other women is jailed for 13 years 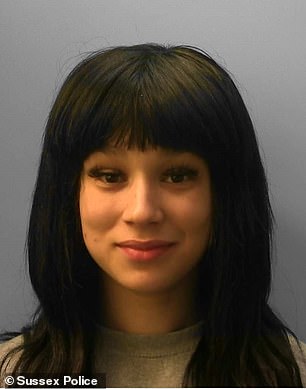 Sophie George (pictured), 20, filled bags with bleach, duct tape, forensic clothing, bin liners and lighter fuel before arranging to meet Adam Yiosese near her Brighton home in October 2019. She has been jailed for 13 and a half years.

A teenager who meticulously planned to torture and kill a casual fling for sleeping with other women has been jailed for 13 and a half years for attempted murder.

Sophie George was ‘consumed with revenge’ when she filled bags with bleach, duct tape, forensic clothing, bin liners and lighter fuel before arranging to meet Adam Yiosese near her Brighton home in October 2019.

The ‘fixated’ 18-year-old, now 20, tried to get him to drive towards Wild Park before pulling a large serrated knife on him and slashing his hand as he defended himself.

He managed to get out of the van and called 999 before George punched him and bit his finger to the bone.

When police later searched George’s house, they found ‘chilling’ written plans of how to kidnap and murder him – as well as how to change her identity and start a new life.

These included plans to force him to walk to a grave she had dug and torture him to reveal the names of other women he had slept with – and an application to change her name and apply for a new passport.

Today, a judge told her she posed a danger to anyone else she might meet before sending her to prison.

Sitting at Hove Crown Court, Judge Christine Henson told her: ‘It seems from all I have read in this case, that you were fixated and consumed by revenge as you considered the victim had been seeing other women.

‘You went to meticulous lengths to plan your attack. This was a highly planned attack. It is clear you knew what you were doing was wrong and your planning included evading responsibility and detection.’ 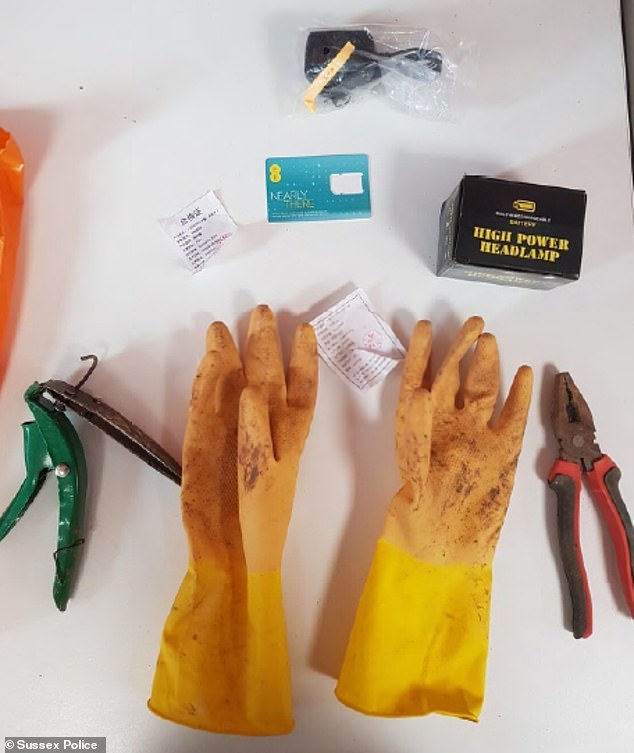 Rubber gloves, pliers and a phone sim card were among the items found in George’s ‘murder kit’ following her arrest 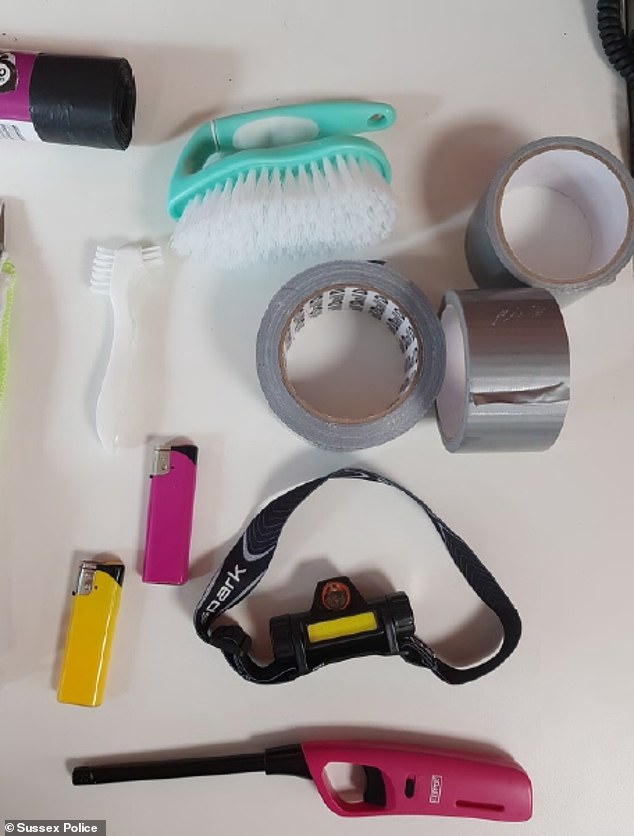 Lighters, brushers and duct tape, recovered from the ‘torture and murder kit’ of George

She added: ‘The author of the pre sentence report considers you to be a very high risk to intimate partners if you feel jealous or insecure.

‘Although it is an isolated incident it is deeply concerning and your ability to conceal it from those around you makes it all the more troubling.

‘A casual relationship is a relatively common occurrence in the lives of many.

‘The extreme nature of your response to this was completely abnormal.

‘It is clear you pose a risk to those you believe has let you down.

‘This was not a sudden and spontaneous reaction but one you thought about and planned for weeks before attempting to carry it out.

‘It was meticulous in its preparation including forensic and technological awareness and your response to not being the ‘only partner’ is so beyond any ordinary comprehension that I am quite satisfied that you do present a significant risk.

Sophie George, 20, has been jailed for 13 and a half years for planning to torture and murder her casual lover because he was sleeping with other women.

She was 18 at the time of the of her offence.

The ‘full murder kit’ discovered in her bags included:

‘Your notes about torture to reveal the whereabouts of other women is an extreme reaction to a regular occurrence of a casual partner seeing others.’

The court heard Mr Yiosese has been left with flashbacks and difficulty trusting friends, because he had trusted George and then discovered she had been planning to kill him.

As she was sentenced George, who wore two Dutch braids, a grey headband, a white t-shirt and a black cardigan, sobbed and dried her eyes with tissues.

Prosecuting, Jennifer Gray said George and Mr Yiosese had met when she was 17 at Moulsecoomb Station, when he was studying at the University of Brighton.

By the time of the attack, he had graduated with a first class degree and was working as a railway engineer in London.

They had exchanged messages that summer, but she had put him off coming to Brighton for a couple of months – it later became clear this was because she was busy planning to kill him.

She eventually suggested meeting on October 9 at 11.15pm, after he had finished work. She told him to pick her up in Selsfield Road, near her home in Highbrook Close – although he did not know that.

He was confused when she became angry he had brought his work van rather than his car. Police later discovered she had been researching how to lock the doors from the inside in the model of car he usually drove.

She got him to drive to what she said was a friend’s house, where she picked up two carrier bags filled with her ‘murder and torture kit’.

She then told him she wanted to go to a park, and got him to drive in the direction of Wild Park – and when he said he wanted to go and get food instead, she twice grabbed the steering wheel to get him to change direction.

When they were back by Selsfield Drive, she then pulled a knife on him, and tried to stab him. He cut his hand deflecting the blow, and fled the van.

A woman in flats overlooking the road saw George attacking him, and called 999, taking pains to tell them it was the woman she saw attacking the man, not the other way round.

When police arrived, he had injuries to his face where she had punched him, and she had bitten his finger to the bone.

Ms Gray said: ‘The victim was very compliant and obviously relieved the police had arrived.

‘When the police began unravelling what happened, they removed the handcuffs from the victim, and arrested the defendant.

‘The officer then started to examine the contents of the bags and the whole scene became very much more serious.’ 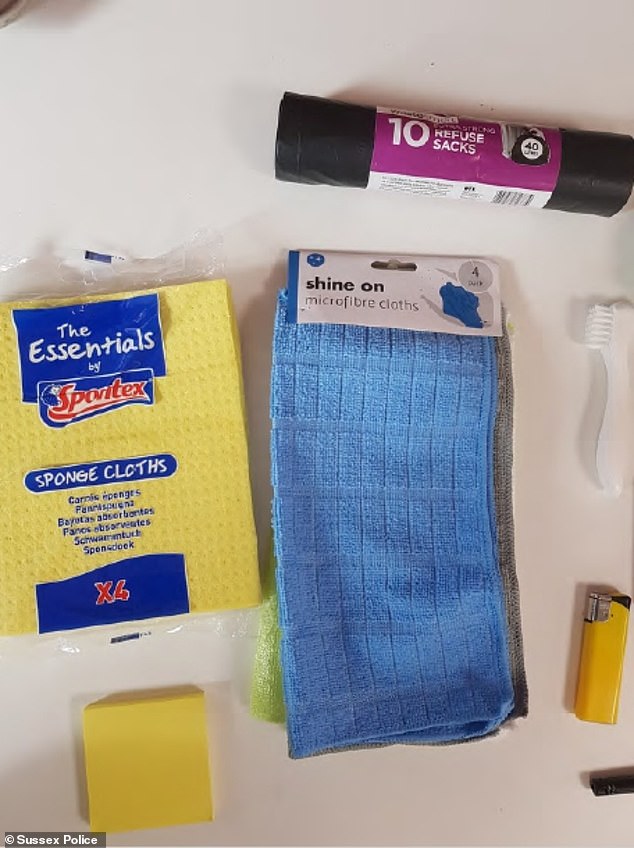 A woman in flats overlooking the road saw George attacking her lover and called 999, taking pains to tell them it was the woman she saw attacking the man, not the other way round. (Pictured: Post-it notes and cloths recovered from George’s bags) 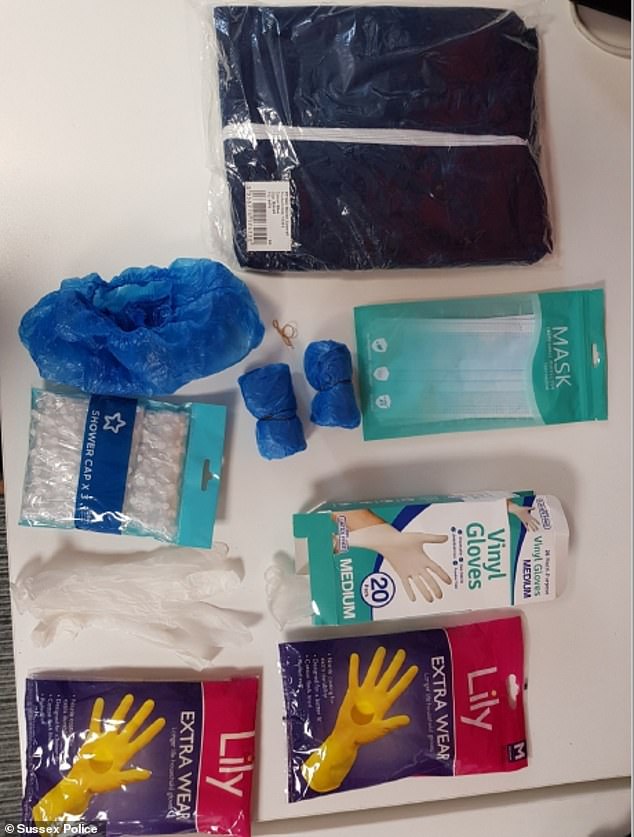 Shoe covers – the sort worn by police when attending a crime scene -, face masks and vinyl gloves were also discovered in George’s bags

At her home, they discovered a plan to kidnap and torture Mr Yiosese, including how to turn off her phone and delete messages and contacts to avoid detection.

Fifteen minutes before today’s hearing was due to start, the judge was handed a handwritten letter from George in which she expressed remorse for her actions.

Defending, Graeme Wilson said that there had been an ‘imbalance’ in their relationship, pointing to her youth and what he said was social isolation and a difficult home life.

He said: ‘There’s a human element and an individual who has feelings and emotions and in sentencing this individual it’s not a simple question of categorisation and ticking boxes which is how some people may think sentencing happens with the guidelines today.

‘When they first met, she was 17 and when the offence happened, she was 18. She was due to stand trial when 19 and stands before you now aged 20.

‘She’s not mature, she’s frightened. Frightened at the time, frightened of what she did and that’s expressed in the letter that Your Honour has before you today.

‘She’s frightened that she’s capable of doing what she did at that particular time.’

George initially denied two charges of attempted murder and one of possessing an offensive weapon.

She pleaded guilty in May last year, just before the jury was due to be sworn in, after two days of legal argument.

The court heard that sentencing was significantly delayed because she had refused to engage with professionals so a psychiatric report could be produced, even after Judge Henson ordered that she be sent to hospital to be assessed.

The psychiatrist could only say that she did not appear to have any mental health problems, learning difficulties or autism.

She was sentenced to 13 and a half years in prison, of which she must serve at least two years in custody, with a four-year extended licence.

A forfeiture and destruction order was made for the knife.