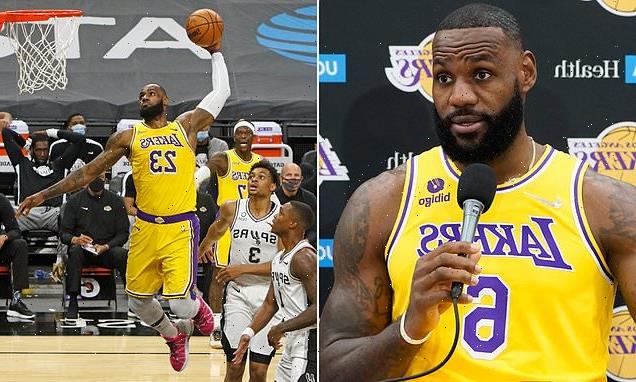 LeBron James confirms he HAS had the COVID-19 vaccine after previously dodging questions about whether he’d take it: Lakers legend admitted he was ‘very skeptical’ but said he came around after ‘doing my research’

Lebron James says he’s been vaccinated against COVID-19 after doing his ‘research,’ ending a long-running mystery about whether or not the superstar player has been jabbed.

James confirmed he’d had the shot during a Los Angeles Lakers’ pre-season press conference on Tuesday.

‘I know that I was very skeptical about it all, but after doing my research and things of that nature, I felt like it was best suited for not only me, but for my family and my friends,’ the 36-year-old said.

He stopped short of endorsing the shots, calling them a matter of ‘choice’ and saying it’s ‘not [his] job’ to promote them.

‘We’re not talking about something that’s political or racism or police brutality or things of that nature. We’re talking about people’s bodies and well-being, so I don’t think that I should get involved in what other people should do for their bodies and their livelihoods.’ 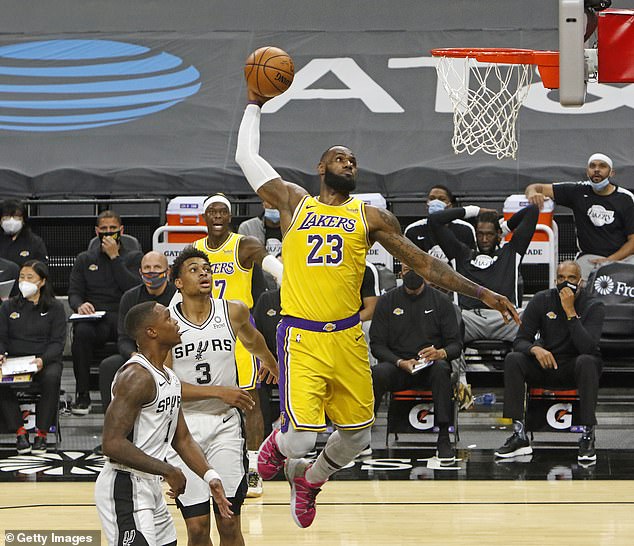 The superstar player, above in December 2020, stopped short of endorsing the vaccines

The National Basketball Association has no widespread vaccine mandate, but it requires shots for teams in New York City and San Francisco, which have mandates in place.

Sixty-four percent of the US population has at least one dose of a COVID-19 vaccine.

As of September 21, the Centers for Disease Control and Prevention reported that race or ethnicity was known for 59 percent of those who got at least one dose.

Among this group, 60 percent are white, 17 percent are Hispanic and only 10 percent are black, according to the Keiser Family Foundation, which noted that ‘recent patterns suggest a narrowing of racial gaps in vaccinations at the national level.’

Black people make up 13.4 percent of the US population.

Asked how important it was for the team to be fully vaccinated, James said: ‘At the end of the day, you’re always trying to figure out ways to always be available and protect one another.’ 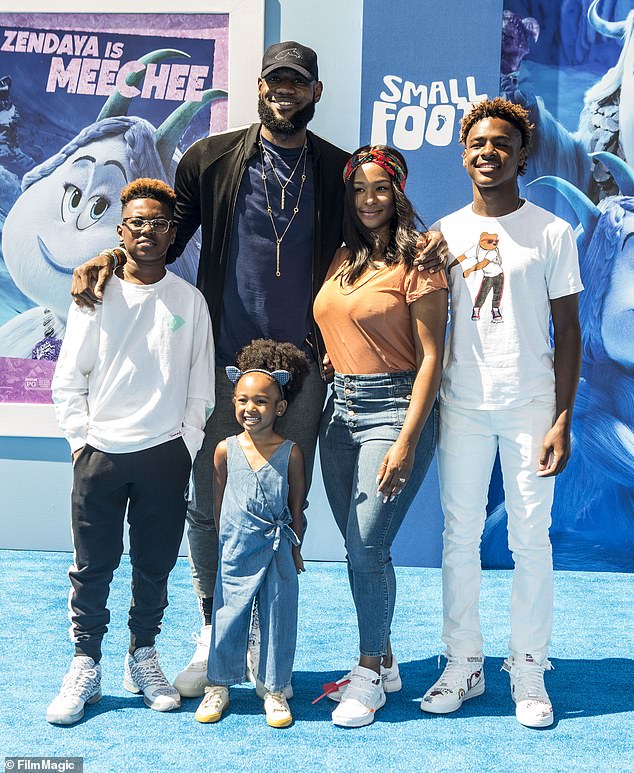 The Laker said getting vaccinated was the right choice ‘for my family and my friends.’ In May, the NBA decided not to suspend him after he attended a promotional event for a tequila brand

James’s assertion on Tuesday ended a long-running mystery about the vaccine status of one of the NBA’s most prolific players.

In March, he had avoided answering about if he was planning to get the coronavirus vaccine, saying in an interview that he’ll ‘keep that a private thing.’

James appeared wishy-washy about the COVID-19 jab as he gave a lengthy interview ahead of the NBA All-Star Game on Sunday, after NBA commissioner Adam Silver recently announced that he would not make the vaccine mandatory.

‘That’s a conversation that my family and I will have and I pretty much I’ll keep that to a private thing,’ James said.

In May, former Lakers guard Dennis Schroder told a German publication that he and James were the only unvaccinated Lakers, according to Yahoo Sports, which says 10 to 15 percent of the league’s players are unvaccinated.

A few weeks later, the NBA decided not to suspend him, or order him to quarantine, after he went to a promotional event for Lobos 1707 Tequila. They said James just ‘briefly’ attended the event, which was outdoors and required proof of vaccination or a negative test.

‘Under current NBA rules, vaccinated players are permitted to engage in outside activities including their individual commercial arrangements, such as sponsor appearances or ad shoots,’ spokesman Mike Bass said in a statement on May 24.

The statement led many to believe that James wasn’t jabbed.

Lakers General Manager Tob Pelinka has said that his team will be fully vaccinated before the season opener against the Golden State Warriors on October 19. 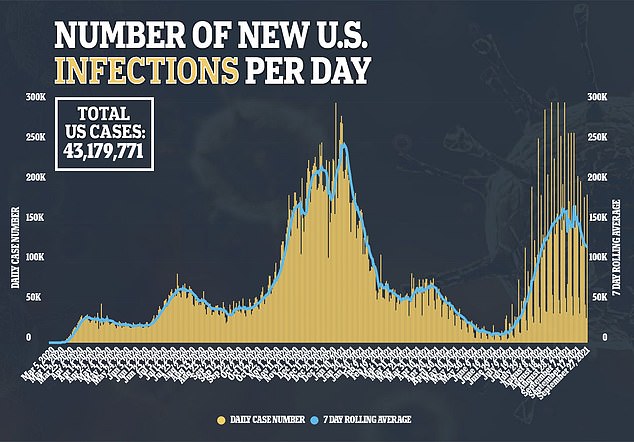 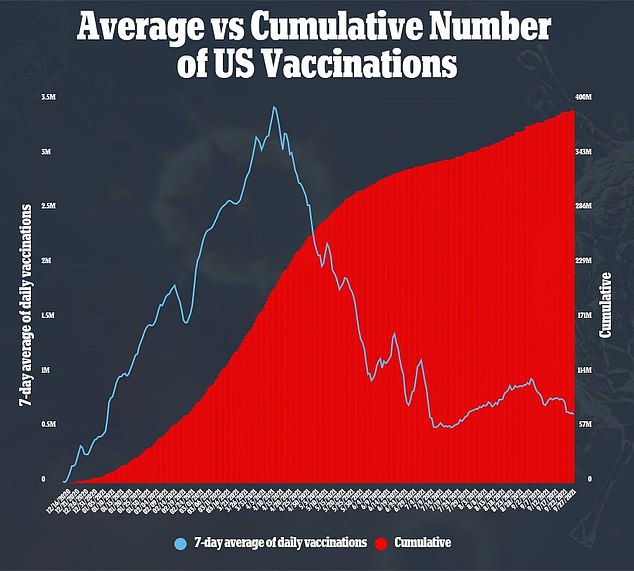 On Saturday, Rolling Stone exposed the NBA’s difficulty in getting players to advocate for vaccines.

The players’ union has rejected the NBA’s proposal for a vaccine mandate, and the league has surprisingly lax vaccination standards, sources said.

‘No player will be forced to undergo off-day testing, league sources confirmed, despite the NBA suggesting it in earlier guidance. Socially-distanced travel is now “suggested.”

‘Players who aren’t fully vaxxed and seek outside labs for regular testing must get league approval, but their tests will otherwise be supervised by their teams – the kind of states-rights amalgam of governance preferred by players. A league source says NBA regulators are prepared to guard against forged vaccine cards by sweeping state databases for proof, but only if elevated to their attention,’ the report said.

Some black activists have cited racism in the medical field as a reason why black people should not get vaccinated.

On Monday, a prominent Black Lives Matter organizer in New York City pledged an ‘uprising’ over ‘racist’ vaccine mandates’ as restaurants, movie theaters and gyms are now required to ask for proof of vaccination for entry.

‘So what is going to stop the Gestapo, I mean the NYPD, from rounding up black people, from snatching them off the train, off the bus? … The vaccination passport is not a free passport to racism,’ Chivona Newsome, a co-founder of Black Lives Matter of Greater New York.

She made the statement outside of Carmine’s, a Manhattan restaurant where three black women were arrested for attacking an Asian hostess after members of their group were refused entry because they did not have proof of vaccination.

James has earned more than $1 billion in his 18-year-career, but taxes, spending and investments put his net worth at about $850 million, according to Forbes.

A British academic has created a 'support group for the unwoke'

15 of the top companies for women working in tech
Technology