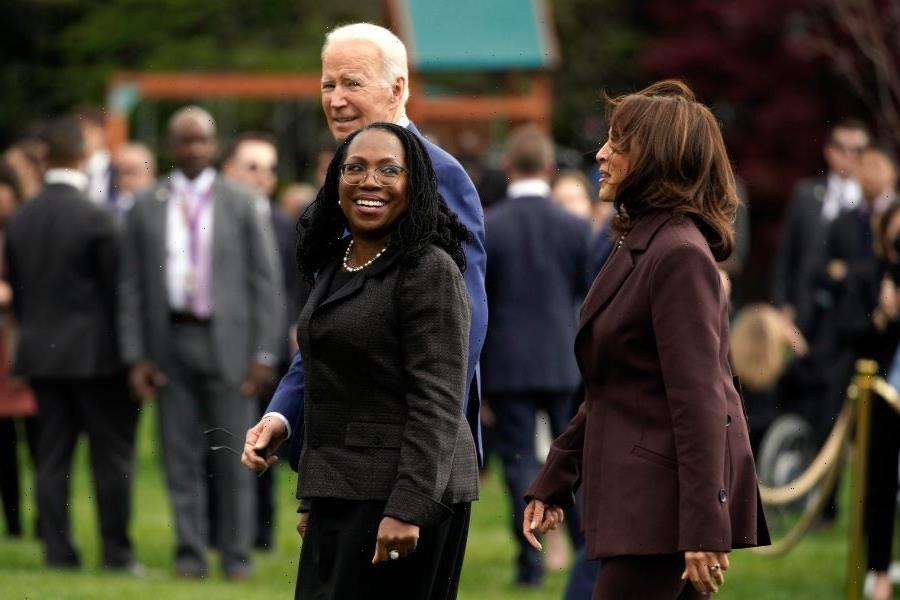 Ketanji Brown Jackson Celebrates Confirmation: “I Am The Dream And The Hope Of The Slave”

On a bright April day at the White House, a Black woman jurist spoke to her own hopes and dreams of ascending to the nation’s highest court. In the process, Ketanji Brown Jackson paid homage to her family, friends and community, and the prayers of countless ancestors who helped build America.

“I am the dream and the hope of the slave,” said Judge Jackson, quoting poet Maya Angelou as she stood at a lectern on the South Lawn. The celebration marked her historic confirmation as the nation’s first Black woman nominated to the Supreme Court.

Noting that it has taken 232 years and more than 100 mostly white male justices before her, Jackson added: “But we’ve made it. We’ve made it. All of us. Here in America anything is possible.”

Jackson, 51, was confirmed Thursday, with bipartisan support by the U.S. Senate following a bruising confirmation hearing.

Friday, however, she beamed while flanked by President Joe Biden and Vice President Kamala Harris, looking out into a packed audience. The rows of white lawn chairs were filled with her proud parents, husband, two daughters, and brother, members of the Biden-Harris Administration cabinet and hundreds more.

The guest list included a who’s who of Washington and national political power circles. Rep. Joyce Beatty, chair of the Congressional Black Caucus, was joined by fellow members. Political gurus Minyon Moore and Donna Brazile and many activists who’ve championed the Judge. Carol Moseley Braun, the trailblazing first Black woman in the Senate, embraced well-wishers. Rev. Jesse Jackson was spotted, along with the Mayors of Baltimore and Chicago. The women leaders ranged from Laphonza Butler, the first Black women president of Emily’s List to Kylie Burke president of Howard University’s student government association, to name a few.

The South Portico and driveway lined with fluttering flags. The Marine band played live music that ranged from patriotic staples to an Al Green classic.

The mood was festive and emotional.

“Think of all the future Ketanji Brown Jacksons who will be inspired,” said attorney Janice Mathis, executive director of the National Council of Negro Women.

The group, along with Higher Heights, Black Women’s Roundtable, She Will Rise, #WinWithBlackWomen, and The Black Women’s Leadership Collective, were among many “sista” leaders who advocated for the historic nomination.

Many Black women in the audience cried tears of joy as Jackson spoke of her grandparents’ humble roots, and of her parents attending racially segregated schools. She thanked former President Barack Obama for nominating her as a judge years ago, and evoked the names of Dr. Martin Luther King Jr., along with the nation’s first Black Supreme Court Justice Thurgood Marshall, and “personal heroine” Judge Constance Baker Motley.

“We have come a long way toward perfecting our union,” she said. “In my family, it took just one generation to go from segregation to the Supreme Court of the United States.”

Indeed, VP Harris noted in her remarks that she wrote to her goddaughter about the meaning of the historic moment. There’s “a deep sense of pride and joy and what it means for our future.”

There was rousing applause for Harris and a standing ovation for President Biden, who praised Jackson’s dignity, character, and poise under pressure. His nomination fulfilled a 2020 campaign promise.

“I could see it as a day of hope, a day of promise, a day of progress, a day when once again the moral arc of the universe—as Barack used to quote all the time—bends a little more toward justice,” Biden said, noting the impact Jackson will have on Black women and girls and others. “I believe so strongly that we needed a court that looks like America.”

After Judge Jackson wrapped her speech, she hugged Biden (who at one point appeared to wipe away a tear) and Vice President Harris.

The three turned and walked back toward the White House. Just before entering, Judge Jackson turned and waved once more to the cheering crowd.

How bad is the crackdown on dissent in Russia?