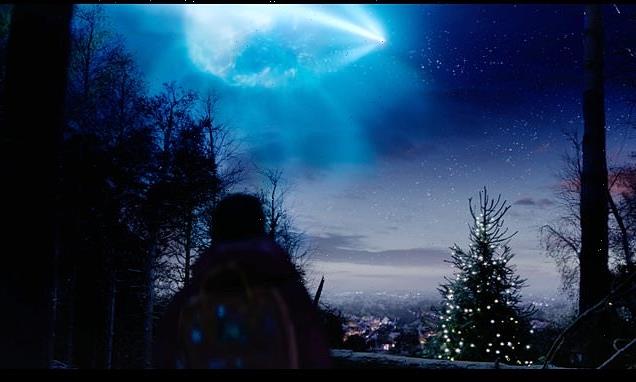 John Lewis has pledged to make a substantial donation to charity after being accused of copying folk duo’s version of the song used in its Christmas advert.

Bosses at the retailer agreed to donate an undisclosed sum after a plagiarism row threatened to undermine its festive ad campaign.

It comes after The Portraits, a husband-and-wife duo from Somerset, won support from a Pink Floyd lawyer.

Musicians Lorraine and Jeremy Millington claimed the version of the 1985 hit Together in Electric Dreams used in this year’s John Lewis campaign – which tells the story of a boy who befriends an alien – is ‘near identical’ to the stripped-back arrangement they released last year for charity.

Both the Portraits’ and John Lewis’s interpretation of Electric Dreams are strikingly different from the fast-paced techno-pop original.

They feature a young female soprano, violins, and a slow, haunting piano and dreamy pace.

The couple said they emailed a John Lewis marketing manager in March suggesting the track could be used for its Christmas advert but did not hear back.

They were then shocked to learn that a version of the song by 20-year-old musician Lola Young featured in the ad.

John Lewis strenuously denies plagiarism but, after a week of talks with the band, it last night announced ‘substantial’ donations to Mind, the mental health charity, and Cruse Bereavement Care, who receive the profits from The Portraits’ version of the song.

‘We share common interests with the Portraits in the love of the song and our commitment to charities,’ a spokesman said.

‘We’re glad to donate to the Portraits’ chosen charities.’

The Portraits received free advice from Andrew Gummer, a barrister who is part of Pink Floyd’s management team. ‘I feel bad about going against John Lewis,’ he said. ‘I love John Lewis and they are very decent people. But they could have done it better.’

The Portraits released their version of the song, which featured vocals from their 14-year-old daughter Ciara, last Christmas to raise money for families affected by Covid-19.

Guy Protheroe, a musicologist and copyright ‘troubleshooter’, provided the band with an audio file which played the two versions of the song simultaneously.

‘All that is required to make them match is to move the John Lewis track up one tone in pitch, a very basic adjustment,’ he said.

John Lewis commissioned its own musicologist who it said was ‘unable to identify any meaningful evidence of copying from The Portraits arrangement’.

The retailer added: ‘Our version of Electric Dreams is an original cover that was properly authorised by our advertising agency, who secured copyright licences from the original publishers of the track on our behalf. A brand like ours would never copy another cover version.’

The Portraits are now planning to re-issue their single, with the B-side featuring their version of Ed Sheeran’s 2014 hit Photograph.

‘What an exceptional outcome it would be for the single to reach Christmas Number One to honour all those we’ve lost in this country,’ the duo said.

The Milligans’ 14 year old daughter Ciara contributed the main vocals, with a soprano voice and rendition so unwavering and pure that Eamonn Holmes of ITV’s This Morning called it ‘very moving, a beautiful version’, and celebrities from Matt Lucas to Steven Fry to Midge Ure tweeted their support for the song and the message behind it. The BBC’s Justine Greene called it ‘soulful and sublime.’

The band offered their song to John Lewis this March. But the high street giant said: ‘The person contacted by email was not involved in this year’s Christmas ad campaign and left the Partnership in the summer of 2021.

The music that accompanies the ad is always the final element to be added and this year was chosen at the end of October. Electric Dreams was one of a number of options on the table and hadn’t been considered prior to October.’