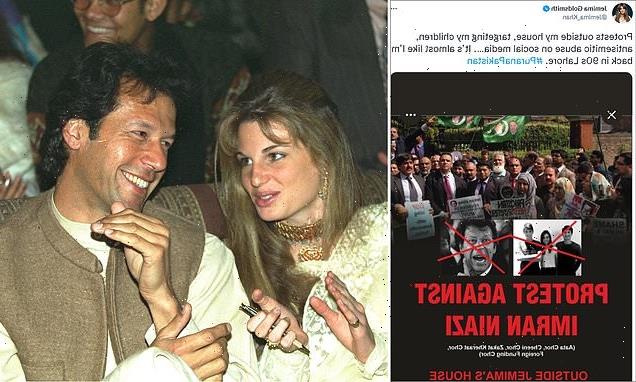 ‘It’s like I’m back in 90s Lahore’: Jemima Goldsmith accuses Pakistan Muslim League ‘of targeting her children’ as they plan protest outside her west London house against her ex-husband ousted PM Imran Khan

Jemima Goldsmith and her children have been targeted by protesters against her ex-husband, ousted Prime Minister of Pakistan Imran Khan.

The PML is one of the three opposition parties in Pakistan against Khan’s Tehreek-e-Insaf organisation.

The former cricketer was ousted as Prime Minister of Pakistan on April 9 after losing a dramatic late-night vote of no-confidence from MPs including members of his own party.

Last week, protesters in support of Imran Khan gathered outside the London home of the country’s former leader Nawaz Sharif calling for an end of state ‘corruption’.

Now, in a tit-for-tat retaliation rally, PML campaigners in London are planning to protest outside Ms Goldsmith’s home this Sunday.

She said on Twitter: ‘Protests outside my house, targeting my children, antisemitic abuse on social media…. It’s almost like I’m back in 90s Lahore. 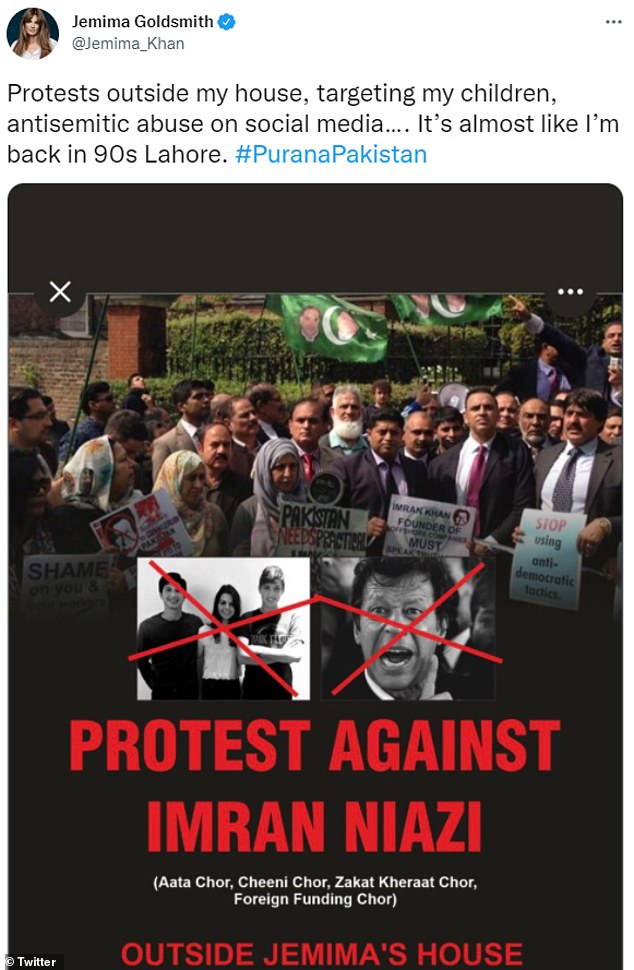 Ms Goldsmith highlighted the protest at her house on Twitter, saying it was unfair and not on 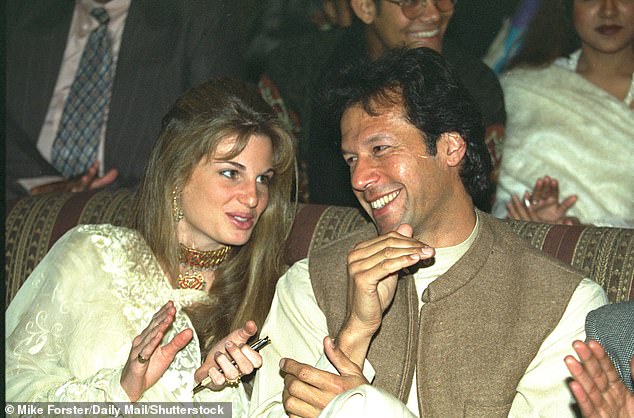 Jemima Khan with husband Imran Khan in 1995. They split in 2004 after less than ten years

‘With respect, The difference is that I have got nothing to do with Pakistani politics and neither have my children.

‘They are low- key private individuals who are not even on social media.’

But Mr Ali seemed unconvinced and called for the rally to go ahead.

He wrote:  ‘There is only one person responsible for this: Imran Khan. 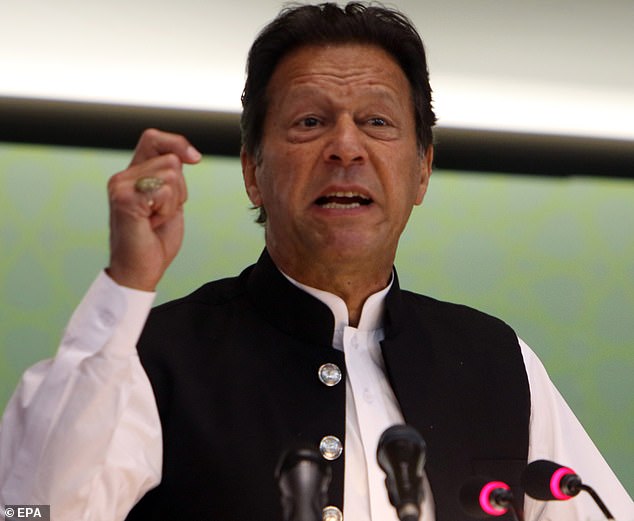 Liaquat Ali Khan: Pakistan’s first prime minister. Took office in August 1947. He was assassinated at a political rally on Oct. 16, 1951.

Chaudhri Mohammad Ali: Took office in August 1955. Internal differences in the ruling party led to his ouster on Sept. 12, 1956.

Hussain Shaheed Suhrawardy: Took office on Sept. 12, 1956. Forced from office after differences with other power centres on Oct. 18, 1957.

Muhammad Khan Junejo: Took office in March 1985. He was dismissed on May 29, 1988, by the military chief who was also the president.

Benazir Bhutto: Took office on Dec. 2, 1988. Her government was dismissed on Aug. 6, 1990, by the president, a close aid of the deceased military ruler, on charges of corruption.

Mian Muhammad Nawaz Sharif: Took office Nov. 6, 1990. His government was also dismissed by the president on similar charges to Bhutto on April 18, 1993.

Benazir Bhutto: Returned to power for her second tenure in Oct. 19, 1993. Was dismissed by the president once again on charges of misgovernance on Nov. 5, 1996.

Mir Zafarullah Khan Jamali: Elected prime minister during military rule in November 2002. He resigned after differences with the military on June 26, 2004.

Yousaf Raza Gilani: Elected prime minister on March 25, 2008. He was disqualified by the Supreme Court of Pakistan in 2012 on charges of ‘contempt of court’

Nawaz Sharif: Elected prime minister for a third time on June 5, 2013. He was dismissed by the Supreme Court of Pakistan on charges of concealing assets on July 28, 2017.

‘He has ordered attacks and protests outside homes of his political opponents, he incites hate, homophobia and terrorism on daily basis.

‘Our protest will be peaceful and non-violent. Condemn Imran Khan.’

Earlier he had urged: ‘There will be a protest outside the house of Imran Niazi’s ex-wife in London on Sunday.

‘So that her children also know how mean their father is. ‘

Khan and his allies had tried to sidestep the crunch vote by dissolving parliament and calling early elections, but Pakistan’s Supreme Court sensationally ruled that the government had acted illegally.

Pakistan’s parliament met on Saturday to proceed with the vote following a 13-hour impasse in which Khan’s Tehreek-e-Insaf party used filibustering in an attempt to slow the process.

Several of the Prime Minister’s closest allies and a key coalition party deserted him as opposition parties swooped in and agreed to oust the embattled leader.

The combined opposition that spans the political spectrum from the left to the radically religious will form the new government, with the head of one of the largest parties, the Pakistani Muslim League, taking over as prime minister.

As both Khan’s supporters and his opponents took the streets, dozens of people were pictured being detained after clashing with police in the capital late on Saturday as outcry against the leader’s removal continues.

Khan’s removal from office continues Pakistan’s ugly record with Prime Ministers, with not a single leader completing their full five-year tenure since 1947.

In an impassioned speech on Friday, Khan doubled down on claims that his opponents colluded with the United States to unseat him after visiting Putin’s Russia following the invasion of Ukraine.

Khan urged his supporters to take to the streets, particularly young people who have been the backbone of his support since the former cricket star turned conservative politician came to power in 2018.

Thousands appeared to heed his call with his allies turning out to the streets of Islamabad in droves as protests against the no-confidence vote threatened to turn ugly on Saturday.

Last Sunday some of his supporters gathered outside the London home of the country’s former leader Nawaz Sharif calling for an end of state ‘corruption’.

Many demonstrators were angry as they converged in Hyde Park and outside Sharif’s home – Avenfield House in Mayfair – and vowed to oppose any ‘imported’ government.

One woman said: ‘It’s about our prime minister being hoisted out by corrupt politicians, they were corrupt before in Pakistan.

‘He [Khan] was voted in by the people and unfortunately, due to America’s pressure, they brought all the other political parties together and hoisted him out.’

Others vowed to send ‘no remittances’ to Pakistan until Khan was reinstated as Prime Minister.

Avenfield is where Pakistan’s super-rich former prime minister, Nawaz Sharif, has lived when in London since 1993.

He knocked four luxury flats together to make a single mansion, now worth at least £7 million. 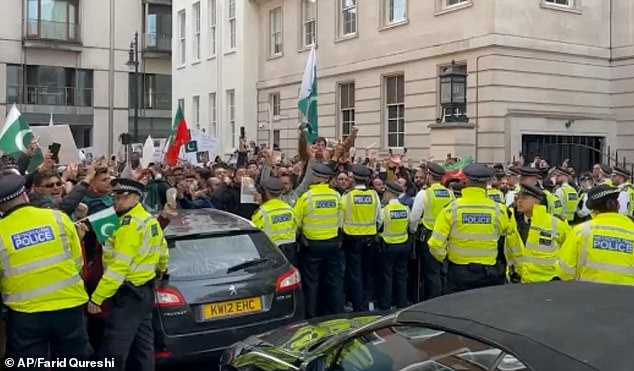 How to get premium high-resolution metaverse and NFT images
Technology