Items thrown by tornado found hundreds of miles away

Veteran card, black and white family photos and a Bible are among precious personal items found up to 130 miles away after devastating tornado blasted through the Midwest killing 74 and flattening thousands of homes

The deadly tornados that tore through Kentucky were so powerful that they blew residents’ personal belongings up to 130 miles away, and now people are reuniting devastated families who lost everything – family photos, a VFW card, checks and even pets – with pieces of their lives that turned up in unusual places.

Midwesterners have taken to social media to locate the owners of pictures, Bibles, baby quilts, Christmas ornaments and other keepsakes after deadly tornadoes swept across six states this weekend.

A Facebook group, Quad State Tornado Found Items, is flooded with posts detailing items – and even pets – that people have found. In many cases, the owners lived 100 miles away from where their belongings ended up.

A black and white photo of a woman in a striped sundress and headscarf holding a little boy on her lap traveled almost 130 miles in winds that reached up to 140 miles per hour in the storm.

Many harnessed the power of social media, with many people using Facebook over the weekend to find the owners of photos, checks and even a VFW card more than 100 miles away.

On Monday, Jean Merryman posted that she found a Polaroid picture of a man in a baseball cap posing with his dog outside a brick building, saying she found it in Brandenberg, Kentucky

Within twelve hours, she found out that the picture traveled a whopping 110 miles, when Leigh Ann Carner Morris commented on the picture: ‘That’s my Dad!’

She said he lost his house in Princeton, Kentucky in the tornado on Friday and they were still trying to find some of his belonging from when he competed in coon hunting competitions.

‘He’s always been an avid coon hunter,’ Morris said of her father, noting that unfortunately ‘ he had to have his dog put down this morning. She was injured in the tornado.’ 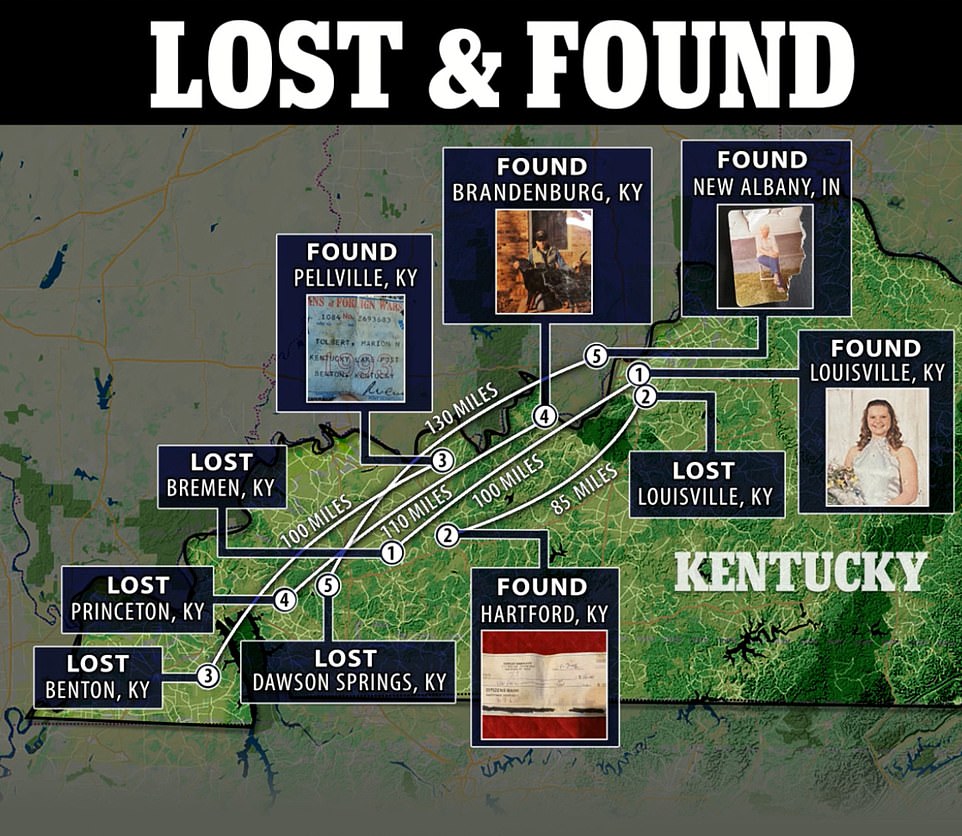 The tornados blew residents’ personal belongings up to 130 miles away, with wind speeds of up to 40 mph 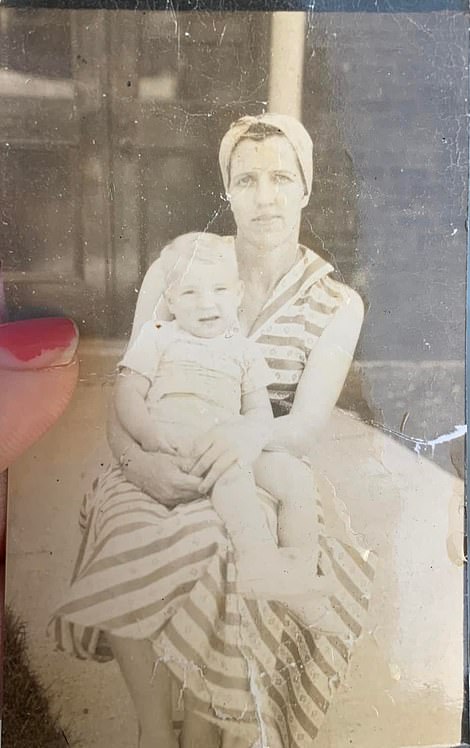 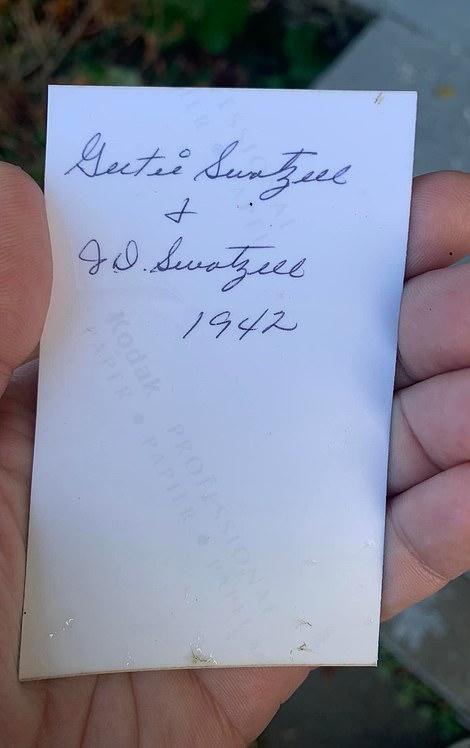 Katie Posten, of New Albany, Indiana, found a family photo on her windshield and was able to locate the Kentucky family it belonged to, 130 miles away, through a public appeal on Facebook 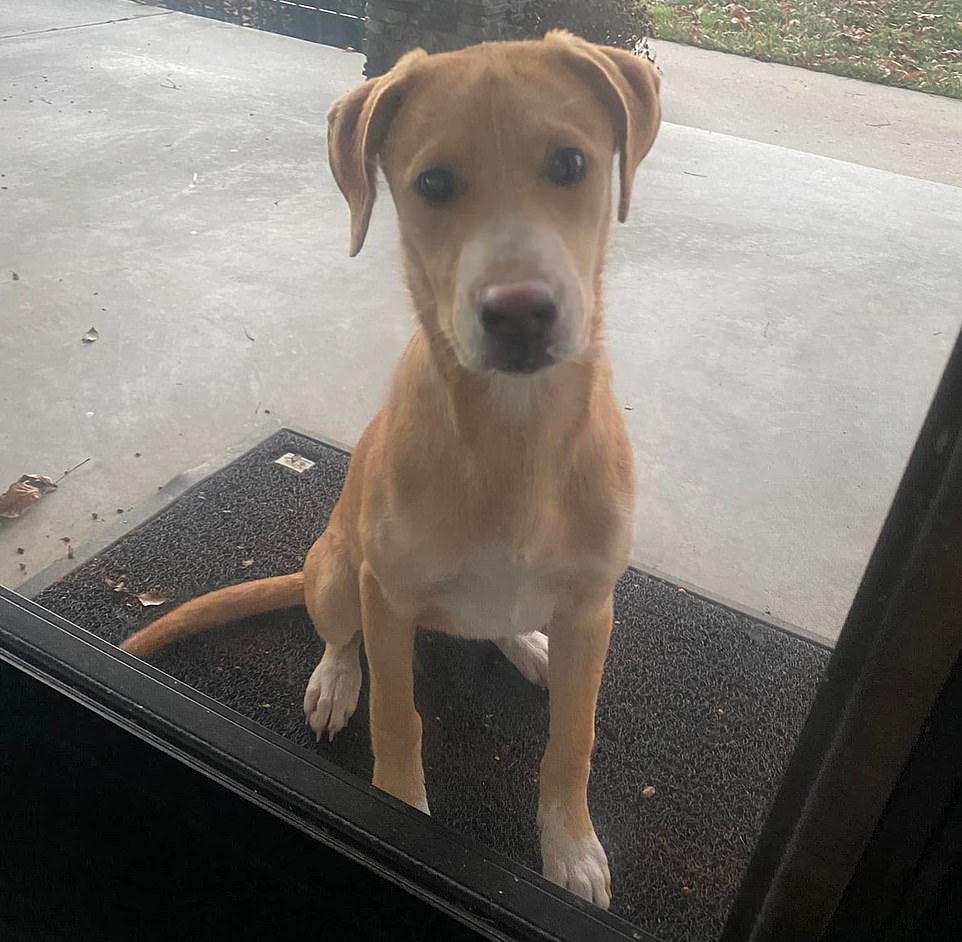 Some have also used the Quad State Tornado Facebook group to reunite pet owners with their displaced fur babies, such as this dog found in Calloway County, Kentucky 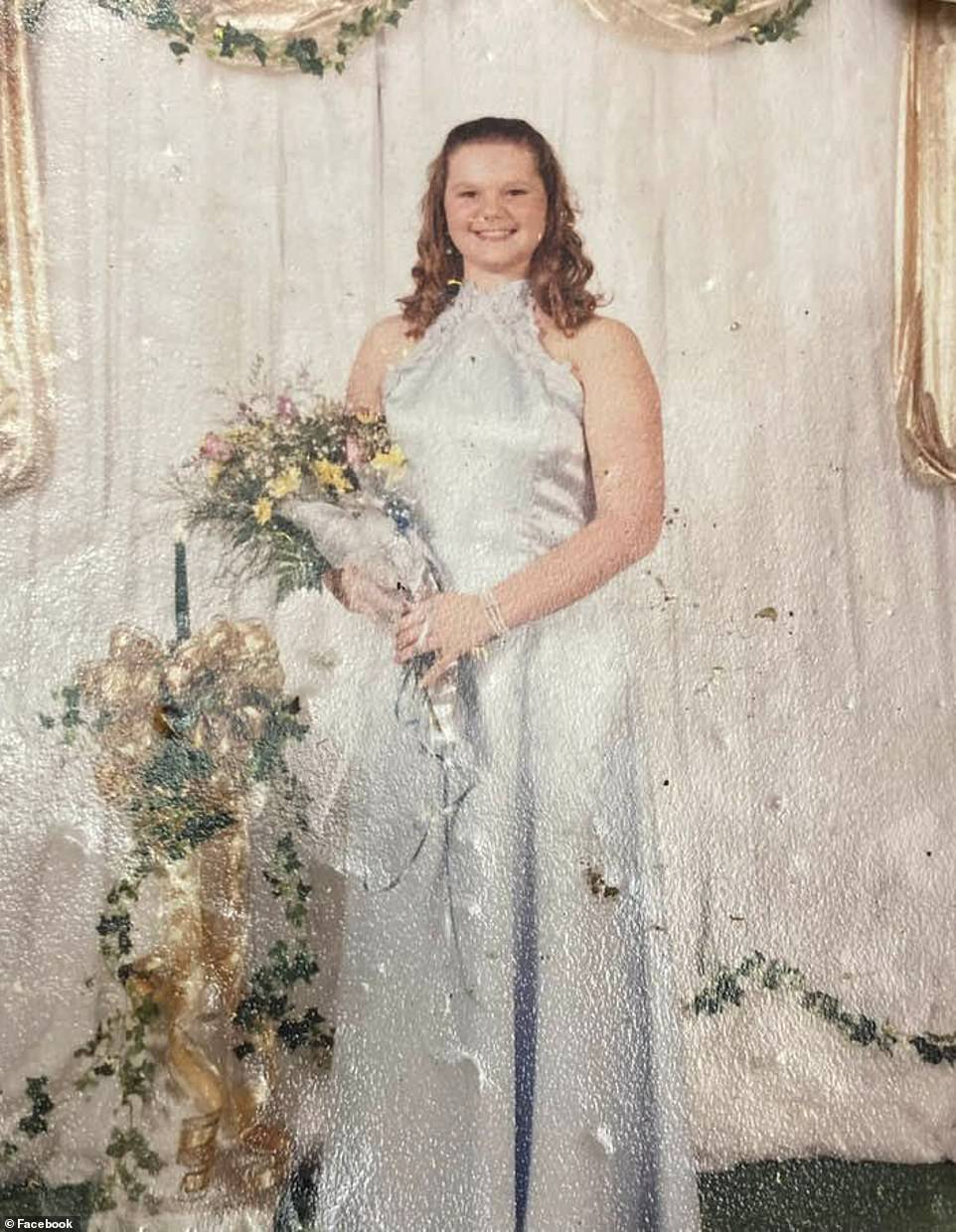 Deanadave Bryant posted on Monday she found this senior prom picture on the East End of Louisville, noting that ‘if anyone is missing it [I] will gladly mail you.’ Within just an hour, Kenya Suzanne Daugherty said the girl is her sister, out in Bremen, approximately 100 miles away 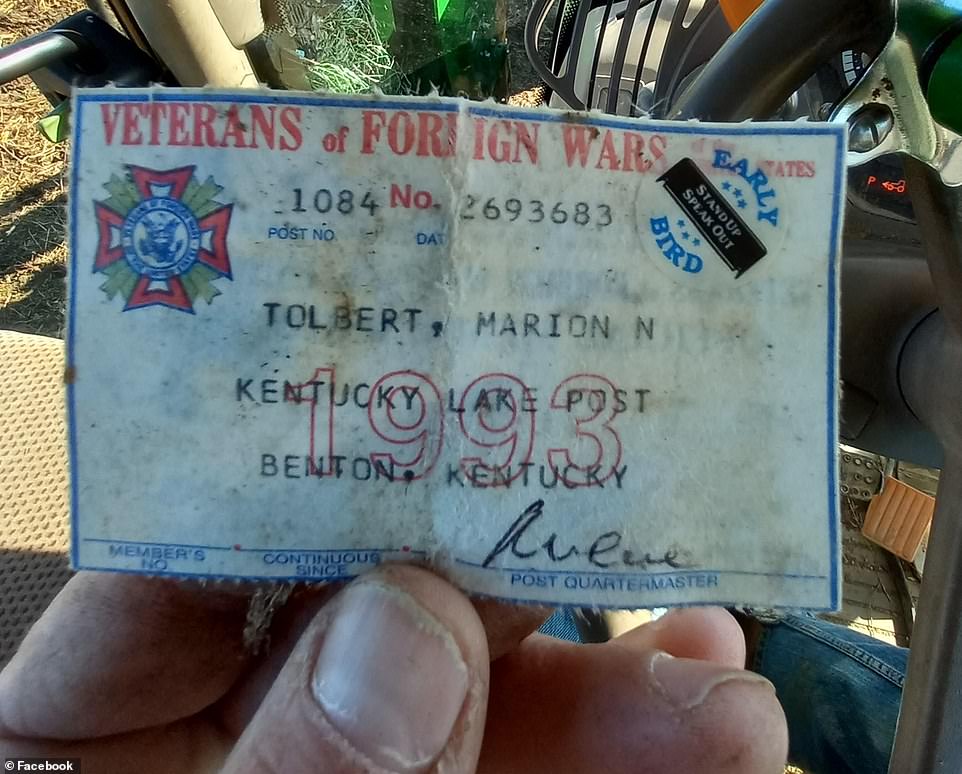 Chris Kramer posted that he found a Veterans of Foreign Wars card circa 1993 belonging to a Marion Tolbert, that originated 100 miles away at Matthew Tolbert’s grandfather’s house in Benton

Morris said her parents are now staying with her and asked whether she could get the picture back to her father, claiming: ‘We’ve only found a few of his pictures and memorabilia from when he competed.’

Savannah Kessinger also found a Bible that was severely weathered by the storm, posting photos of the book, which was covered in debris and torn at the spine saying she found it in Dawson Springs.

It featured several pages of ancestral history, listing births in the owner’s family dating back to 1914 and as recently as August 2021.

Rihana McKnight, commenting on Kessinger’s post, revealed that the book belong to her grandmother.

‘Her trailer was on Flower Street and is completely gone now,’ McKnight shared.

According to Kessinger’s post, the Bible was found down the street at the intersection of Flower and School Streets.

Kessinger took the book with her to nearby Madisonville where she is keeping it safe until it can be reunited with McKnight and her family. 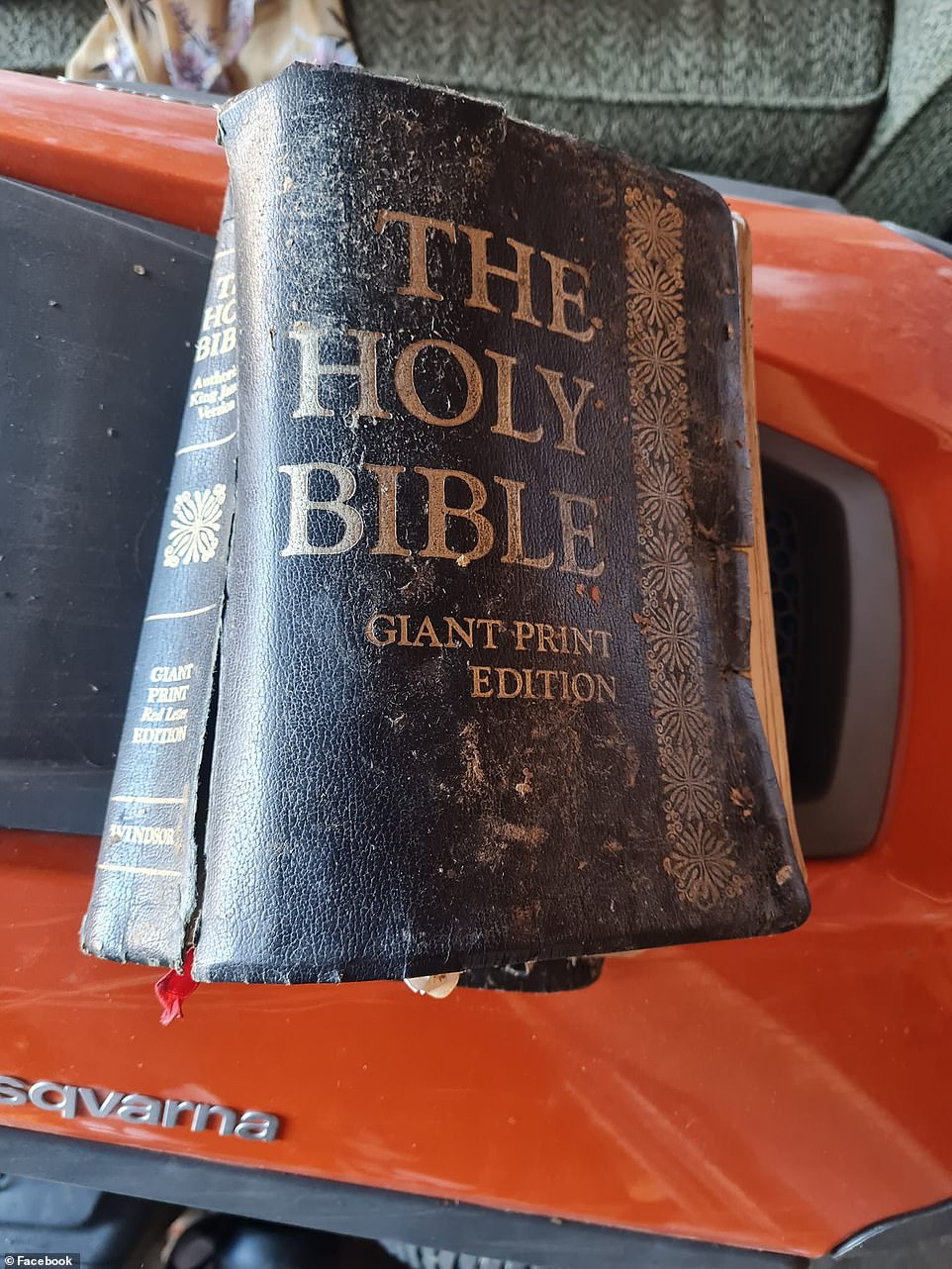 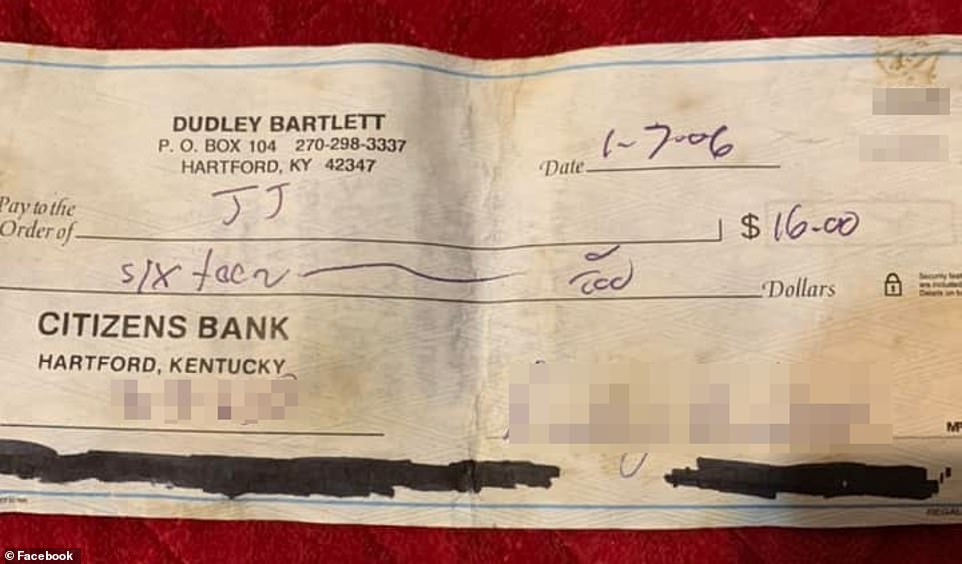 Leann Hall Blanchard managed to find a check for $16 in her backyard in Louisville, about 85 miles, or 104 miles when driving, from where it originated in Hartford, Kentucky 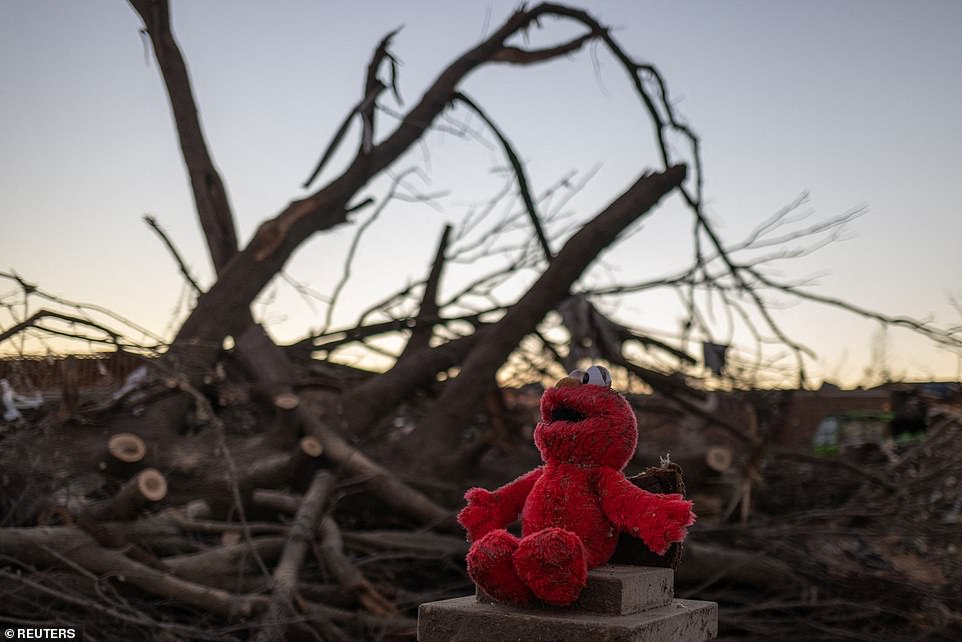 An Elmo Muppet stuffed toy was found amid the wreckage of the powerful tornado in Mayfield, Kentucky on Monday 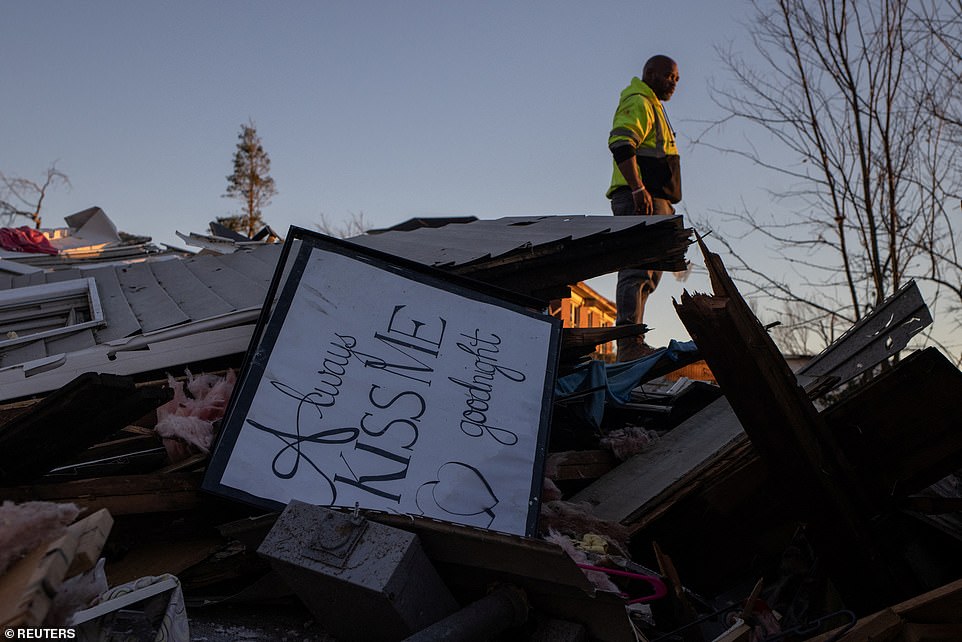 A man stands above the wreckage of his home, with a sign reading ‘Always kiss me goodnight’ still intact 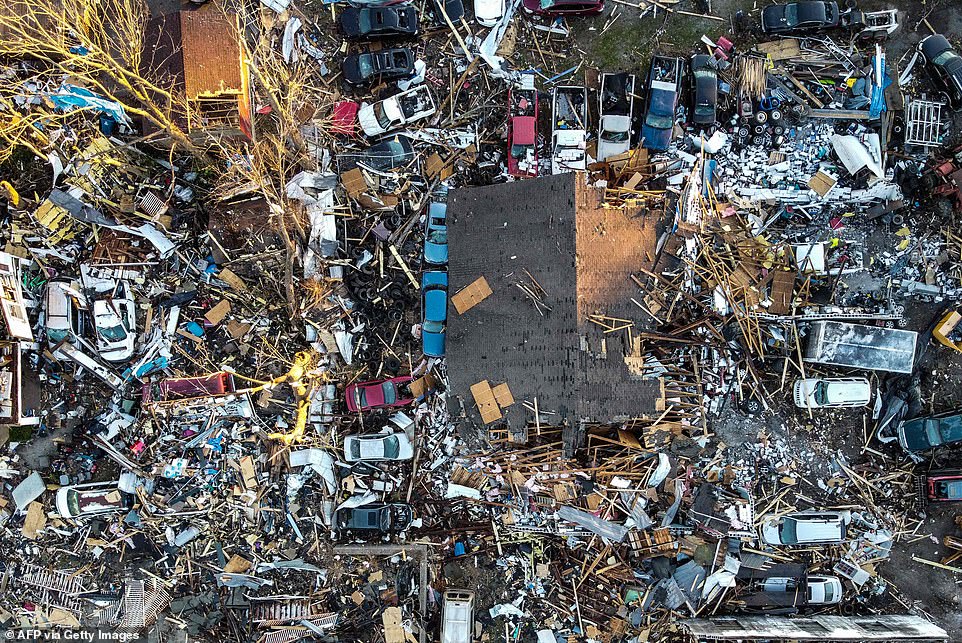 Chris Kramer also posted on Sunday that he found a Veterans of Foreign Wars card circa 1993 belonging to a Marion Tolbert that originated 100 miles away at Matthew Tolbert’s grandfather’s house in Benton.

And Deanadave Bryant posted on Monday she found a senior prom picture on the East End of Louisville, noting that ‘if anyone is missing it [I] will gladly mail you.’

Within just an hour, Kenya Suzanne Daugherty said the girl pictured in a white dress is her sister, out in Bremen, approximately 100 miles away.

‘It’s so crazy how far this can travel,’ Daugherty wrote.

Katie Posten, who lives in New Albany, Indiana, found the historic picture on her car parked in her driveway on Saturday, and noticed that on the back, written in cursive, it said: ‘Gertie Swatzell & J.D. Swatzell 1942.’

She decided to post an image of the photo to Facebook and Twitter, asking the public for help in finding its owners, saying she hoped someone on social media would have a connection with the family in the photo.

The post was shared widely on Facebook, and sure enough, someone came across it who is friends with a man with the same last name, tagging him in the photo.

A lot of people shared it on Facebook. Someone came across it who is friends with a man with the same last name, and they tagged him.

That man was Cole Swatzell, who commented that the photo belonged to family members in Dawson Springs, Kentucky, almost 130 miles away from New Albany.

Posten said she plans to return the photo to the Swatzell family sometime this week.

‘It’s really remarkable, definitely one of those things, given all that has happened, that makes you consider how valuable things are – memories, family heirlooms, and those kinds of things,’ Posten said.

‘It shows you the power of social media for good,’ she added. ‘It was encouraging that immediately there were tons of replies from people, looking up ancestry records, and saying “I know someone who knows someone and I’d like to help.”‘

Meanwhile, Leann Hall Blanchard managed to find a check for $16 in her backyard in Louisville, about 85 miles, or 104 miles when driving, from where it originated in Hartford.

Laura Snyder promptly informed Blanchard on Facebook that the check belongs to a family member, but there was ‘probably no need to mail it.

‘It’s uncanny that “air mail” brought it 104 miles from Louisville to Hartford,’ she wrote.

Some on the Quad State Tornado Found Facebook group were still searching for the owners of numerous personal belongings, including a Bible, an ornament and even a dog as of Monday night.

There have been multiple displaced pets following the tornadoes and the group has started a thread specifically for helping reunite fur babies and their owners.

Group members are also offering up donations, suh as toiletries, small heaters and breast milk for those displaced in the barrage of tornadoes that tore across the Midwest over the weekend and killed at least 74 people in Kentucky.

The state was by far the worst struck on Friday night by 30 tornadoes that ripped across the Midwest, killing another 14 people in Illinois, Tennessee, Arkansas and Missouri.

One twister carved a track that could rival the longest on record, as the stormfront smashed apart a candle factory in Kentucky, crushed a nursing home in Arkansas and flattened an Amazon distribution center in Illinois.

On Monday, Governor Andy Beshear said the death toll was likely to rise as another 109 people remained missing.