‘I terrified people’: Mal McGuinness beat the demons of the darkroom

In the era when kids straight out of school were pumped through the Police Academy, Mal McGuinness was different. A knockabout who boxed professionally and worked on oil rigs, he decided to become a cop after reading a bestseller by a former US police officer.

The book, however, was not an inspirational read on the nobility of law enforcement, nor was it a list of heroic sacrifices by police on duty. It was the black-as-night and laugh-out-loud novel The Choirboys, by Los Angeles policeman Joseph Wambaugh, that exposed a world of on-duty drinking, cynical contempt for the law and off-duty sexual exploits. 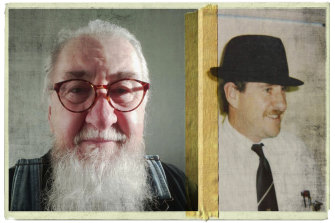 Mal McGuinness as he is today and (right) hamming it up with the Major Crimes Squad in the late 1980s.Credit:

In 1977, during an 11-month campervan trip in Europe, McGuinness read the book. “I thought ‘how good is this?’ it was hilarious,” he says.

Six weeks after returning to Melbourne in 1978 he joined the job that has left him with a stack of warm memories, a suitcase of guilt and a lifetime of mental scars.

While McGuinness breezed through the Academy, it was his street smarts that made him a cut above the average uniformed cop.

The kid from the country was an only child brought up in a home of family violence. His father “drank every day” and his parents “argued every night”.

Eventually the family moved in with his grandmother, who ran an Abbotsford boarding house full of “battlers and scallywags”. SP bookies worked in the backstreets, sly grogging was prolific and local brothers joined the international shoplifting “Kangaroo Gang” to later become major drug dealers.

When McGuinness was 10 his father caught him smoking a cigar and as punishment beat him with a riding crop and locked him in a small shed. The welts took a week to heal and his regular nightmares are of being imprisoned in a confined space.

“I started drinking in pubs and nightclubs from the age of 15. I smoked at home from the same age. I either surfed on weekends with mates or went to nightclubs. At 18 I got into pro boxing and had three fights in three weeks, broke my right thumb and gave that game away.”

Once he left the Academy he headed to Collingwood, at that time the domain of some of Victoria’s most notorious crime families. It was a time when the station was filled with police who were experts at putting people in jail and a few who were lucky not to end up in the same place. “Catching crooks was a sport, and we all wanted to outdo each other in the race to become a member of the CIB.”

He was selected to work for the Delta Taskforce, a cutting-edge specialist unit investigating child sexual exploitation at a time when few acknowledged it was a hidden epidemic.

It was the first time McGuinness suffered anxiety and depression. Little wonder, for he was not only an investigator into traumatic child sex cases but a secret victim, having been molested at the age of 10.

He concealed both the attack and his mental battles. Back then you were expected to shut up and get on with it. Doubts were for backroom staff and social workers, not hardened detectives.

It would take nearly 50 years before he would confront the demon in his past.

In 1960 McGuinness moved to Northcote and was spending most of his spare time at the local outdoor pool where he met 19-year-old part-time swimming teacher David Alan Bowen.

“Bowen was a young medical student who went on to destroy other pre-pubescent boys’ lives. Without realising I was being groomed by Bowen, I got to know him at the pool with some other boys of my age. 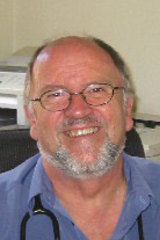 “I think Bowen knew I wanted to be a doctor and as it turned out, he was studying medicine at Melbourne University. He invited me to attend the opening day at uni that year to show me around his faculty. He picked me up in his car, and together we went to the uni in the afternoon for show and tell.”

Bowen, an amateur photographer, persuaded the boy to come to his house to look at his photos, trapping him in the darkroom. “Once inside he closed the door behind us and turned the lights off. He then indecently assaulted me.

“I panicked and was able to get out of his house and report the incident to my parents. My parents confronted his parents at his house. I was interrogated by them as if I was a liar.”

As a sharp-end cop who locked up crooks and not a little boy locked in a darkroom, he thought those memories were buried so deep they would never surface. He was wrong.

He was assigned to the tough-as-nails Major Crime Squad, Arson Squad and inner-suburban crime branches where there was an unlimited number of crooks to catch.

Then he was asked to work on bent cops in the Sentinel Taskforce, investigating a group of drug squad detectives alleged to have taken bribes, tipped off crooks and sold drugs.

“Needless to say, I was persona non grata after my appointment to the ‘toe cutters’ and was naturally ostracised by many members of the force. That was OK to me. I never joined the job to sell drugs, and I was comfortable in my decision to join the toe cutters.”

With a reputation for honesty and the capacity to take on long-term investigations he went to the super-secret Covert Unit at the very secret Security Intelligence Unit (SIU). This was the mob assigned to monitor, infiltrate and disrupt potential terrorist groups.

It was 12 months before the 2001 Twin Towers attack and few were aware that a terrorist storm cloud would envelop the world. The SIU committed to a new and risky approach, submerging inexperienced undercover operatives deep into dangerous groups, sometimes for years.

About six police, fresh out of the Academy, were selected to go undercover. The logic was they had not been out on the street long enough to pick up police mannerisms that could give them away.

Young cops from different backgrounds were particularly valued for their capacity to observe without being suspected of being double agents.

McGuinness set up real businesses as a front for some of the operatives that traded for years. “We became the eyes and ears for some national security agencies,” he says.

The trouble was the young cops had not learned the discipline of policing and were sometimes difficult to control.

It was 2006 and an already dangerously stressed McGuinness picked up the paper to read that David Alan Bowen was appearing at the County Court on historical child sex offences. (Bowen would be found guilty of molesting eight boys in the 1960s and ’70s in three separate trials.)

“I felt a rush of emotion and recalled events from all those years before. I went to the County Court to confront old forgotten demons.”

After finding the prosecutor to tell him he was also a victim, “I sat in my work car outside and suffered a complete breakdown. I can tell you I cried my heart out for hours after that. I remembered how it felt to be held against my will.

“I was immediately haunted by the fact as a long-serving detective that I had been instrumental in conducting many raids over the years on families with children in the dead of night which were frightening. Not only had I been frightened as a kid, but I also had been responsible for causing fear and doing the same to others. I now know I terrified people.” 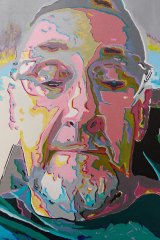 When he told colleagues of his feelings, they would tell him “you were just doing your job”. It was little consolation: “I couldn’t come to terms with what I had done.”

A few years back I saw McGuinness at a boxing night. He said he was wracked with guilt about carrying out early-morning raids of suspects’ homes, operations many old cops treat as badges of honour.

He immediately took leave, sought psychiatric help and was diagnosed with depression and anxiety. He retired in 2008. “I wanted nothing to do with [Victoria Police] and walked away. I had to somehow heal inside, and It took a few good years or so to find that peace that I needed.”

He went bush, took up painting and gold prospecting. It was never going to be a smooth recovery and there were lapses into that dark place where he was being held captive against his will, but there were always more good days than bad.

“Vicpol teaches you to assume the mantle, you have to do a bit of pretending to polish the image. I put my mask on to cope and be accepted.

“It was a pretty wild ride. There was a lot of fun mixed with stress and anxiety most of the time.”

Yet he knows that in one way he lived a lie, only showing his closest colleagues the image of a hard-at-it cop while hiding the real Mal McGuinness with a fog of war stories and late-night drinking sessions. To do otherwise in that macho world was to appear weak.

“These days I don’t mind talking about the dark side of mental health. I am not embarrassed. I do not fear anything anymore.”

Sheriff says weapon fired by Baldwin had a live round