Hope 20 more whales can be saved at Tasmanian stranding

Wildlife rescuers in Tasmania are hoping to return 20 more whales to sea on Thursday, after saving about a sixth of the group of 470 which beached themselves on the state's west coast.

However, there is little hope for the remaining animals, with around 380 believed to be dead as the rescue operation enters its fourth day. 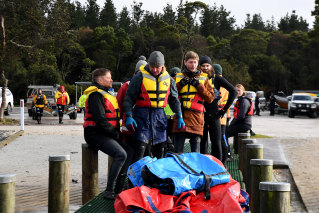 Rescue teams prepare to head out on the water at Macquarie Harbour on Thursday.Credit:Getty

The mass stranding – the largest ever in Tasmania – came to light on Monday when around 280 whales were discovered at Macquarie Harbour, near the isolated seaside town of Strahan.

On Wednesday, close to 200 additional animals were discovered seven to 10 kilometres south of the initial site. It is believed all of this group were dead.

Nic Deka, regional manager of Tasmanian Parks and Wildlife Services, said on Thursday morning there were around 20 "viable" whales at the initial site which rescuers would be working to free.

"That's where our efforts will be focused today, but at the same time we are moving to look at collection for the disposal of carcasses," he said. 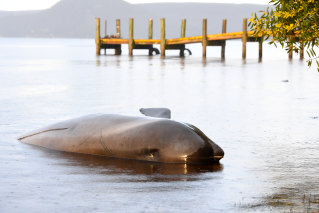 The body of a dead pilot whale at Macquarie Harbour on Thursday.Credit:Getty

He said the group had so far successfully sent 70 whales out to sea, with only the "first few" reported on Wednesday found to have rebeached.

Marine biologist Sam Thalmann, who has been involved in the rescue operation, said earlier on Thursday dreary conditions had assisted the effort by keeping the whales wet.

"It's good for whale health at the moment," he said.

Dr Thalmann said he believed the operation has been largely successful despite the deaths.

"In a mass stranding like this, massive attrition early is a common thing," he said.

Mr Deka said the nature of the isolated site meant it was unlikely additional resources or volunteers could have saved more of the animals.

"If we had more resources, it wouldn't have enabled us to do more – the site simply couldn't have coped with more," he said.

After stating on Wednesday euthanasia was not being considered, Marine Conservation Program wildlife biologist Dr Kris Carlyon said it was a possibility for four of the whales.

"That's based purely on animal welfare grounds, we've had a vet assess them and we will be looking to do that this morning," he said.

Mr Deka said he expected the 20 whales to be rescued would be the last viable whales saved in the operation.

As for the carcasses, Mr Deka said there was a preference for the dead whales to be disposed of at sea "as quickly as possible", but the operation would likely take several days subject to tide and weather conditions.

"Most of the next few days will be trying to contain the spread of carcasses, because as the whale decomposes it will bloat and float and that presents a significant navigation hazard," he explained, adding that whether the carcasses would attract sharks or present an environmental hazard were issues being worked through.

Get our Morning & Evening Edition newsletters

Not all of China is recovering from the economic hit from coronavirus at the same rate, survey finds