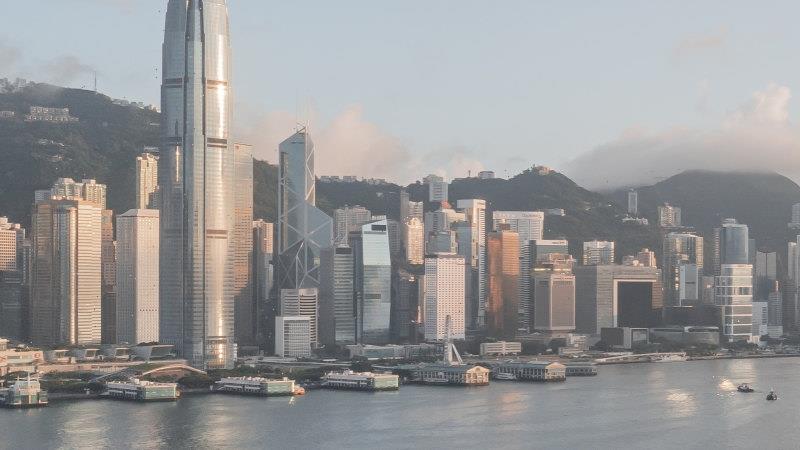 Singapore: As Western cash heads for the exits, Hong Kong Financial Secretary Paul Chan has urged Asian investors to funnel money back into the city.

Chan said Hong Kong’s economic prosperity was tied to the Chinese mainland and the city would become a global hub for transactions in the Renminbi, the Chinese currency.

He said Beijing had propelled the city into a “new development phase” tying the former British colony’s fate to the broader Guangdong-Hong Kong-Macao Greater Bay Area. 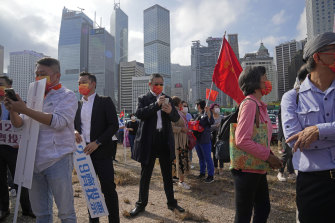 Pro-Beijing supporters hold flags and placards ahead of elections in Hong Kong in December. Credit:AP

“This has been made possible thanks to, first and foremost, the major breakthrough in our local political development in the last two years,” he said, referring to the national security laws imposed by Beijing in 2020.

But the rosy picture painted by Chan to business leaders at two Asian investment forums on Tuesday and Wednesday does not reflect the fundamental challenges facing Hong Kong.

The once-liberal city is grappling with a historic outflow of money, people, and confidence by those who used to thrive there. The same city that in the last two years has had critical newspapers raided and shut down, activists thrown in jail, artworks removed in the dead of night and civil liberties decimated. 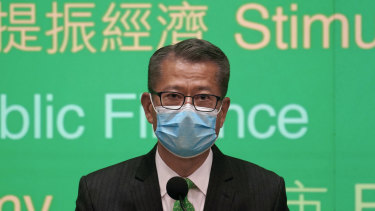 It lost 89,000 citizens to emigration in the 12 months to June last year, government records show, its second record outflow in as many years. It now faces some of its brightest talent draining further, as crackdowns on democratic freedoms and a devotion to a national COVID-zero policy take their toll.

Many of those departing are young, some are wealthy, leaving the city with a demographic problem. In total, at least 88,000 have applied for the British National Overseas scheme which allows those born before the handover in 1997 to live in the UK.

“Hong Kong’s lived-in home prices will drop 5 per cent in 2022,” a headline in Hong Kong’s South China Morning Post said on Tuesday.“Prime London homes tipped for more price upside, buoyed by Hong Kong buyers,” read the headline next to it. 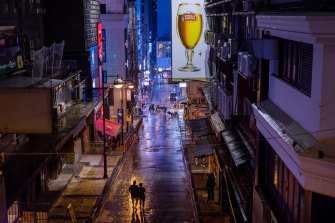 Pedestrians walk along the near deserted Lan Kwai Fong district on Hong Kong island in 2020. Credit:Getty

Chan said a bounce-back would be driven by mainland investment, but for now, with even national borders firmly closed, those that remain are having their patience tested.

The city’s supermarkets and restaurants are facing supply shortages triggered partly by a COVID-dispute with its flag carrier Cathay Pacific that has put aircrews in quarantine for a combined total of 73,000 nights this year. Primary schools will once again close on Friday, leaving half a million locked out of the classroom for the fourth time in two years. Many of its quarantine centres, designed for new infections and international arrivals serving a 21-day isolation, are full.

“Very frustrated,” said one teacher who asked not to be identified due to the national security laws that punish dissent with years in prison. “Lots of stress about primary schools closing. They are just worried about doing and saying things to make Beijing happy.”

The pursuit of COVID-zero, required by Beijing to get the border open and for the mainland investment that Chan desires, is now also looking shaky as Omicron tests the capacity of Hong Kong’s tracing system.

“It’s been difficult,” said Ben Cowling, the Chair of Epidemiology at the University of Hong Kong in a phone interview. “We haven’t achieved quarantine free travel with the mainland, and it looks like it might be difficult to do that in 2022.”

Cowling said his concern was that Hong Kong faced a prolonged fifth wave because it would not be able to lower infections all the way to zero without much more stringent measures. Only 62 per cent of the population is fully vaccinated.

Unlike the mainland – the world’s other COVID-zero holdout – Hong Kong has not yet had the capacity, surveillance, or enforcement powers to force millions of people into a testing regime that snuffs out undetected infections.

This week more than 14 million people have been tested in Tianjin on a compulsory roster that prevents them from leaving home before a result.

Cowling said for a COVID-zero strategy, this was the most effective method, but Hong Kong had been stuck between implementing some restrictions such as closing schools, while not harnessing compulsory mass test and trace measures.

“In the mainland, the lockdowns themselves are not the intervention. They are the pause button for the epidemic. The intervention that allows outbreaks to be controlled in the mainland is actually the targeted approach of case finding and contact tracing to get ahead of the virus and quarantine. And then if you can catch all the infected people and anyone who’s been exposed, then you stop the outbreak.”

Cowling said without adopting the mainlands strict enforcement strategy or joining the West in living with the virus, the city was stuck in limbo.

“Maybe by the end of this year we’ll have maybe a change of direction in terms of the current policy in Hong Kong, but most likely we will still be having the aim to get back to zero because of the mainland’s strategy.”