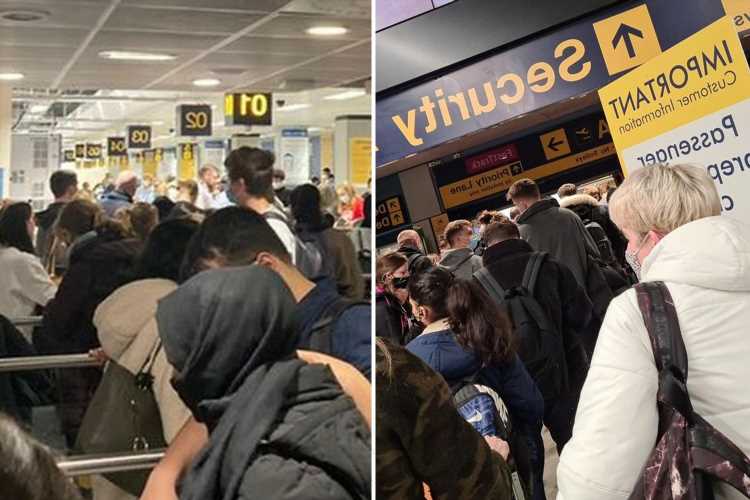 HUNDREDS of passengers have been grounded after chaos broke out at Manchester Airport following huge security queues.

The airport has been hit by claims that they are understaffed due to Covid as travellers are waiting more than three hours to get through checkpoints. 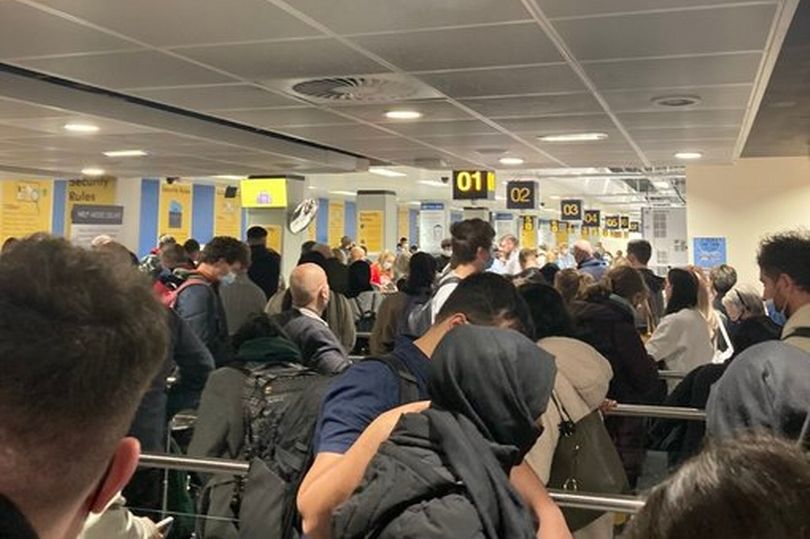 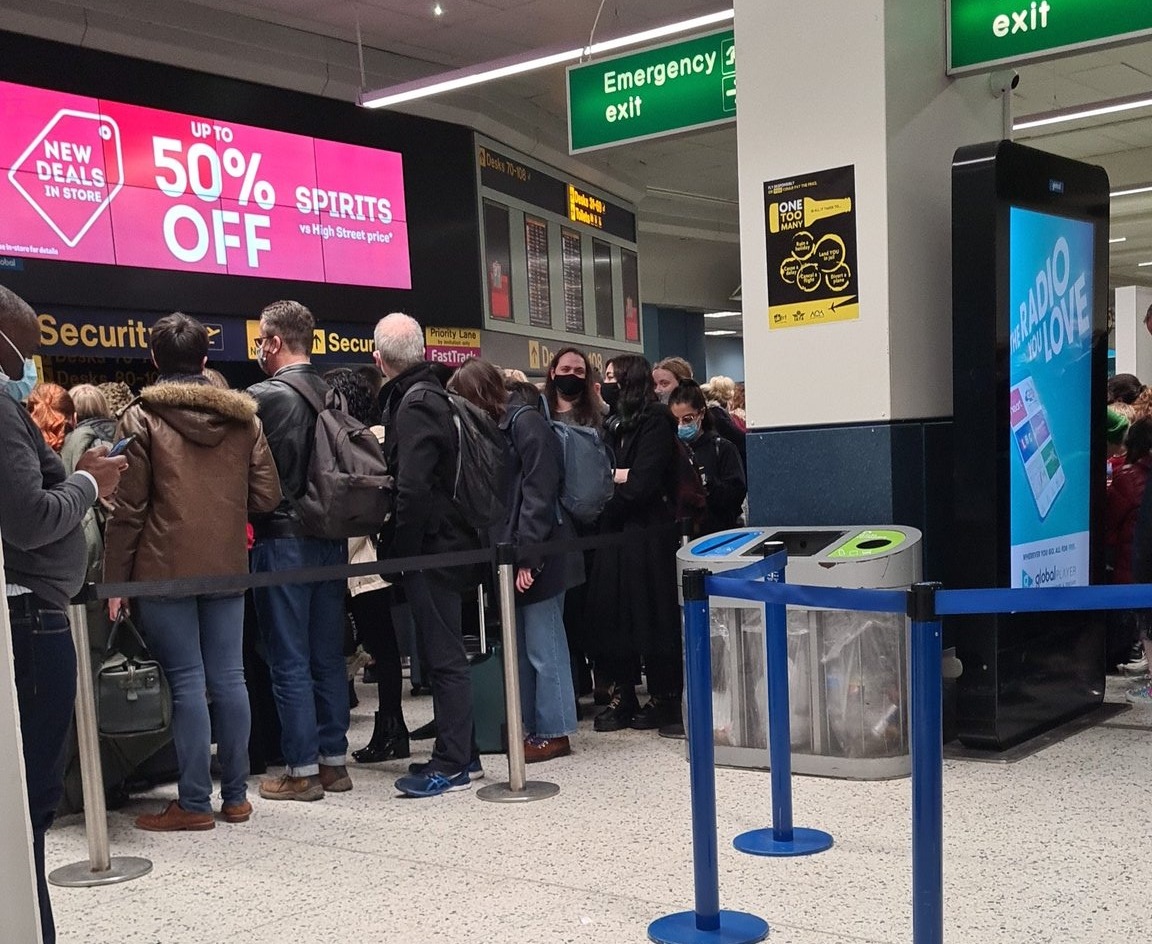 Delays have left passengers stranded at the airport as multiple flights have taken off without them.

Manchester Airport said the longest security queue was just over an hour and a half – and have now apologised to travellers affected “for any inconvenience”.

A spokesman said that they had experienced a higher number of passengers than affected and had been suffering from a higher than usual rate of staff absence.

One passenger claimed to have seen “mini stampedes”, with others having to wait overnight to catch another flight after missing theirs.

Dozens of travellers have lashed out at the airport on social media to complain that they had to fork out for PCR tests “only to attend a super spreader event before they hop on the plane!”

The airport apologised on Twitter for the “longer than normal” queues at Terminal 1 which they say were due to staff shortages not related to Covid.

TYNE UP FOR CHERYL?

Customers were asked to arrive at the airport at the earliest time their airline recommends ahead of the festive season.

Manchester Airport posted online: “We are aware security queues were longer than we would have hoped at times today and apologise for any inconvenience caused.

"We are doing all we can to minimise delays and thank customers for their understanding.”

Daniel Glynn, from Macclesfield, missed his flight to Kraków due to the long queues.

He arrived at the airport at 6pm for a 7.45pm flight and was met with long queues to even reach the security gate at Terminal 1.

Daniel said: “The queues ran all the way through the concourse with three queues into one. It was 40 minutes before I actually entered security.

“As it went on people realised they were going to miss their flights.

“There was quite a lot of pushing. There were calls for passengers to go through for late flights and those caused mini stampedes.

“There was no information from staff about what was going on or how long it would take.

“I saw people pass out – two older people and a boy. Of course the advice with Omicron is to keep our distance, but people were just stagnant in that area.

“When I asked I was told there were 75 sicknesses due to Covid. They couldn’t run the airport properly. It wasn’t really the staff’s fault.

“But I can’t see it being any different today.”

Fiona Slater has also suffered train cancellations on her way to the airport while travelling from Huddersfield.

Arriving just before 8.45pm for a 10.00pm flight to Dublin she missed her flight, telling the MEN: “I have travelled quite a bit during Covid and it’s never been an issue.

“I got talking to a man who had already missed his first flight, had to go back out to buy another ticket for another flight and was having to go through security again.

“There was zero information coming through from staff. They kept saying on the tannoy that for anyone on the Emirates flight to Dubai, it was being held back.

“But there were zero messages about Ryanair. We just assumed they would do the same for our flight.

“I got through security at 10.15pm and just before my boyfriend messaged to say he could see my flight had taken off.

“Nobody could give me any information, they just said they didn’t know."

Fiona and other passengers were forced to go back through security after buying £200 tickets on the first flight to Dublin in the morning.

An airport spokesman said: “Yesterday evening, we experienced longer queues than we would like in Terminal One.

"This is due to a higher number of passengers than expected, and a higher-than-usual rate of staff absence on the day.

“Customer service staff worked hard to assist passengers during the evening, and we diverted resources from Terminal Two to support.

“Wherever possible, travellers were prioritised within the queue, but we are aware some people missed flights and, along with their airlines, we have been working to support their onward travels as best we can.

“Due to additional pre-departures checks, as countries update guidance for travel, passengers should arrive at a minimum of three hours before their scheduled flight time if they have to check in and drop bags.

“They can arrive two hours before if travelling just with hand luggage. Passengers should also familiarise themselves with security rules, especially if they haven’t travelled for some time.

“We apologise to all affected for any inconvenience caused.” 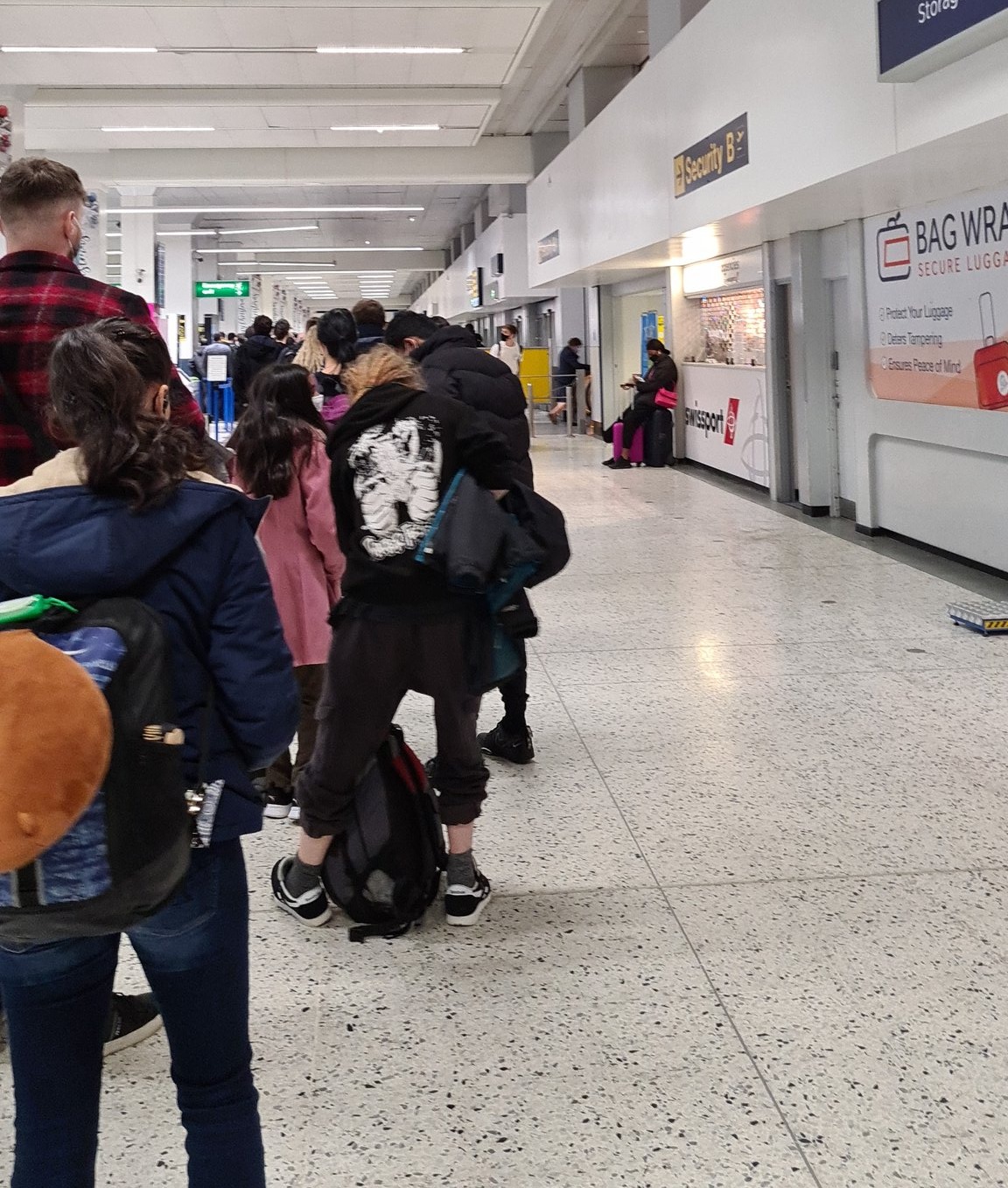