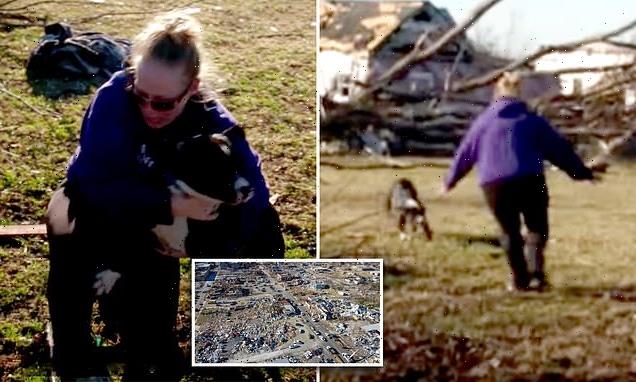 Heartwarming moment Kentucky tornado victim is reunited with her dog

‘Come here my baby!’ Heartwarming moment Kentucky tornado victim is reunited with her dog Nola after searching for her through rubble

Video footage captured the heartwarming moment a Kentucky tornado survivor was reunited with her beloved dog Nola after searching for days through the rubble-strewn neighborhood.

The unidentified woman was filmed by a Dutch journalist as she frantically scoured for her pooch in Mayfield, site of some of the worst devastation after the deadliest twister to hit the state in more than 130 years killed at least 74 people across Kentucky.

The journalist,  Lucas Waagmeester, followed the woman before pointing at a dog that was running out of a pile of debris in a now-viral video posted Tuesday.

The overcome dog owner sprinted to her pet – shouting ‘Nola! Nola!’ – before their tear-jerking reunion.

‘It’s okay. It’s okay. Come here my baby,’ she said as she hugged the excited animal. 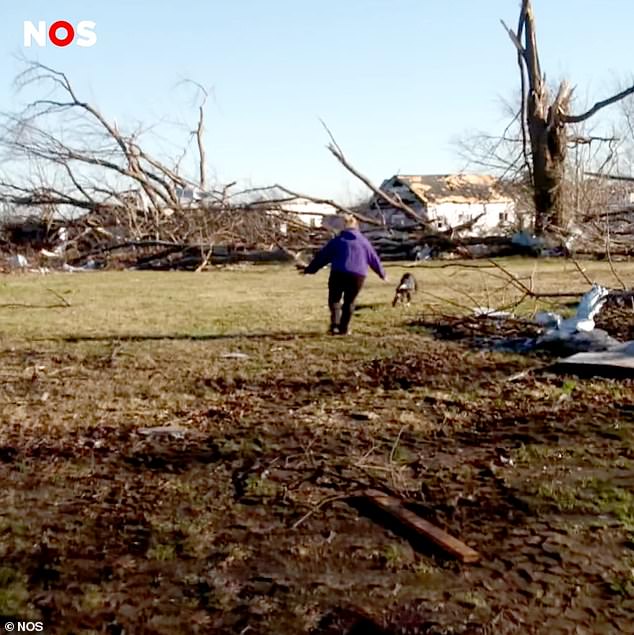 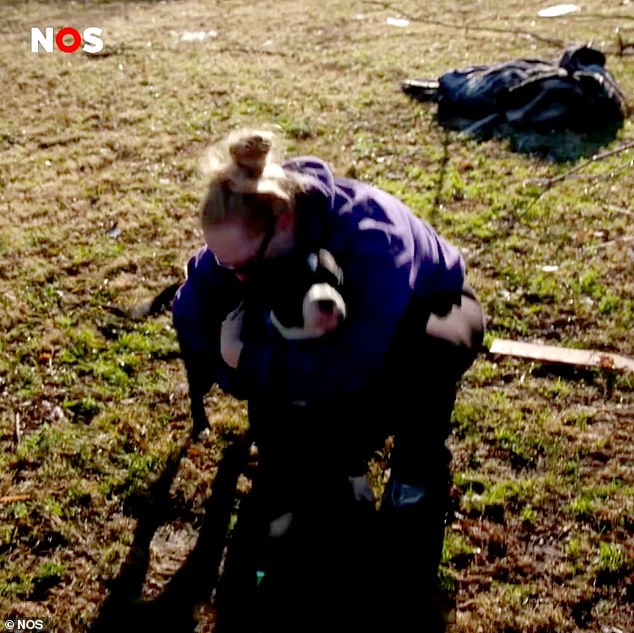 The woman told the journalist that the powerful tornado destroyed her home, blowing it ’20 foot back from where it started’ and separating her from Nola in the pile of debris.

‘Friday night when this all happened we were in the house and we lost her,’ she said describing the damage.

‘The power went out, the house started shaking, we were lifted up and we lost the dog.

‘When we finally landed we were surrounded by gas lines and power lines.’ 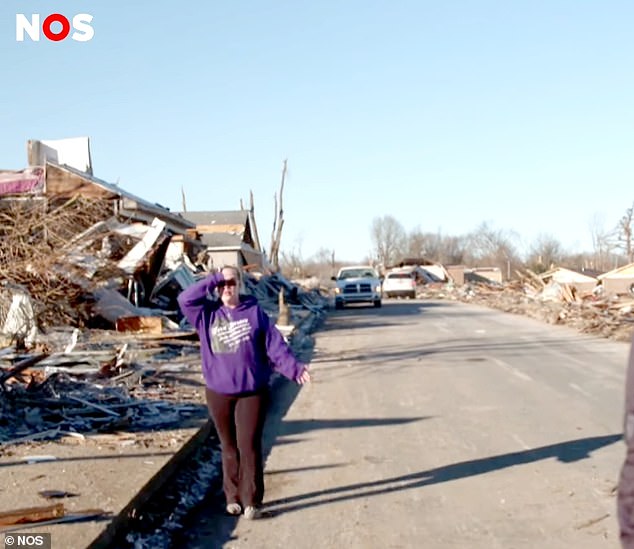 The woman approached Dutch journalist Lucas Waagmeester , who had been covering the storm, to ask him if he saw her dog 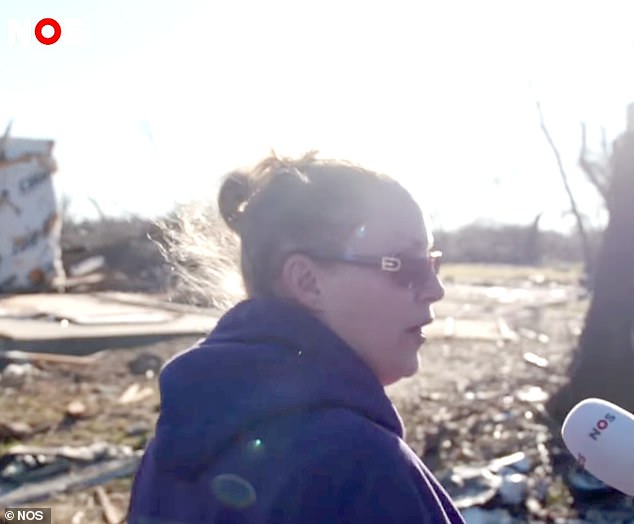 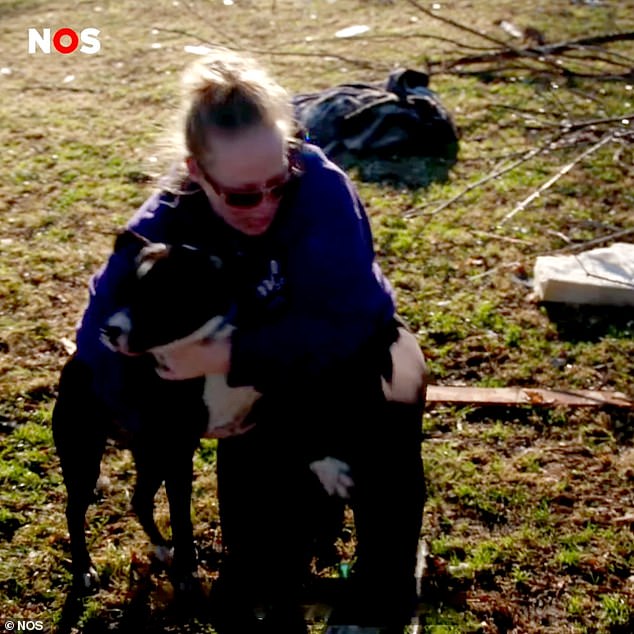 The reunion provided a brief moment of joy among the tragic ruins of the once-vibrant town. However, she was not the only Mayfield resident who was able to find their pet.

Deanna Badillo found her dog after believing that the pet was killed in the storm.

Badillo said that her and her friend had been in their home during the storm and had gotten to safety just in time.

‘My friend and I both said we’ve cheated death. I think it’s because of God’s grace and I’m not done on this planet,’ she told KHOU11.

She found out her dog was alive after a neighbor found the animal and given her to a dog shelter until he could find its owners.

Badillo also cherished be reunited with her pet.

‘It’s the little things that matter. That little dog every bit of her matters,’ she said. 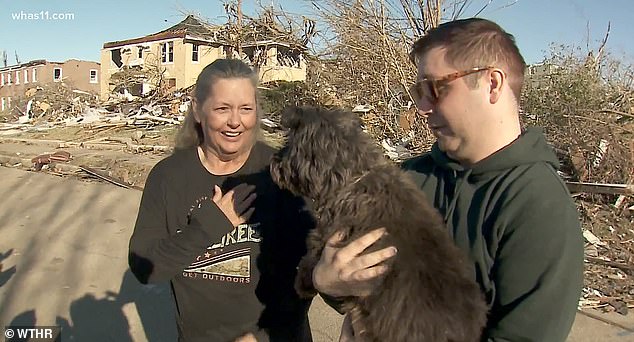 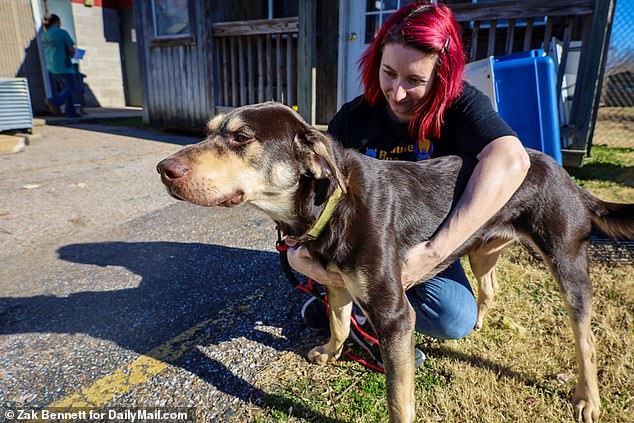 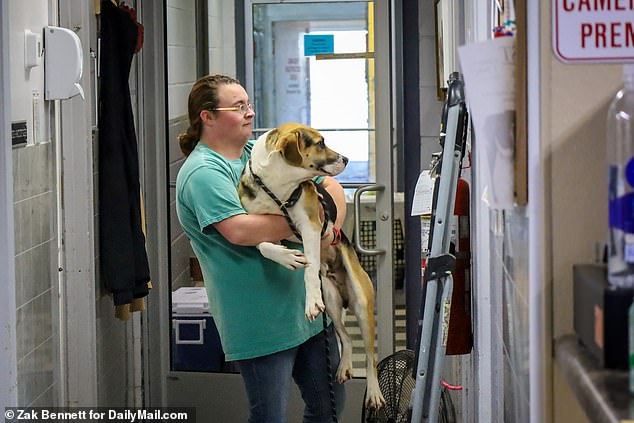 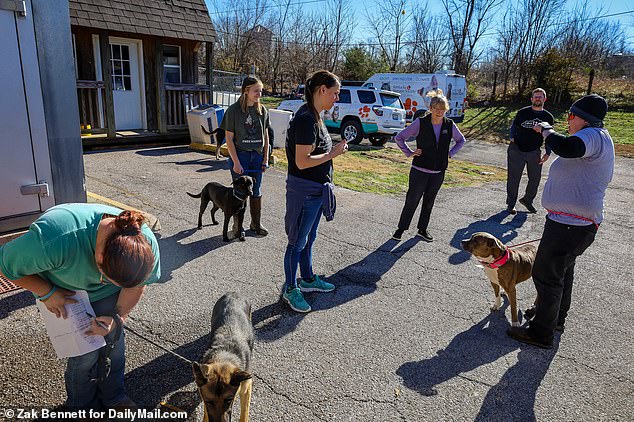 Organizations such as the Kentucky Humane Society and Mayfield-Graves County Animal Shelter have been taking care of displaced animals since the aftermath of the storm and are working to reunite them with their owners.

Speaking to DailyMail.com, David Spalding, Board President of the Mayfield-Graves County Animal Shelter, described how the shelter was lucky enough to remain standing, but now is tasked with taking in and transporting dozens of animals.

‘Today we’re moving a little over 100 animals to other rescue organizations just to make room,’ Spalding said on Wednesday.

‘We’ve never been through a situation like this. From what I’m told from the people who have been through disasters like this is that after about three or four days to expect a large influx.

‘Cats, dogs, right now the animals are scared, especially the ones that have completely lost their home. That was their comfort zone.’

DailyMail.com got a first look at the displaced animals being held in crates as they hope for their owners’ return.

Volunteers and workers were seen preparing dogs and cats for a big move out of the Kentucky shelter as it expects to be inundated with rescues the remainder of the week.

The animals are being outfitted with microchips and taken by the Humane Society of Kentucky to Massachusetts and other states where there’s more space for them.

‘Friday night we had massive destruction from an unprecedented tornado,’ Spalding said. ‘It happened to go right through the center of our town.

‘Right now we’re working with Kentucky Humane Society and other organizations to help remove the animals that we’ve already had here and take to other rescue organizations so we can take in other animals, the hurt and the injured, that have been affected during the storm,’ he said. ‘Most of them are large animals because they’re easier for people to see. The smaller pets we’re just starting to see today because people are a little more focused on what’s going on.’ 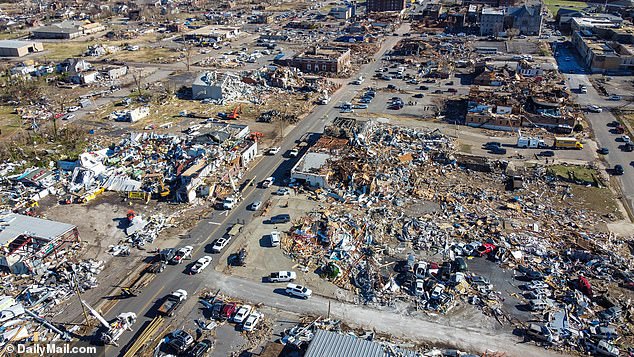 The city of Mayfield, Kentucky was hit particularly hard, including a candle manufacturing factory that was operating at the time the twister hit 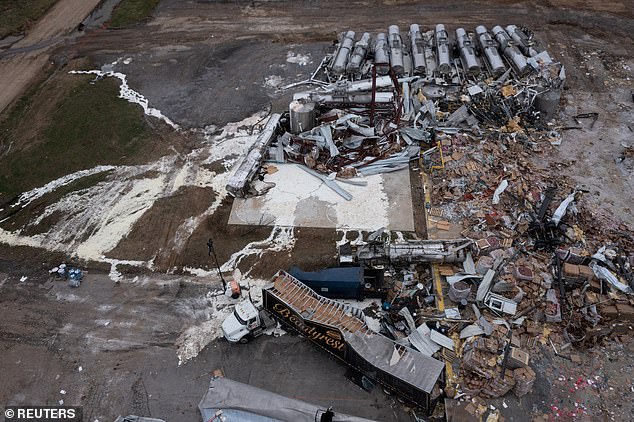 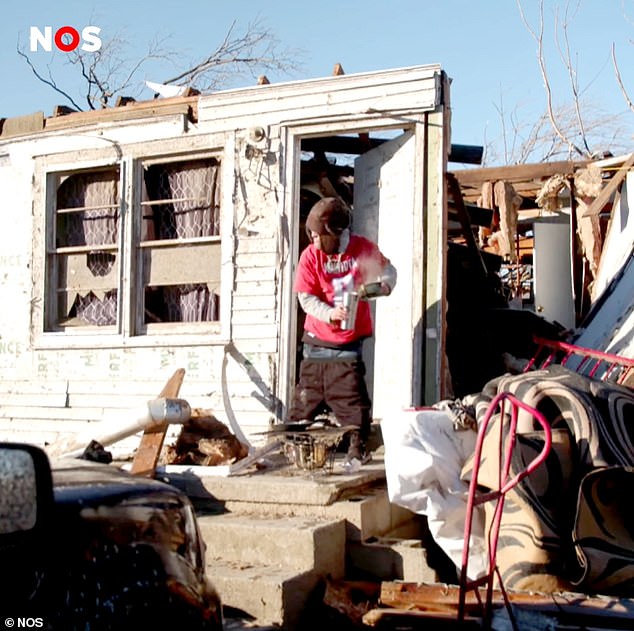 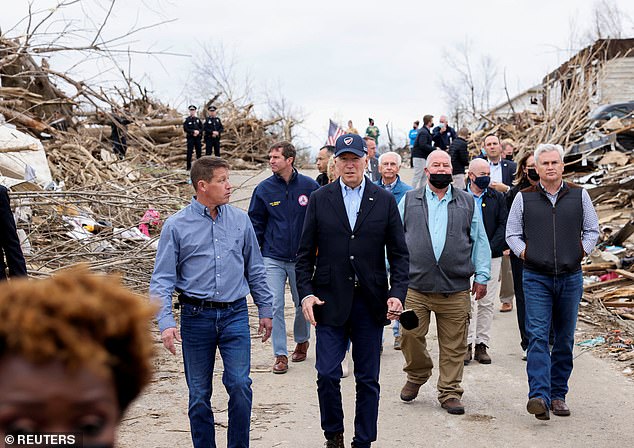 Spalding added that they expect to see far more animals rescued in the coming days.

‘The animals don’t have a place to go back to so it may take a while for them to calm down and come out where they’re visible and we can actually catch them and bring them in,’ he said.

Spalding said they will be adding microchips to animals so if in the future their owner returns, they can properly keep track and identify them for a reunion.

‘We figure that some of these folks may be displaced for one or two weeks,’ he said.

‘I haven’t been sleeping much,’ Spalding added. ‘I’m overwhelmed, yes, but manageable.’

Kat Rooks, Initiatives Director at the Kentucky Humane Center, was in one of three vans that left Louisville to pick up 27 dogs and eight cats from the Mayfield shelter.

‘This is going to be a long, long recovery there,’ Rooks told told the Courier Journal Monday night after unloading animals. ‘Animals are coming in surrendered by good Samaritans. Animals coming in as strays. [Workers] are going out and assisting search-and-rescue teams and helping to remove animals from properties that have been devastated. They are already seeing an influx and expect that to continue.’