‘Hallucinogenic dreamscape’: How Trump turned the daily coronavirus briefings into his own reality

The focus was on communicating important facts – how many cases had been recorded, where they were located – and offering Americans practical tips about preventing the spread of the virus.

But, like so much else in American life in recent weeks, the briefings have completely changed. Bit by bit, they have morphed into prime-time presidential open mic sessions that can now last up to two hours. 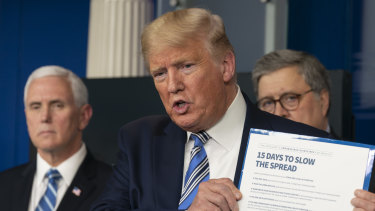 Deprived of the ability to appear at his campaign rallies, Trump uses the briefings to dominate the airwaves and ensure he remains the centre of national attention.

As the briefing on Monday (Tuesday AEDT) stretched beyond an hour, Trump asked if the press had any final questions for the officials standing beside him so they could return to their work. The President himself was happy to keep going.

"At least you will say that I’m very transparent," he said. "I think you’re going to have a hard time saying he is not transparent."

Trump's briefings have become so long that cable TV networks have started cutting them off at the halfway mark. And they are so full of questionable or false information that some prominent media figures are calling for them not to be broadcast at all.

"It's going to cost lives," MSNBC host Rachel Maddow said last week after Trump spruiked the potential use of anti-malaria medications to treat the virus.

Trump's briefing on Tuesday (Wednesday AEDT) was a snappy half hour, but it followed an hour-long session earlier in the day on a Fox News coronavirus special.

Trump's appearances increasingly feel as if they have been beamed in from an alternative universe, a hallucinogenic dreamscape that bares little resemblance to the lived reality in much of America and the rest of the world.

Trump has now abandoned the serious and sober tone he struck when speaking about the pandemic last week. He is no longer acknowledging that the crisis will last for many months. He no longer says saving lives must take precedence over the economy.

"We lose thousands and thousands of people a year to the flu," Trump said during the Fox News town hall. "We don’t turn the country off."

He said he wanted to have the economy "opened up and just raring to go" again by Easter, less than three weeks away.

In short, Trump appears to have become bored by the pandemic. His administration's social distancing guidelines have only been in place for a week, yet he is already flirting with ditching them or watering them down.

Based on Trump's optimistic rhetoric, you could think Americans' worst coronavirus days were behind them. Instead, according to the current projections, they are just around the corner.

As Trump was favourably comparing the risk of coronavirus to the regular flu, The New York Times published an opinion article by bioethicist and oncologist Ezekiel Emanuel warning: "If the United States fails to act decisively now, it will follow Italy’s course or, worse, that of Iran, and recovery may take a decade or more with extraordinary levels of death and dislocation."

According to the World Health Organisation, 40 per cent of the world's new coronavirus cases are in the US and it could soon become the epicentre of the pandemic. Thousands of new cases and hundreds of deaths are being announced every day.

Yet on Tuesday Trump said he can see "light at the end of the tunnel" and that the US is "near the end of our historic battle" with the virus.

As Trump was speaking excitedly about re-opening the US economy, the mayor of Washington was a few blocks away announcing the indefinite closure of all non-essential businesses in the national capital.

"We have virtually shut down economic activity in our city," she said.

The previous day the Republican Governor of Indian issued an order for his state's resident's to stay at home.

"I’m telling you, the next two weeks are critical," he said.

Almost half of all Americans – approximately 160 million people – are now under some form of stay-at-home order.

Even if he would like to, Trump cannot simply click his fingers and "re-open" the US economy by Easter. The federal government has only issued social distancing recommendations. All the important restrictions on commerce and social activity have been implemented by state governors and mayors.

As the President rules the airwaves, they are the ones making the big decisions. Life will go back to normal when they want it to.