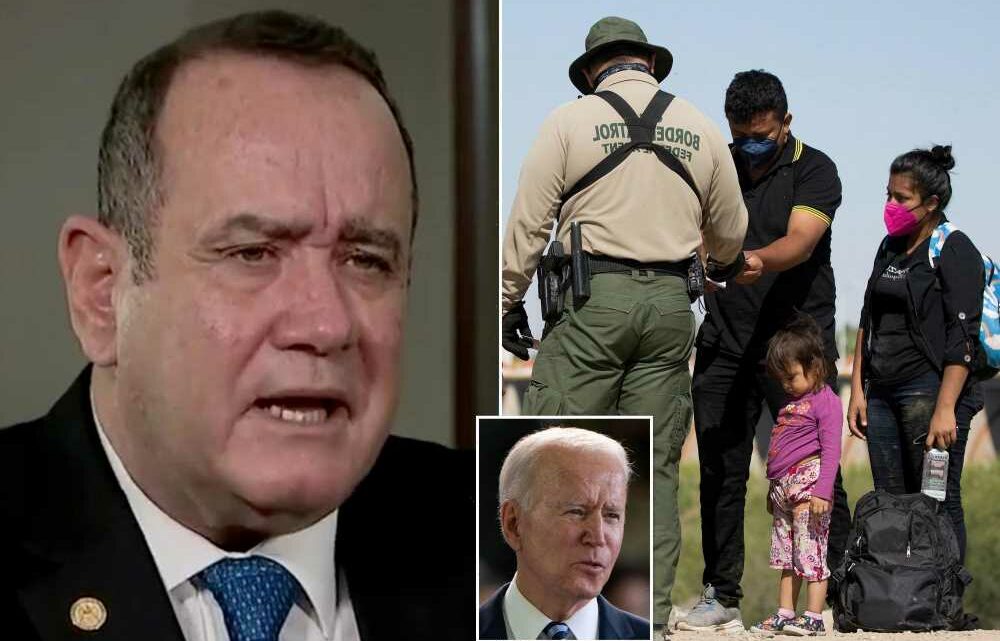 The president of Guatemala says he places blame for the US’ border crisis on Biden and the Democrats’ “lukewarm” rhetoric on illegal immigration — adding that he urged Vice President Harris during their meeting to impose harsher penalties on human smuggling.

President Alejandro Giammattei made the comments in an interview Wednesday with Fox News after his summit with Harris, who visited his Central American nation as part of her first foreign visit in office.

“Well, humanitarian messages were used here by the coyotes in a distorted manner because what they said over there was that they will promote family reunification,” Giammattei began by explaining, appearing to refer to Biden’s messaging on immigration during the campaign.

“So the coyotes came and took the children and the teenagers to the United States and the borders were full, not only with people from Guatemala, but with a lot of people from all over,” he continued, “Which is why our proposal is that messages should be clear.”

“The vice president sent a clear message yesterday of ‘do not come because we will not let you in.’ That’s a clear message — but if you have a lukewarm message, it only creates the opportunity to misinterpret.”

“I want to be clear to folks in this region who are thinking about making that dangerous trek to the United States-Mexico border: Do not come, do not come,” Harris said Monday at a press conference with Giammattei.

“The United States will continue to enforce our laws, and secure our border. There are legal methods by which migration can and should occur, but we, as one of our priorities, will discourage illegal migration,” she continued, “And I believe if you come to our border, you will be turned back.”

Journalist Sara Carter, who conducted the interview, told network host Sean Hannity that Giammattei told her he wanted bilateral cooperation with the US on immigration-related matters.

Specifically, according to Carter, Giammattei said he suggested to Harris during their Wednesday meeting that the US include stronger federal charges against traffickers and coyotes.

Reps for the White House and Harris specifically did not immediately respond to The Post’s request for comment on Giammattei’s remarks.

The Biden administration’s undoing of former President Donald Trump’s border policies has prompted a flood of Central American and Mexican illegal migrants at the US border, including thousands of unescorted children.

Central Americans looking for refuge from the Northern Triangle countries — Guatemala, El Salvador and Honduras — have taken these policy moves, as well as the overwhelmingly more welcoming tone from Democrats, as a sign that Biden is inviting them to cross the border.

Insisting that the border was not facing a crisis, Homeland Security Secretary Alejandro Mayorkas said in early March that the problems the agency faced should be blamed on the previous administration.

The data, however, overwhelmingly shows that migrants were flooding the border because they believed Biden would welcome them with open arms.

As the crisis heated up, Biden tapped his vice president to address the diplomatic measures related to its “root causes,” however, despite intense pressure, she has still refused to visit the border months later to surveil the situation for herself.

Bitcoin Rebounds Sharply but Unable to Sustain above $40,000 High
Technology