Workplaces will have to overhaul their safety procedures to earn a green light to operate under a new set of social distancing restrictions to be implemented by the Andrews government as Victoria emerges from lockdown.

Premier Daniel Andrews revealed on Monday that a traffic-light system of restrictions would be introduced with the aim of guiding the state out of its devastating second surge of coronavirus infections, in a substantial departure from the current staged method of restrictions. 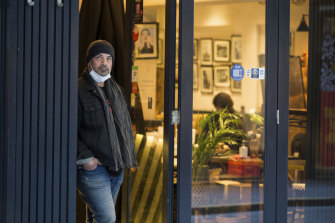 Tony Roussos, owner of The Quarter cafe in Degraves Street, Melbourne, is among the traders eagerly awaiting news on plans to reopen.Credit:Paul Jeffers

He said businesses were uncertain whether customers would feel comfortable reverting to pre-pandemic habits such as sitting in crowded restaurants, but any indication of a way forward would help them prepare.

"I welcome any plan that’s going to give us some degree of certainty so we can start planning for our future," he said.

Victorian Chamber of Commerce and Industry chief executive Paul Guerra, speaking to ABC radio, said any plans for easing restrictions needed to be backed up by the government's health response.

"What are the fail-safe mechanisms that are going to be put in place?" he asked. "We know there are going to be outbreaks, sadly, so how do we deal with that without having to shut down all of industry and, in fact, all of the state?

"We need confidence in the contact tracing system because if that is working then the caseload should be limited by the fact that we’re onto it and onto it quickly."

Another 41 deaths were announced on Monday, but only eight of them occurred within the previous 24 hours, with another 33 cases added to the tally since late July following changes in reporting obligations for aged care services in August.

Three men aged in their 70s, four women in their 70s and one woman aged over 100 were among those newly added to the death toll, now at 565 Victorians.

Meanwhile, the Andrews government has backed down on its proposal to extend state of emergency powers for a further 12 months, and made concessions during its negotiations with crossbench MPs on Monday.

The government is seeking to extend the orders by six months and has agreed to table in Parliament the Chief Health Officer's advice on state of emergency extensions every four weeks.

The number of active coronavirus cases has fallen from almost 7500 to 2620 in the space of two weeks.

The new road map is set to include information on whether Victorians will be allowed visitors in their homes, including people who live on their own. But large groups of people gathering in homes was a "massive contributor" to the second surge, Mr Andrews said.

"If we do this too quick, if we do this chasing something that might be popular for a few weeks, if we forget that it’s a pandemic and think that it’s a popularity contest, then Christmas won’t look normal at all. It will be a very, very different Christmas Day.

"I want to find a COVID normal based on the best medical advice where there will be some rules but where we can lock that in for months."

Epidemiologist Professor Mary-Louise McLaws has been advocating for a traffic-light pandemic response system in Australia, and said under her proposed system fewer than 10 cases a day over two weeks could still be enough to prompt a red alert in Melbourne.

A handful of cases could warrant short lockdowns of smaller regional communities, in a conservative model aimed at preventing the disease spreading beyond the capacity of contact tracers, Professor McLaws said.

"Green" restrictions would be introduced after a metropolitan city recorded up to 59 coronavirus cases in two weeks, triggering measures such as mandatory mask wearing on public transport and only small numbers of people being allowed to each home.

"Amber" restrictions would kick in if there were between 60 and 99 cases over two weeks, prompting further limits on socialising.

"Red" restrictions would be triggered as cases hit 100 or more over the same period, similar to the stage four rules currently in place in Melbourne.

Under Professor McLaws' traffic-light plan, these tough rules would have started on June 18 at the latest, weeks before stage three restrictions were reintroduced across Melbourne and Mitchell Shire on July 7, and she said they may have prevented the worst of the second surge.

"[Melbourne] was already in amber and flicking to red in May and June," she said. "But you don’t wait until it gets to 100 until you act. The best time to act is when you’re in the amber zone so you never had to go to a hard lockdown."

On Monday Mr Frydenberg was highly critical of the Andrews government's handling of the coronavirus pandemic and lack of transparency on plans to emerge from lockdown.

The federal Treasurer accused the Premier of overseeing the "biggest public policy failure by a state government in living memory", in one of his strongest remarks yet against the Victorian Labor government.

"Victorians want to hear a definitive plan from Daniel Andrews about the lifting of stage four restrictions," Mr Frydenberg said in Canberra just before 9am.

"What has transpired in Victoria is like a slow-motion car crash, and you saw the over-reach from the Premier just a few days ago asking for a 12-month extension of emergency powers.

The Premier said he did not have time to argue with Mr Frydenberg and insisted he was focused on battling the pandemic.

"None of us have the luxury to be playing politics with these things, I’m just not going to do that," Mr Andrews said in response to the Treasurer’s comments. "Our nation and our state requires all leaders of all political persuasions to work together … I’m just not interested in having an argument or a fight with anything or anybody other than this wicked coronavirus."

Get our Coronavirus Update newsletter for the day’s crucial developments at a glance, the numbers you need to know and what our readers are saying. Sign up to The Sydney Morning Herald’s newsletter here and The Age’s here.