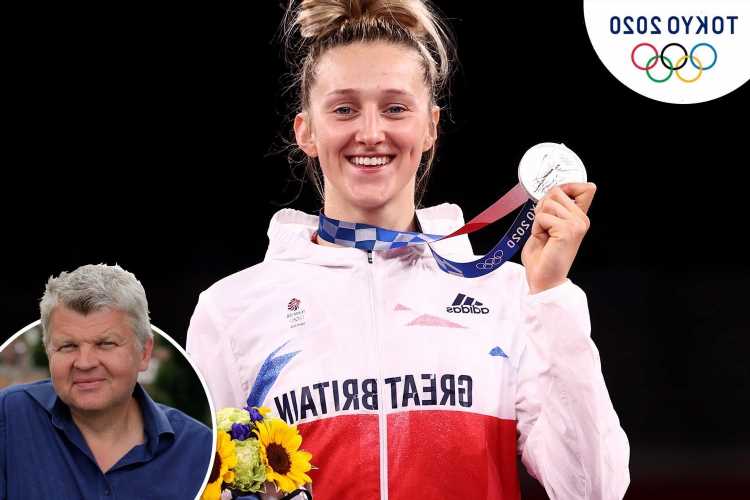 EARLY this century I was filming something in Romania for the BBC. It was a miserable midwinter, with layers of snowfall iced-up and packed tightly underfoot.

The flight back from Bucharest left unpleasantly early in the morning. As we waited at the gate I half noticed dozens of boys and girls sitting around looking as bleary-eyed as me. 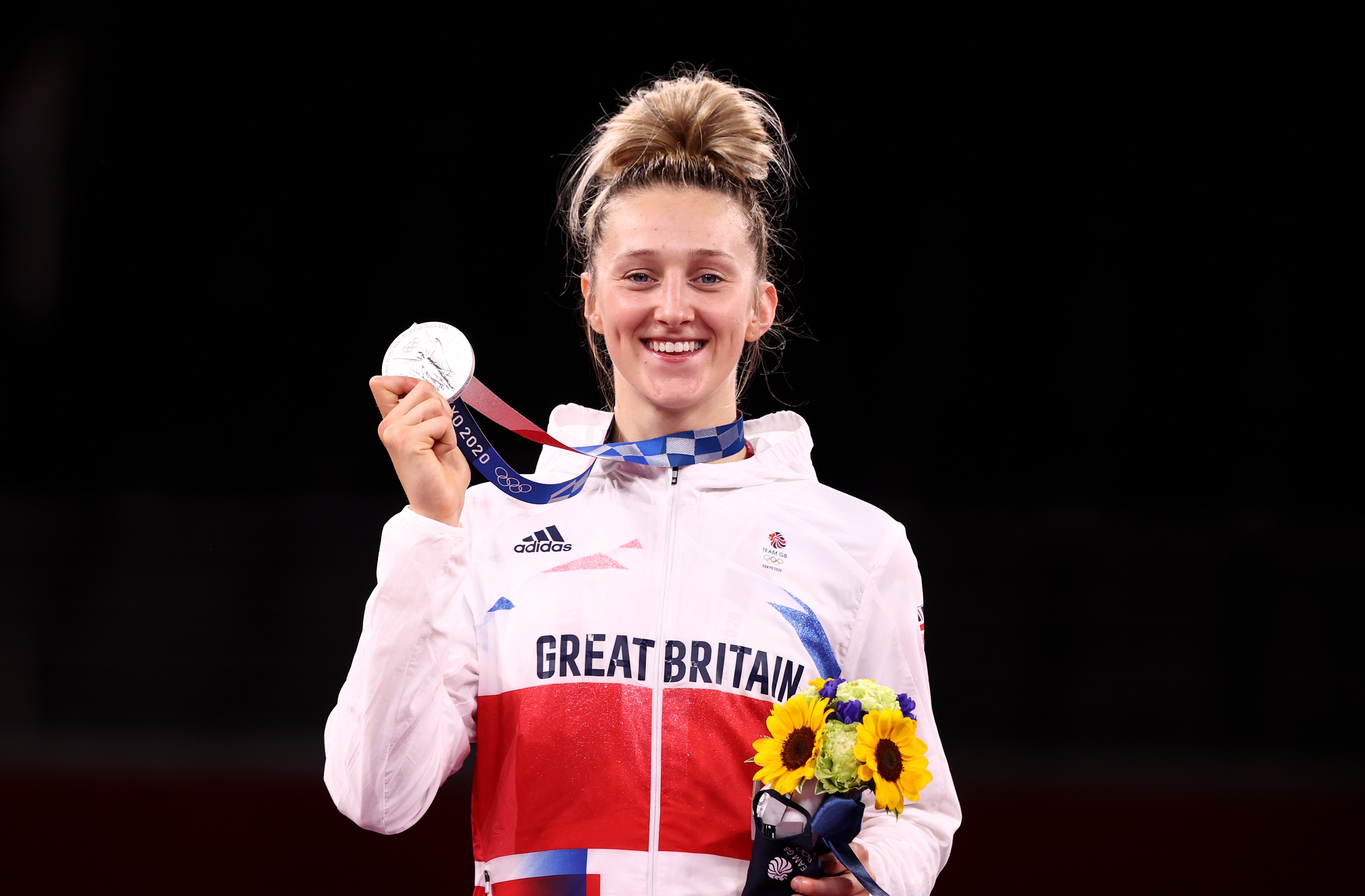 I felt a bit sorry for the poor waifs, the oldest of whom looked to be just about in their teens.

I didn’t give them another thought until towards the end of the flight, when the pilot made an announcement. “A warm welcome aboard,” he said, “to the young British gymnasts we have travelling with us today back from a training camp in Romania. They’re hoping to compete for us in Beijing in 2008.”

A smattering of applause broke out. Those Olympics were still nearly five years away.

As I watched those kids file off that plane at Heathrow, I felt humbled by their dedication and somewhat ashamed of all the times I’d idly watched the gymnastics at the Olympics, dismissed some poor British nipper as another no-hoper and not given them another thought.

I was lucky enough to cover the Beijing Olympics and made a point of going to see the gymnastics. There were only nine in our team, so most of the kids on that flight never made it. Those who did managed only one bronze medal between them, but bless them all.

That encounter on the flight from Romania changed the Olympics for me for ever. I realised that everyone competing, of all nations and in some cases none, had devoted their lives to getting there.

So now, with that knowledge weighing heavily on my mind, I find every Olympic contest almost unbearably meaningful.

For example, Lauren Williams in the final of the Taekwondo. I spoke to Lauren a couple of months ago. She told me how she’d had to move from her home in Blackwood, in the valleys of South Wales, to train in Manchester.

So now, with that knowledge weighing heavily on my mind, I find every Olympic contest almost unbearably meaningful.

As she was too young to live in the athletes’ accommodation, her mum had to give up her job and move north, and they lived together in a caravan near Rochdale.

All so she could have the best chance of fulfilling her dream of getting to the Olympics. She lost the fight, in the final seconds, to win silver.

This on the same day that a leading figure in British public life, Piers Morgan, suggested coming second didn’t mean that much. I’d award Piers a gold medal for all sorts of things, but for that particularly tweet he doesn’t get a place on my podium.

Staying with the Taekwondo, Bradly Sinden had a back story featuring similar levels of commitment and parental devotion.

Twice a week, through his teens, his mum would take him from Doncaster to Manchester for training.

What a gruelling drive that is! And twice a week! She gets a gold medal from me for that, which will be of no consolation to her boy, who was every bit as gutted with his silver as Piers Morgan would have wanted him to be.

As for our golds, no one in their right mind would begrudge Tom Pidcock his in the mountain biking. In May he was hit by a car while out training and broke his collarbone.

In the same month, as it happens, I slipped in the bath and cracked a couple of ribs. But I, like Tom, showed true grit in getting myself back in shape for the Olympics. 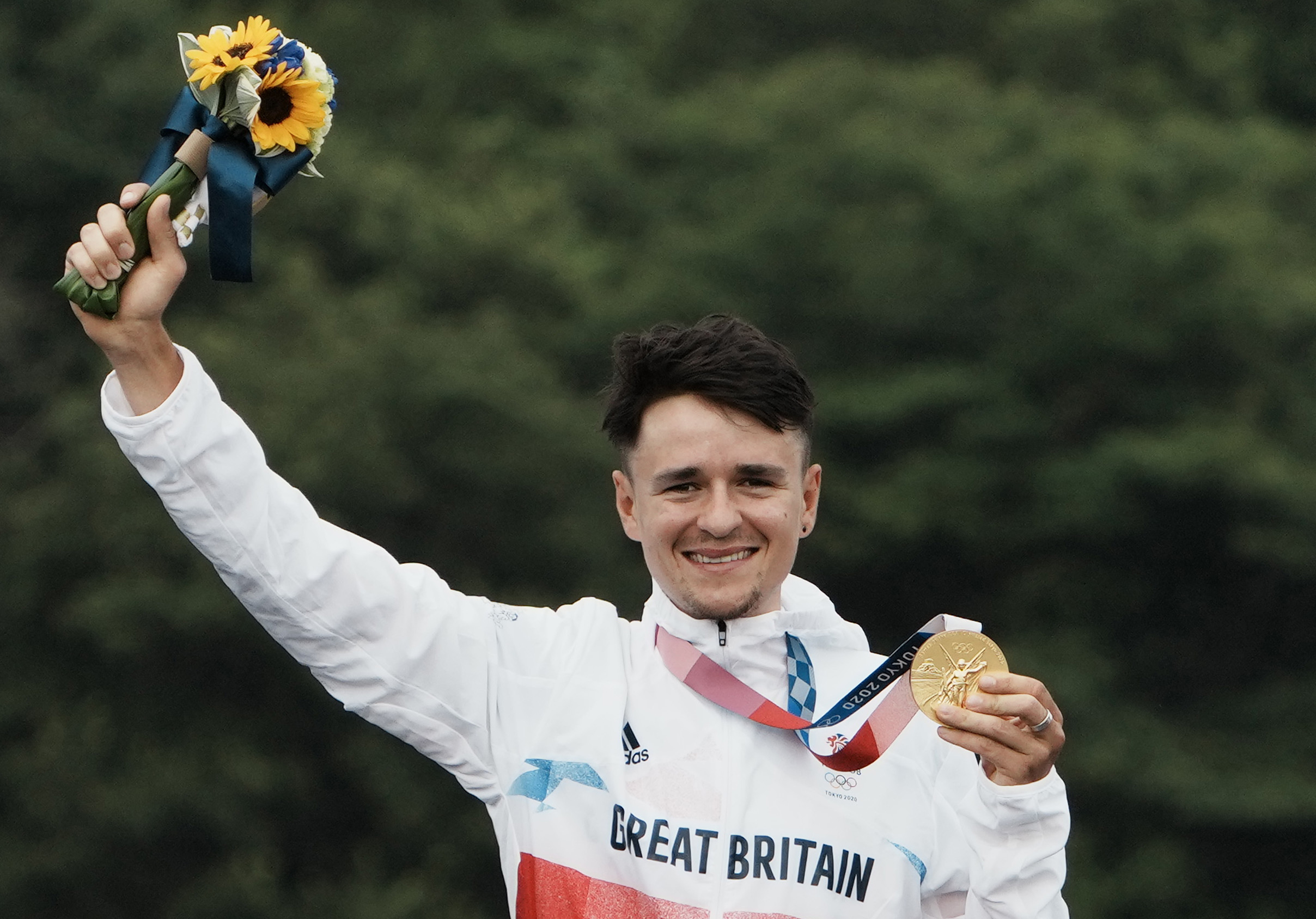 BETTING SPECIAL – CLAIM £180 IN FREE BETS FOR THE OLYMPICS

OK, I was only watching, but I think I may have set my recovery back a couple of months by roaring him on over the line with such vigour.

Adam Peaty, a statue of whom must surely soon be commissioned by his home town of Uttoxeter, was nailed on for gold and so it turned out. What work he must have put in to turn out so good.

And once again we must salute his family. As any parent of a promising swimmer will tell you, it’s a uniquely grim experience for mums and dads, featuring grotesquely early mornings and endless hanging around at swimming galas, in sticky heat and cacophonous noise, waiting for their offspring’s turn to shine.

The more I think about it, the more I feel sure that after each medal ceremony there should be a second one for the parents to be awarded theirs.

And finally, Tom Daley. Where have the years gone? One minute he’s a miracle infant throwing himself in the water from frightening heights, the next he’s a veteran of four Olympic Games.

The more I think about it, the more I feel sure that after each medal ceremony there should be a second one for the parents to be awarded theirs.

But, praise be, he finally did it. And how the tears of joy on the podium trickled down from his eyes towards his mask. 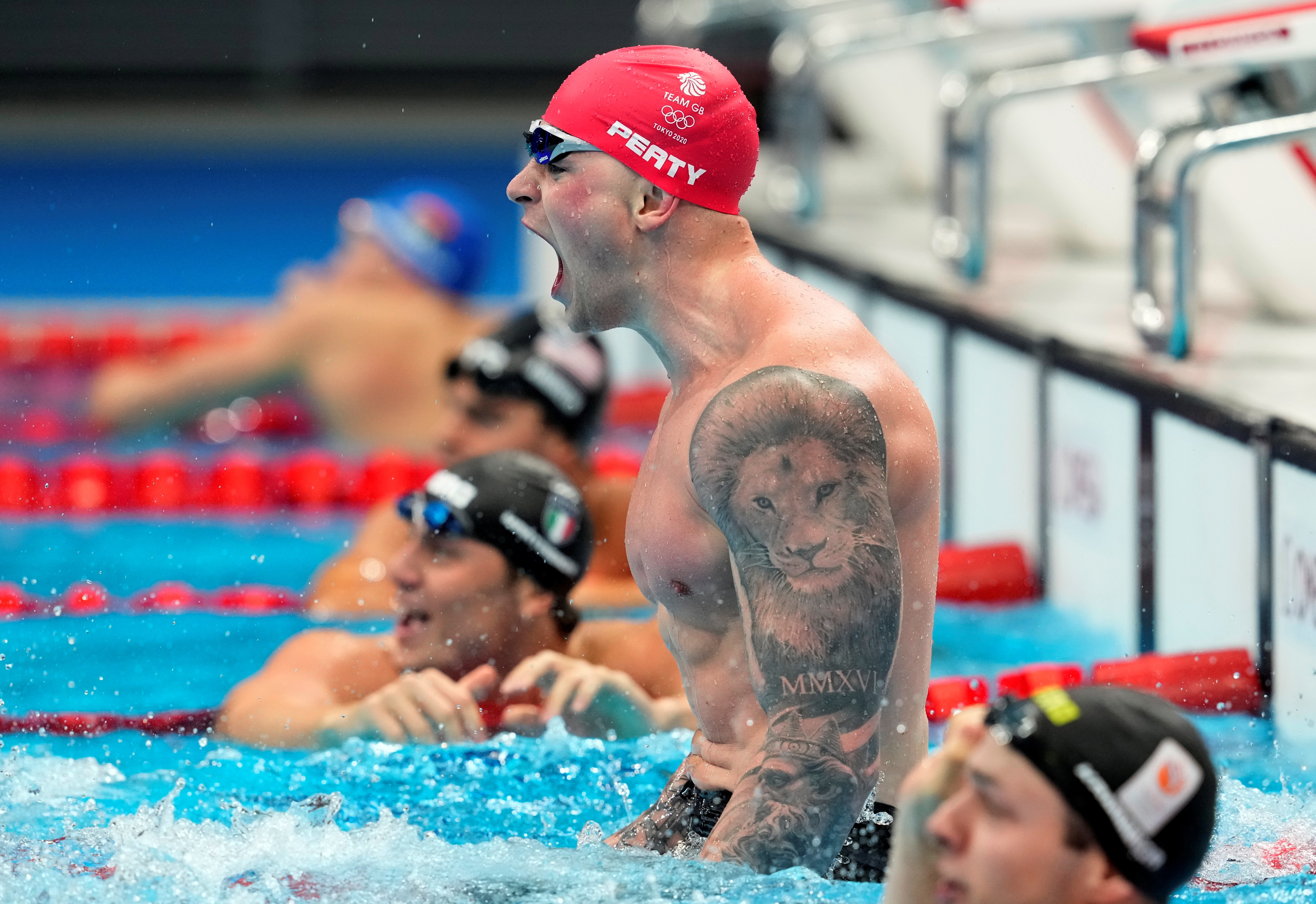 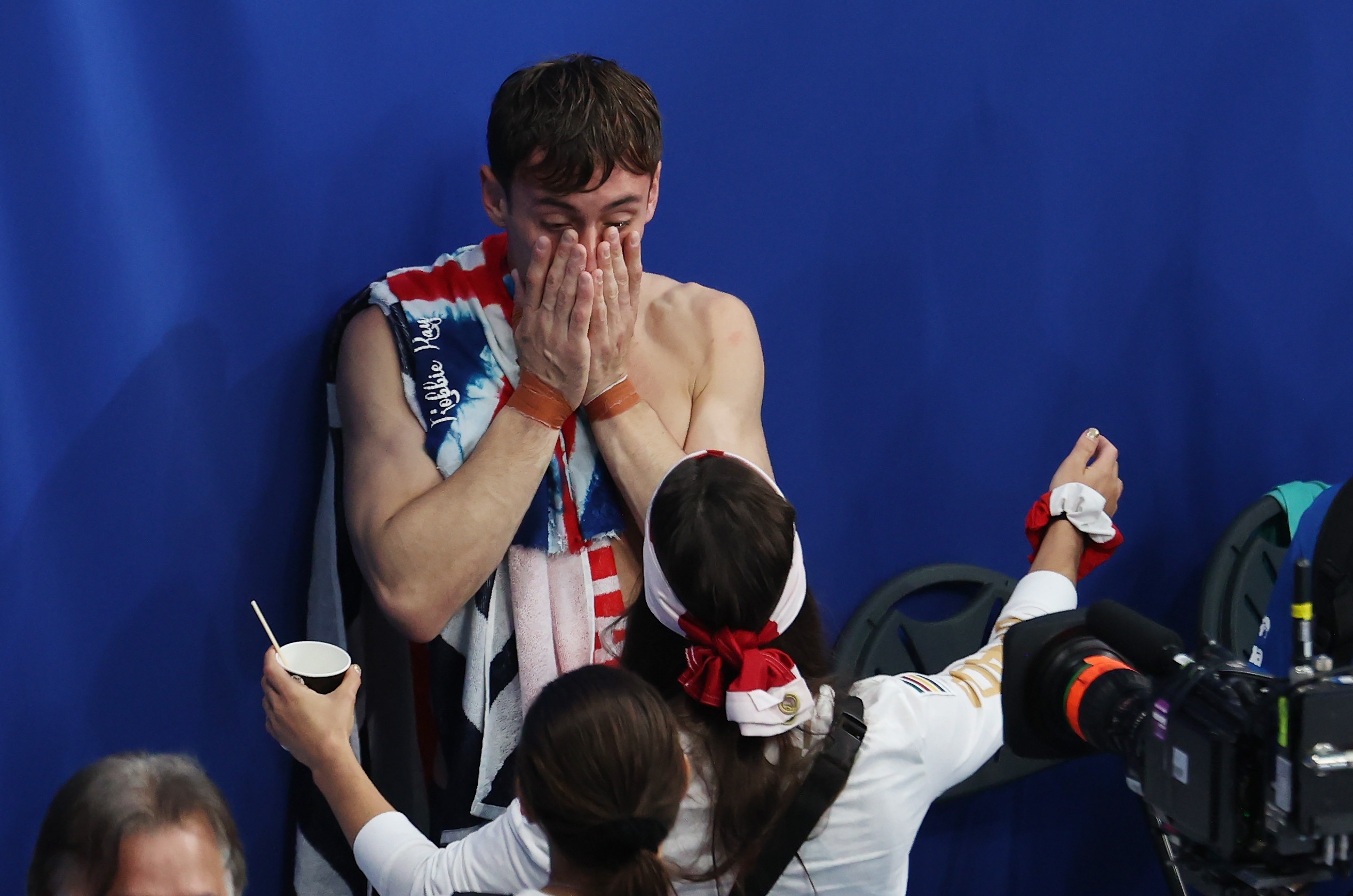 IT’S been a thrilling few days for everyone who takes skateboarding seriously as it made its debut as an Olympic sport.

Spare a thought, then, for the Peruvian boarder Angelo Caro who, competing on the first day of his sport’s new dawn, managed to come off in eye-watering fashion. 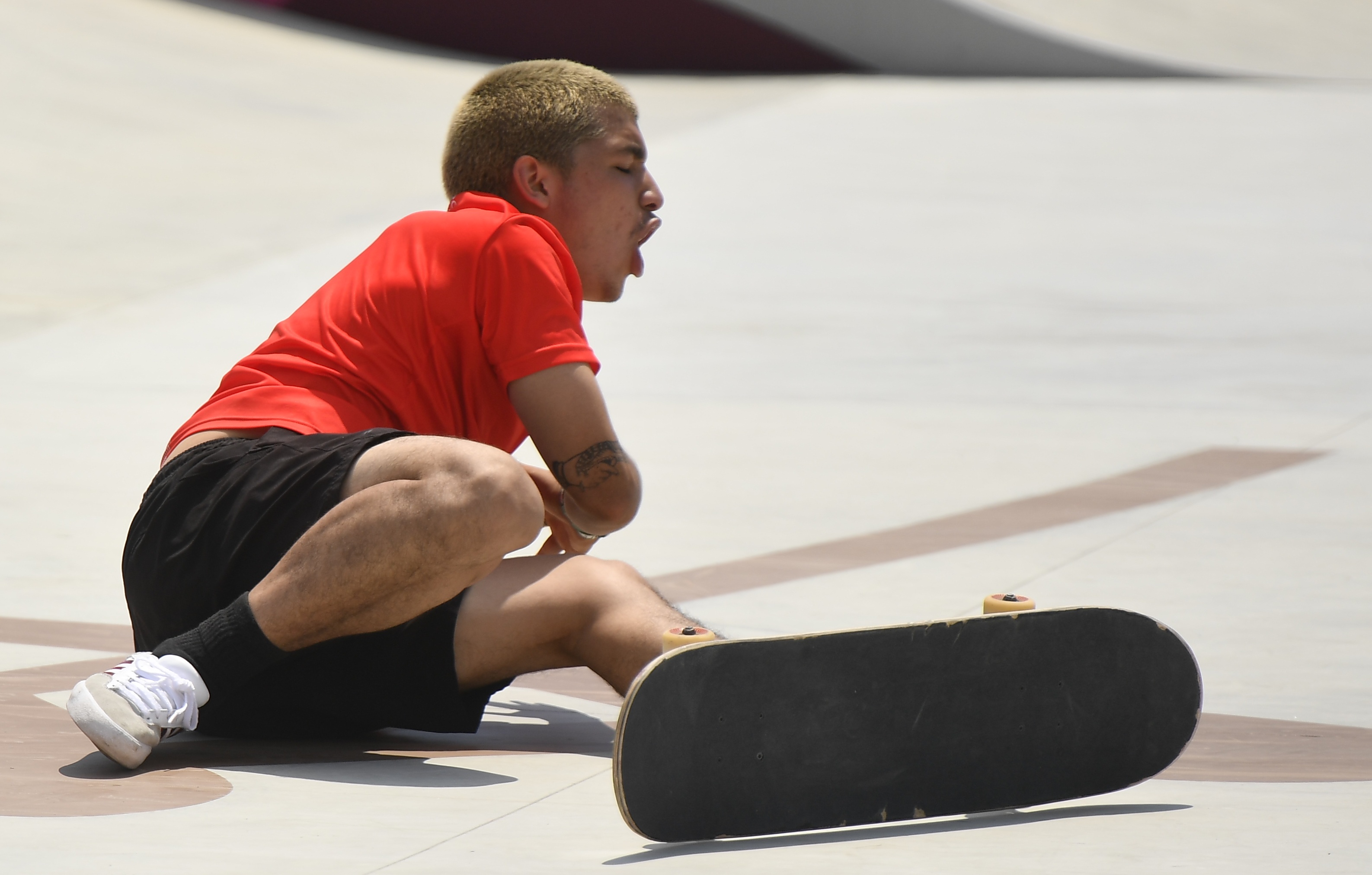 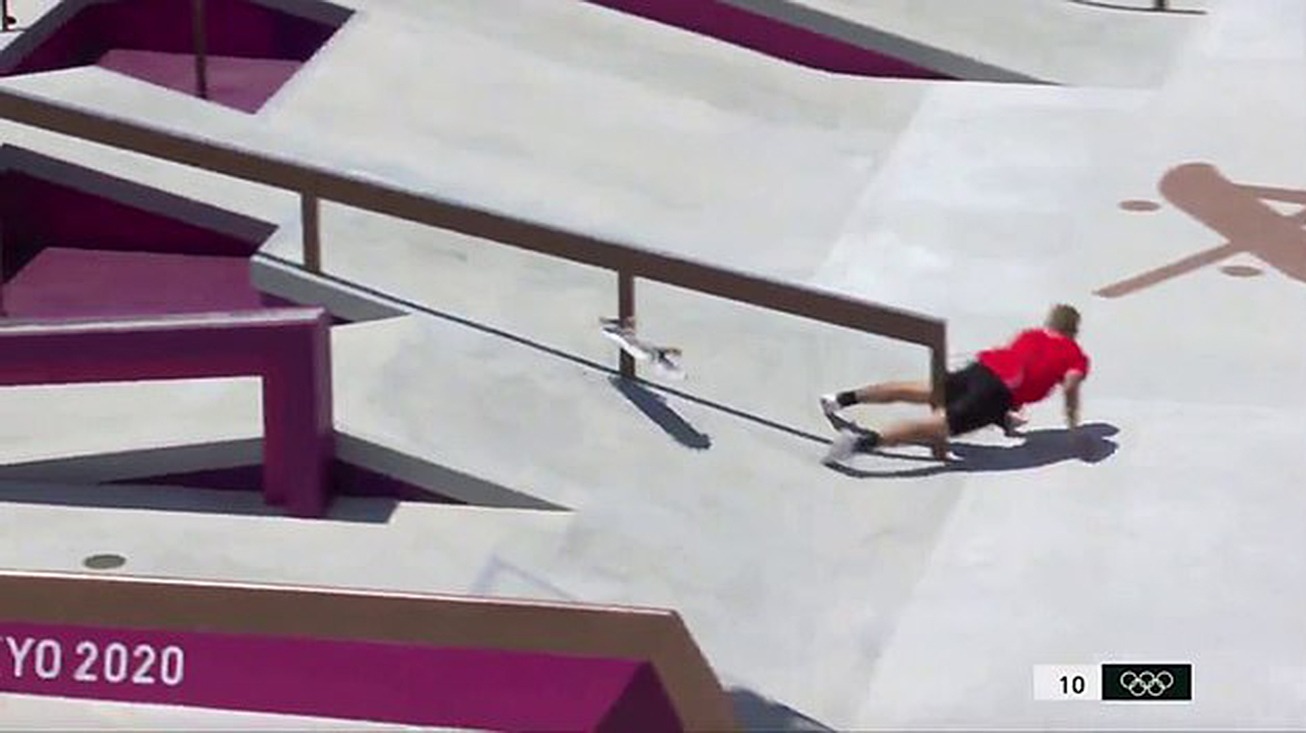 At high speed, he flew horizontally, legs apart, into a metal post.

As he did so, the eyes watered of all 3.85billion males on God’s green earth. Even my dog looked alarmed, giving his dang-lies a quick lick to check they were still there. 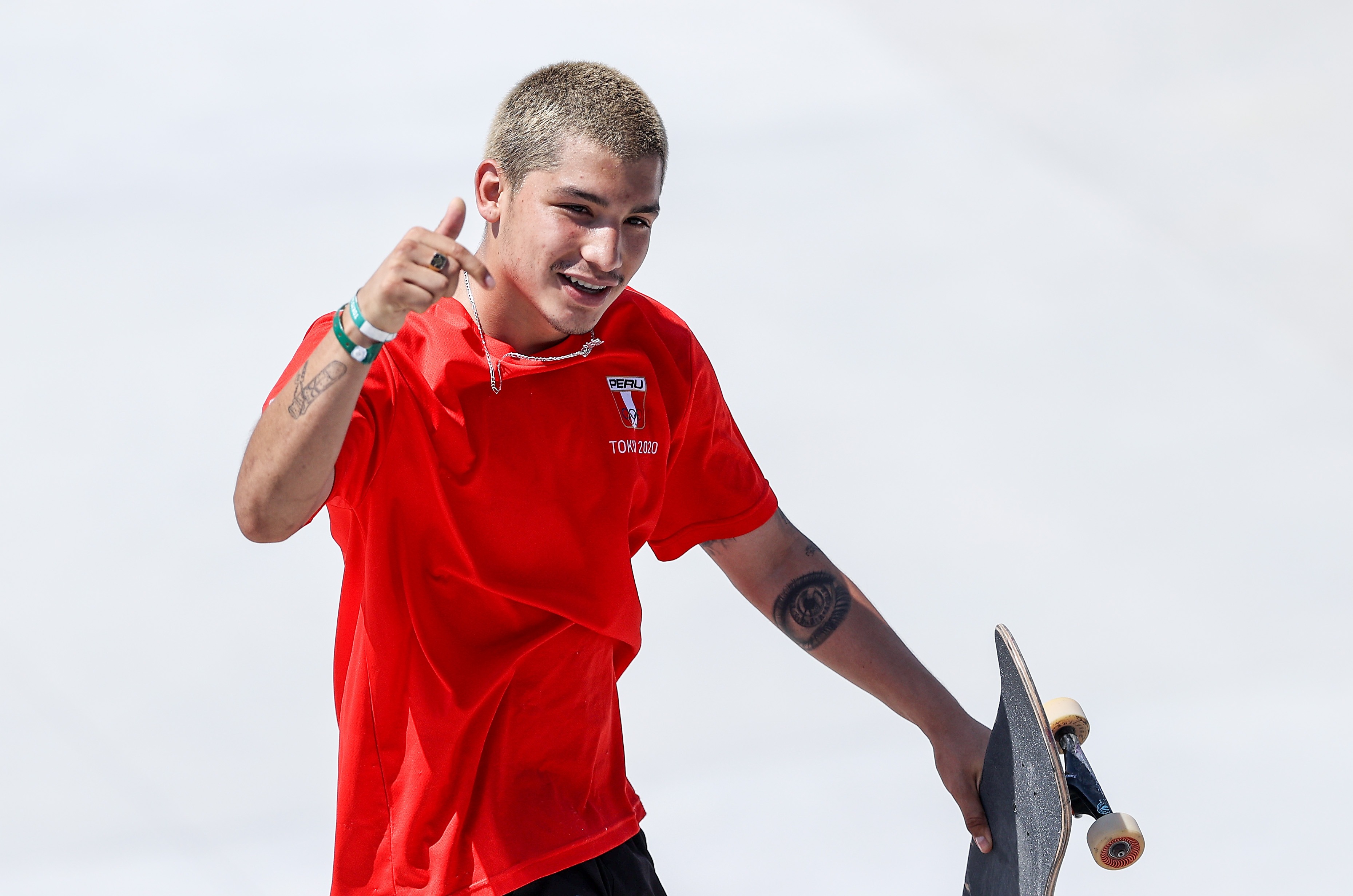 KATE SHEMIRANI, hysterical antivaxxer and all-round conspiracy theorist, is a bit of a worry.

This ex-nurse is claiming she believes the vaccines are part of a CIA plot to destroy half of mankind. 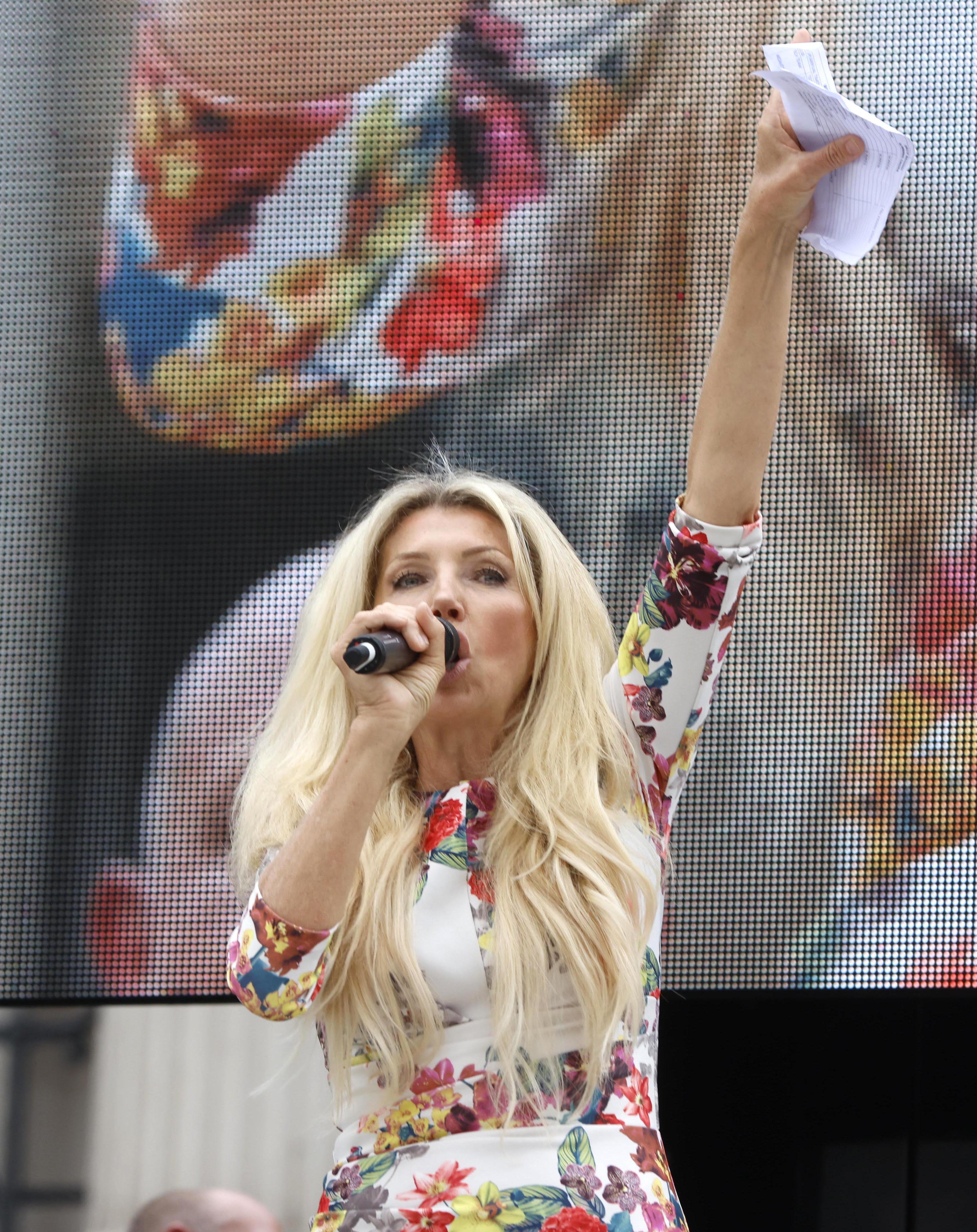 Rather like an Olympic long jumper beating her world record first leap with another world record on her second jump, nightmare nurse Shemirani then made certain of the gold medal for idiocy by suggesting that clinicians involved with the Covid vaccines should be treated like Nazi war criminals.

As a keen amateur psychologist, I diagnosed in her an indecent amount of self-interest and a desire to be the centre of attention.

And then up popped her son today to tell us: “She’s someone with a massive amount of self-interest and loves being the centre of attention.”

How must it feel to have your own son put you away like that?

I’m sure she was delighted, actually, for another few precious moments she was in the news again. Attention-seekers are like that.

POOR Lilibet Diana Mountbatten-Windsor. I wouldn’t be in her shoes.

Eighth in line to the throne is nowhere near the top job but somehow still uncomfortably close to it. 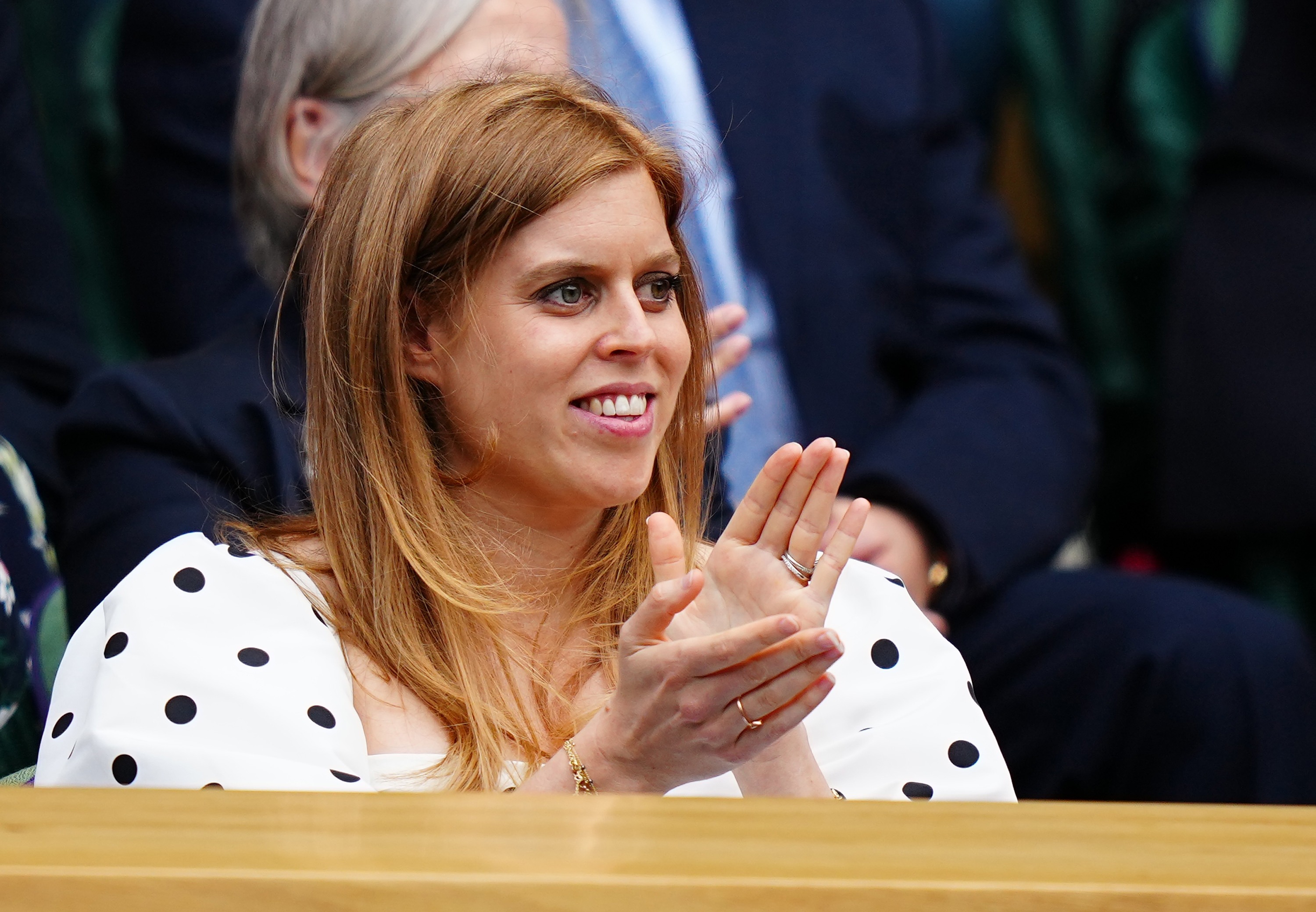 A bit like a fourth-choice goalkeeper who’s unlikely to be called upon in a game, but still has to be ready to do so.

Little Lilibet is the Aaron Ramsdale of the royal succession business.

I think you need to be no higher than tenth to really enjoy your status.

Wearing the No10 shirt presently, having been pushed down from ninth by Lilibet, is Princess Beatrice, aka Mrs Edoardo Mapelli Mozzi. I bet she’ll sleep more easily tonight.

BEEB'S IN THE ROUGH

THE BBC, not for the first time since I started there on work experience in 1992, is in what golf commentators call an unplayable lie.

If it had paid the necessary hundreds of millions to secure comprehensive live television coverage of the Olympics, there would be a stink about overspending. 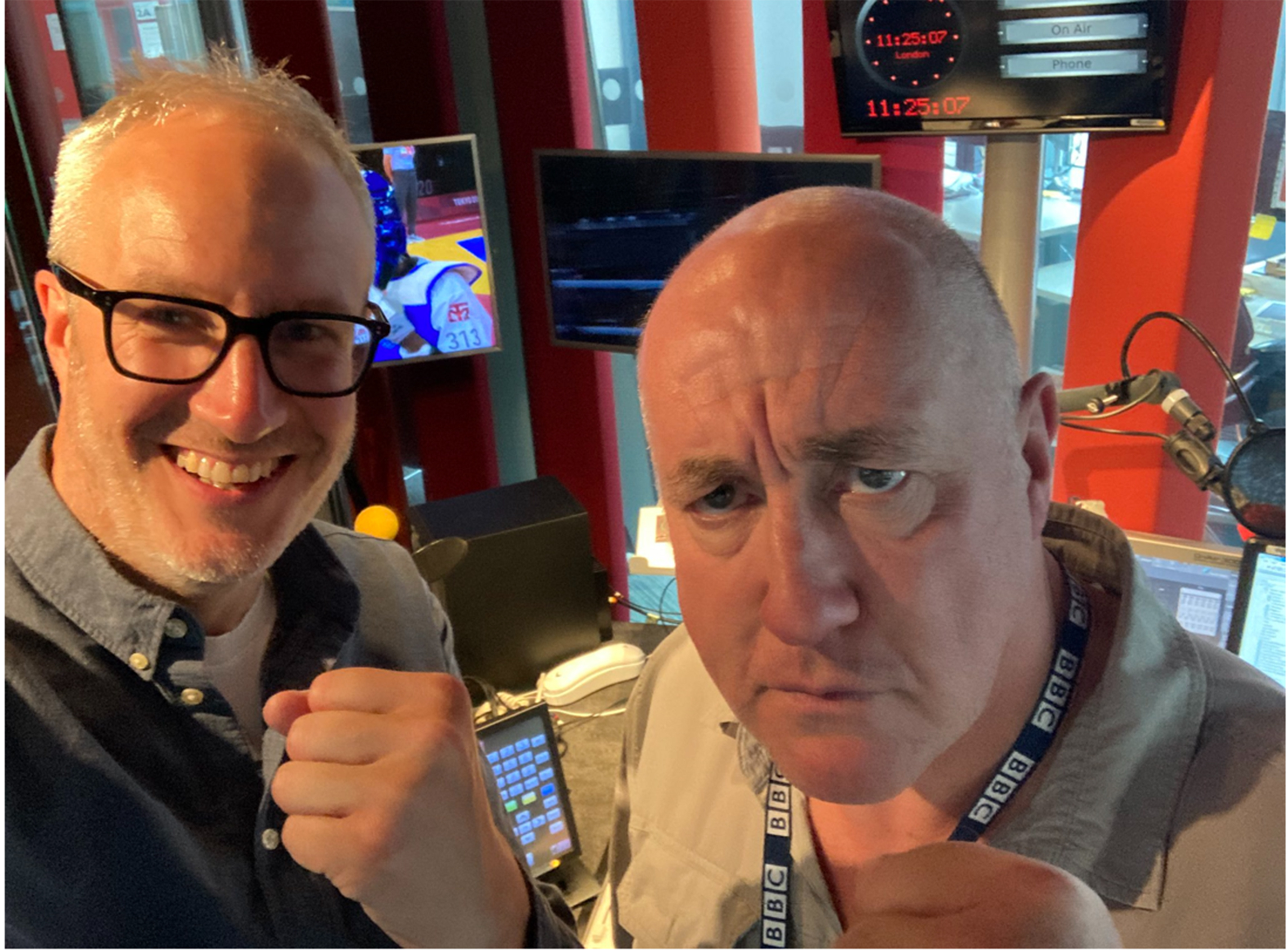 As it stands, it’s getting it in the neck for doing the best with what TV rights it does have.

Beyond that, as a proud broadcaster on the BBC, I can hardly pass further credible comment.

However, I will nevertheless point out that the radio coverage, on 5 Live, is comprehensive and live. And completely brilliant. The commentators are simply wonderful, all of them.

Go on, listen to, say, Jonathan Overend and Steve Bunce commentating on boxing, taekwondo or anything else they turn their hands to, and then tell me it could have been any better if you’d seen it on the box instead.

ARE little local sports shops going to die out completely? The big ones – the chains – are hopeless, soulless places.

I chanced upon an old-school shop the other day. I wandered in with nothing in particular to buy – I just wanted to be reminded of what these places feel like. I loved them so much as a kid.

The few you come across now, reassuringly, are the same as they always were – small, but well stocked with a bewildering range of stuff from table tennis bats to cricket helmets to hockey balls to gumshields.

And there’s always someone in charge who was really good at a sport or two and still knows a little about all of them.

But it was the smell that really got me – a heady blend of rubber, fabric, newness and general excitement. For the good of all games, bring back the local sports shop.

Bitcoin price: Why is Bitcoin going up? Will Amazon accept BTC by 2022?