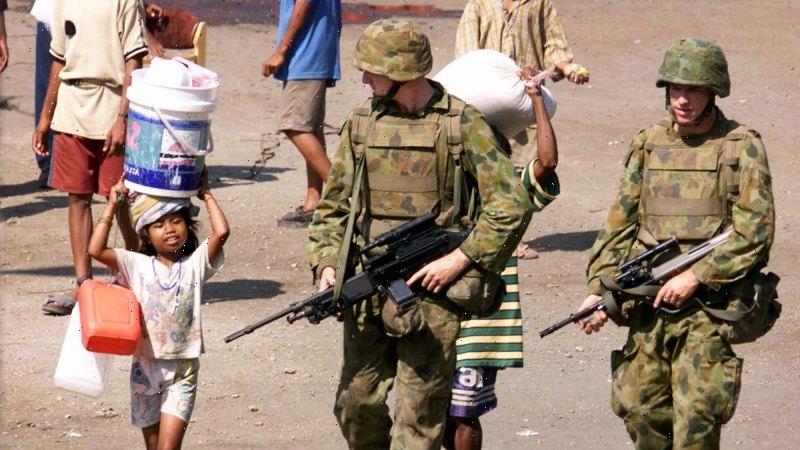 Troops get a grip on Dili

In hostile territory, but not a shot fired in anger

Dili, Monday – The thugs disappeared quickly from Dili’s streets. When the first Australian soldiers arrived today in full combat dress, their rifles at the ready, the militiamen pretended they were the very refugees they had terrorised for weeks. 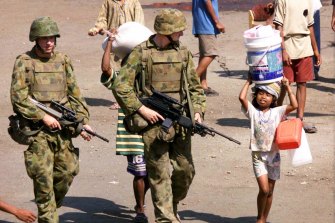 Australian peacekeeping soldiers keep a watch as East Timorese refugees are moved from Dili Airport to the safe haven of the stadium in Dili.Credit:AP Pool

Some of the killers, rapists and looters walked in small groups along debris-strewn streets waving at the Australians who began arriving shortly after dawn in huge cargo planes from Townsville and Darwin in what will probably become Australia’s most significant military operation since World War II.

But the militia no longer carried the rifles given to them by the Indonesian armed forces or brandished their machetes, knives or home-made pistols. A couple were confronted by heavily armed New Zealand soldiers on Dili’s docks but handed over their pistols without argument.

“They are basically cowards,” said Irish journalist Robert Carroll, who has spent the past nine days hiding in Dili and the town’s surrounding mountains. “They ran away when real soldiers arrived.”

The night before, the militia had emptied their rifles into the air as they had every night since the United Nations announced that 78.5 per cent of eligible East Timorese rejected Indonesia’s rule and voted to become the world’s newest independent state. They set alight or trashed the few buildings still habitable in the town, from which 70,000 people have fled.

But as hundreds of foreign troops arrived, tense and ready for action, the bullies disappeared and the fires were burning themselves out. 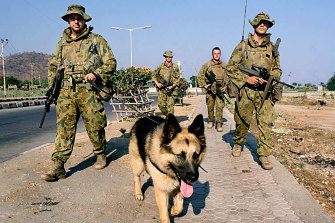 Major Chip Henriss-Anderssen, of Townsville’s Third Brigade, said when he arrived this morning on Dili’s wharf that genuine refugees appeared frightened and remained in small groups.

“But after a while they came up, one or two at a time, and shook our hands,” he said. “The little kids were saying, ‘Hey mister!’ Perhaps after a while we will be able to teach them to say ‘G’day’.”

The scene at Dili’s airport today was surreal. Shortly after dawn, crack Special Air Service troops based in Perth were among the first Australians to arrive in screaming Hercules planes. They ran across the dusty tarmac, securing the perimeter. But waiting and watching were a few dozen Indonesian soldiers, representatives of a humiliated, embittered force that is leaving East Timor in disgrace.

Indonesia has never in its history suffered so great a humiliation: the world’s fourth most populous nation, rejected by people who had suffered 24 years of repression, most of whom are now homeless and still living in terror.

The few dozen Indonesian soldiers who stayed around to watch wave after wave of soldiers arrive didn’t seem too fussed. Asked about the destruction and looting, one said: “This incident happened before we arrived.” He declined further comment.

Major-General Peter Cosgrove, the Australian commander of the multinational peacekeeping force, described the reception his soldiers received as “benign”.

“We have had a cordial reception from the TNI (Indonesian armed forces),” General Cosgrove said.

Nobody mentioned the fact that it was the Indonesian armed forces who through their proxy militias have destroyed most of what Indonesia claimed was its 27th province, and stood by and watched mass killings and almost unbelievable atrocities.

General Cosgrove was not underestimating the risks as more than 1000 of his troops sat under the few trees with shade at the airport. “It is still, from my point of view, a very risky environment beyond the sight of the nearest Australian soldier,” he said.

I was among a group of 40 journalists who were ordered not to leave the airport after we arrived from Darwin in a crammed Hercules.

The first soldiers who went into the now wrecked departure lounge found the place smeared with excrement. Red and white banners, the colours of Indonesia’s flag, still hang outside the airport’s VIP lounge, one of the few buildings in Dili not wrecked.

Tonight we will be escorted under armed guard to the Turismo, the waterfront hotel from which many of us fled in fear of our lives. The place is trashed but we will set up a makeshift camp in the mosquito-infested garden where only a couple of weeks ago Australia’s former Deputy Prime Minister, Mr Tim Fischer, and an Australian delegation of ballot observers sat and enjoyed cold beers and talked confidently of the birth of a new nation.

There is some good news, though. The UN compound where we spent six long and scared days before being evacuated has not been burnt and much of the UN’s equipment is untouched.

But a UN official who has been staying at the fortified Australian consulate, not far from the airport, said: “It’s a pretty horrific picture, overall. There are thousands of people dying up in the hills without food or water. They need urgent help. There is nothing left in the town for people to return to.”

Robert Carroll, the Irish journalist, said he has seen young children with bloated stomachs and families with nothing to eat but small portions of rice. “People have been told the peacekeepers are coming but they don’t believe anything any more,” he said.