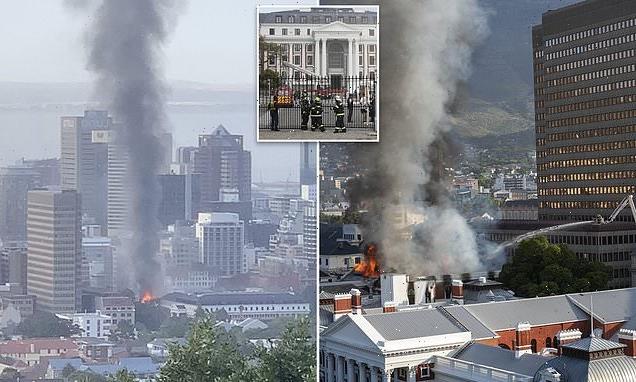 Plumes of smoke rose into the air after a major fire broke out at South Africa’s Houses of Parliament in Cape Town today.

Firefighters rushed to the scene as large flames tore through the building and a huge column of smoke was seen rising into the sky at around 3am.

The blaze started in the early hours of the morning in the third floor offices before spreading to the National Assembly chamber, City of Cape Town Fire and Rescue Service spokesman Jermaine Carelse told local media.

No one has been injured and firefighters remain at the scene.

The cause of the fire has not yet been confirmed by police. 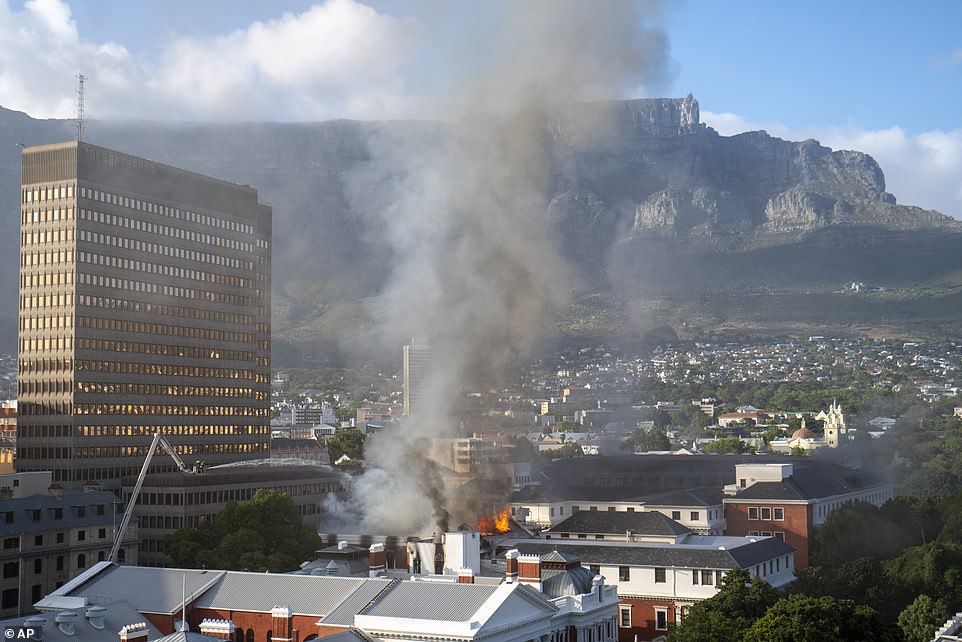 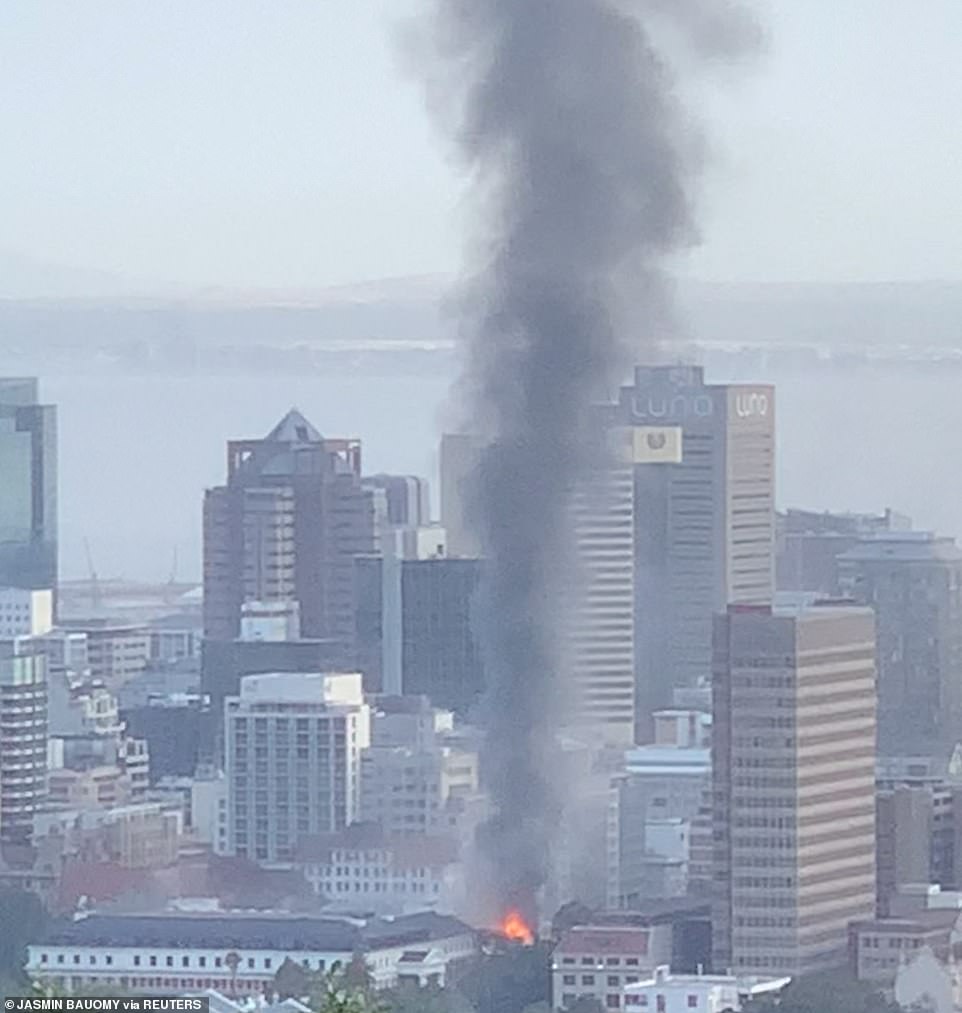 Black smoke and flames were seen rising into the sky after the blaze, which started in the early hours of the morning in the third floor offices, tore through the building 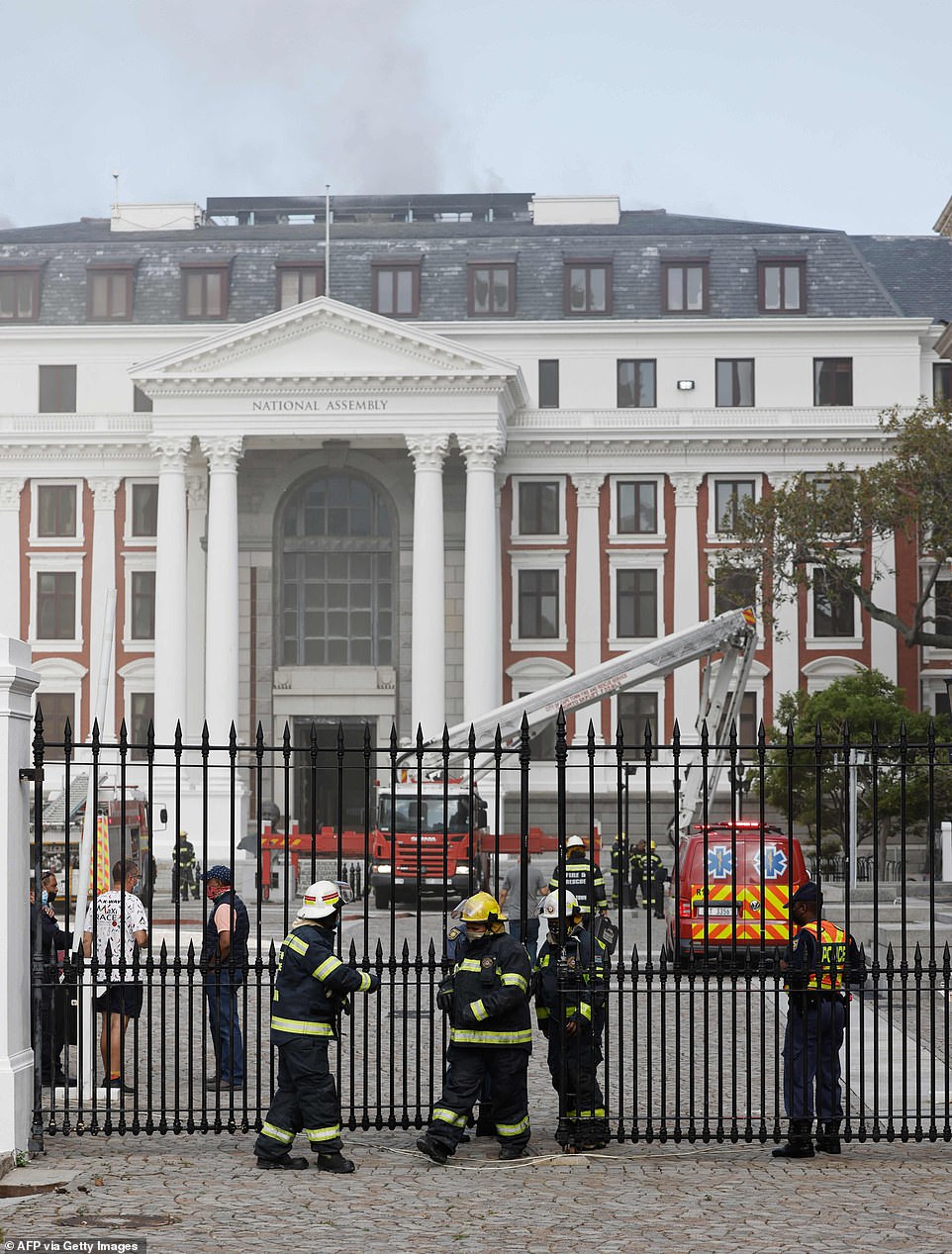 A spokesperson for the city’s emergency services said: ‘The roof has caught fire and the National Assembly building is also on fire.

‘The fire is not under control and cracks in the walls of the building have been reported.’

‘Fire Service have the situation under control,’ she added.

Today, images showed a mass of flames ripping through what appeared to be the roof of the building.

A giant crane was also used by firefighters to spray water over the burning building as they tackled the ferocious blaze.

The Houses of Parliament in Cape Town consist of three sections, including the original and oldest building that was completed in 1884.

The newer additions  – constructed in the 1920s and 1980s – house the National Assembly.

In April last year, a fire ravaged part of The University of Cape Town’s library housing a unique collection of African archives. 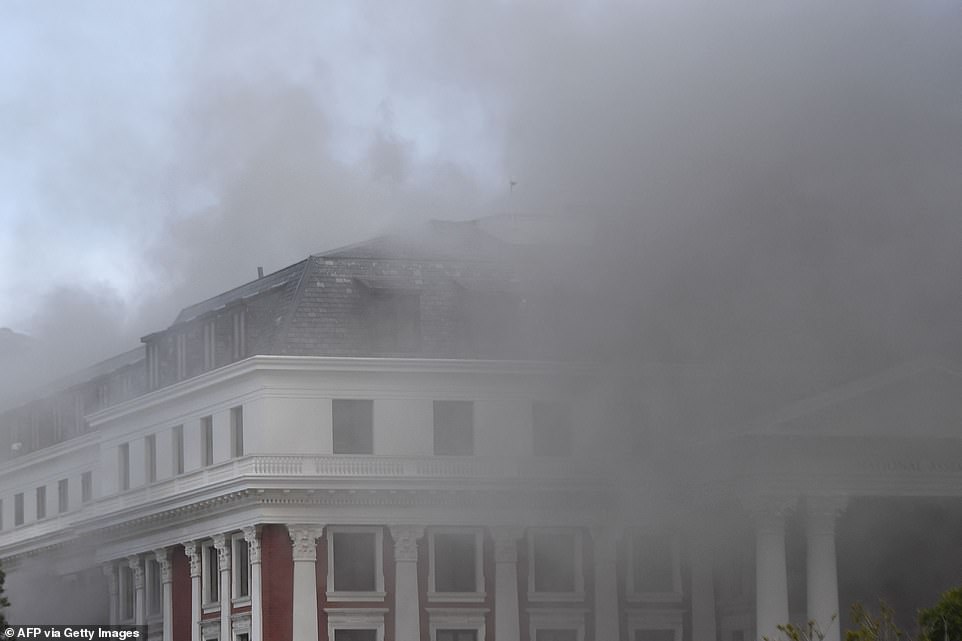 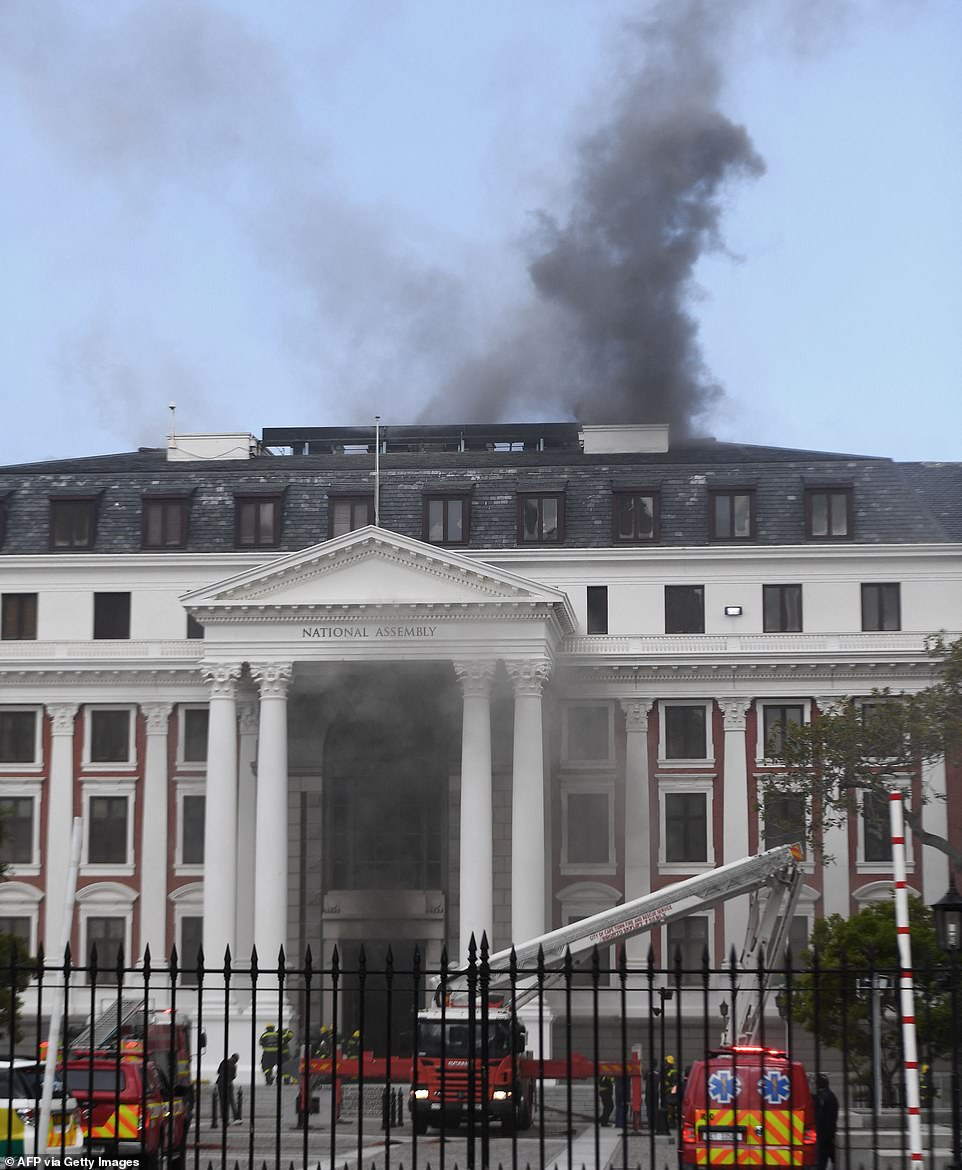 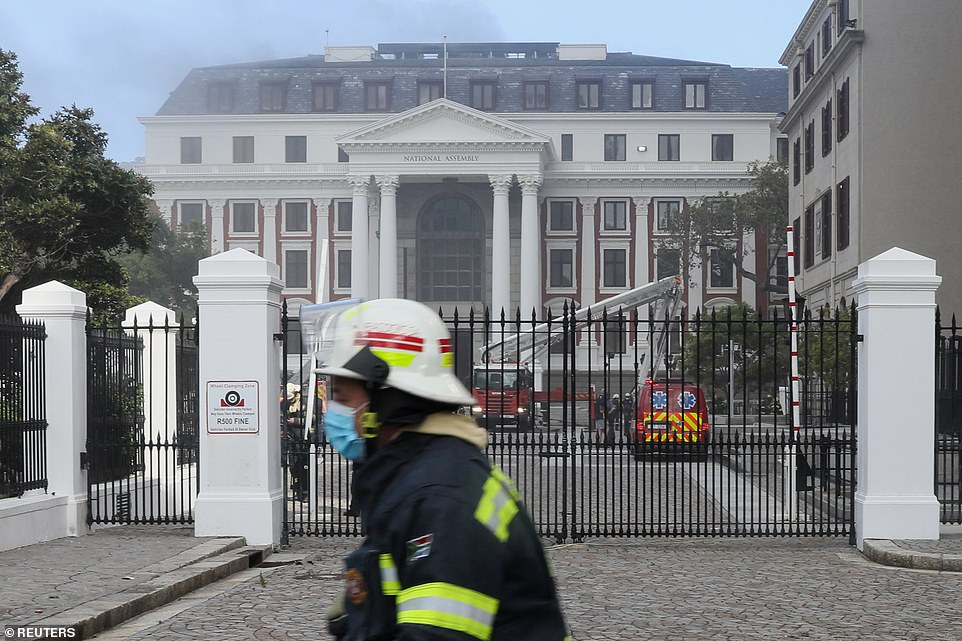 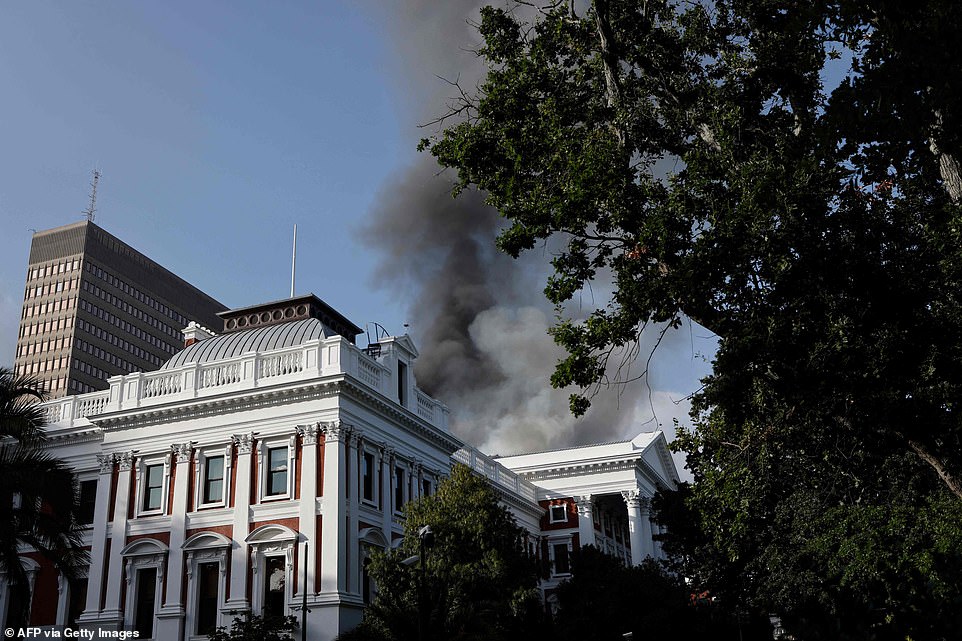 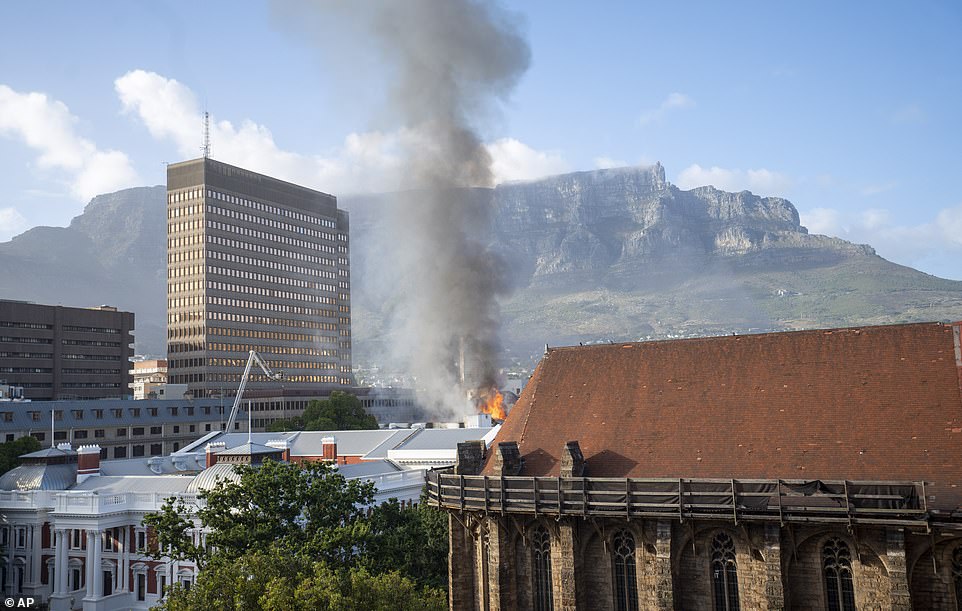 The scenes come just a day after Archbishop Desmond Tutu, who died at the end of last week aged 90, was laid to rest following a touching ceremony at St George’s Cathedral in Cape Town.

A hero of the struggle against apartheid in South Africa, the state funeral for the Nobel Peace Prize winner was held at the cathedral where for years he preached against racial injustice.

Delivering the main eulogy, President Cyril Ramaphosa lauded the late Archbishop Desmond Tutu as ‘our moral compass and national conscience’ as South Africa bade farewell at a state funeral to a hero of the struggle against apartheid.

He also handed South Africa’s multicoloured flag to Tutu’s widow, Leah – a reminder of her husband’s description of the post-apartheid country as the ‘Rainbow Nation’.

The year for Bitcoin — A 2021 roundup of the flagship crypto