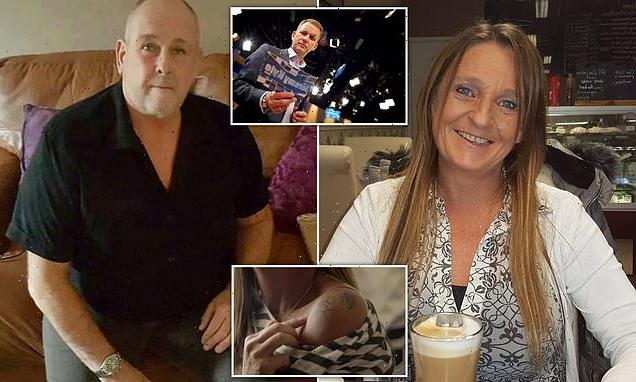 ‘I felt like I had poison on my arm’: Fiancée of Jeremy Kyle guest Steve Dymond who ‘killed himself after failing lie detector test’ COVERS UP tattoo of the presenter’s signature because she feels ‘humiliated’ by ITV show

The fiancée of a man who killed himself after appearing on The Jeremy Kyle Show revealed she has covered up a tattoo of the presenter’s signature from her shoulder.

Jane Callaghan, 52, appeared with partner Steve Dymond on the show in 2019, when he undertook a lie detector test as ‘proof’ he wasn’t being unfaithful.

He was visibly distraught when he failed the test and took his own life before the episode ever got to air.

In a recent documentary ‘Jeremy Kyle: Death on Daytime’, Ms Callaghan described how she got the tattoo to show she didn’t hold the show to blame.

But after seeing the Channel 4 documentary which aired in March, the grandmother-of-five says she was left feeling ‘used’ and ‘humiliated’ after learning about the behaviour of producers behind the scenes, The Mirror reports.

She said: ‘I thought it was all just put on for the cameras, but it wasn’t. I get anxiety, and I get depressed when I see [Kyle] and the tattoo just made me feel as though I had poison in my arm.’

Ms Callaghan even revealed she had rubbed the tattoo with sandpaper in an attempt to get rid of it, explaining it felt ‘dirty’. 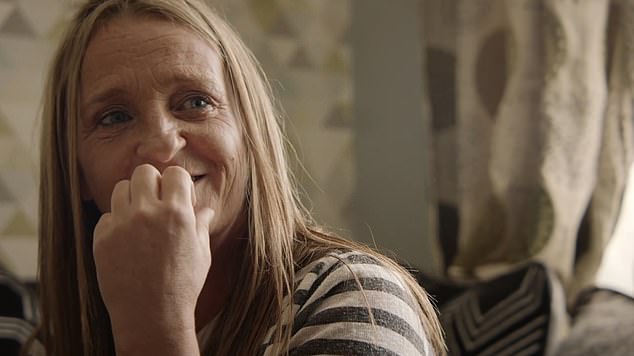 Jane Callaghan told the Channel 4 show ‘Death on Daytime’ that she doesn’t blame Jeremy Kyle for what happened, admitting: ‘I think he’s brilliant. I love him’, admitting she had a tattoo of his signature done after the scandal 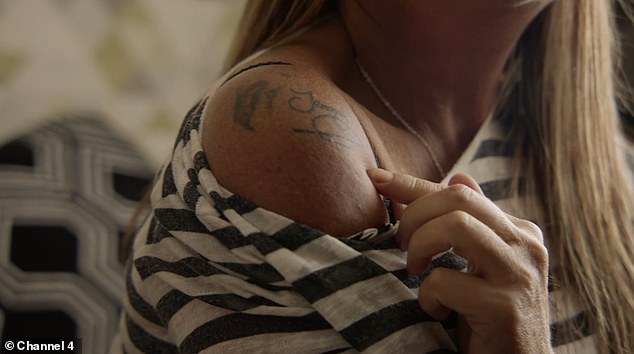 She had Kyle’s signature permanently on her upper arm, saying she can’t blame him when she blames herself for what happened 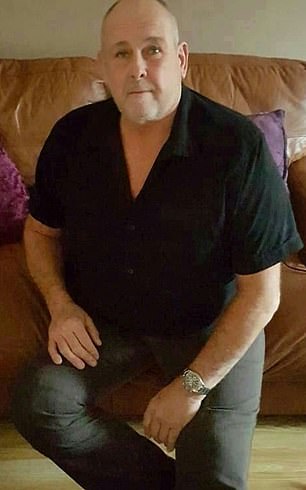 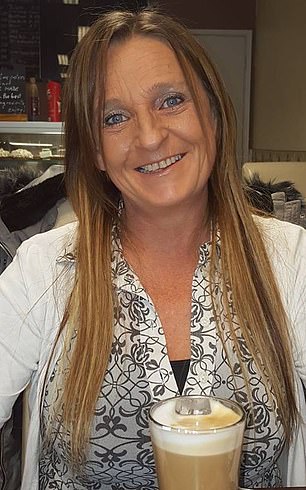 Steve Dymond (left), a guest from Portsmouth, was found dead aged 63 from a suspected morphine overdose after being grilled by Jeremy Kyle on the ITV show in May 2019. The Channel 4 documentary spoke to his fiancée Jane (right)

She has now had the marking covered up with a floral tribute to Mr Dymond.

It includes the words ‘only love can hurt like this’ – lyrics from a Paloma Faith song which her partner used to play for her.

During the documentary, it was revealed that the show’s producers had placed Ms Callaghan into a hotel immediately after Mr Dymond’s death and she expressed sympathy for the workers who had lost their jobs.

She stunned viewers when she showed off her tattoo of Kyle’s signature. She told The Mirror she was later mocked for it after the documentary appeared but is ‘really happy’ with her new replacement.

Ms Callaghan said a crucial moment of the documentary was watching a junior staffer on the Jeremy Kyle Show describe her ‘bizarre connection’ with producers, whom she ‘thinks they’re like her friends’.

She described the staffer’s insight as a revelation and understood for the first time that the producers’ interest in her was to stop her talking to the media.

Ms Callaghan added: ‘As far as I’m concerned, [The Jeremy Kyle Show] did contribute towards his death. Because I found out in the documentary that the lie detector wasn’t 99.9%.

‘It was actually 50-60%, and not a chance in hell would me and Steve have gone onto that show if I knew that. Now I believe that Steve was telling the truth.’ 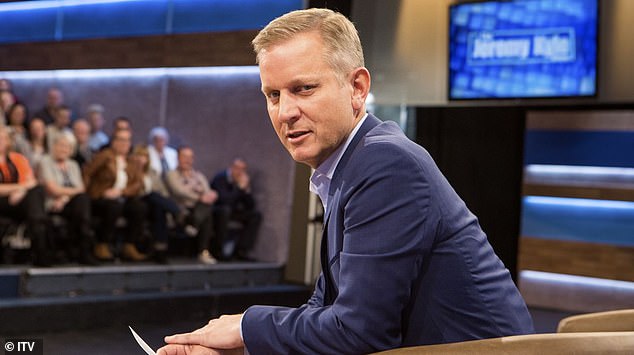 In the documentary, junior staff on The Keremy Kyle Show claimed they were recruited because they were working class so could help handle the guests.

There were also clips of Kyle’s rants, including one where he berates production staff and declares: ‘Would Philip Schofield have to put up with this?’

Ms Callaghan told how Mr Dymond was ‘chuffed to bits’ to go on The Jeremy Kyle Show and kept telling her: ‘This is where we start our new life, babe.’

On the day of the recording on May 2, 2019, Ms Callaghan said he was picked up in a taxi and went to the studio – and the next time she saw him was on set.

She said: ‘I went on first and then Steve, he was crying, when he come on the stage he was crying. You could see he was all upset and all snotty, he’d be crying. He came on and he sat down. I remember I held his hand, and it wasn’t like Steve, usually he’d hold it back, but nothing there.

‘Then the lie detector came and when the results came, he read them out, he read one out, he didn’t read the other two – and he just said you’d lied on all occasions. And Steve said “no I never, I never”.

‘Jeremy was asking him questions and Steve wasn’t coming out with the right words, he was getting himself into deeper trouble. Jeremy said has anyone got a shovel, to say he’s digging himself in a bigger hole. He said something about he don’t trust him with a chocolate button because he’d lied so much.’ 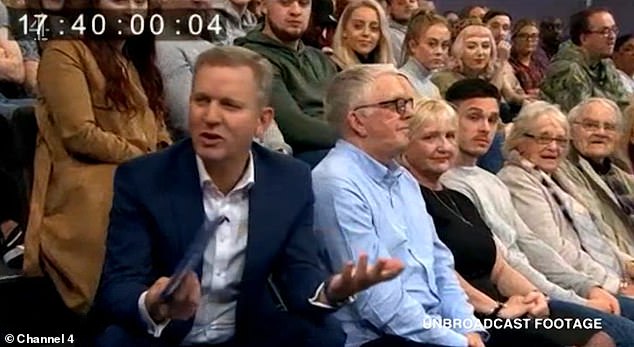 Jeremy Kyle is seen criticising members of the audience for talking while he is doing a piece to camera, looking exasperated 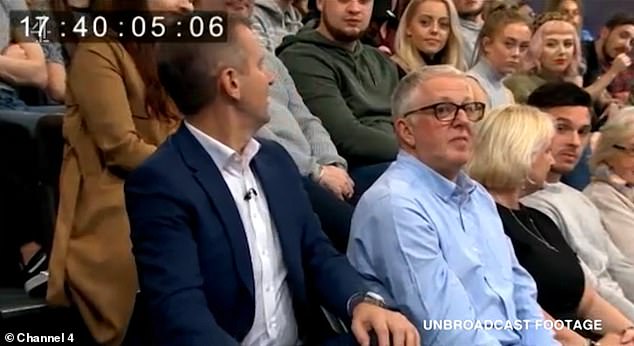 After being interrupted, a furious Kyle says: ‘What is it, why does everybody talk, what is that? Shut up. F***ing unbelievable’

Ms Callaghan revealed that she was so in shock at what had happened that she ‘couldn’t cry’, adding that he left her ‘hundreds of voicemails’ and even turned up outside her house trying to speak to her.

Ms Callaghan continued: ‘He had (expressed suicidal thoughts), but he’s always saying it. I feel so sorry for him, didn’t think he’d do it.

‘He felt really big. I cuddled him. He felt massive, really big. He just looked asleep. All his wrinkles had gone.’

Last week it was also revealed that Mr Dymond had said he hoped he would ‘make good ratings’ for Kyle’s show, in a series of anguished messages sent to his fiancee before his apparent suicide.

In his final text messages to Ms Callaghan, Mr Dymond wrote: ‘I hope the Jeremy Kyle show is so happy now. They are responsible for what happens now.

‘I hope this makes good ratings for them. I bet they keep this quiet. Never never never did I cheat on you. Never never. My final words.’

The documentary also heard from former workers on the show who revealed how they would receive regular calls from guests threatening to kill themselves – but tried to talk them out of it so the show went on air and did not ‘waste any money’.

The programme was canned by ITV in 2019 as the result of a public outcry prompted by the death of Mr Dymond.

Bitcoin Breaks Above $30k as Argentina Launches a Bitcoin Building