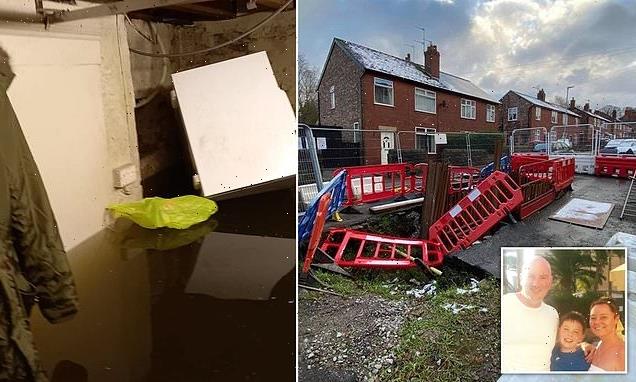 Family living next to giant SINKHOLE are forced to cancel Christmas

A family living next to a giant sinkhole have been forced to cancel their Christmas holiday to Blackpool so they can take it in turns pumping five feet of water out of their cellar.

Mr Clarke, his wife Sarah, 48, and son Dillon, 12, have to take turns pumping the water out of their cellar through the night, taking ‘shifts to sleep’, to protect the rest of their Macclesfield home.

In the last five weeks flood water has damaged the property and threatened the electrics five times. On December 4 firefighters had to be called to help.

A washing machine, tumble dryer and jet washer in the cellar – despite being kept off the ground on plinths – have been destroyed by the muddy water.

Mr Clarke has now decided to cancel the family’s three-day Christmas break to Blackpool so they can stay home to keep their house safe.

Another worry is that their home could be be demolished, after a building on a nearby street was cleared so another sinkhole could be fixed.

Mr Clarke, a commercial manager, said: ‘It’s impossible to over emphasise how worried we are about our safety and the possibility of being the next house to be demolished.’ 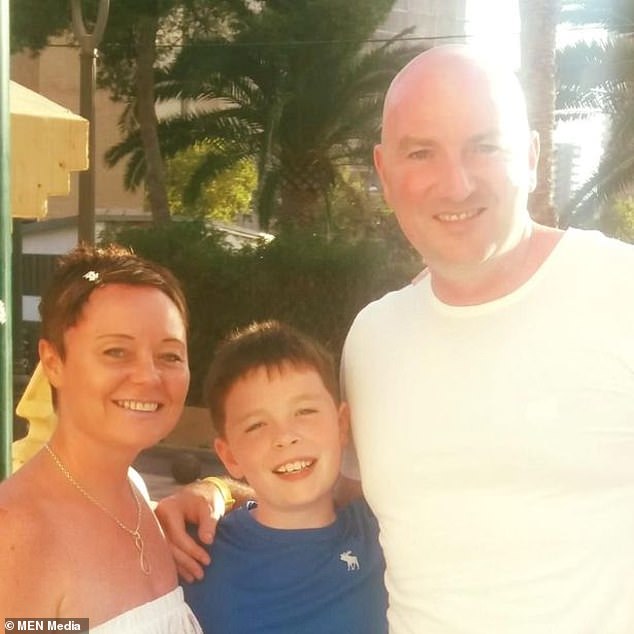 Nick Clarke, 49, says the problem has been going on for four years but has returned with a vengeance since Cheshire East Council’s ‘temporary fix’ for the sinkhole last month. Pictured, Mr Clarke with his wife Sarah, 48, and son Dillon, 12

He added: ‘If there is any rain at all now it comes in, the heavier it is the higher the water goes.’

‘I had booked to go to Blackpool with the in-laws as a Christmas treat but we can’t go now as we don’t want to leave the house. It has definitely spoiled Christmas and we’ve lost a lot of money.

‘It is horrible to live with, we can’t go anywhere when it rains and we take it in shifts to sleep.’

The cellar at the family’s house drains into a culvert that collapsed and caused the long-running sinkhole problems in the area.

In periods of rain, water comes back up through the drain as well as through the cellar floor, leaving smelly mud and silt when it recedes or is pumped out.

The collapsed culvert first caused a sinkhole to open up on Ryle Street in summer 2018.

It is now fixed but another was created on Hobson Street in early 2020, which was filled in last month as a temporary fix but still needs dealing with permanently. 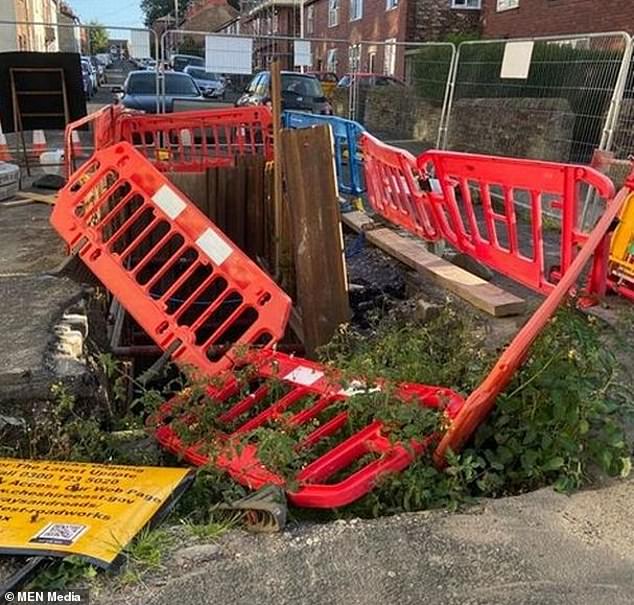 Whenever there is heavy rain the family’s cellar gets flooded with up to 5ft of water and they have to take turns pumping it out – even through the night. Mr Clarke said this has happened five times in the last five weeks. Pictured, the council’s temporary fix

Mr Clarke believes the initial collapse that caused a blockage of the culvert – and subsequently the holes – happened four years ago and is responsible for the flooding.

When the Hobson Street sinkhole was open for 20 months it took away his flooding problem as it gave the water another escape route.

But when council contractors fixed it, by connecting the culvert to a sewer. this caused the issue to worsen.

A United Utilities spokesman said: ‘The original sinkhole on Hobson Street in Macclesfield was caused by a collapsed culvert which in turn damaged our sewer.

‘We repaired our sewer over a year ago and it has operated as it should since then.

‘Unfortunately a recent temporary repair completed by the council, which involved connecting the culvert into our sewer, is now causing flooding to a nearby property.

‘Due to the excessive flows going through the culvert, we did not give permission for this connection for fear it would cause flooding. We are in discussion with the council to request the culvert is disconnected from our sewer and an alternative solution is found.’

A complex situation is further complicated by riparian rights, which state that when your land adjoins a watercourse or has a watercourse flowing through or within it, then you are responsible. 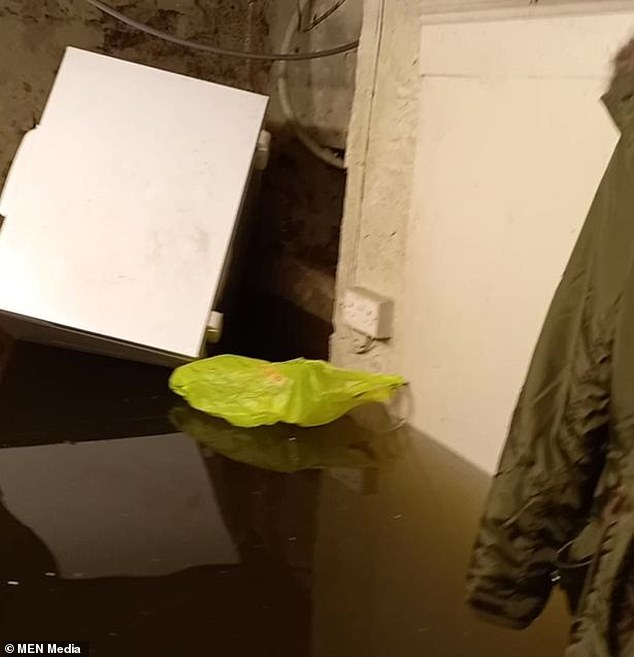 The cellar is flooded with up to 5ft of water whenever it rains. The family then have to take turns using a water pump to drain their house

But Mr Clarke’s said the council should still be responsible for sorting out his flooding issue because the problem stems from the highway, which falls under council jurisdiction.

‘However, council officers continue to liaise with colleagues at United Utilities to ensure a satisfactory and collaborative solution is agreed for the Hobson Street residents.

‘This continues to be a complex and challenging matter and the council is working with United Utilities, and other partner agencies, to identify a long-term and permanent solution to the problems faced with the culverted watercourse and which manages any future implications for the public sewer network.’

United Utilities were given the opportunity to then provide further comment and said: ‘We have not issued anything misleading and we stand by our previous statement.’