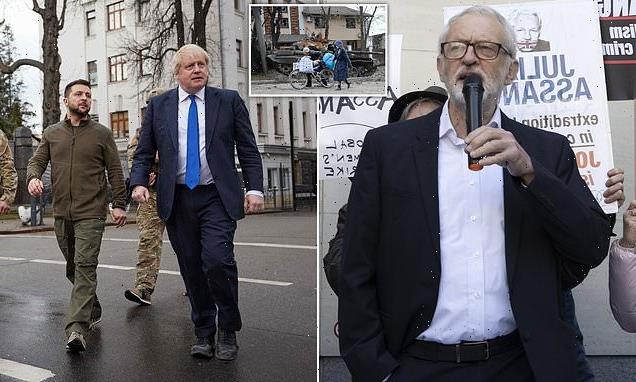 Jeremy Corbyn has said he would still like Nato to be disbanded despite its role in helping Ukraine resist the Russian invasion.

The hard left former Labour leader suggested military alliances like Nato could build up ‘greater danger’ in the world and should ultimately be scrapped.

Speaking to Times Radio the ex-Labour MP acknowledged the transatlantic alliance was not going to be scrapped immediately but added that people should ‘look at the process that could happen at the end of the Ukraine war’.

He said he did not blame Nato for Vladimir Putin’s invasion of Ukraine but questioned: ‘Do military alliances bring peace?’

He was also cool in his opinion on Ukrainian president Volodymyr Zelensky. Asked if he admired the war leader he said ‘I’ve never met him’, before admitting ‘he speaks well, I admire that’. 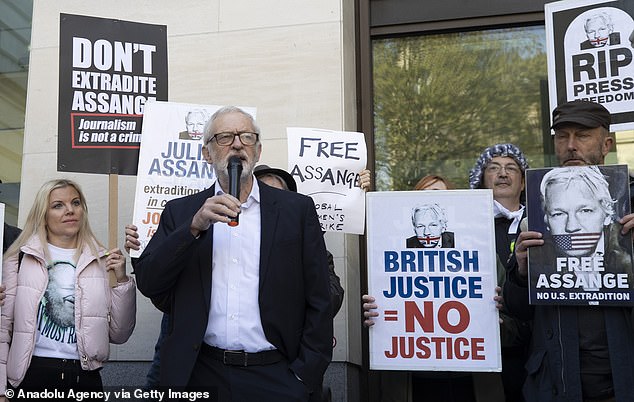 The hard left former Labour leader ([pictured today campaigning for the release of Julian Assange) suggested military alliances like Nato could build up ‘greater danger’ in the world and should ultimately be scrapped. 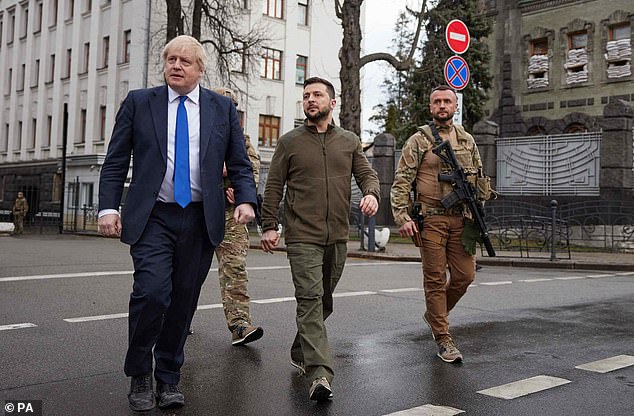 He was also cool in his opinion on Ukrainian president Volodymyr Zelensky (pictured in Kyiv with Boris Johnson). Asked if he admired the war leader he said ‘I’ve never met him’, before admitting ‘he speaks well, I admire that’.

Mr Corbyn, a long-standing critic of Nato, told John Pienaar: ‘I would want to see a world where we start to ultimately disband all military alliances.

‘Or is it by stopping the war in Ukraine and the other wars… that are going on at the present time, which are also killing a very large number of people?

‘And ask yourself the question, do military alliances bring peace? Or do they actually encourage each other and build up to a greater danger?

‘I don’t blame Nato for the fact that Russia has invaded Ukraine, what I say is look at the thing historically, and look at the process that could happen at the end of the Ukraine war.’

Mr Corbyn has sat as an independent since October 2020 after having the Labour whip removed over his response to the equalities watchdog’s report into antisemitism in the party.

Although he was reinstated as a Labour member after a suspension, Sir Keir Starmer has refused to readmit him to the parliamentary party.

Before the Russian invasion in February he joined 11 party MPs to attack Nato and UK ‘aggression’ in the country.

It demanded Nato ‘call a halt to its eastward expansion’ and urged ‘the entire anti-war movement to unite on the basis of challenging the British government’s aggressive posturing and direct its campaigning to that end above all’.

The Labour MPs, all supporters of the former leader, were forced to disown the Stop the War Coalition campaign after Mr Starmer threatened to also boot them out of the parliamentary party.

But Mr Corbyn continued to support it, though he has since criticised the invasion.

In his interview he did little to suggest he would be returning to the Labour fold, even if allowed.

He declined to rule out starting a breakaway party, possibly based on his peace and justice project, even as he suggested after May’s local elections in May would be a ‘good opportunity’ to reinstate him.

‘I don’t know what the future is going to bring. I am focused on representing my constituency, being a Member of Parliament and on saying to the Labour Party: to win the next election, you have to appeal to people,’ he said.

‘And you have to appeal to people on the basis of economic justice and changes in the power structures within our society.

‘Abandoning policies that would achieve that, particularly public ownership, is not going to excite people.’