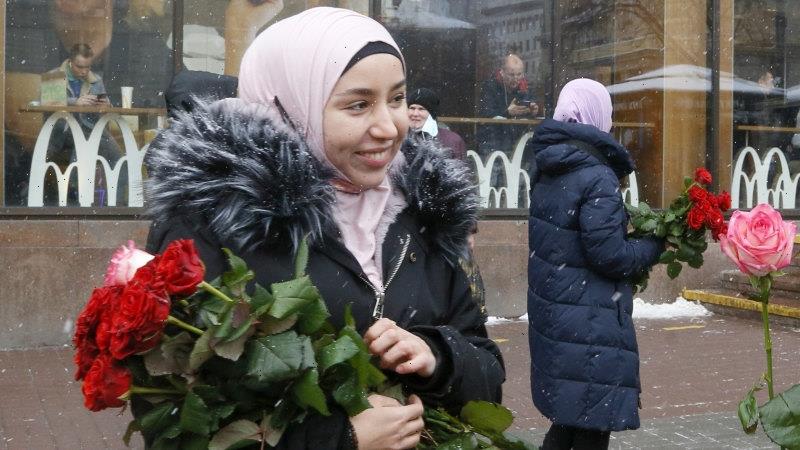 EU’s top court rules headscarves can be banned at workplaces

Paris: The European Union’s highest court has reaffirmed that companies in Europe can bar women from wearing headscarves on the job, a ruling that holds consequences for the balance between the freedom of religion and the rights of employers to apply policies requiring religious neutrality.

The ruling was based on separate cases filed by two Muslim women in Germany who were suspended from work for wearing a hijab, an Islamic head covering. The court said company policies barring workers from wearing any “visible form of expression of political, philosophical or religious beliefs in the workplace” did not constitute direct discrimination, so long as they applied to religious garb and symbols of all faiths. 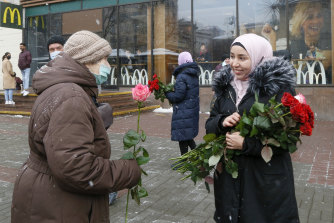 An activist in a hijab presents a flower to a woman passerby to mark the World Hijab Day in Kyev, Ukraine, on February 1.Credit:AP

But in further defining its 2017 ruling, which had allowed companies to bar headscarves from the workplace, the European Court of Justice said employers must present evidence that such policies are necessary to meet a “genuine need” to conduct business, including presenting “a neutral image toward customers or to prevent social disputes,” the court said.

The wearing of the hijab has fuelled controversy across Europe for years and remains a focal point in the politically explosive issue of Muslim integration. Human rights organisations argued that Muslim women would face pressure and exclusion in the workplace in the wake of the court’s decision.

“Laws, policies and practices prohibiting religious dress are targeted manifestations of Islamophobia that seek to exclude Muslim women from public life or render them invisible,” Maryam H’madoun, a policy officer at the Open Society Justice Initiative, said in a statement. “Discrimination masquerading as ‘neutrality’ is the veil that actually needs to be lifted,” she said.

In the United States, by contrast, federal labour laws require employers “to permit applicants and employees to observe religious dress and grooming practices,” according to the Equal Employment Opportunity Commission.

Discrimination against Muslims, as well anti-Semitism and anti-immigrant sentiment, is on the rise across the Continent. The Council of Europe warned this month that hate speech towards those groups, particularly online, had become a “growing and dangerous trend” during the pandemic.

Several countries, including France, Belgium, Austria and the Netherlands, have passed laws effectively banning full face-covering veils in public spaces, although the hijab, which covers the head and shoulders, does not fall into that category.

In recent years, however, the European Court of Justice, as well as national courts in EU countries, have backed policies that largely prohibit women from wearing headscarves while on the job in the private sector.

The issue has been a hotly contested one in Germany for years, home to 5 million Muslims, the country’s largest religious minority group. A number of cases have been heard, mainly involving applicants for public school positions and judges. In France, where Muslims make up nearly 1 in 10 residents, the country’s top court upheld the firing of a Muslim day care worker in 2014 who refused to give up wearing a headscarf.

The European Court of Justice, based in Luxembourg, interprets laws for the 27-nation EU.

The case decided on Thursday (Friday AEST) came out of the courts in Germany, where two women — a special-needs caregiver at a non-profit in Hamburg and a cashier at a pharmacy chain — challenged their suspension from their jobs for wearing headscarves, arguing the terminations violated their right to religious freedom.

In both cases, the women got into trouble after returning to work from parental leave. The women had not worn headscarves before taking time off work for the birth of their children, but started wearing them upon their return.

The caregiver’s employer, a social services association, suspended her twice after she refused to remove the headscarf, but the court ruled that she wasn’t treated unfairly because the employer had also required another employee wearing a religious cross to remove it in accordance with its internal rules prohibiting the display of religious symbols.

The cashier’s employer, the Mueller pharmacy chain, transferred her to a post less visible to customers after she declined to remove her headscarf, and subsequently sent her home and instructed her to come to work without it. The court said the action wasn’t discriminatory because the company sought to project a neutral image to its customers.

Deputy indicted in shooting of man who called 911 for help