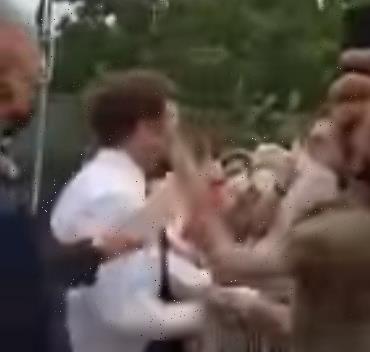 EMMANUEL Macron was slapped in the face by a furious voter on his campaign trail today as the French president's popularity nosedives.

A shocking video clip shows a man dressed in a green t-shirt, glasses and a face mask shout "Down with Macronia!" before delivering a slap to Macron's face. 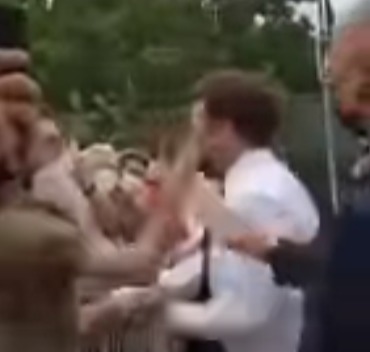 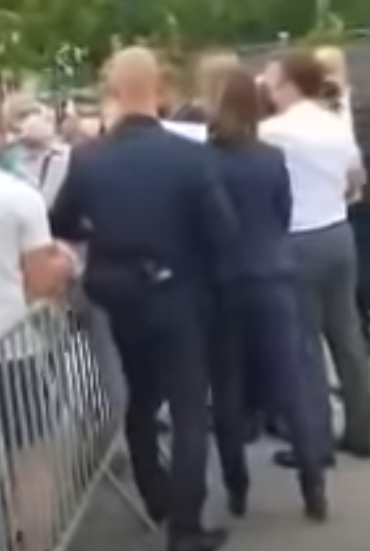 Two people have been arrested after the man took aim at the 43-year-old centrist during a walkabout session with a crowd in the Drome region, broadcasters BFM TV and RMC radio reported.

In the footage, Macron, dressed in a white shirt and a black face mask, could be seen walking towards a crowd of well-wishers in the village of Tain-l'Hermitage who were stood behind a metal barrier.

The French president reached out his hand to greet the man in the green t-shirt – but the unidentified assailant grabbed his arm and slapped him in the face.

The crowd erupted as Macron's security entourage quickly pulled him away from the fence where he was greeting the voters.

"Mr Macron appeared very relaxed and thought he was getting a good reception from those watching him," an eyewitness said.

"He was outside a catering school when he stuck his right hand towards a man who promptly grabbed it.

"Then the man slapped the president in the face, before Mr Macron was pulled away by security guards."

There were shouts of "f*** off" as he was swiftly bundled away.

But Macron appeared to return to the crowd flanked by cops and security guards just moments later, and seemed to be talking to someone on the other side of the barriers.

The presidential administration said there had been an attempt to strike Macron.

An Élysée Palace spokesman said: "He was not seriously hurt in the incident."

A local police spokesman confirmed two men were detained at the scene.

"One is thought to have described himself as an anarchist, but an enquiry is ongoing," the spokesman said.

The presidential administration confirmed there had been an attempt to strike Macron.

An Élysée Palace spokesman said: "He was not seriously hurt in the incident."

Macron was on the second stage of his campaign trail, which is being held before regional elections in two weeks – and less than a year before a presidential election in 2022.

But the leader's popularity with French voters has tanked over the handling of the coronavirus pandemic- and because many see him as "arrogant".

Shortly before being slapped, Macron had been asked to comment on recent remarks from far-left leader Jean-Luc Melenchon who suggested next year's election would be manipulated.

"Democratic life needs calm and respect, from everyone, politicians as well as citizens," Macron said.

In July last year, Macron and his wife Brigitte were verbally abused by a group of protesters while taking an impromptu walk through the Tuileries gardens in central Paris.

Thesun.co.uk is your go to destination for the best celebrity news, football news, real-life stories, jaw-dropping pictures and must-see video.

The first piece in Kanye West's Yeezy Gap line sold out in a few hours. Here's what it looks like