Benghazi: Forces aligned with strongman Khalifa Haftar have vowed to intensify an assault on Tripoli, as the death toll in a battle now in its third week rose past 254.

The Libyan National Army (LNA) force loyal to commander Haftar and allied to a parallel government in the east of the city has launched an offensive to take the capital but has been unable to breach Tripoli's southern defences. 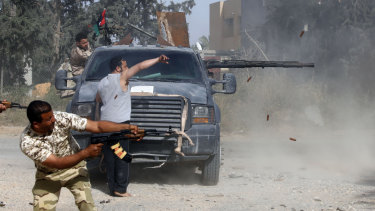 Libyan fighters loyal to the Government of National Accord (GNA) fire their guns during clashes with forces loyal to strongman Khalifa Haftar south of Tripoli.Credit:AFP

The leader of Libya's internationally recognised government operating in the west said foreign backers have been arming Haftar since he launched an offensive three weeks ago to take the capital, Tripoli, warned of a proxy war.

Prime Minister Fayez al-Sarraj declined to identify the countries. But states including Egypt, the United Arab Emirates and Russia have provided weapons in the past to the leader of the self-styled Libyan National Army, the country's largest and most organised force. 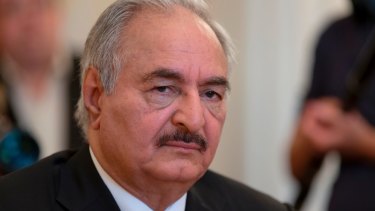 Sarraj says he won't negotiate until Haftar withdraws his forces, and that he's disappointed by the muted international reaction to the assault.

The death toll since the start of fighting has reached 254, while 1228 people have been wounded, the World Health Organisation said. More than 32,000 people have been displaced, the UN humanitarian agency added.

In a surprise move, US President Donald Trump spoke to Haftar last week, recognising his role in combating terrorism, as Washington and Russia stymied a United Nations Security Council resolution calling for a ceasefire.

Analysts said the language suggested a reversal by Washington, which had initially demanded the withdrawal of Haftar's forces. But Sarraj said in an interview on Monday that the US administration informed him it remains opposed to the assault.

"We deal with statements from the State Department and direct contacts with the American administration and the message is very clear: They are not pleased with the attack on Tripoli," he said.

LNA spokesman Ahmed Mismari said his forces had slowed on Monday because of the dense population in the areas where fighting was taking place, but added the LNA was calling in reservists to open new fronts on Tripoli.

He said it would use artillery and infantry in the next days. He gave no details. 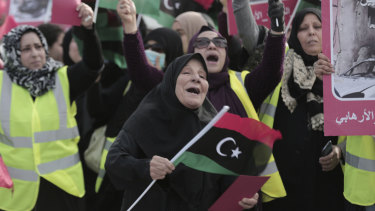 Women take part in a protest in Tripoli, Libya as they wave national flags and chant slogans against Libya’s Field Marshal Khalifa Hifter, who is leading an offensive to take over Tripoli, last week.Credit:AP

Shelling could be still be heard even in central Tripoli 11 km from the frontline and smoke billowed from one spot in southern Tripoli.

Without a quick resolution, the conflict threatens to turn into a proxy war pitting Haftar's backers against countries such as Qatar and Turkey that have supported Sarraj and allied militias.

"Weapons and equipment have not stopped reaching Haftar, before and after the offensive," Sarraj said. Asked about the possibility of a proxy war in the North African oil-rich state, he replied, "Of course there are fears." 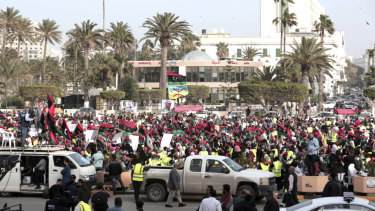 Libya, which is split between his Tripoli-based Government of National Accord and the rival administration in the east, is under a United Nations arms embargo, and Sarraj voiced frustration with the militia commander's alleged advantage.

Sarraj did not say whether he and his allies were receiving support. The LNA accuses Turkey and Qatar of backing his forces.

Haftar's offensive came as a complete surprise, the Prime Minister said. The two men had been preparing to meet in Libya on the week of the offensive ahead of a planned UN-sponsored conference on April 14. The campaign – which Haftar has cast as a fight against terrorist groups – began while UN Secretary-General Antonio Guterres was visiting Tripoli.

Sarraj cast doubt that Haftar could be a partner for future talks, noting that the two had held an amiable conversation about negotiations just days before the offensive began.

"He wants the whole cake," he said.

IS Prime Secures Paul Jackson as Director of Sales