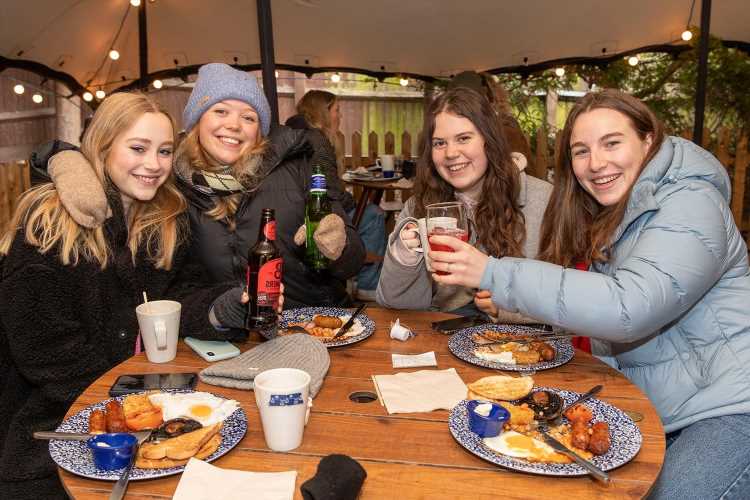 IT'S a bitter 3C with squalls of sleet blowing across the Fox on the Hill’s beer garden.

Punters would have been forgiven for giving Britain’s new alfresco boozing experience the flick. 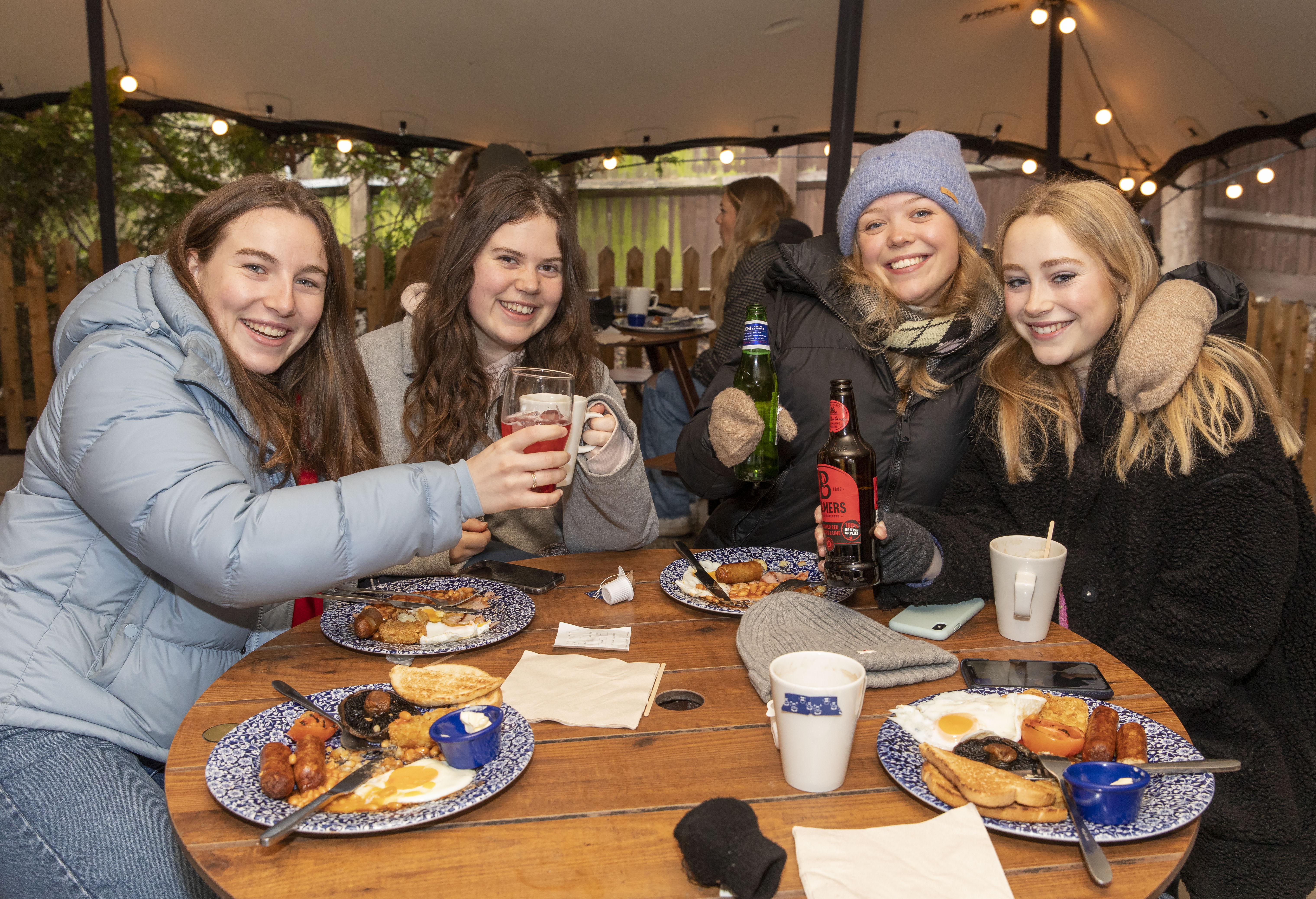 As an outdoor dining experience, Marbella old town it ain’t.

Perched on a windswept hill above gritty Camberwell, the ‘Spoons pub has commanding views of South London’s high rises.

But as the clock ticked inexorably towards 9am opening time, they began arriving under umbrellas and wrapped in woollens.

By the time the first pint was pulled at least 50 thirsty drinkers – sheltering on wooden tables beneath a canvas canopy – were waiting to be served. 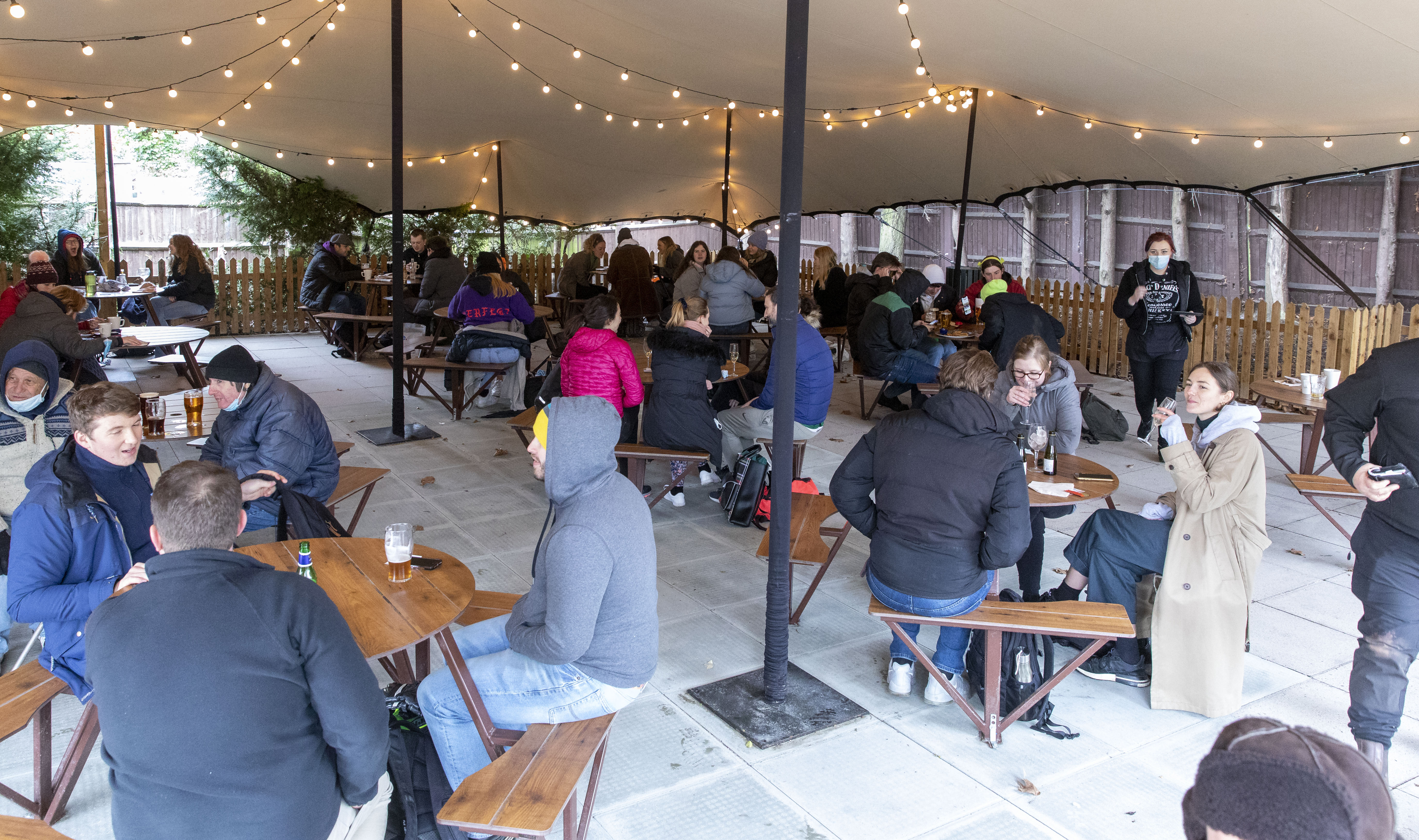 Soon frothy ales and hearty Full English breakfasts were being carried aloft from the pub to cheers from the crowd.

Natural sciences student Lars Dautlich, 19, enjoying an IPA, told me: “There’s nothing like a pub.

“I’ve really missed the atmosphere with everyone together. It’s been a long wait.” 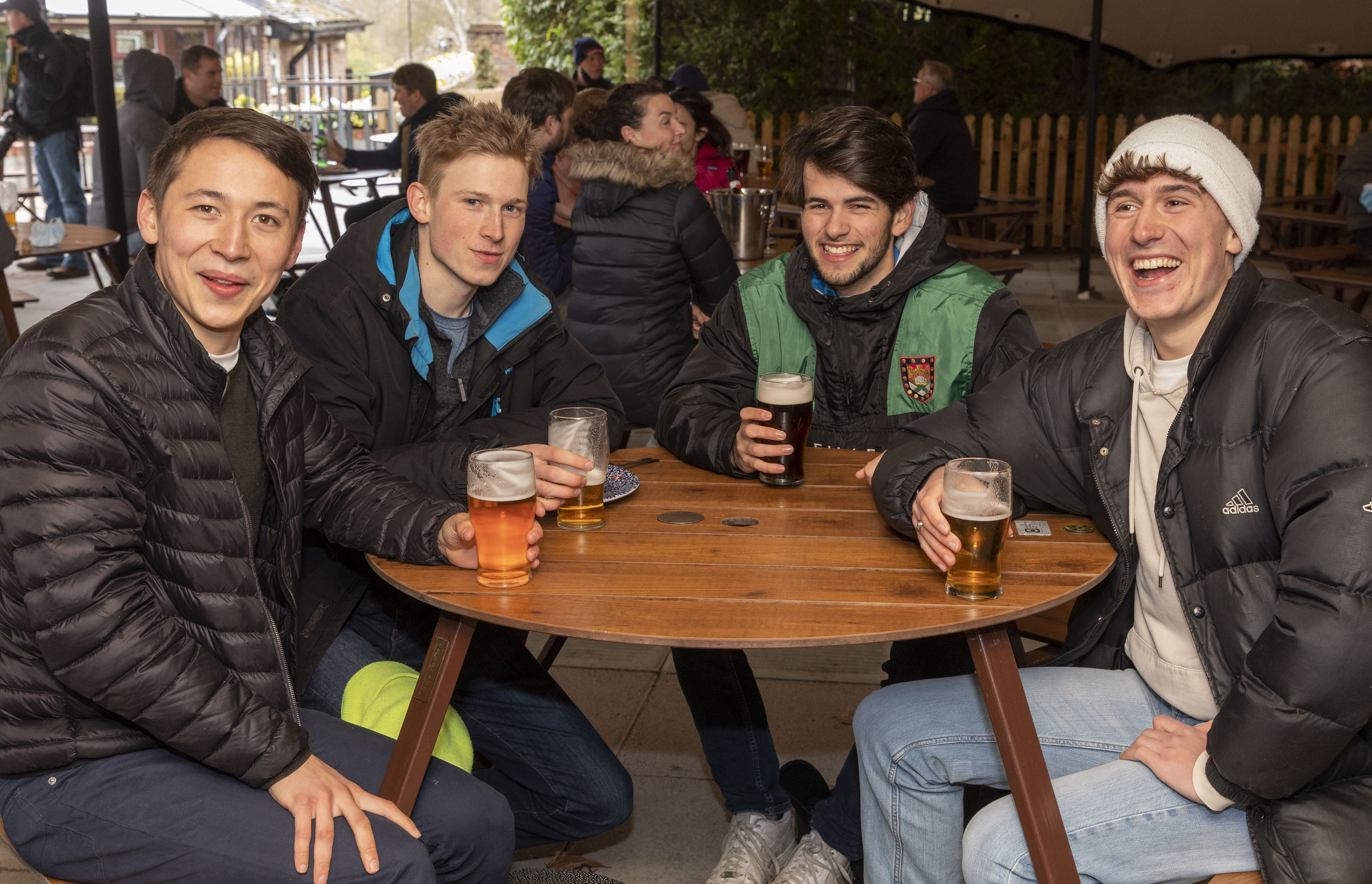 Clasping his pint of IPA reverently, student Adam Xu, 20, said: “It’s so rich and creamy. It’s going down so smoothly.”

Around 15,000 pubs – 40 per cent of the total in England – re-opened for outside drinking on Monday

At Wetherspoons' the Fox on the Hill there was a pleasant mix of older drinkers, students and NHS workers from nearby hospitals. 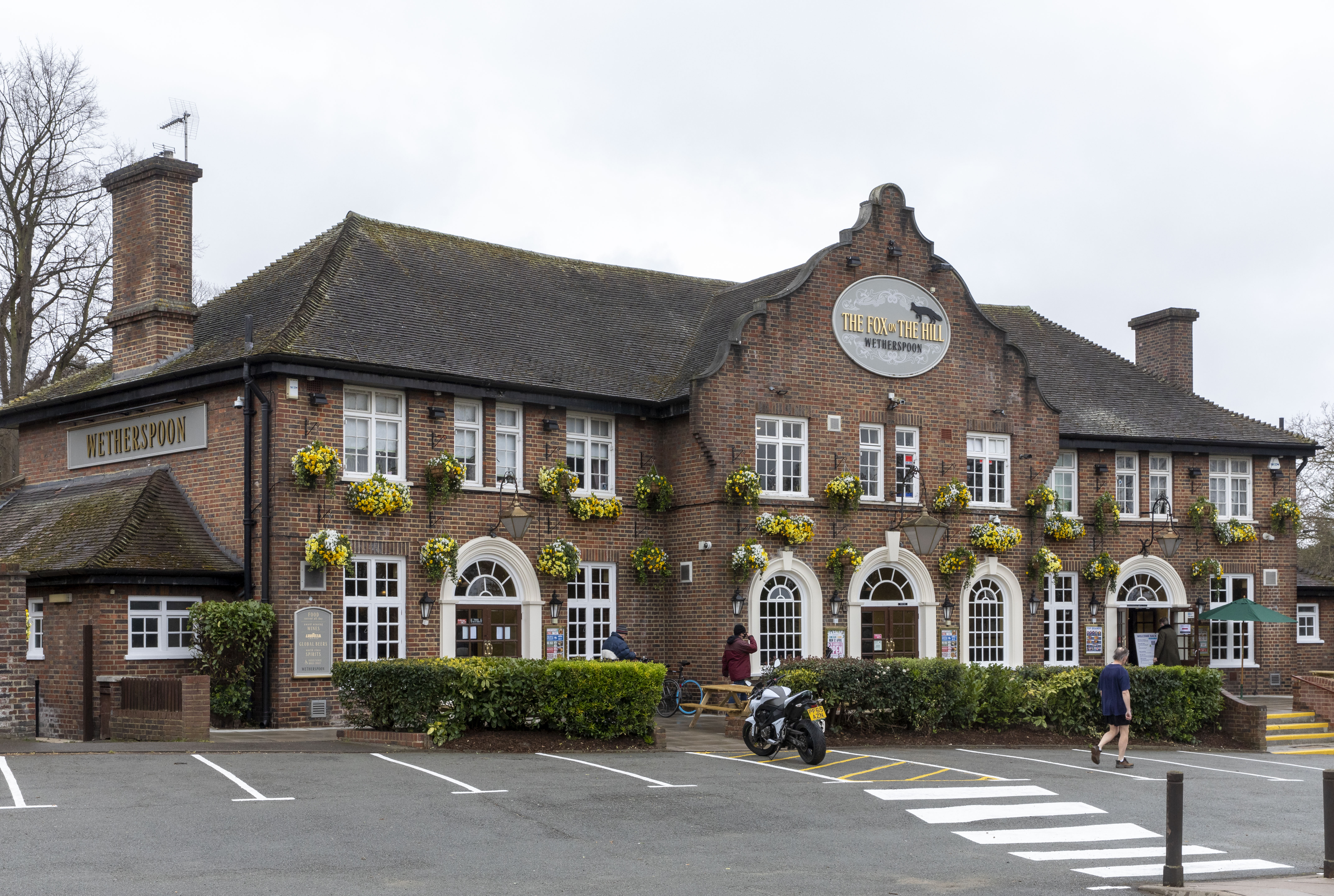 In an England beanie hat, retired printer Ken Albone, 60, looked around at his fellow drinkers and said: “I’ve missed this so much.” 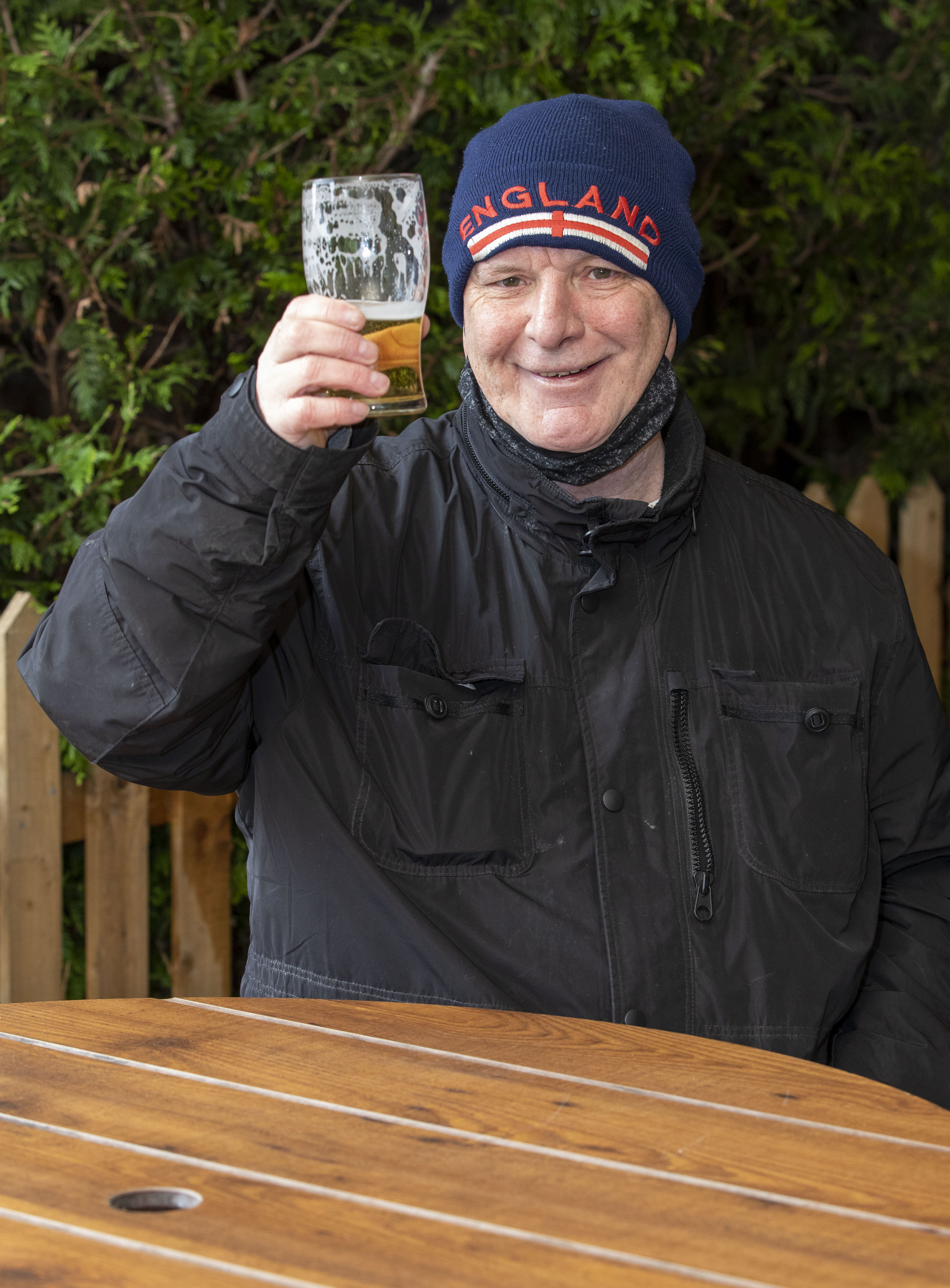 Drinking a Bud Light, the Chelsea fan added: “I’m wearing a coat, a fleece, the lot. It’s freezing but worth it to be here.”

On a nearby table, biology student Imogen Sleep, 19, said: “I’m wearing mittens and leggings under my jeans. It’s so cold but worth it to be out socialising again.

Friend Meg Jago, 20, who is studying medicine, added: “I’m having a veggie breakfast and tea. I’m taking it easy because I’ve got a table booked at The Ship in Wandsworth later.” 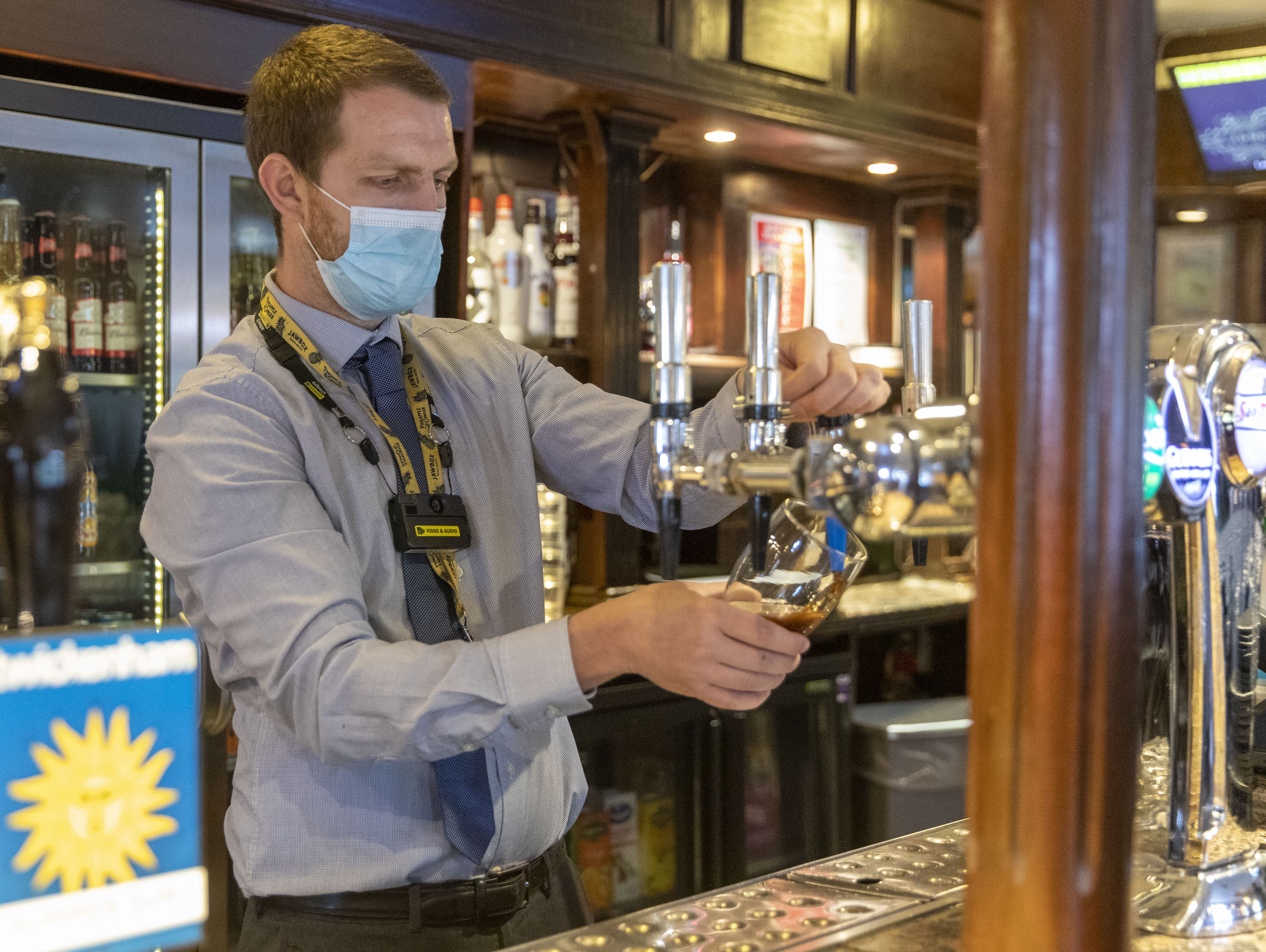 Manager of the Fox, Ryan Way, 30, poured me his first pint of Guinness in four months.

Guinness 'worth waiting for'

In the canopied area behind the pub, he presented it on a tray as the clock passed nine.

I eyed the stout like John Mills did his lager after trekking across the North African desert in the classic movie Ice Cold In Alex. 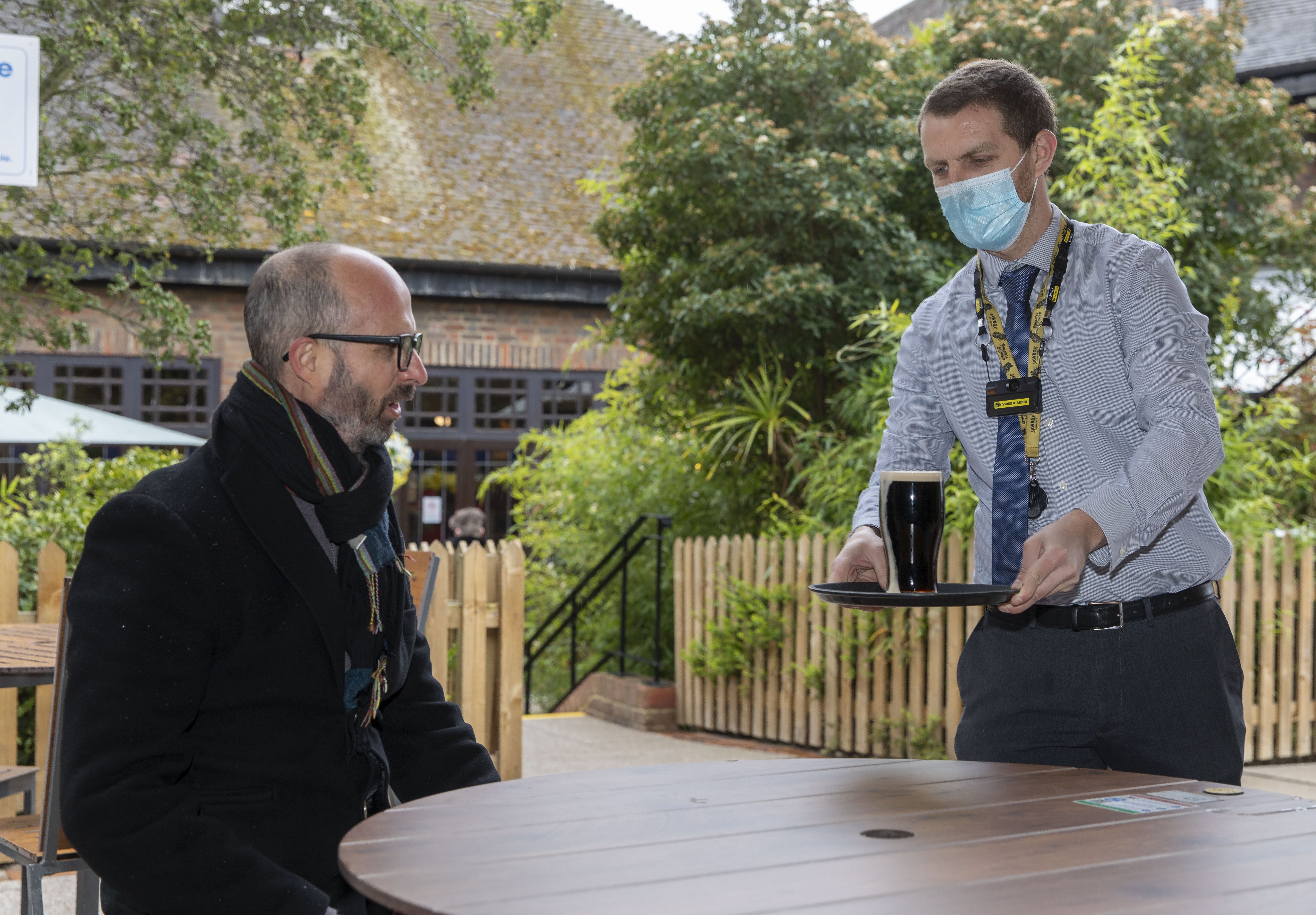 Taking a thirsty gulp, I concurred with Mills’ words in the film: “Worth waiting for.”

Pub boss Ryan said: “The staff are thrilled to be back and it's great to see so many customers here.”

Unlike other other pubs, the JD Wetherspoon chain isn’t taking bookings. 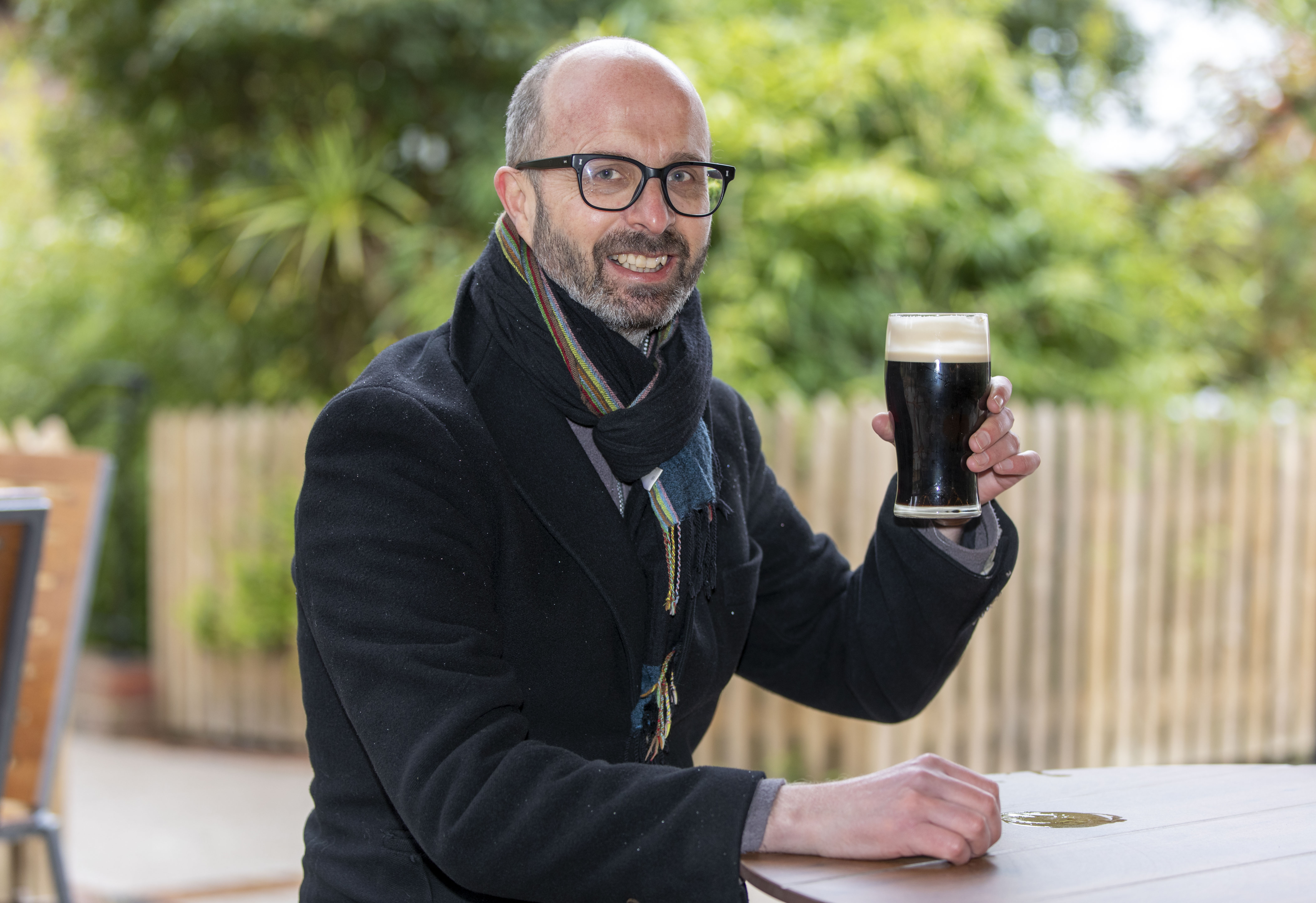 The Fox’s rambling garden has enough room on tables for 810 drinkers and has portaloos in the car park.

Test and trace rules mean everyone has to sign in when they arrive. Social distancing has to be obeyed and you have to wear a mask when not at your table. 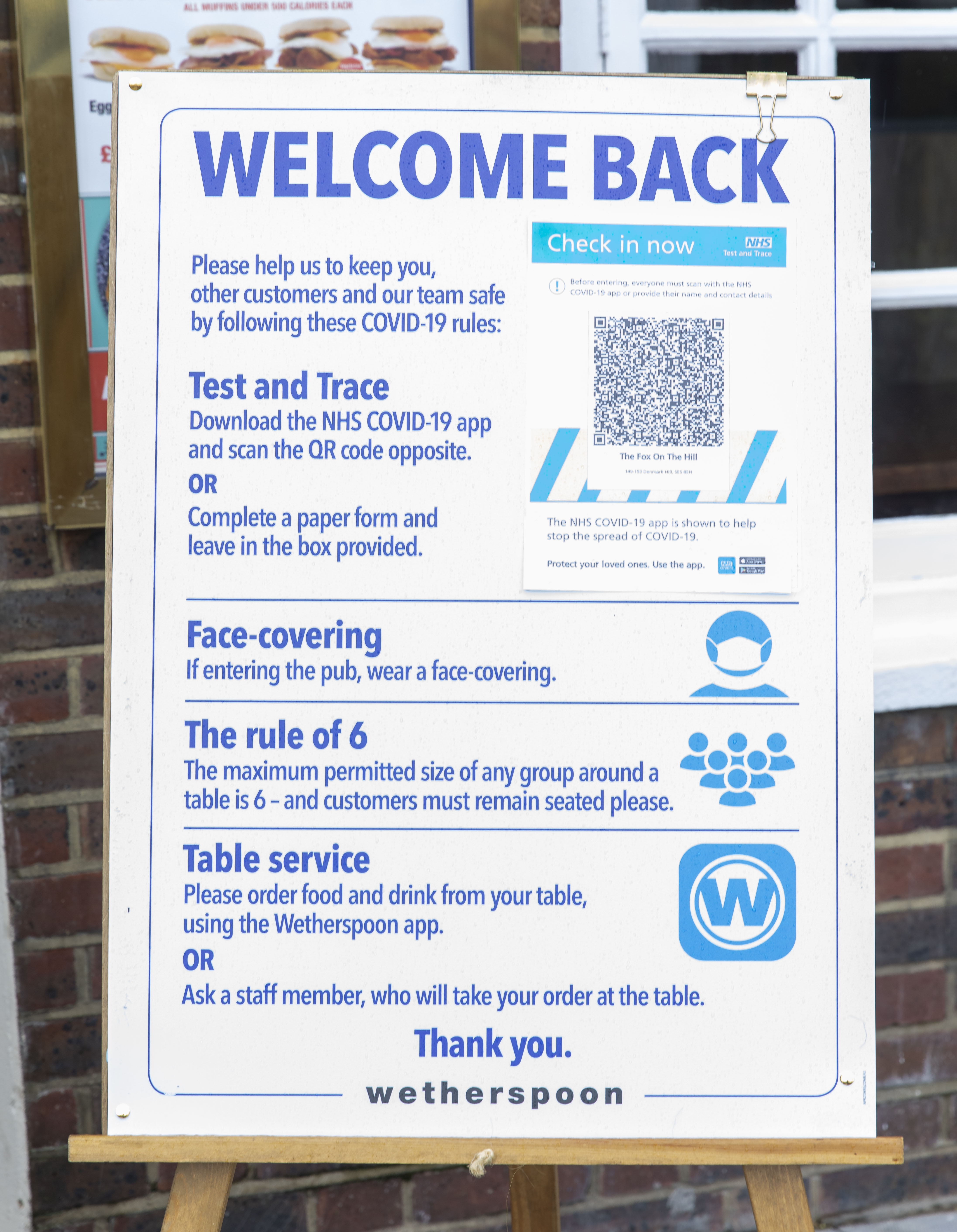 There’s no ordering at the bar. Instead customers use the Wetherspoons app or staff take the order and payment at the table.

Drinkers raise a glass to Duke

One table of drinkers even had a second pint each queued up and ready to be gulped.

Stagehand John Herbert, 60, added: “It’s just wonderful to socialise and be around people again. We’ve all been behind closed doors for so long.

“I’ll be raising a drink to the Duke of Edinburgh this week as I’m sure many others will be too.” 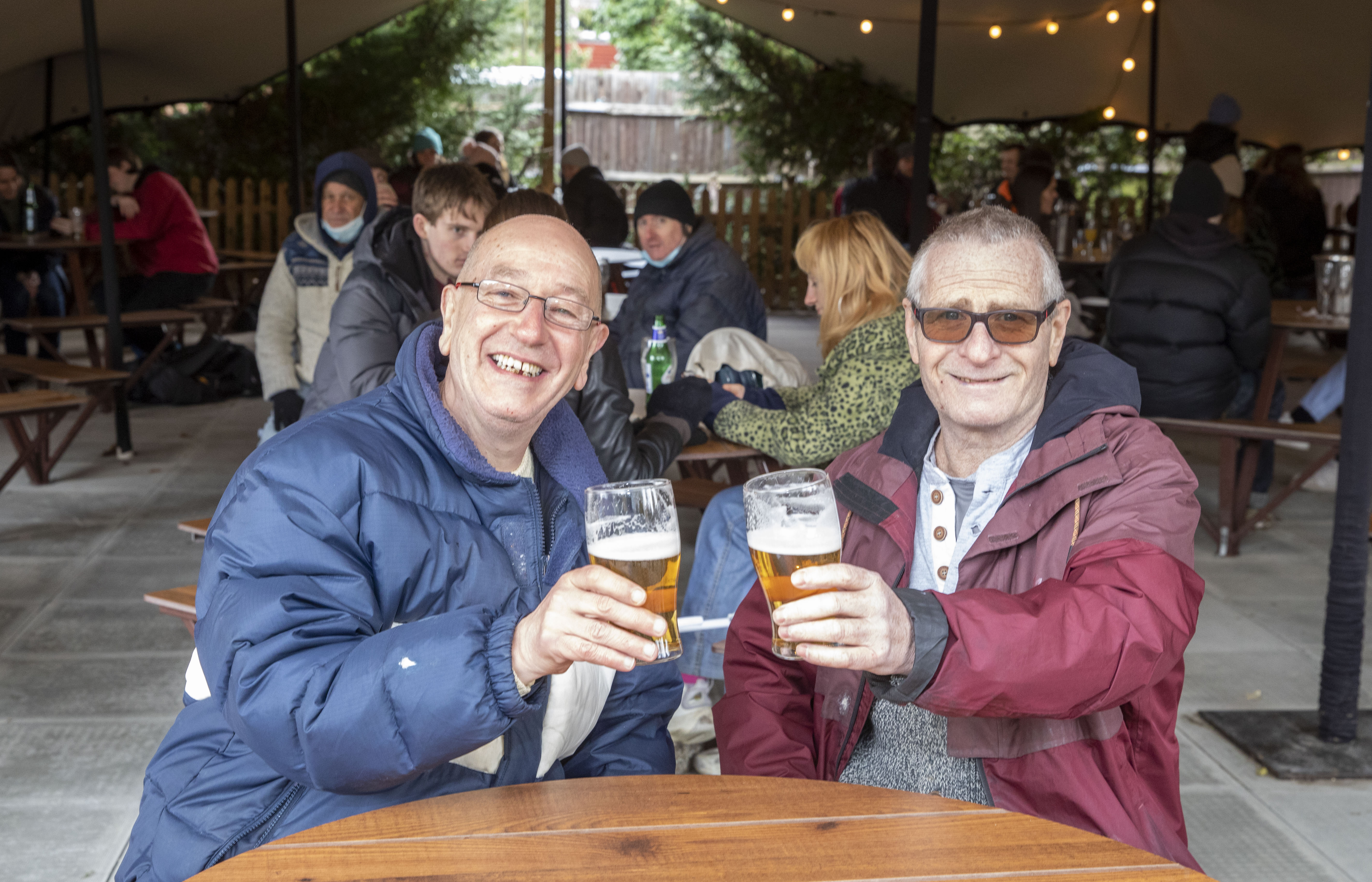 Pal retired builder Des Meader, 62, was breaking his 91-day booze fast, saying: “I don’t like drinking at home so I’ve been waiting for the pubs to re-open to have a pint.

Wetherspoon's spokesperson Eddie Gershon said: “We want to emphasise our pubs are safe to go to. 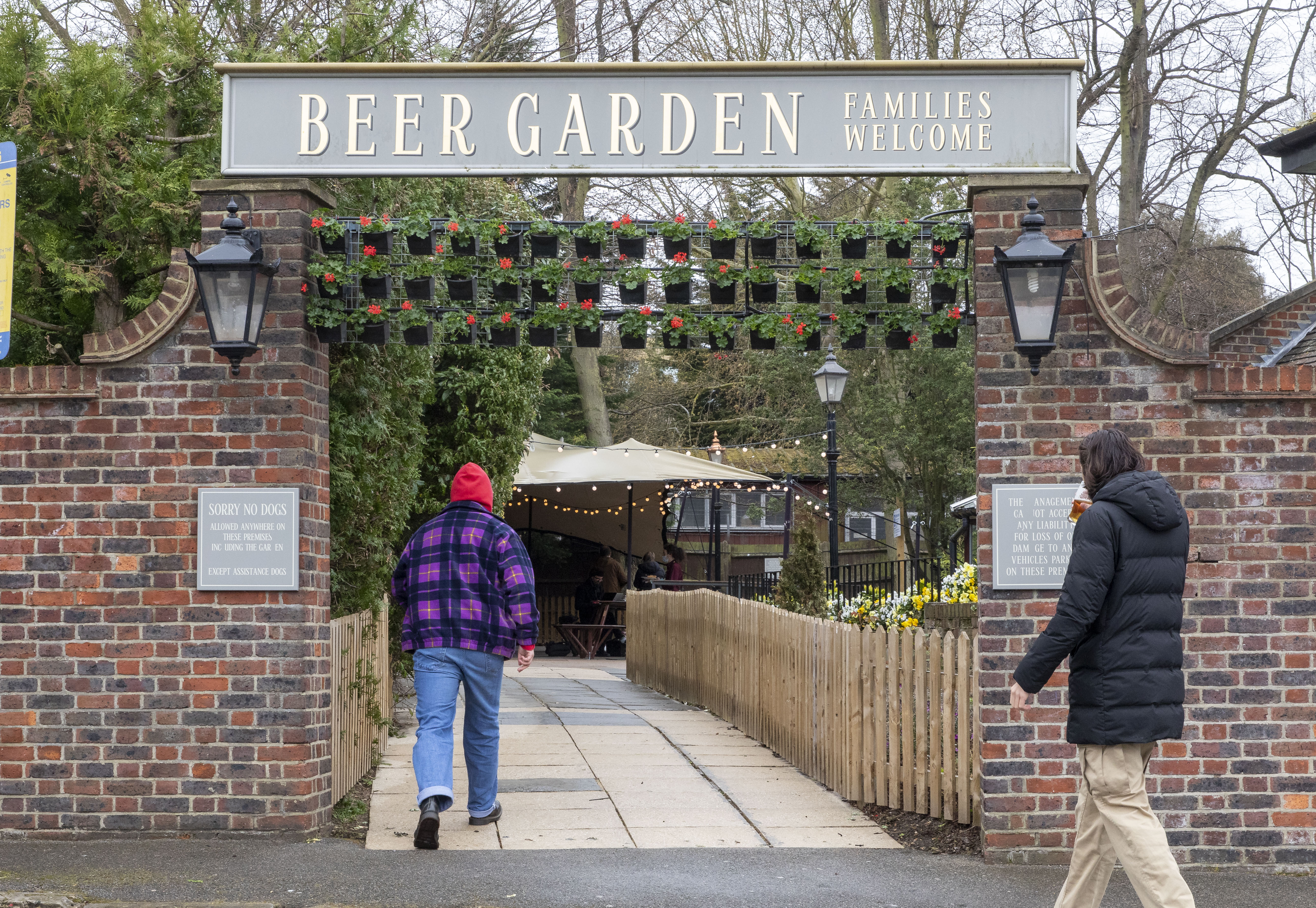 “Wetherspoon had over 50million visitors doing test and trace and not a single outbreak of covid emanating from that.”

The atmosphere at the Fox felt a little like drinking in a pub on Christmas Day. Everyone was jolly and keen to socialise.

Soon the number of drinkers had swollen to 70 and as the sun poked through the clouds, more began to arrive.

That cornerstone of national life – the great British pub – was back in business.