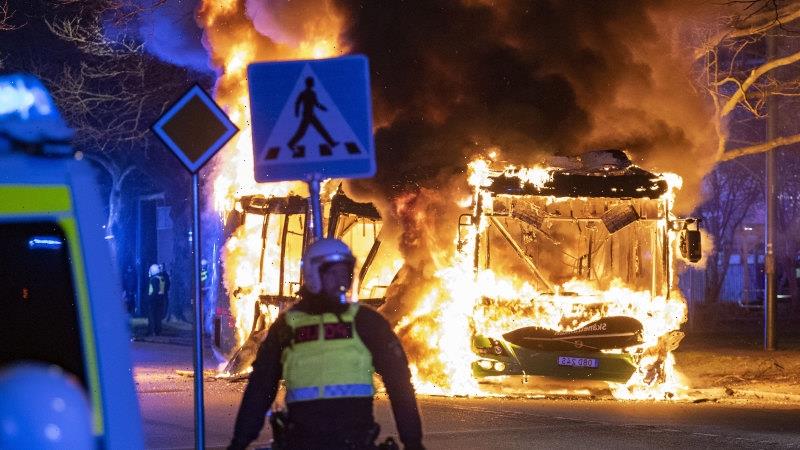 Dozens injured in riots in Sweden after planned Koran burnings

Helsinki: Swedish police say the riots that have shaken several cities and towns in the Nordic country are extremely serious crimes against society and suspect some protesters are linked to criminal gangs that intentionally target police.

Sweden, a nation of 10 million, has seen unrest, scuffles, arson and violence since Thursday that has left some police officers and protesters injured. It was triggered by Danish far-right politician Rasmus Paludan’s meetings and planned Koran burnings across the country. 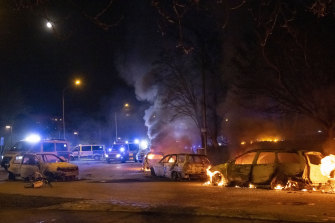 Cars are engulfed by flames after protests broke out at Rosengard in Malmo.Credit:Johan Nilsson/TT via AP

“We suspect that those involved (in the riots) have links to criminal gangs,” National Police Commissioner Anders Thornberg told a news conference on Monday night (AEST), adding some of those “criminal individuals” are known to police. “I have been in touch with the public prosecutor to prosecute these individuals.”

Sweden’s National Police Commander Jonas Hysing said that 26 police and 14 individuals — protesters or other people — have been injured in the riots and 20 police vehicles destroyed or damaged.

The latest riots broke out early Monday morning (AEST) in Malmo, Sweden’s third-largest city, as an angry crowd of mainly young people set fire to car tires, debris and garbage cans in the Rosengard district. Protesters threw stones and police responded by firing tear gas into the crowd. A school and several cars were set on fire, but the situation calmed down early Monday.

A total of 11 people were detained and three people arrested in Malmo. No serious injuries were reported. 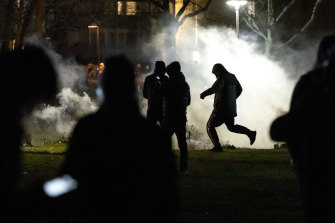 People are silhouetted by smoke after protests broke out at Rosengard in Malmo.Credit:Johan Nilsson/TT via AP

Since Thursday, in addition to Malmo, riots, unrest and violent clashes have been reported in Stockholm, the central city of Orebro, the eastern cities of Linkoping and Norrkoping and southern town of Landskrona.

Police have been forced to use weapons in self-defence, Hysing said. Three people were hurt in Norrkoping on Sunday as they were hit by ricochets as police fired warning shots into a crowd of protesters.

“There is a lot to suggest that the police were targeted,” Hysing said, adding that some protesters were suspected of attempted murder, aggravated assault and violence against an official.

Both Thornberg and Hysing stressed that the main target for the rioters was Swedish police and society, not Paludan — seen by many Swedes merely as an agent provocateur — and his Stram Kurs (Hard Line) party, which runs on an anti-immigrant, anti-Islam agenda. 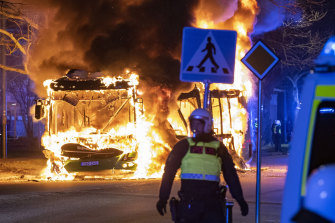 Riot police watch a city bus burn on a street in Malmo over the weekend.Credit:AP

Thornberg, Sweden’s supreme police chief, said “criminal individuals” who took advantage of the situation with Paludan’s Swedish Easter tour and joined the riots, were the main suspects for the violent flare-ups of violence. The unrest escalated quickly after Paludan’s first demonstrations, which were met by counter-protesters in many places last week.

“We must put an end to this early. What we see here is a very serious crime,” Thornberg said, referring to the riots.

Justice Minister Morgan Johansson said he continues to have great confidence in the Swedish police despite the unrest over the weekend and pledged more resources to law enforcement.

“When you end up in these critical and aggressive situations, there’s nothing else police officers can do but to put up a hard fight,” Johansson told Swedish news outlets. “We cannot accept that perpetrators commit this type of violence.” 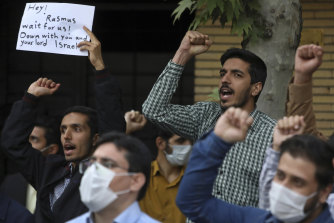 Protesters chant slogans during a demonstration to condemn planned Koran burnings by a right-wing group in Sweden, in front of the Swedish Embassy in Tehran, Iran.Credit:AP Photo/Vahid Salemi

In Iran, dozens of students gathered on Monday at Sweden’s embassy to protest Paludan’s planned Koran burnings. Chanting “Insulters of Koran must be condemned!” they also repeated traditional slogans such as “Death to America!” and “Death to Israel!”