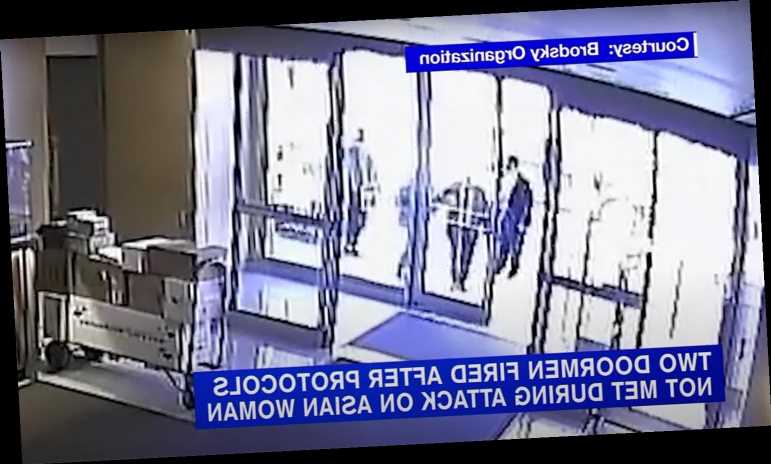 Doormen Fired After Appearing Not to Intervene During N.Y.C. Attack on Asian Woman Two lobby employees at a luxury New York City apartment building have been fired after surveillance video appeared to show them failing to intervene and then closing a door after an Asian woman was kicked to the ground in an attack on the street outside.

The firing of the building's doorman and concierge, who were not named, was confirmed by Kyle Bragg, the president of 32BJ SEIU, the service workers' union that represents the two employees.

It occurred amidst an alarming spike in attacks on members of the Asian American community, with New York City registering the largest increase, according to a report by the Center for the Study of Hate and Extremism at California State University, San Bernardino.

Disturbing surveillance footage of the incident that went viral showed that after knocking the victim to the ground, the suspect punched Kari and then stomped several times on her head before fleeing. A criminal complaint alleged that Elliot singled her out as Asian and told her, "You don't belong here," reports The New York Times.

The initial widely-shared video appeared to show someone inside the building where the surveillance video originated closing an open door before walking away from her.

Yet both of the fired employees "did assist the victim and flagged down the police, as was shown in a longer version of the building's camera footage," Bragg said in a statement. In the initial surveillance footage of the assault on Kari, obtained by WABC-TV, it appears there were several eyewitnesses. None immediately can be seen coming to the victim's aid. In the second longer video, obtained by the Times, it appears the workers in the building's lobby most likely did not see the attack firsthand but were alerted to it by a delivery person.

An email sent Tuesday to residents by Rick Mason, executive director of management at the Brodsky Organization, which owns the Midtown Manhattan apartment building, said two staff members inside the lobby at the time did not follow "required emergency and safety protocols," according to the Times.

"For this reason, their employment has been terminated, effective immediately," the email said.

Bragg said the workers had filed grievances with their union to contest their firing.

"32BJ is a union comprised of majority immigrant, Black and brown workers," Bragg's statement said. "We take anti-Asian hatred, and all forms of discrimination, seriously. 32BJ members are immigrants and people of color themselves, subject to much of the same racism and violence that our AAPI neighbors face."

Authorities previously confirmed to PEOPLE that Elliot, 38, was on lifetime parole following his November 2019 prison release after his conviction for fatally stabbing his mother. Sources said he had been living in a hotel that had been converted into homeless housing amid the COVID-19 pandemic, and that the hotel is located near West 43rd Street and Ninth Avenue, where the attack occurred.

It was not immediately clear if Elliot had entered pleas to the charges against him, or was represented by an attorney who could comment on the allegations.